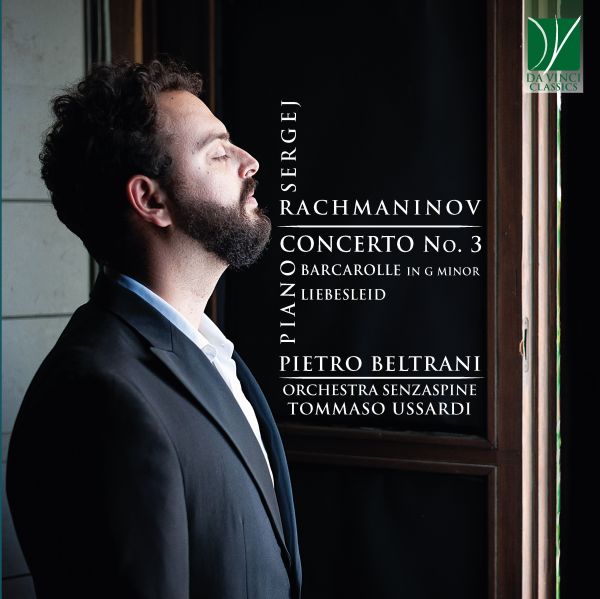 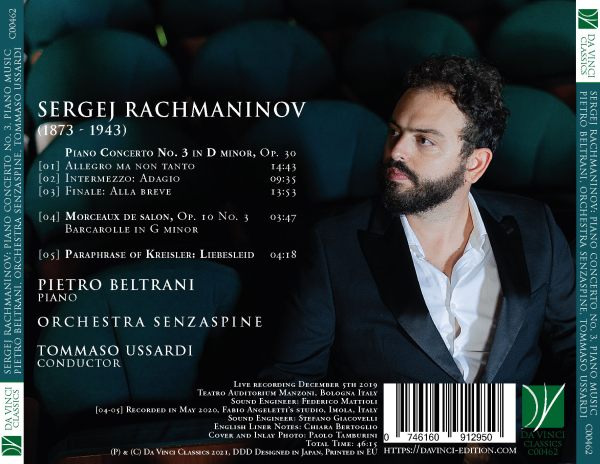 Orchestra Senzaspine: founded in 2013 by Tommaso Ussardi (president) and Matteo Parmeggiani (vicepresident) and today it has more than 450 musicians from all over Italy. Senzaspine aims to give back classical music to the audience‘s love and give to young musicians concrete professional opportunities. In seven years of life Orchestra Senzaspine has changed stereotypes and has revolutionized the normal perception of classical music. Today the orchestra has to his credit more than 400 concerts and collaborations with many international soloist as Enrico Dindo, Domenico Nordio, Anna Tifu, Laura Marzadori. From 2015 the orchestra has its own seat at Mercato Sonato in Bologna, in which was made a great intervention of urban regeneration, unique in Europe.

Pietro Beltrani: Pietro Beltrani was born in 1989 and he studied piano with Mº Giorgio Farina.
After the graduation with honours at “G.Rossini” Conservatory in Pesaro (Italy), he studied at the prestigious Piano Academy “Incontri col Maestro” in Imola (Italy) with Mº Franco Scala and Mº Piero Rattalino. He’s been awarded in many national and international competitions. He played in the most important Italian halls and theatres, like Teatro “La Fenice” di Venezia, Parco della Musica in Rome, Teatro Comunale in Florence, Teatro Manzoni in Bologna, Sala “Puccini” of the Milan Conservatory, Teatro Vittoria in Turin. He took part in the best Italian Festivals, like MiTo, Maggio Musicale Fiorentino, Bologna Festival, Emilia-Romagna Festival. He made his debut in some prestigious international halls, like Tbilisi State Conservatory Recital Hall (Georgia) and Carnegie Hall (New York,USA). In 2019 he made his debut with Rachmaninov Concerto n. 3 in Bologna at Teatro Manzoni.

Tommaso Ussardi: Composer and conductor, Tommaso Ussardi, graduated with honors in Composition, Choral Conducting and Orchestral Conducting. He attended several masterclasses with well-known Maestros such as C.A.Grandi, C. Landuzzi, S. Colasanti, L. Acocella, D. Pavlov, D. Renzetti. In summer 2017 and 2018 he was selected as an active student at the Accademia Musicale Chigiana in Siena at the masterclass of Maestro Daniele Gatti.
He won the Galletti Prize 2011, the Zucchelli Prize 2013, the Magone Prize 2015 and 2016, the Honorable Mention at the "Premio Nazionale delle Arti 2013" (National Award of the Arts 2013). He conducted various international orchestras and ensembles including the Orchestra and choir of Teatro Massimo in Palermo, Philarmonic Orchestra of Teatro Comunale in Bologna, Orchestra of Teatro Lirico in Cagliari, the Italian Youth Orchestra, the Orchestra and Choir of Teatro Comunale in Bologna, the Orchestra Senzaspine, the Orchestra Sinfonica Abruzzese, the Orchestra " I Pomeriggi Musicali ", Orchestra of the Opera Rouen Normandie, the Vidin Phylarmonie Orchestra, the Ensemble contemporain de Lyon, the Ensemble Res Humana, Ensemble Istantanea.
From 2017 he collaborates with internationally well-known artists such as Enrico Dindo, Salvatore Sciarrino, Silvia Colasanti, Laura Marzadori, Sofya Gulyak, Dejan Bogdanovich, Alessandro Fossi, Carlo Boccadoro Jonathan Roozeman ,Anastasiya Petryshak , Anna Tifu, Silvia Chiesa, Maurizio Baglini, Pietro Beltrani and Domenico Nordio.
In October 2015 he made his operatic debut conducting the opera Gazza Ladra by G. Rossini and Elisir d’amore by G. Donizetti at Teatro Duse in Bologna, in collaboration with Bologna Festival, in 2018 he conducted the Barbiere di Siviglia by Rossini at Teatro Duse in Bologna in collaboration with the baritone Bruno Praticò with the direction of Giovanni Dispenza.
In January 2018 he made his debut at Teatro Massimo in Palermo conducting Serva Padrona by Pergolesi with the resident orchestra of Teatro Massimo under the direction of Roberto Catalano.
In September 2018 he debuted in the Opera and Ballet Season 2018 of Teatro Massimo in Palermo in a ballet by choreographer Carolyn Carlson, and in 2019 with “Siciliana” by choreographers Kor’sia.
In 2021 he will debut with the Antonio Gades ballet company in a show named “Fuego” on the music of “El amor brujo” by M. De Falla conducting the orchestra of Teatro Lirico in Cagliari.
Since 2015 he has participated every year as stage assistant and director at the tourneè of the Teatro Comunale of Bologna in Japan under the guidance of Maestro H. Yoshida.