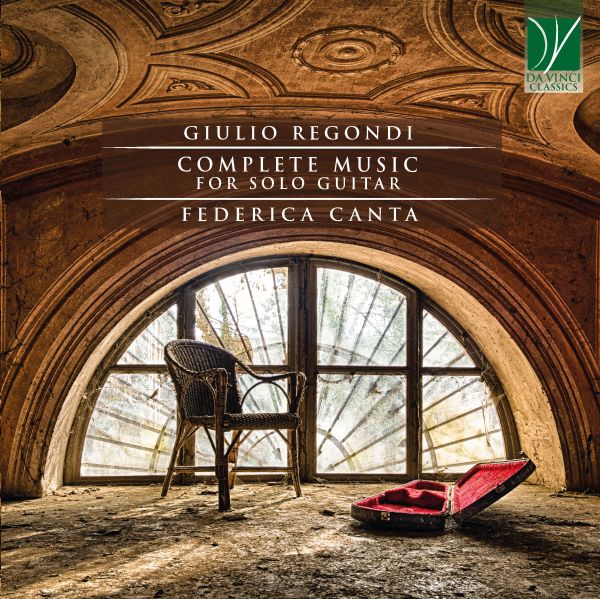 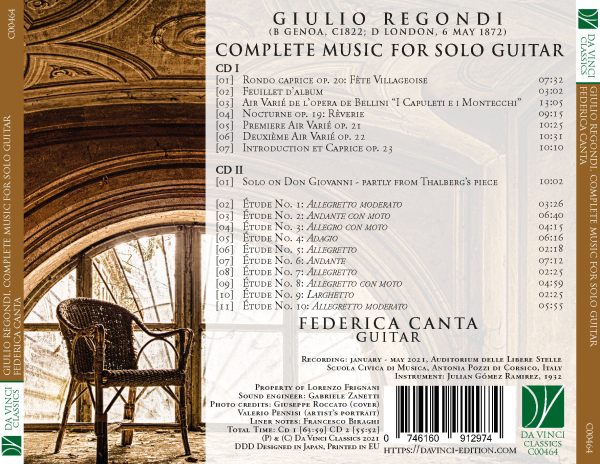 A few more words are needed to cite the recently rediscovered Feuillet d’album: it is perhaps the less complex work in the programme, but it is still perfect in its synthesis. Finally, the two further rediscoveries, found in a manuscript copy within an English collection, i.e. a Fantasia on themes by Mozart and an Air Varié on themes by Bellini. The Mozart-inspired Fantasia is a partial transcription after an analogous piano piece by Thalberg: this reveals much about the models of musical writing towards whom Regondi directed his attention (and this is true also of the Bellinian work). An introductory Larghetto, already rather complex, is followed by the extremely famous theme Là ci darem la mano from Don Giovanni, then by two Variations, by an Intermezzo (Andante) and by the fireworks of the Finale. The work based on L’amo tanto e m’è sì cara from Bellini’s I Capuleti e I Montecchi is very similar. Here, the set of the thematic elaborations contains four Variations, closed by a Finale which is no less fiery than that of the other Fantasia. It has been demonstrated that these two works precede, in the chronology of Regondi’s publication, the group constituted by op. 19-23. Their scoring, in fact, is not as innovative and elaborate as that of the master pieces commented above, i.e. opp. 19 and 23. The technical demands are however always of a high level, and remain as the distinctive traits confirming that all of these pieces came from the pen of a rarely-found talent.

The present notes can only be closed with a curious reflection, generated by Regondi’s biographic story. It seems in fact beautiful that the music by Giulio Regondi – an unhappy child and an unlucky adult – are “rocked”, as it were, on this discographic occasion, by two female hands: it is almost a small compensation owed to him by Fate. The missing mother, and the difficulty in relating with the female universe experienced by Regondi also as an adult, find today a moment of reparation and serenity, which the composer certainly lacked during his life. We therefore plaud with special affection to the Christening of Regondi’s complete works interpreted by Federica Canta, wishing to them both the best possible fate.
Francesco Biraghi
(Milan, February 2021)

Ramirez Julian Gomez (Madrid 1879-Paris 1943)
Julian Gómez Ramirez was born in Madrid in 1879. He began his apprenticeship under Agustín Andrés around 1892; his teacher moved to Paris, in Rue de Pateaux n. 7, around 1908.
Already in 1910 Ramirez appears as an employee of José Ramirez I. Although he was no relative of the Ramirez family, his descendants claimed for him the status of a disciple of Ramirez I. According to Robert Bouchet, Julian told him that he had worked for Manuel Ramirez before moving to Paris (around 1914 in Rue Rodier 38), where he remained until his death, happened during World War II in 1943. Around 1936, Julian Gómez Ramirez befriended Robert Bouchet (1898-1986), who would later become a constant visitor of Julian’s tiny, dark and chaotic workshop; Julian encouraged him to become a luthier in turn. In spite of the narrow conditions imposed on the luthier’s work by his small shop, Julian Gómez Ramirez created many guitars of a good and genuine quality. Many of his appreciators and several musicians owned and employed his guitars, including guitarist Ida Presti (1924-1967) and her husband Alexandre Lagoya (1929-1999). He can be considered as the founder of the French guitar-building school of the twentieth century, along with Robert Bouchet and Daniel Friederich (1932-2020); however, since he was not French-born, history unfortunately relegates him to a background position.

The Fête Villageoise op. 20, instead, has the role of Cinderella within this group of five works, being decidedly the less frequently performed among them. Still, the Rondo form is perfectly employed, and the rural setting is no less authentic.
Let us come, however, to the “apogee of the Romantic guitar”, as the Dieci Studi are aptly defined by the famous scholar, teacher and composer from Vercelli, Angelo Gilardino. Here Regondi reaches a happy synthesis between musical content and technical value. This is a sublime and rarely found feature: Segovia identified it, in his introduction to his edition of Sor’s Etudes, in the piano Etudes by Chopin or in the harpsichord Sonatas by Scarlatti. Actually, in these ten pieces of a self-evident beauty, challenges abound for both hands. All of the Etudes have something new to say, and all require an uncommon technical solidity on the performer’s part. From the gentle and linear No. 1, to the vibrating and dramatic No. 2, to the serene and lively No. 3 we reach No. 4, long and complex, the technically transcendental No. 5, the beautiful No. 6 with its melancholic key of D minor, or else No. 7, intricate and with a pianistic flavour, No. 8, warm and expressive, up to No. 9, peaceful and tranquil, or No. 10, intrepid and heroic.

Federica Canta: Born in Milan in 1991, Federica Canta discovered the classical guitar world at the age of ten.
Following her Cum Laude graduation at the “G. Verdi” Conservatory in Milan with Paolo Cherici (June 2013), she studied with Francesco Biraghi in the same institution, obtaining the Second Level Academic Degree with highest marks Laude and Honors (October 2016) with the Recital and the written thesis “Italian Capricci through the centuries”. In June 2017 she got her Master in Performance Practice with High Distinction at the Koninklijk Conservatorium of Brussels, where she studied with Antigoni Goni, and a Postgraduate in Music in June 2018.
Between 2010 and 2013 she attended the prestigious “Giulio Regondi Guitar Academy” in Milan with Andrea Dieci and Bruno Giuffredi. Federica has attended masterclasses given by Giulio Tampalini, Lorenzo Micheli, Matteo Mela, Carlo Marchione, Elena Papandreu, Margarita Escarpa, Pavel Steidl, Marcin Dylla, Leo Brouwer, Sergio and Odair Assad. During her concert activities, she focused her attention on the romantic repertoire for guitar, on modern and historical instruments too, stimulated by the profound passion of her teacher Francesco Biraghi. In 2014 she played in the big hall of the Conservatory G. Verdi in Milan for the production “Don Pasquale” by G. Donizetti and in September 2018 she collaborated with the Academy Orchestra of Teatro alla Scala in Milan for the Opera “Alì Babà” by L. Cherubini.
Federica performed for some of the most important Guitar Societies in Italy, Belgium, Germany and United States.