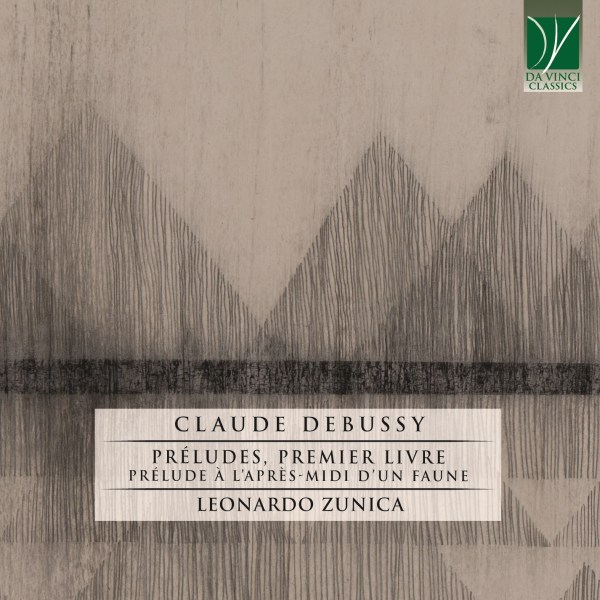 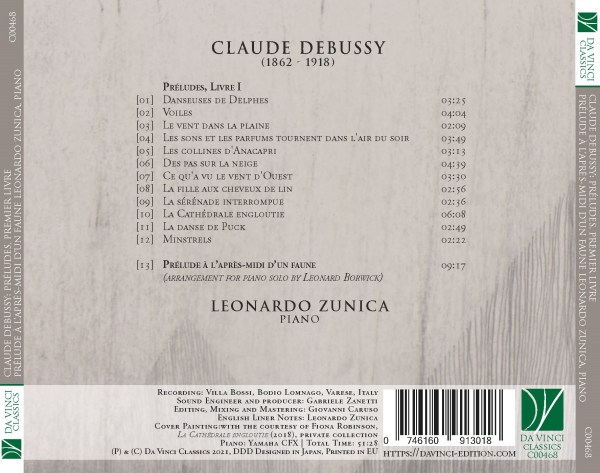 There is very scanty information about British pianist Leonard Borwick (London, 1868 – Le Mans, 1925). Counted among Clara Schumann’s best students, he is memorialized by Aldous Huxley in one of his articles of musical criticism.
Borwick was one of the first musicians in Europe who included works by Debussy in his recitals. From the British pianist’s affinity with the music of the French composer were born the piano transcriptions of Prélude à l’après-midi d’un faune and of Fêtes excerpted from Nocturnes (this piece appears in a 1937 recording by Emil Gilels).
Borwick entrusted the première of his transcription of the Prélude to pianist Mark Hambourg (Bogučar, Russia 1879 – Cambridge 1960). Hambourg was a friend of Ravel (the world first recording of Ondine is played by him) and very probably met Debussy as well. The recording of Hambourg’s interpretation is easily available on the web.
The real piano première of Debussy’s Prélude, however, can rightfully be indicated as the one given by Debussy himself on his Pleyel piano in 1891, on the occasion of his meeting with Stéphane Mallarmé. It is the composer himself who reports the words of the poet, with his “fateful air, and bedecked in Scottish plaid”. In Debussy’s words, “After hearing the work he remained silent for a while, then finally said to me: ‘I never expected anything like that! This music extends the emotion of my poem and sets the scene with far more passion than the colour does’”.
The cycle of Debussy’s Préludes was created as a complete series, even though there is no historical evidence for Debussy to have prescribed a complete performance of the first or of the second book. Still, the Preludes’ order corresponds to a logic of accurate narrative alternations, with juxtaposition of dynamics, agogic and tonal connections.
The First Book was completed between December 1909 and February 4th, 1910; the first performances, played by Debussy, date from May 25th, 1910 (in the case of Preludes I, X, XI) and March 29th, 1912 (Preludes IV, V, VII, VI, XII). The critics have long debated on the preeminence of “impressionist” and “symbolist” elements in the music of Debussy, who – as it is well known – had disapproved of all attempts to have his works so labelled. In the Préludes, his diffidence towards what is well-defined – and possibly a greater predisposition towards abstraction, that will later characterize the Etudes – leads the composer to place the titles at the end of each piece, between parentheses and preceded by ellipses.
Elements from both poetical styles constantly emerge in his piano music. On the one hand, the interest for the atmospheric and “naturalistic” element (in which the presence of human beings is minimal, as in Monet) appears as an “impressionistic” constant in Debussy’s music (Vladimir Jankélévitch would speak of meteorography). On the other, the feeling for an unheard-of mystery, along with the unfathomable depths pouring forth from his music refer to the symbolist universe. Debussy’s capacity of letting an extraordinary complex of musical and extra-musical elements merge in a multisensory musical experience concurs to establishing his greatness.

II. (…Voiles)
The word Voiles can be translated both as “sails” (which would suggest a marine setting) and as “voiles”, perhaps referring to the spectacular dances presented in those years by Loïe Fuller in Paris. The B-flat of the Danseuses is transformed here into a mysterious ostinato in the low register. Here the sails or voiles are portrayed by groups of scales and whole-tone chords, up to the central climax, possibly a remembrance of the Javanese gamelan. Voiles ends with a lonely interval of major third, as if intending to seal the idea of a music which begins from and ends in mystery.

III. (…Le vent dans la plaine)
The piece’s title is excerpted by a line by eighteenth-century dramatist C. S. Favart, used by Debussy on another occasion, as the motto for the first of his Ariettes Oubliées: “Le vent dans la plaine suspend son haleine”. The wind’s “breath” (another example of meteorography) is translated, starting once more with a B-flat, into a figuration of light and feverish sextuplets based on a trill of minor second, on which a somewhat disquieting tune insinuates itself. After the thunderous gushes of the central section, the Prelude progressively fades up to the laconic final notes.

IV. (…«Les sons et les parfums tournent dans l’air du soir» Ch. Baudelaire)
Inspired by a line of Harmonie du soir, after Les fleurs du mal, the Prelude opens as a slow waltz in A major – the valse mélancolique evoked by Baudelaire in his poem. The valse’s pace is lost and found again, as if underpinning the feeling of circularity suggested by the title’s “tournent”. The Prelude shares in the intoxicated atmospheres of Baudelaire’s lines, and, possibly – as suggested by Walsh – in the atmospheres imagined by Debussy for La chute de la maison Usher by Poe. The distant horn calls announce, similar to the enticing call from a parallel reality, the piece’s ending.

V. (…Les collines d’Anacapri)
Les collines d’Anacapri was among Debussy’s favourite Preludes. It evokes, with its luminous key of B major, the Mediterranean atmospheres of the island where, actually, the composer never set foot. In his complete edition of Debussy’s works, R. Howatt reports about the uncertain rumours concerning the possible inspiration taken by Debussy from the label of a wine bottle. The piece’s beginning suggests the tolling of far-away bells, before animating itself in the irresistible vitality of a tarantella rhythm. In the central part the tune of a folksong appears: together, they constitute a very evocative synthesis of the Italian soundscape.

VI. (…Des pas sur la neige)
The lively intoxication proceeding from Les collines is violently annihilated by one of the most silent pages within Debussy’s entire output. From the chaotic clamour of the Mediterranean we get to the icy silence of a “background of a sad and iced landscape”, as written by Debussy himself for the performers, with reference to the two-note motif looming over the entire piece. This motif (almost an iced contraction of a rhythm with a vaguely Spanish shape) is superimposed to fragments of melodic lines, sometimes as laments, sometimes as regrets, coming from a place where time seems to be suspended.

VII. (…Ce qu’a vu le vent d’Ouest)
Placed in the midst of the collection, Ce qu’a vu le vent d’Ouest is the most technically challenging Prelude. With its evident references to Liszt’s piano writing, it is one of the most spectacular pieces within Debussy’s entire piano output. Debussy’s source, as reported by Robert Walsh, is a tale by H. C. Andersen, by the title of The Garden of Paradise. The West Wind, encountered by the Prince who is the story’s protagonist, recounts that he is come “from the forest wilderness” and from places “where people seem unnecessary”: “I turned somersaults across the plains, stroked the wild horses, and shook cocoanuts down from the palm trees. Yes indeed, I have tales worth telling, but one shouldn’t tell all he knows”.

VIII. (…La fille aux cheveux de lin)
After two episodes that – one could say – describe from opposed but complementary angles the mystery Debussy so sought (and created), this Prelude represents a moment of such a lyrical intensity that it counterbalances the preceding ones, almost intermezzo-like. Although it is inspired by a poem of Leconte de Lisle, the Prelude and the poem – as remarked by many scholars – have little in common with each other. Rather than offering us a musical narrative of the literary content, Debussy seems to give us, in the soft key of G-flat major, a third Arabesque evoking the archaicizing atmospheres and the curvilinear motifs of a Pre-Raphaelite painting.

IX. (…La sérénade interrompue)
Debussy spent just a few hours in Spain, in 1880, in order to watch a corrida in San Sebastian. As stated by Lesure, his encounter with Iberian music happened during the Universal Exposition of 1889. Moreover, the friendly relationships between Debussy and Albeniz, De Falla, Granados, and his favourite pianist Ricardo Viñes were also fundamental. Debussy’s “Spain” is characterized by strong contrasts of light and shadow. In the Sérénade, a guitarist tunes his instrument and throws himself into the performance of a touching and melancholic serenade. He is interrupted, however, at first by the noise of closed shutters, later by another singer (a competitor?), then… by a self-citation of Debussy’s Le matin d’un jour de fête from Iberia.

X. (…La Cathédrale engloutie)
This Prelude is inspired by the famous Breton legend of the city of Ys, engulfed by the sea. It is possible that Debussy got to know it through the opera by E. Lalo, Le roi d’Ys, or through the novel by Maupassant, La Légende de Ker Ys (1883). It is said that even nowadays, when the sea of the Breton coast is calm, one could perceive the sound of the bells of the Cathedral Church of Ys. In the Prélude, Debussy evokes precisely the submarine tolling of the bells, and then the organ chords, mounting majestically from the depths while the city emerges, until they are once more swallowed by the sea.

XI. (…La danse de Puck)
The mythologic character of Puck owes his celebrity to A Midsummer Night’s Dream by Shakespeare, one of the authors Debussy loved most. It is possible, however, as suggested by Howatt, that the composer also knew Rudyard Kipling’s Puck of Pook’s Hill. In 1903, in an article printed on “Gil Blas”, Debussy described Puck as a “cheerful night wanderer, shrewd and mischievous, a pleasant buffoon”. These are actually the features impressed into a score capable to grasp the evolutions of a spirit who is “capable, at the same time, of descending suddenly to earth as well as of disappearing in space with a beating of wings”, as has been written.

XII. (…Minstrels)
The collection closes with a humorous piece, as if the composer wished to put at a distance, with an ironic gesture, the abysmal depths and the unpeopled landscapes with no men evoked until now. The spirit of the music hall comes in, together with that of the performances of the famous blackface actors seen by Debussy on the boardwalk at Eastbourne, in England, in 1905. Debussy takes leave entrusting himself to the coups de théâtre and to the rapid juxtapositions of contrasting and heterogeneous elements, as it is typical for the cabaret, in a kind of cinematographic editing.
Leonardo Zunica © 2021

Leonardo Zunica, piano: Born in Mantua Leonardo Zunica studied at the Verona Conservatory, at the Hochschule fur Musik Vienna. at the Moscow State Conservatory, at the Bergamo Music Academy. His teachers include Renzo Bonizzato, Virginio Pavarana, Alfredo Speranza, Kostantin Bogino, Lev Naumov, Irina Chukowskaya. Guest in national and international festivals as a soloist and chamber musician, Leonardo Zunica has performed in Italy, France, Spain, Scotland, Finland, Ukraine, Croatia, Switzerland, Russia. Interested in contemporary music he curated the first performances of music by Luigi Manfrin, Gabrio Taglietti, Eero Hämmeeniemi, Evgen Stankovich, Corrado Rojac. His activity includes collaborations with the Ukrainian violinist Oleksandr Semchuk, the clarinetists Anton Dressler and Gabriele Mirabassi, the finnish pianist Maria Ala-Hannula (Ebony piano duo), the cellist David Cohen, the saxophonist Federico Mondelci, the musicologist Sandro Cappelletto. He has collaborated as a soloist with orchestras such as the Verona Arena Orchestra, I Virtuosi Italiani, the National Orchestra of Ukraine. With Paolo Ghidoni and Antonio Mostacci he is part of the Trio of Mantua.