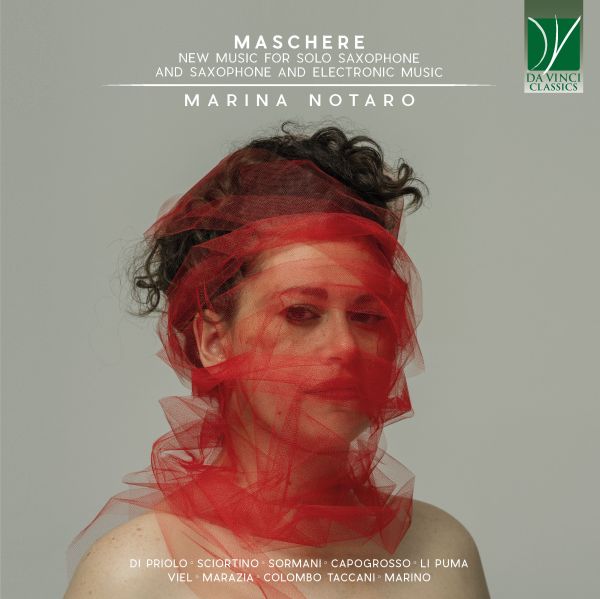 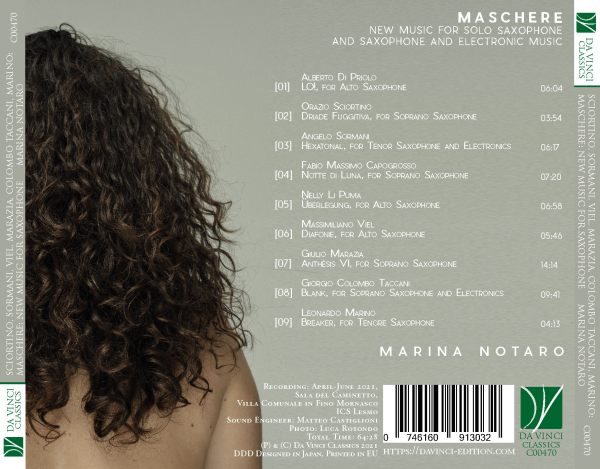 Maschere is a project composed of unpublished works for solo saxophone, or for saxophone and electronic music.
The idea was born out of the need of enriching the contemporary “made in Italy” repertoire for the saxophone. It is characterized by an innovative language, going side by side with the evolution of instrumental technique.
The nine composers who collaborated for the realization of Maschere belong in the panorama of Italian contemporary music. Each of them has his or her own background, enriched by a continuing experimentation and musical research: for this reason, the pieces all have different features, styles and languages.

ALBERTO DI PRIOLO
Being a saxophonist myself, when I write for my instrument, I feel the need to employ its idiomatic possibilities, as have been explored in the last decades, without however letting them prevail over the expressive content of music itself.
In Lo!, the use of the saxophone’s extended techniques has been the direct consequence of my attempt to explore the vocal style of Jeff Buckley, so rich in diverse timbral nuances, both extremely agile and visceral at the same time. The characteristic improvisational style exhibited by that singer in his concerts, joined to the style – fixed on paper – of composer Giacinto Scelsi, have had a decisive role in channeling my personal quest towards improvised music, from which I drew in order to compose this piece. (AdP)

ORAZIO SCIORTINO
Fleeting, unquiet, melancholic, a Dryad leaves the half-light of the woods, in quest of a mortal spirit with whom to unite herself. Ungraspable for her beauty, the Nymph becomes, for a composer, the generating cell of a composition. From her the panting plot germinates in an ingenerated and unending time. (OS)

ANGELO SORMANI
As highlighted by the title, the piece is built on a hexatonic scale. Its principal feature is the alternation of the two hexatonic ranges contained within the interval of an octave. In the piece’s first part, these two ranges are very dilated and distinct. From the central part to the end, the alternation intensifies, almost creating a convergence; this feature acquires a fundamental meaning for the entire composition. The electronic component supports, embraces and increases the itinerary of the solo instrument. (AS)

FABIO MASSIMO CAPOGROSSO
I composed Notte di Luna, in its original version for solo flute, in 2018, upon a commission by the Accademia Filarmonica Romana.
The piece is inspired by the eponymous painting by Wassily Kandinsky. It attempts to evoke its colours and shades, its dreamy atmosphere, and the motifs of the Russian fairy tales living in the painter’s imagination.
The foundational element of my work is the absolute freedom of performance entrusted to the player. For this reason, when Marina Notaro asked me to contribute to her project, I had no doubts as regards the choice of this piece.
There are no metronomic indications or bar numbers, and the formal and expressive construction is shaped by the performer’s aesthetic sensitivity. The breathing, pauses, air, all constitute a further, non-renounceable element in the structure of this musical work of mine. (FMC)

NELLY LI PUMA
The piece I dedicated to saxophonist Marina Notaro has been written with the purpose of exploring the technical and sound possibilities of the alto sax. Its title, Überlegung (“reflection”), refers to the slow moments of the piece, where intervals of an ascending or descending augmented fourth break the flow of rapid passages made of repeated notes, sound waves and randomized musical lines. (NLP))

MASSIMILIANO VIEL
Diaphony. In the systems of telecommunication, recording and reproduction, this term (also known as crosstalk) indicates the interference caused by the transferred sound signal due to undesired coupling with other channels of communications.
Diafonie, for alto sax, was created by reformulating a piece of 2004, i.e. the IV Fragment of Heterodyne for solo clarinet. It is the imaginary reconstruction of an electromagnetic soundscape, i.e. of what it is possible to receive with a radio in amplitude modulation (AM), tuned on medium waves. And lo, there present themselves Morse signals, noises in broadband, fragments of automated messages and other events, difficult to identify. On this sea, made of shreds of communications, unintelligible for us, a clearer signal stands out. In the clarinet version, it is identified as a message projected into infinity, in the hope that it may be received, one day, by the dedicatee.
It is therefore a naturalism of the machine. Almost as happens to the blackbird who is the protagonist of Olivier Messiaen’s Merle bleu – singing in a cave facing the stormy sea – here a signal with a mysterious codex and meaning is addressed to us. It overcomes the cliffs of the interferences, and becomes, diaphonically and crosstalk-wise, from a coded message to music. (MV)

GIULIO MARAZIA
My pieces by the name of Ánthēsis (Greek: flowering) are works for solo instruments, each time a different one. They have the aim of exploring all of the linguistic individualities of an instrument, the possibility of turning language into matter, the corporeality of each instrument. Musical instruments thus become characters, with whom the composer identifies himself, with his capability to observe and to shape the complexity of each aural production. Every composition is tailor-made, from the beginning, on the features of a precise performer.
Ánthēsis VI for soprano sax is a long melody. Like almost all melodies, it implies redundancy, symmetries, transformations and returns. A constant transformation between two diverse intervallic fields is developed here: one is made of six notes (F, A-flat, D, B, G-sharp, A-natural), which tend to appear always in the same range, and the other is made of five notes (G, A-flat, F, D and A-natural), which instead always appear in different registers. From these two intervallic fields derives a musical cryptogram where the name of the performing dedicatee, Marina Notaro, is contained. (GM)

GIORGIO COLOMBO TACCANI
Blank was originally born by combining tarógató with electronics, thanks to a commission of the German soloist Nikola Lutz. The presence of tarógató, fascinating as it is, does not promote the piece’s wide dissemination. However, counting on the great timbral affinities and on the coinciding range of the tarógató and soprano sax, I welcomed with great pleasure Marina Notaro’s proposal, i.e. to realize a second version of that piece for this new solo instrument. In a narrative plot which remains substantially unchanged, the instrumental part alternates strongly energetic parts – certainly prevailing in the course of the piece – with zones of melodic distension, at times freezing in immobile held tones. The electronic component – as is usual for me in similar situations – is derived, in a very high percentage, from samplings of tarógató, elaborated by myself employing varied techniques of treatment. The results are perfectly suited for combination with the sound of the soprano sax. (GCT))

LEONARDO MARINO
The title, Breaker, has a twofold meaning. The first is nothing else than a reference to the great saxophonist Michael Brecker, and a homage to his unforgettable instrumental style. The second, instead, is bound to one of the meanings of the English word breaker, i.e. hammer. The rhythmical and insistent repetition of the note D brings this image back to one’s mind; it thus realizes a dynamic background in which are set the varied figures, of a jazz derivation. The piece is to be played and listened “in a single breath”, in order to better appreciate the vortex of tension characterizing it. (LM)

Giulio Marazia: he was active student of Maestro Gianluigi Gelmetti at the prestigious Accademia Musicale Chigiana in Siena, where in 2011, he won a major scholarship. As a conductor he was invited to festivals and concerts in Italy and abroad performing at the Teatro Mercadante in Naples, the Teatro Piccolo, Teatro Dal Verme, the Auditorium Cariplo and the Sala Verdi in Milan, the Teatro Uno of Rome, the Teatro dei Rozzi in Siena, the Auditorium Oscar Niemeyer in Ravello, the Roman amphitheater of Avella (Av) the Volkshaus in Jena (Germany) and the Opéra Royal de Wallonie in Liège (Belgium).
In 2013 he was chosen by the Milan Conservatory to represent the institution at the “Premio Nazionale delle Arti” of Conducting organized by the Italian Ministry of Education, University and Research and held in L’Aquila at the local conservatory.

He has directed several times in various concerts held in the Italian Wind Orchestras of Chieti, Gioia del Colle (Ba), Mercato San Severino (Sa) and Salerno.
Musical and Artistic Director of Orchestra Sinfonica Ensemble Contemporaneo and Coro Collegium Vocale Salernitano from 2006 to 2013, At the head of these artistic forces, with a comprehensive and ambitious project, also he designed and produced annual music festivals, suggesting the spread and culture of classical music, symphony and opera live.
For the “Valle del Sarno Pop Orchestra” has arranged, transcribed and directed the music for the concert event “Atom at night” dedicated to the major successes of Pink Floyd interpreted with symphony with over one hundred musicians involved. In 2014 he made his debut with the “Orchestra I Pomeriggi Musicali” of Milan as a guest conductor for a series of concerts.

He inaugurates the academic year 2014-2015 with the opera “Don Pasquale” by Donizetti at the helm of the complex Choir and Orchestra of the Conservatory of Milan. From 2014 Assistant Conductor of the Teatro Verdi in Salerno, with the artistic direction of Maestro Daniel Oren. In the 2015 debut as Guest Conductor of “Metro Chamber Orchestra” in two concerts in New York, scheduled the Passion According to St. John of J. S. Bach, which has earned him the appointment by the 2015-2016 season of principal guest conductor. From 2015 Assistant Conductor of the Opera Royale de Wallonie in Liegi, with the artistic direction of Maestro Paolo Arrivabeni.

He worked with leading orchestras throughout Europe including the Orchestra Giuseppe Verdi of Milan, the Sofia Festival Orchestra (Bulgaria), the Jena Philharmonic Orchestra (Germany) and the choir and orchestra of the Opera of Liège (Belgium). He is currently music and artistic director of the Orchestra Filarmonica Campana with whom he started a new phase, characterized by a growing national and international interest aroused by new productions, tours, recordings and audiovisual projects. These activities have projected the Filarmonica Campana in the global market, where today plays an important role in the promotion of Italian musical culture. He is a teacher of Music Education in Milan.

Prizes: “Magnus Taburnus” for polyphonic Choirs (2007, conductor), “St. Alphonsus M. de Liguori” for sacred music (2009, composer with “Reflections”), “A lighthouse turned towards the future” for young people who have excelled in the field of labor, culture and art (2010), “Awards 2010” for the constant effort in the dissemination and promotion of musical culture in the area, “Premio Cavalierato Giovanile”, the best talent under thirty-five of southern Italy.