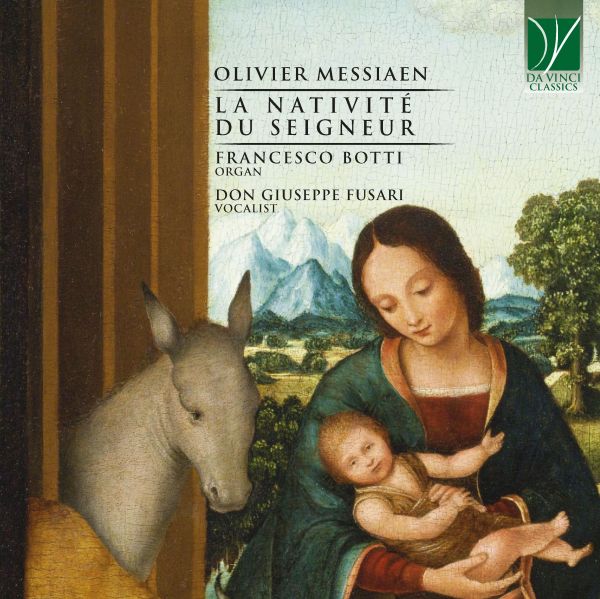 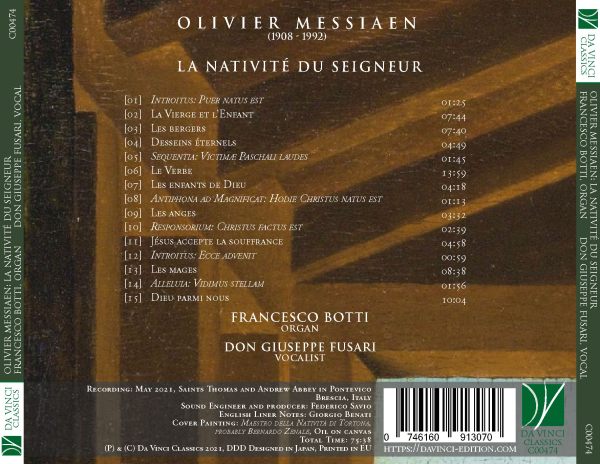 Olivier Messiaen was the titular organist in the church of the Sainte-Trinité in Paris from 1931; he would remain in that post until 1992, the year of his death. This Parisian church, located in the IX arrondissement, is provided with two historical instruments built by Aristide Cavaillé-Coll in the late 1860s. There is a principal organ, of 1867-8, situated in the choir’s balcony, in the counterfaçade. It is currently provided with 60 stops on three manuals and pedals. There is also a choir organ, of 1867, positioned on the floor under the seventh arch between the central and the left lateral naves, provided with 15 stops on two manuals and pedals.

On Monday, February 27th, 1936, at 8:45 pm, in the Sainte-Trinité Church in Paris, the “première audition” of Olivier Messiaen’s La Nativité du Seigneur was given. It is a series of nine organ meditations, which were to revolutionize the organ language. The concert was organized by the Société des amis de l’orgue, a prestigious musical reality created in 1927 by Count Bérenger de Miramon Fitz-James and by the young organist and musicologist Norbert Dufourcq, under the auspices and with the encouragement of musicians such as Widor, d’Indy, Pierné, Vierne, Tournemire and Marchal. It was presented as a “Special additional concert”, since the President and Founder of Les amis de l’orgue was highly hesitant about the idea of granting to Messiaen the opportunity of a complete recital, entirely consecrated to the Nativité. Yet, he capitulated due to the composer’s insistence. Messiaen, in exchange for the concession, renounced every engagement for ten years; he stated that he was very impatient to present his new work to the audience as soon as possible. The opportunity was granted and the Société des amis de l’orgue sponsored the event (see “L’Orgue”, Numéro special / Olivier Messiaen, 1993, pp. 8-10). Here the concert’s poster is reproduced.

In consideration of the work’s length and complexity, Messiaen decided to entrust its performance to three of his organist friends: Daniel-Lesur (1-3), Jean Langlais (4-6) and Jean-Jacques Grunenwald (7-9). The concert was completed by Messiaen’s own performance, on the organ, of his Banquet céleste.

It was a memorable soiree. La Nativité du Seigneur had the effect of a thunder in the placid world of the organ at that time. Nobody had ever written such a novel music, under all aspects: modality, rhythms, modes and combinations of stops. Messiaen himself provides us with his own reflections: “This renewal began with La Nativité du Seigneur, a work that has had great success in France and abroad. The Nativité, with its Hindu rhythms, modes of limited transpositions, and unusual timbres, constituted a great change in organ music at a time when Franck represented the summit of modernism. It has remained one of my best organ works and, no doubt, the one most often played” (Olivier Messiaen, in Music and color, p. 118).

Messiaen was painstakingly precise about every detail of his works; he required the performing artists to observe absolutely all indications in his texts. This is reported by Jean Langlais himself (Jean Langlais remembered, by Marie-Louise Langlais, Paris, 2016), who related what Messiaen wrote to him about Les Anges prior to the performance.

For the beginning there should be almost no 8-foot stops. Here’s the opening registration at La Trinité: Récit: Octavin 2, Cymbale III Positif: Principal 8, Prestant 4, Doublette 2 Grand Orgue: Prestant 4 Play on the Grand Orgue with everything coupled. Page 3, second system, second measure: the last C in the left hand is obviously natural. The final trill is for alternating hands, right hand on D-G, left hand on C-F. At the end of the trill, slow the repercussions, stopping on a staccato D-G, a comma and a period, and a dry C-F.

And, furthermore:
A sort of heavenly dance. An exultation of bodiless spirits. The piece is based on rhythms that are immediately preceded by or followed by their augmented values and additions of short values.

Timbre was for Messiaen a fundamental question in his activity as an organist. La Nativité is full of unusual combinations and of aural surprises, as in the above-mentioned Les Anges but also in various other numbers, such as no. 3 (Desseins éternels) where an embracing, dense and impenetrable sound tinges the entire musical fabric with a suffused and impalpable mist. This is sustained by the Bordon 32’ prescribed for the pedal; this stop, on the organ of the Trinité, envelops without exceeding. Certainly melody, rhythm and harmony are among the important features when analyzing La Nativité; still, it is especially timbre that provokes the greatest surprises in the listener.

Theologically, he individuates five principal ideas:
1°. Our predestination is realized by the Word’s incarnation (no. 3)
2°. God living in our midst, the suffering God (nos. 9 and 7)
3°. The three births: the Word’s eternal generation, Christ’s temporal birth, the Christians’ spiritual birth (nos. 4, 1 and 5);
4°. Description of some characters who contribute a particular poetry to Christmas: les Anges, les Mages, les bergers (nos. 6, 8 and 2);
5°. Overall, nine pieces in honor of the Holy Virgin.

Under the instrumental viewpoint, he points out that every part has a color and a timbral density of its own. The pedal goes beyond its role of bass, and frequently sings above the manuals’ parts. Great attention is devoted to diverse and unusual combinations: “opposer n’est pas mélanger”.
Musically, he points out five principal means of expression:
1°. The limited transposition modes;
2°. The pedal notes, the ornamentations and appoggiaturas are enlarged;
3°. The addition of a half value;
4°. The gradual increase in the intervals’ size;
5°. The dominant chord.

Messiaen satisfied himself fully with the boundless and imaginative world of Gregorian modality. Being an organist himself, and one who dedicated himself to the liturgical worship in a church, he could not do otherwise; however, we know that he performed his duties with a feeling of total belonging and with a sense of service, being a devout Catholic. His improvisations on Gregorian subjects, played on the Trinité’s organ, were highly appreciated: on the web, one can listen to one such improvisation on the Gregorian tune Puer natus, of masterful content and beauty. Also La Nativité du Seigneur could only – in view of its chosen destination – refer to Gregorian pieces. Let us see some of them. The tune of no. 1, La Vierge et l’Enfant, reproduces the shape of the Gregorian Introit Puer natus est. Similarly, the tune of no. 4, Le Verb, reveals its derivation from the structure of the Sequence Victimae paschali laudes.

Beyond these certain and clearly observable references we can suppose Messiaen to have thought to particular Gregorian contents even without making them explicit as in the case of the two preceding ones. In the present edition, we chose to propose some connections in ideality and content, as the antiphon to the Magnificat at the Second Vespers of Christmas Day (Hodie Christus natus est), as a joyful chant preceding no. 6, Les Anges; the Maundy Thursday Gradual Christus factus est as the ideality for no. 7, Jésus accepte la souffrance; the introit for the Solemnity of the Epiphany, Ecce advenit, as a suggestion for no. 8, Les Mages; lastly, the song of Alleluia: Vidimus stellam could not be omitted before the festive final toccata, no. 9, Dieu parmi nous.

Born in Avignone in 1908, with La Nativité du Seigneur, the twenty-eight years old Messiaen fixed the compositional groundwork for his poetic and structural world. This would lead him to the Parnassus of the great composers of the twentieth century. He fostered the evolution of the traditional technical palette, superimposing modes and tonal settings; he employed chords “contaminated” by the addition of notes; he widened the use of rhythmical values, frequently deriving them from Hindu music or natural sounds; he employed ornamentation in all parts; and, as said above, the timbral palette is enriched with unusual timbres and colors. A wonder of sounds and colors.

FRANCESCO BOTTI
Italian organist from Brescia, is born in 2000. He is currently pursuing the three-year Bachelor’s Degree in Organ and Organ Composition at the "Luca Marenzio" Music Conservatory of Brescia in the Class of Maestro Giorgio Benati. In 2019 he completed, maxima cum laude, the High School with Administrative, Finance and Marketing at the "Capirola" School of Leno (Brescia). In September 2019 he won, in his category, the 2nd Prize at the International Organ Competition of Tricesimo-Udine (with Olivier Latry, titular organist of the Cathedral of "Notre Dame" de Paris, as President of the Jury) and in October 2019 he was finalist in the "Premio Nazionale delle Arti" organ competition. Previously he was also the winner, in his category, at the National Organ Competition in Bibione (with Maestro Wolfgang Seifen as Jury President) and finalist at the Northern Ireland International Organ Competition 2018. He attended various Masterclasses with esteemed organists such as Fausto Caporali (Olivier Messiaen; Improvisation), Ton Koopman (J.S. Bach repertoire) and Olivier Latry (19th and 20th century French Organ Music). He takes an active part in the concerts of the "Bach's Opera Omnia" project, promoted by the Music Conservatories of Brescia and Castelfranco Veneto in collaboration with the Organ Class of Maestro Giorgio Benati, in various programs including the whole "18 Chorals of Leipzig" and concerts in Buffalora (Brescia), Darfo Boario Terme (Brescia) and in the Cathedral of Asolo (Treviso). He carries out an intense series of concert performances in various locations and has an extensive repertoire ranging from early music to contemporary composers. He is titular organist in the parish churches of Folzano (Brescia), Mompiano (Brescia) and Castenedolo (Brescia).

Don Giuseppe Fusari
He is a Gregorianist who has been part of the famous Nova Schola Gregoriana for thirty years and is himself the director of Gregorian ensembles. After completing his theological studies, he graduated in Modern Literature, then specializing in Art History and obtained a doctorate in History, focusing in particular on the Renaissance and the Baroque. He is an academic of the University of Brescia and was Director of the Diocesan Museum of Brescia and has several essays and volumes to his credit.

Olivier Messiaen: (b Avignon, 10 Dec 1908; d Paris, 28 April 1992). French composer, organist and teacher. He was a musician apart. The sources of his music may be traced on the one hand to the French organ tradition and on the other to the innovations of Debussy, Stravinsky and Bartók, but right at the start of his career he found a modal system that has a completely individual sound, and to this he remained true, even when he vastly extended the possibilities of his style after World War II. He was alone, too, among major 20th-century composers in his joyously held Catholic faith, which again was unswerving, however much he came to value non-European cultures, especially Indian and Japanese. As a teacher he instructed many of the most prominent composers of the next two generations.