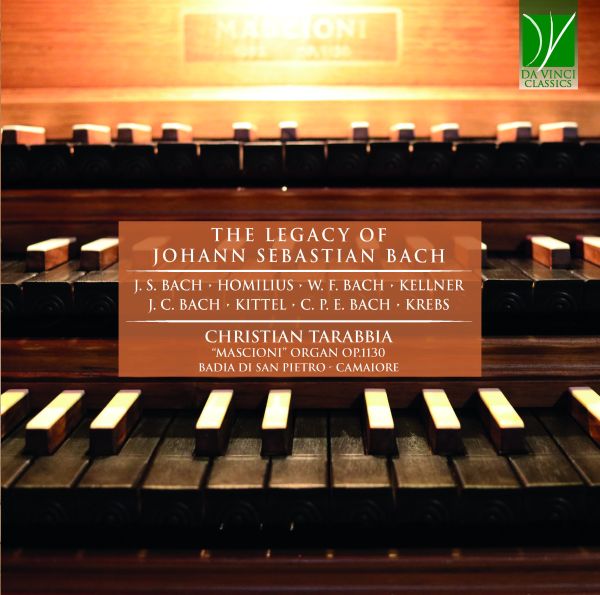 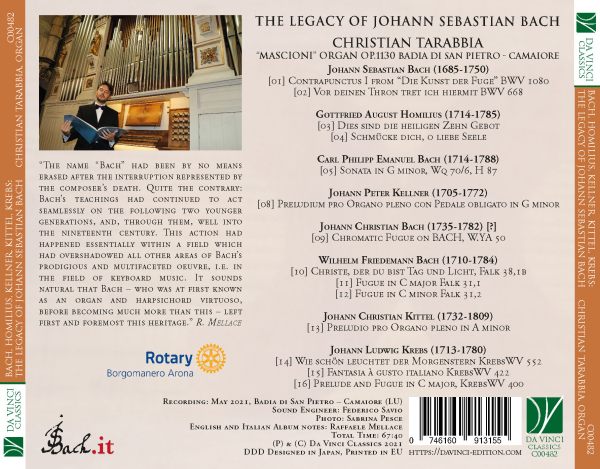 The Legacy of Johann Sebastian Bach

Johann Christian Bach (b Leipzig, 5 Sept 1735; d London, 1 Jan 1782). Composer, youngest son of (7) Johann Sebastian Bach. As a composer he was the most versatile of J.S. Bach’s sons and the only one to write Italian operas. He was an important influence on Mozart and, with C.F. Abel, did much to establish regular public concerts in London.

Johann Christian Kittel (b Erfurt, 18 Feb 1732; d Erfurt, 17 April 1809). German organist, composer and teacher. He studied with Jakob Adlung, organist in Erfurt, and from 1748 to 1750 was a favourite pupil of the aged J.S. Bach in Leipzig. After serving from 1751 as an organist and teacher in Langensalza he was appointed organist of Erfurt’s Barfüsserkirche (1756); in 1762 he transferred to the Predigerkirche there. Despite a low salary and more favourable offers from elsewhere, he remained in Erfurt for the rest of his life, seldom undertaking concert tours and even refusing an invitation in 1790 from Duchess Anna Amalia of Saxe-Weimar to travel to Italy. His fame as a virtuoso organist brought Goethe, Herder and Wieland to his evening recitals, and drew many pupils to him, of whom the most important were M.G. Fischer (his successor at the Predigerkirche), K.G. Umbreit, his nephew J.W. Hässler and J.C.H. Rinck. In 1800 he made a concert tour to Hamburg, where he remained a year while preparing his new book of chorales for Schleswig-Holstein (Vierstimmige Choräle mit Vorspielen, 1803).

Johann Ludwig Krebs: (b Buttelstedt, Weimar, bap. 12 Oct 1713; d Altenburg, 1 Jan 1780). Composer and organist, eldest of the three sons of (1) Johann Tobias Krebs. He received his first musical instruction from his father, including organ lessons as early as his 12th year. An improvement in the family fortunes enabled him to enter the Thomasschule in Leipzig in July 1726. He learnt the lute and violin, continued with his keyboard studies, and as late as 1730 was still singing treble in the choir. Anticipating that his eight years of study at the Thomasschule would end in 1734, he competed for the position of organist at St Wenzel, Naumburg, on 25 August 1733, along with his father (who later withdrew), C.P.E. Bach and five others; neither he nor C.P.E. Bach was successful. The Thomasschule therefore extended Krebs’s term, and a year later J.S. Bach summed up in a testimonial of 24 August 1735 that his pupil had ‘distinguished himself’ on the clavier, violin and lute, as well as in composition. This special recommendation undoubtedly refers to an otherwise unknown application for a post, perhaps at St Katharinen, Zwickau. During the next two years (1735–7) Krebs read law and philosophy at Leipzig University, occasionally assisting Bach at the Thomaskirche or playing the harpsichord in Bach’s collegium musicum.

Johann Peter Kellner: (b Gräfenroda, Thuringia, 28 Sept 1705; d Gräfenroda, bur. 22 April 1772). German organist and composer, father of Johann Christoph Kellner. His parents wished him to become a lamp-black merchant like his father, but he was determined to study music. He probably received his first training at the village school in Gräfenroda, where he sang under the Kantor Johann Peter Nagel; his first keyboard teacher was Nagel's son Johann Heinrich. He next studied for a year in Zella (presumably 1720–21) with the organist Johann Schmidt and then for a year in Suhl (presumably 1721–2) with the organist Hieronymous Florentius Quehl, who gave him his first composition lessons. Kellner next returned to Gräfenroda and served for three years as a tutor. On 21 October 1725 he successfully auditioned for the post of Kantor in neighbouring Frankenhain, where he remained for over two years. In December 1727 he was back in Gräfenroda, first as assistant Kantor under J.P. Nagel and later, after Nagel's death in 1732, as Kantor. He remained in this post until his death.

Wilhelm Friedemann Bach: (45) (b Weimar, 22 Nov 1710; d Berlin, 1 July 1784). Composer and organist, eldest son of (7) Johann Sebastian (24) and Maria Barbara Bach. Trained by his father and endowed with brilliant gifts, he expressed himself in the genres of his time in a sensitive and highly cultivated musical language.