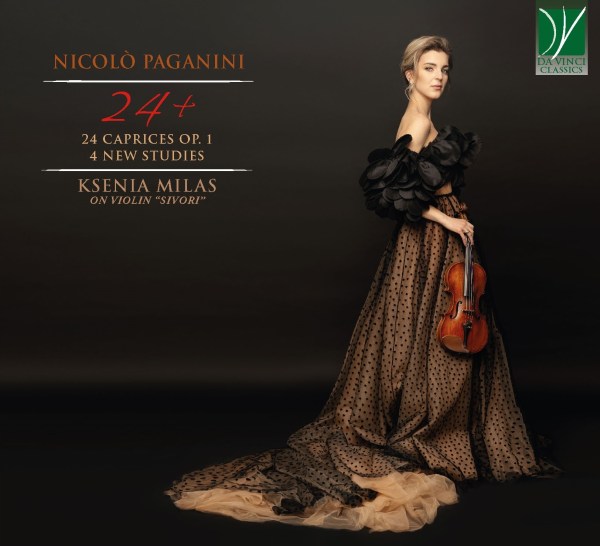 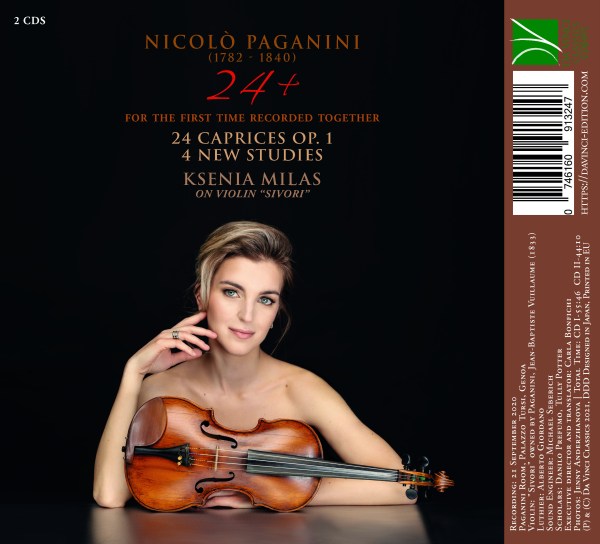 PAGANINI 24+
the birth of a cd

It was in 2018 when Ksenia took the decision to record the 24 Capricci by Paganini together with the 4 Studi discovered by Danilo Prefumo and, after investigating their history, philology, compositive pattern, lyric-harmonic and executive features, after having performed all the 24 Capricci in various recitals. Her studies brought her to consider each Capriccio for its own specific compositive and executive characteristics, connecting at the same time one Capriccio to the other: that’s why she performs them in an innovative sequence whose purpose is to emphasize the stylistic and harmonic similarities which reveal the composer’s personality in his research of sonorities linked to the technical virtuosity and the sound effects of the instrument.
The recording took place on September the 21st 2021 in Genoa, in the Paganinian Violins Room of Palazzo Tursi, with Ksenia playing one of Paganini’s violins, the “Sivori”, after long talks with the Local Authority lasted one year – these instruments are part of the artistic Italian heritage subject to protection – at the presence of the luthier Alberto Giordano, the Museum Curator Raffaella Besta and the Local Police. Astonishingly, the recording session took place in one single day, from 10 a.m. to 4 p.m.
With intense attention, Ksenia followed all the steps taken by the luthier in opening the violin’s glass-case, cleaning and tuning it, then he handed the violin over to her and she took it into her hands, with clear and strong emotion while starting to play it. She was calm, serene and very focused, the tension of the previous days seemed to have faded away. She took off her shoes and stepped on the wooden floor of the room with her socks on so as to prevent the classic creaking of antique floors. Her slender body outshined the room while her petite fingers moved with skill on the “Sivori”, as if it had been hers and she had always been playing it.
When we handed the recorded files over to the sound engineer Michael Seberich, he almost couldn’t believe that she had recorded all this huge and hard work in one single day, and he verified the dates and times of the files. Ksenia had, once more, decided to use the first recordings, without cuts, as in a live recital. ‘Good first take’!
This CD, “24+”, is meant as a Russian violinist’s homage to Paganini and his home town Genoa. His op. 1 is considered to be the most brilliant and famous composition in violin history; through his challenge “Alli Artisti”, he succeeded in arousing and exalting the imagination of the most renown composers of the following centuries, but also the strength and the persistence of those few violinists who have tried out these grand and demanding compositions. Ksenia says: “My favourite Capriccio is the No. 4, as, more than all, it conveys the lyric and romantic personality of the composer, beside being the most difficult.”
Two anniversaries should have been celebrated in 2020: the 180 years from Paganini’s death and the 200 years from the publication of his masterpiece, the Capricci op.1. Unfortunately, all of this has been postponed but “I am very happy and proud for managing to honour him with this CD, even if one year late”, Ksenia says.

In the 24 Capricci for solo violin op. 1, Paganini has implemented a perfect merger between an overwhelming technical and instrumental imagination and a genuine musical inspiration. In this indissoluble unity of musical and instrumental suggestions, the Capricci treasure the deepest motivations for their own charm. To the eighteenth-century capriccio-studio tradition, Paganini has added phantasmagoric elements influenced by the Baroque style, exorbitant extravagances widely taken from the neoclassical aesthetics and from the most measured examples of his predecessors. The Capricci of the Genoan musician do not retain anything more of the progressive introduction to the arduous instrumental difficulties, but they, rather, take on the form of a challenge thrown down “Alli Artisti”. The Capricci musical aspect is always in the foreground and highlighted, whether it is in the slow introduction of No. 4, which, to Schumann, reminded the Funeral March in Heroic Symphony by Beethoven, or in the strong Posato of the Seventh, or in the Andante of the highly polyphonic Eleventh, or in the pastoral Allegretto – hurdy-gurdy-like – of the Twentieth. From the first to the last they all show a substantial uniformity as regards the difficulty and the playing technique which are always assumed as already acquired and fully possessed.
Moreover Paganini does not limit himself to examine one single playing theme in every single piece as usually happens in a Studio: every Capriccio actually features a continuous variety of different types of obstacles to face and overcome. In the inscription “Alli Artisti” is the very reason of being of these 24 compositions. A raison d’étre that violinists often forget, limiting themselves to perform as if they were mere and simple virtuosity scores, using unreliable editions too. On the contrary, Ksenia Milas clearly keeps in mind all these aspects during her performances, where she always combines a deep respect for the scores with a stylistic consciousness which are difficult to find in a young soloist.
Danilo Prefumo © 2021

Paganini 24+
A project by Milas

Ksenia Milas is a Russian violinist who has been living in Italy for more than 10 years, and who has a constant performing activity in solo violin recitals and in concerts as a soloist with chamber ensembles and orchestras in Italy, Russia and all over the world. She works with various orchestra conductors and collaborates with several musicians in chamber ensembles.

Since 2010, she teaches at the International Academy in Imola and in 2020 she started teaching at the Fiesole Music School, where she passionately passes down the secrets of the Russian violin school’s technique to her numerous students.
In 2017 she recorded the six Sonatas for Solo Violin Op. 27 by Eugene Ysaÿe for Anima Record, a project supported by music critics Sandro Cappelletto and Tully Potter, who have written the CD booklet. In September 2020, at ‘Palazzo Tursi’ in Genoa, she records Paganini’s 24 Caprices op. 1 plus the 4 Studies, recently discovered by Prof. Danilo Prefumo, on the violin “Sivori”, belonged to Paganini. In 2021 she becomes official partner of the iClassical Academy recording a collection of video-lessons on the Six Sonatas by Ysaÿe, uploaded on the Musical Jewel Section.

After hearing her play, the Swedish composer Jonathan Östlund dedicated her a composition written in January 2018, “Paganini Fantasia, a new work dedicated to Ksenia Milas”, and from 1999 to 2007 she collaborated with the violinist Saveliy Shalman for the production of the movie lessons “I’ll be a violinist”.
She was admitted to the Maastricht Conservatoire at the age of 20 and graduated with honors in 2012 with M° Boris Belkin but, since she was a child, she has been attending masterclasses and advanced training lessons with internationally renowned Maestros.

She started playing the violin when she was only 4 years old at the Music School of Volgograd (Russia); the following year she entered the “Rimsky-Korsakov” Conservatoire of Saint Petersburg where she was welcomed in the classes for talented pupils guided by the Maestro Savely Shalman.

Niccolò Paganini: (b Genoa, 27 Oct 1782; d Nice, 27 May 1840). Italian violinist and composer. By his development of technique, his exceptional skills and his extreme personal magnetism he not only contributed to the history of the violin as its most famous virtuoso but also drew the attention of other Romantic composers, notably Liszt, to the significance of virtuosity as an element in art. As a composer of a large number of chamber works, mostly with or for guitar, Paganini was influential in furthering the performance and appreciation of music in private circles.