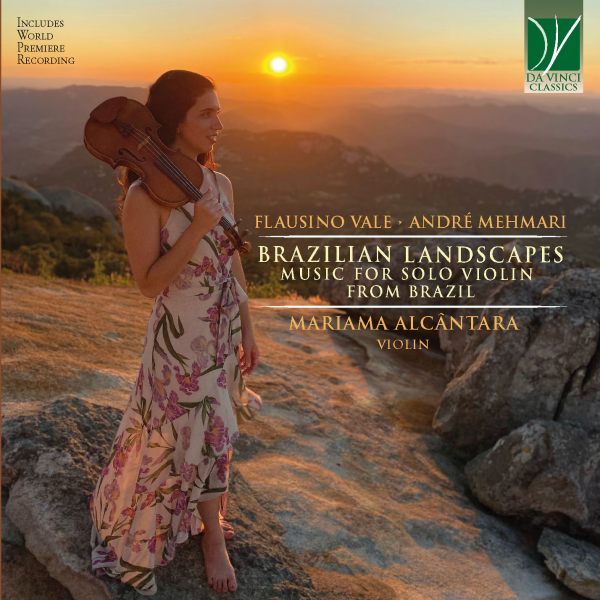 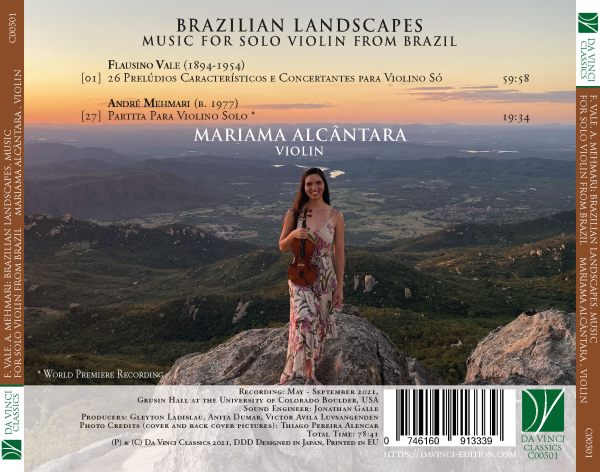 Born and raised in the rural countryside of Brazil, Flausino Vale created a distinctive compositional style that truly represents the Brazilian essence: a mixture of African, Indigenous, and European cultures. Vale’s inspirations came from his country’s nature, landscape, folk traditions, religious rituals, and the most prominent genre of music in his state: caipira music. These inﬂuences, combined with his extensive knowledge of the violin, resulted in the creation of the 26 Preludes for solo violin.
His compositions also include pieces for violin and piano, pieces for voice and piano, arrangements for orchestra, a solo piano piece, works for choir, a piece for ﬂute and piano, and several arrangements and revisions for solo violin. Besides being a composer, Vale was a lawyer, professional violinist, and a researcher of Brazilian folk music. His research culminated in the publication of his book Elementos do Folklore Musical Brasileiro (Elements of Brazilian Folk Music) in 1936.
Composed between 1922 and sometime in the 1940s, the 26 Preludes are original works inﬂuenced by Brazilian folk culture. They started as a Suite of nine Preludes titled Suite Mineira, and the manuscripts of these ﬁrst nine works are well preserved and were edited and dated by the composer. In the 1930s, however, Vale decided to add more works to the collection and changed the title to 26 Characteristic and Concertante Preludes for Solo Violin. The 17 Preludes that were added are not dated; the manuscripts come from diﬀerent copyists and some of them have diﬀerent versions of the same piece.
All but four of the Preludes are in 2/4 meter, and most are to be played in a relatively fast tempo (20 out of 26 are marked Allegro or Allegretto). Most are in a major key that corresponds to the violin’s open strings. All of them were dedicated to someone, including famous violinists, composers, or the composer’s friends and family.
The title of these works represents the combination of virtuosic tradition of European 19th-century violin repertoire with Brazilian caipira music. The choice of words is particularly interesting: concertante demonstrates Vale’s intention of having these works performed as show pieces either separately or as a set, as he had done himself in his recitals. The other word present in the title, characteristic, probably relates to the use of characteristic elements of folk and popular culture the composer was so familiar with, such as the sounds of birds, popular rhythms, dances, and Brazilian folk instruments.
Caipira is a genre of Brazilian culture associated with the rural life of the southeast and midwest regions of the country. It survives to this day as a cultural genre expressed through music, food, rituals, and festivities. The state of Minas Gerais, where Vale lived his entire life, is known for being the home of the caipiras, and the distinctive characteristics of caipira music and traditions can be heard in Vale’s Preludes. The most prominent caipira element in the Preludes is the use of parallel thirds (as well as the inversion, sixths). In authentic caipira music, the singers are always a third apart and since it is such a determining characteristic of the style, this interval is literally called terças caipiras (caipira thirds).
The viola caipira (ten-string guitar with ﬁve courses of strings arranged in pairs) is the instrument closely tied to the identity of this genre of music. It plays a central role in Vale’s musical culture, and therefore, its inﬂuence on his compositions remains evident through the extensive use of pizzicato and the indications alla guitarra (to position the violin like a guitar on the lap).
Vale passed away on April 4th, 1954 in the city of Belo Horizonte. Only four of the Preludes had been published by the time of his death. Caipira music has changed a lot since the urbanization of several cities in Brazil. Therefore, Vale’s Preludes have the role of preserving a musical style that is unique to southeastern Brazil in the ﬁrst half of the 20th-century. Prelude XV, Ao Pé da Fogueira, got into the hands of legendary violinist Jascha Heifetz, who arranged the piece for violin and piano, leading to its publication in 1937 by Carl Fischer. Other prominent violinists also performed and recorded Heifetz’s arrangement, such as Zino Francescatti, Issac Stern, Henrik Szering and Ruggiero Ricci.

Commissioned in 2020 by Mariama Alcântara, the Partita para Violino Solo draws inspiration from Johann Sebastian Bach’s compositions for the violin. Varied in construction, Bach’s Partitas for Solo Violin have from ﬁve to eight movements, based upon rhythms of European Baroque dances. Mehmari’s Partita has seven movements, and is based upon rhythms and sounds of Brazil.
The ﬁrst movement, Devaneio, ﬂuctuates between the style of a Baroque Sarabande (a slow, stately dance in triple meter) and a more romantic style with glissandi and longer phrases. It also relates to a Baroque Prelude, with an improvisatory feel and acting as an introduction to the following movements. The bass line drives the melody, creating contrasts of mood and distinct characters.
The second movement is titled after the famous Brazilian genre choro. The word choro means cry, but despite its meaning, this instrumental Brazilian popular music genre is often fast and has a vibrant and virtuosic character. Choro was heavily inﬂuenced by European and African styles and rhythms, and is usually written in 2/4 time signature with three sections. The standard instrumentation for choro is mandolin, cavaquinho, guitar and percussion. To imitate these traditional instruments, Mehmari writes the entire second movement to be played in pizzicato.
One of the most popular chorinhos of all time is “Apanhei-te Cavaquinho,” by Ernesto Nazareth (1863-1934), which was recorded hundreds of times by diﬀerent performers and ensembles and quoted by Darius Milhaud in his ballet Le Boeuf sur le Toit. Mehmari also quotes this famous piece in this movement, connecting old and new. In Mehmari’s words, “I hold this theme from Apanhei-te Cavaquinho very dearly – Nazareth’s compositions represent my musical thoughts and my own life story.”
Lamento is a slow movement that has a reﬂective and improvisatory character, resembling a Baroque Prelude. It also makes reference to the lamentations played on the rabeca, an instrument known from the Northeast region of Brazil. The rabeca descended from the rebec, a type of medieval ﬁddle, and has been commonly used in Northeastern Brazil popular and religious festivities since the seventeenth century.
Following this movement comes the Furioso, which translates to furious. Full of accents, Bartok pizzicati, and suspenseful harmonies, this movement creates an exciting and energetic feeling. Mehmari explores the more percussive capabilities of the violin, working with the consonants of sound production.
In Moto Perpétuo, the ﬁfth movement, Mehmari uses driving sixteenth notes which evokes Bach, but also the traditional rabeca music of the Brazilian Northeast region. The various accents and changes of meter create a sense of instability, which resolves into a beautiful cantabile passage. He deﬁnes this as the most virtuosistic movement of the Partita, a “violin vertigo.”
The next movement, Árida na Quarta Corda, translates to arid in the fourth string. Here, Mehmari plays with words: he takes the famous title Air on the G String (from Bach’s Orchestral Suite no.3 in D Major BWV 1068) and switches the word air to arid as a way of referring to the arid climate of Brazil’s Northeast, known as sertão. In this hauntingly beautiful movement, Mehmari’s lyricism includes vast silences inspired by the arid landscape of the sertão, and portrays the precarious conditions that its inhabitants have to endure. Every F sharp on this movement is to be played a quarter tone lower, which creates the arid, dry, and painful character.
The piece ends with Rabeca, a fast, dance-like movement. The movement’s rusticness is portrayed through the use of baião – a musical genre and dance style that is based on a syncopated duple meter rhythm, associated with the state of Pernambuco. The rabeca is a typical instrument of baião, besides the zabumba (a type of bass drum), triangle, accordion, ﬂute, and pifano (a wind instrument of Northeastern Brazil). Referencing Bach’s joyous Gigas and Brazilian beloved baião dance, Mehmari takes the listener on a journey through the Brazilian Northeast’s most popular sounds.

MARIAMA Alcântara
Born in Brazil, violinist Mariama Alcântara grew up in a musical family. Following her solo debut at the age of 12 with the Paraiba Symphony Orchestra, she engaged in numerous performances across the Americas and Europe. Mariama has been a member of several orchestras in the United States, including the Colorado Springs Philharmonic and Pennsylvania Chamber Orchestra. Presently, she is performing as a member of the Iris Chamber Orchestra.
Passionate about improving equality and diversity in classical music, Mariama worked with the Boulanger Initiative as a researcher, an advocate of women composers based in Washington D.C. The Initiative promotes music composed by women through performance, education, commissions, and consultations.
Festivals appearances include Mozarteum Summer Academy (Austria), Rencontres Musicales Internationales en Graves (France), Sphinx NAAS Audition Intensive, Dalí Quartet International Chamber Music Festival, Wintergreen Summer Academy, Virtuosi (Brazil), and Penn’s Woods Festival. Mariama has collaborated with the Aizuri Quartet and shared the stage with the Trans Siberian Orchestra, Snoop Dog, Corky Siegel, as well as many Brazilian artists. Holding an interest for all aspects of the arts industry, her recent engagements include Personnel Manager and Librarian for Pro Musica Colorado Chamber Orchestra.
Upon graduating with her bachelor’s degree under the tutelage of Dr. Soh-Hyun Altino at the University of Memphis, Mariama won the position of Artist Fellow with the Iris Chamber Orchestra where she received mentorship from conductor Michael Stern and several visiting artists. She was also a member of the inresidence string trio, performing outreach concerts regularly, planning and implementing community-based music projects and activities.
She received her master’s degree from the Pennsylvania State University as a student and teaching assistant of Professor James Lyon. A 2019 recipient of the prestigious Dorothy Richard Starling Foundation Fellowship, Mariama earned her Doctorate of Musical Arts at the University of Colorado Boulder as a student and teaching assistant of Professor Harumi Rhodes of the Takács Quartet.

ANDRÉ MEHMARI
André Mehmari, born in 1977, is considered one of Brazil's leading musicians of his generation. His activities as pianist, composer, and arranger are highly regarded in both popular and classical music. As his compositions have been performed by all Brazil’s leading orchestras and chamber ensembles, Mehmari also writes and records music for films and series at his own Studio Monteverdi, located at the Cantareira Hills. Having released more than forty solo albums, Mehmari has collaborated with musicians such as Antonio Meneses, Hamilton de Holanda, Mario Laginha, Maria Bethânia, Ná Ozzetti, Monica Salmaso and Gabriele Mirabassi among many others.
He has performed in countries such as Italy, USA, Japan, China, Canada, Argentina, Chile, Ecuador, Colombia, French Guiana, Norway, Holland, Finland, Switzerland, Luxemburg, Germany, France, Austria, Ireland, Belgium, Portugal, Spain, Denmark and Angola. He has performed in venues such as Salle Gaveau (Paris), Kennedy Center (Washington), Lincoln Center (NYC), Umbria Jazz, Sala São Paulo and Sala Cecília Meirelles (Brazil), as well as in all of Brazil's major festivals.

Flausino Vale
Born and raised in the rural countryside of Brazil, Flausino Vale created a distinctive compositional style that truly represents the Brazilian essence: a mixture of African, Indigenous, and European cultures. Vale’s inspirations came from his country’s nature, landscape, folk traditions, religious rituals, and the most prominent genre of music in his state: caipira music. These inﬂuences, combined with his extensive knowledge of the violin, resulted in the creation of the 26 Preludes for solo violin.
His compositions also include pieces for violin and piano, pieces for voice and piano, arrangements for orchestra, a solo piano piece, works for choir, a piece for ﬂute and piano, and several arrangements and revisions for solo violin. Besides being a composer, Vale was a lawyer, professional violinist, and a researcher of Brazilian folk music. His research culminated in the publication of his book Elementos do Folklore Musical Brasileiro (Elements of Brazilian Folk Music) in 1936.