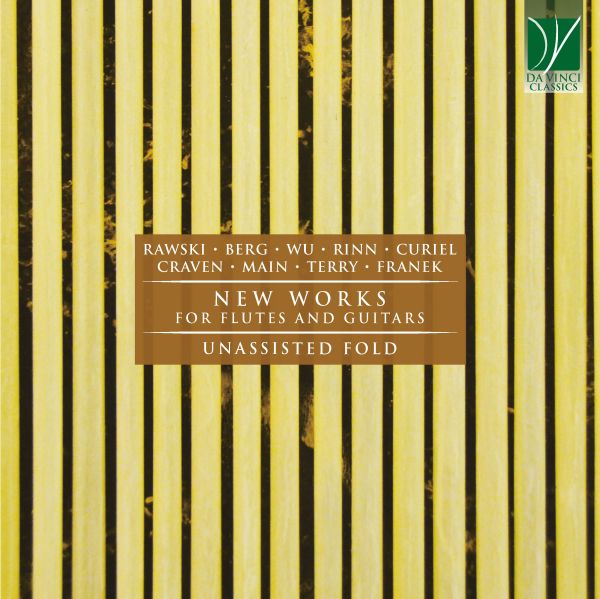 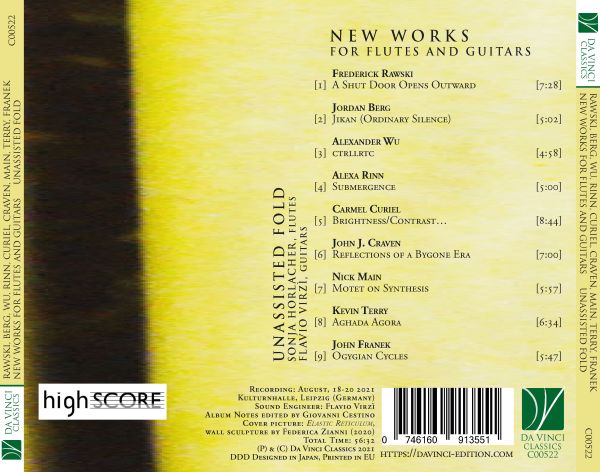 New works for Flutes and Guitars

The tracklist for this album collects all of the works for flute and guitar written by participants in the 11th highSCORE New Music Festival (held online August 9-21, 2021). This intensive two-week contemporary music event, organised by highSCORE New Music Center (Pavia, Italy) offers young composers the opportunity to write for various instruments or chamber ensembles, to attend masterclasses and lectures by leading musical and academic personalities, and to engage with young colleagues in a fruitful dialogue that promotes their artistic growth. Since the composers come from different backgrounds and experiences, what you will hear on this recording can be nothing but a heterogeneous “still image” of many musical stories trying to find their own voice (or have their voice heard) in the vast landscape of today’s music.

Frederick Rawski is an American composer of concert and electronic music based in Kyoto, Japan. His work draws upon contemporary classical, electro-acoustic, and traditional musical forms from around the world. He studied composition with John Fitz Rogers, Roger Zahab and John Malia at the Vermont College of Fine Arts, and trained as a classical guitarist with Timothy Olbrych at the College of William & Mary. A Shut Door Opens Outward is a four-part work for flute and classical guitar, with each movement exploring a different, and increasingly more spacious, set of intervallic relationships.

Jordan Berg is a composer, guitarist and percussionist from Lethbridge, Alberta, Canada. He has recently completed a BMus under Arlan Schultz and has spent significant time studying music in Los Angeles, Toronto, and New York. He also holds a BA in Philosophy. Jikan: Ordinary Silence (for amplified flute and guitar duo) was composed entirely using three Japanese scales – the Hirajoshi, Iwato and In scales. “Jikan” was the name given to famous poet and songwriter Leonard Cohen when he lived at a Zen Buddhist monastery on Mount Baldy in California. The name translates to “ordinary silence” which matches the mood and character of the piece, not in the sense of quietness, but that it has a certain meditativeness to it that matches the title. The piece was inspired by all of the beautiful and contemplative music that exists for flute and guitar duo.
Alexander Wu is a composer, pianist, electronic producer, and improviser based in Boston. His music explores the relationships that exist within sound, between sound and society, and among those who make sound. He has composed in and between various styles, including contemporary classical, jazz, and electronic music. He is currently pursuing his BMus both in Composition and Electronic Production and Design at Berklee College of Music. In ctrllrtc, the composer wanders around the border between the acoustic sound source and the computer’s subsequent mimesis. The mimesis is transformed and at times, supersedes all else as the predominant force guiding the soundscape forward. With repetitive yet evolving figures being played and echoed between musicians and the computer, he hopes to create an illusion of freedom and security that is necessary and inevitable, even when it is shattered by a sudden gust of wind.

Alexa Rinn is a Chicago-based composer whose music aims to evoke nuanced emotions and to capture specific feelings in sound. She is interested in our visceral and emotional responses to music, and specific meanings of her works are often open to the interpretation of the listener. Her music has been performed at the Norfolk Festival, the highSCORE Festival, New Music On the Point, and by ensembles such as SONAR and Occasional Symphony. Alexa graduated with her doctoral degree in composition in 2021 from the Peabody Institute of the Johns Hopkins University, where she studied with Michael Hersch. In Submergence, layered flutes play slow dissonant chords, while strummed and bowed guitars play tonal harmonies. The piece was composed with the feeling in mind of being submerged under water or pushed downward by a benevolent force.

Carmel Curiel is a bachelor’s degree student in composition at the Jerusalem Academy of Music and Dance, under the guidance of Yinam Leef. Carmel is the recipient of a Creative Excellence Grant (Sharett Grant) by the America-Israel Cultural Foundation for the years 2018-2021. She won the 1st prize in the Israeli Composers Competition (2019) and in the Mark Kopytman Composition Contest (2021). Recently, she was also awarded the 2nd prize in the Klon Award for emerging composers. Carmel has participated in CEME Festival and highSCORE Festival, attending masterclasses with Helmut Lachemann, Philippe Leroux, and David Ludwig. Her pieces have been played by the New York Philharmonic Orchestra, Ensemble l’Itinéraire, Ics Quartet, Mivos Quartet, and Meitar Ensemble. Her piece Brightness/Contrast… investigates the notions of sound and noise and the contrasting relationship between them—sound as the clarity of noise and noise as an emotional outburst and extreme of sound.

John J. Craven studied piano at Peabody Conservatory and received a BA in communication studies at the University of Iowa. He has a BFA. from Purchase College, and he received a MM in composition from Peabody Institute in 2011. For ten years he worked in the NYC area, providing music theater direction, and accompanying for dance. Since 2020 he has made his music available on the e-Scholarship Open Access Publishing Platform. Besides unassisted fold, he has written for loadbang ensemble. He is featured on a composer album produced by Navona Records (Sustain Vol. 2. Solo Piano and Chamber Works). Reflections of a Bygone Era is a Neoclassical composition that attempts to integrate late Baroque and early classical forms with modern approaches and techniques. In terms of expressiveness, the A sections have a contemplative theme that contrasts with the faster, dance-like tempo and joyful expression of the middle section.

Nick Main is a composer, vocalist, and poet based in the San Francisco, New York, and Helsinki metropolises. As a singer, his technique is rooted in the bel canto and English traditions which influence his instrumental writing. In composing, he seeks to combine traditional and modern musical elements with an underlying lyricism and hunger for virtuosity. Nick is currently pursuing his bachelor’s and master’s degrees at the Sibelius Academy where he studies composition with Riikka Talvitie and voice with Hannu Niemelä. In addition to his formal studies, he enjoys exploring the interconnectedness between language and music. Nick serves on the junior advisory council of Musaics of the Bay. Motet on Synthesis (for alto flute and guitar) is a diptych which explores a wistful nostalgia layered over with dust—finding old photos in a forgotten corner of a garage as we clear out our belongings to leave home and everything we have known behind.

Kevin Terry is a composer and performer whose work is concerned with the figuration of sound and of listening. In 2019 he received the Jerome Hynes Young Composers’ Award and his work has received prizes such as the West Cork Chamber Music Composition Prize and the IMRO/Feis Ceoil String Orchestra Composition Prize. His formative musical experiences include participating in The Deep Listening Retreat with Pauline Oliveros and studying improvisation privately with Han-earl Park from 2007 to 2011. He completed his undergraduate at UCC and his Masters at Cork School of Music. Aghada Agora (for bass flute and electric guitar) is an homage to the townland of Aghada in East Cork (Ireland). It is a small village on the water surrounded by green fields and wooded areas. While this piece utilises a number of extended techniques for both instruments my focus was on conveying the rhythm with which one takes in a natural space.

John Franek is a pianist and composer whose works have been performed in North America, South America, Europe and Asia by prominent ensembles such as The Siberian State Symphony Orchestra, Janacek Filharmonie, and the Lontano Ensemble. An avid researcher and performer of Mozart, John has personally performed on three continents including concert tours throughout the United States. He is the Founder and Artistic Director of his own record label Nous Records. Much like the vivid and contrasting characteristics of Odysseus’s savior/captor Calypso in Homer’s Odyssey, Ogygian Cycles (named so after the island Ogygia, where Calypso was said to reside) aims to portray the emotional depths of reluctance, hesitance, coincidence, understanding and agreement within the relationship of the the musical material from the two contrasting instruments. A precarious relationship grasping for cohesion, a consistent desire for reciprocation, and unabashed attempts at tumbling into cohesion define the nature of this work.
Album Notes edited by Giovanni Cestino

Unassisted Fold is a duo formed in 2011 by flutist Sonja Horlacher and guitarist Flavio Virzì. Focusing on developing new and original repertory for flutes and guitars, over the years they have been working together with many composers and artists from different music areas. Their instrumentarium includes the whole family of flutes (from piccolo to bass flute) and classical, electric and MIDI guitars, but also mandolin, banjo, and electric bass. In 2014 they recorded an album of microtonal IDM (intelligent dance music), entitled Uninterrupted Disturbance. The music has been arranged together with Finnish composer and Techno artist Jukka-Pekka Kervinen and released by limit cycle records. Their interest in alternative tuning-systems and microtonality brought them to collaborate several years with German composer Manfred Stahnke. In 2018 they recorded a portrait CD of his music. unassisted fold has been invited to perform in several festivals around Europe. Sonja and Flavio are often invited to play with many prominent ensembles, including Ensemble Modern, Ictus Ensemble, Contrechamps, and Magnetic Ghost Orchestra.

John Franek (b.1996) is a pianist and composer whose compositions “evoke an epic narrative.” (Sonograma Magazine)

John has had premieres of his own works performed in North America, South America, Europe and Asia, with notable premieres in locations such as in New York City, Philadelphia, Vienna, London, Amsterdam, Paris, Lviv, Krasnoyarsk, Ostrava, Olomouç, Milan, Rome, Havana, Quito and Tashkent. Among these performances he has had his worked performed by ensembles such as The Siberian State Symphony Orchestra, Janáček Philharmonic Orchestra, The Moravian Philharmonic, KLKNewMusic the Lontano Ensemble and Trio Immersio. Maintaining a full-time schedule of composing, he is currently looking forward to premieres this coming season with the Sofia Philharmonic Orchestra, Spółdzielnia Muzyczna, The Syntax Ensemble, the Brightwork Ensemble, Hub New Music, Unassited Fold and the TACETi ensemble. Throughout the 2020 - 2021 season John has had further premieres with a collection of individuals and Duos including Beatriz Macias who premiered his work Mo'Tri for solo flute at the Tampere Flute Fest.

This year John will be taking part in some of the most prestigious and rewarding Composition Festivals including the highSCORE Festival, Impulse New Music Festival, the ICEBERG Institute, International Composer's Institute Thailand and Sofia Symphonic Summit.

As an active recording artist and electronic music composer, John has a collection of acoustic and electroacoustic albums slated for release throughout the year. John's music is featured on the music labels Navona Records and Donemus Composer's Voice, among others.

As a sought after soloist, John has performed on three continents including concert tours throughout the United States. An avid researcher and performer of Mozart, he began touring his “Franek & Mozart” lecture-concert in 2018 and is currently working on a book about Mozart for popular audiences. His solo album Purely Mozart demonstrates his particular love of Mozart: “John Franek's affinity for Mozart is evinced in his brilliant, subtly-shaded playing which brings forth the composer's work in all of its multivalent sparkle and darkness.” (Scott Hawkinson, Double V Digital Recordings)

John has benefited from the private composition and piano instruction of Silvina Milstein, Edward Nesbit, Matthew Kaner, Phyllis Lehrer and Jay Kawarsky. Through his participation in the Level II Master's Composition Program at the G. Verdi Conservatorio in Milan he will undergo private instruction from the world class composers Klaus Lang, Marco Stroppa, George Benjamin, Unsuk Chin and Alberto Posadas.

John is the Founder and Artistic Director of his own record label Nous Records, is a Navona Records Recording Artist and maintains and active role as an educator and masterclass artist. John's works are published by Donemus Publishing.