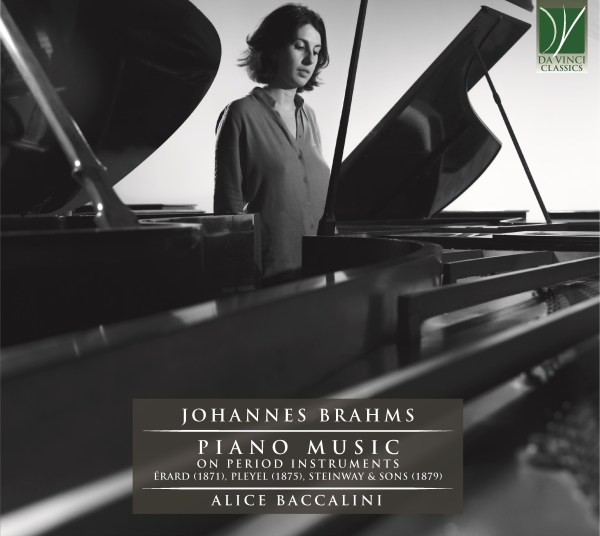 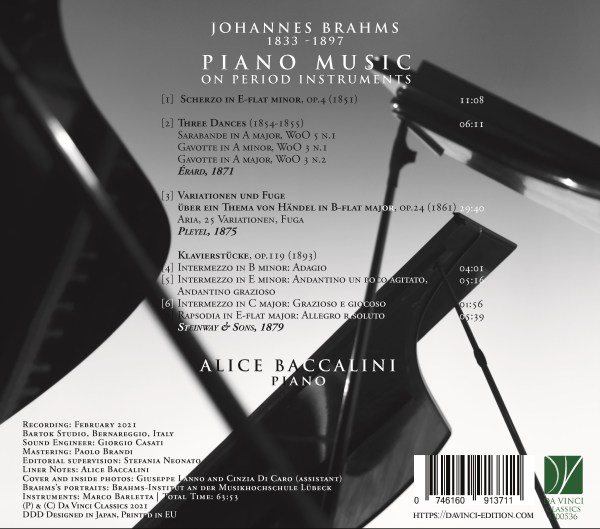 Keeping silent in order to speak better:
Brahms and the piano
Carlo Serra

Four pieces, four very diverse genres, three pianos. Just as in a prism, the image of an elusive composer such as Brahms is brought to converge. Starting with a Scherzo, reaching the youthful Dances, getting to one of the most elaborated cycles of the nineteenth-century variation form, until the last collection, closing a piano catalogue among the most arduous and indecipherable of… Well, when one gets here, things become hard. Of Romanticism? Of late Romanticism? Or of modernity?
This is the strange fate of this great composer and book collector. He was so silent and so little inclined to intimacy, that he prompted entire genealogies of composers, critics and historians to try and enroll him in their ranks: from Hanslick to Schoenberg, from Nietzsche to Mahler.
Loving what is unexpressed is certainly not the simple praise of obscurity or of a character’s severity, although these were very strong elements in Brahms’ personality. The unexpressed is the fact that often, when facing his scores, the interference of diverse elements (which, though hinged on a peerless harmonic fantasy, seem to move by themselves) creates islands of tension. They let themselves never be resolved, just as happens with his diabolic taste for rhythmical intersections, or with his ease in finding very powerful melodic forms, digging into the listener’s memory. Therefore, even the Scherzo form is divided into (at least) six sections, whilst the Sonata surrounding it probably disappears. The Variation form hybridizes itself with the Fugue. Modality intersects with tonal language in the Rhapsody which closes the composer’s relationship with solo piano, in a very intimate – and therefore wordless – journal. Wordless, or perhaps with the only words of an ironic apostle of Romanticism, who was paradoxically closer to the generation before him (Schumann) and to that after him (Mahler).

Alice Baccalini
Born in Milan, Alice Baccalini carried out her piano studies at Conservatorio Giuseppe Verdi, Milan, where she achieved her diploma, with top marks and honours, at the age of fifteen.

She then specialized first with Nune and Tatevik Hairapetian, then with Franco Scala at the Accademia Pianistica Internazionale Incontri col Maestro in Imola (2005-2009), with Lev Natochenny at the Hochschule fùr Musik in Frankfurt (2009-2011), with Elisso Virsaladze at the Scuola di Musica di Fiesole (2012-2014) and with Nora Doallo at the Conservatorio della Svizzera Italiano in Lugano (2013-2015).

Alice first played in public at the age of four and at ten made her début in Conservatorio G. Verdi in Milan with the Società dei Concerti. Since then she has carried out an intense solo and chamber music activity, which has led her to perform throughout Italy and Europe.

In November 2011 Alice won the first price in the XI international contest held by Società Umanitaria.

On the 31st December 2011 she was invited by Teatro La Scala to play E. Satie’s “Gymnopédie” on the occasion of the New Year’s Eve Galà of the Ballet Academy of the theatre.

Alongside the concert activity, Alice founded the Association Marco Budano, a non-profit organisation with the goal of making music accessible to people excluded from society. The first initiative promoted by the association was the innovative “Brahms a Milano”, a project aiming to program the integral chamber music works of Johannes Brahms. All proceeds went to associations operating for social inclusion.

Thanks to the shared passion for philological research, combined with the love and use of original instruments, in 2021 Alice founded Lumi Quintet - fortepiano and wings - together with Emiliano Rodolfi, Eduardo Beltrán, Elisa Bognetti and Michele Fattori.