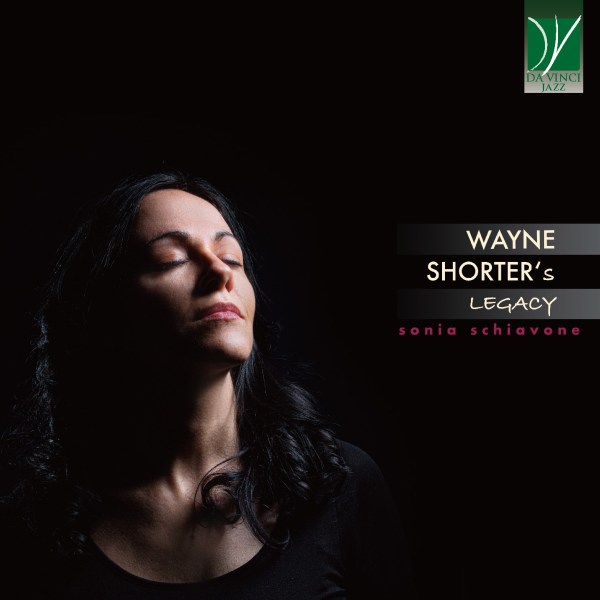 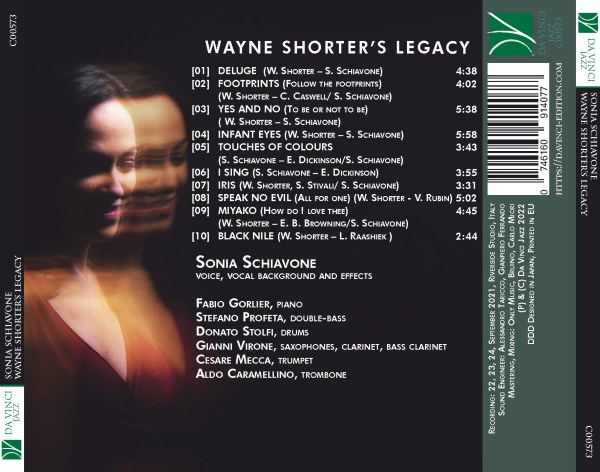 Wayne Shorter is a leading figure of contemporary jazz. His long career is a personal stream of music, outflowing with ideas. His music fascinated me deeply since the very first hearing. The possibility of singing it gave me the enthusiasm one can feel when venturing into almost unexplored territories, which, however, one knows to be rich in treasures. It is a transforming kind of music, making one go beyond the usual, dilating one’s possibilities. As Herbie Hancock puts it, “it is a source of light”. I think that this is the most important heritage he is leaving to us.
Shorter’s compositions present themselves as a plastic material, which is, at the same time, frail and delicate. It was a pleasant challenge, for me, to arrange this material in order to bring it closer to my own personal way of feeling it. Many of his earliest compositions, written between the Fifties and the Sixties of the past century, are currently a component of every jazz student’s education. They became, in their own fashion, “standard” in the broadest meaning of the term. However, much of Shorter’s repertoire remains scarcely performed by the singers. Here I wished to propose, in a vocal style, some of his pieces written precisely in that period, interpreting texts already written by other authors (as in Speak no Evil and Black Nile), in some cases elaborating and modifying them (as in Footprints and Iris), and personally writing new ones (Infant yes, Yes and no), also for pieces hitherto not interpreted by other singers (as in Deluge and Miyako). For Yes and no I freely took inspiration from Hamlet’s hesitation in his famous monologue “To be or not to be”. The lyrics of Infant eyes are dedicated to my daughter and to my husband, whilst for Deluge and Miyako the poetics of Elizabeth Barrett Browning inspired my lyrics. This author enchanted me, and I learnt that she had been greatly appreciated by Wayne Shorter too.
Shorter’s works are small tokens of quintessential creativity, rich in elements knowledgeably combined. His writing makes me think of the synthesis and of the surprise caused by aphorisms, but also by the poetry of Emily Dickinson (to whom I paid homage in my preceding discographic work, Come – Eden! of 2020). I therefore wrote two new original pieces, Touches of colours and I sing on Dickinson’s lyrics. Here they aim to be a small homage to Shorter’s poetics and to his artistic philosophy. The former offers a new reading of the American writer’s poetry. It is an invitation to notice that light’s changes of colour in the passage between night and day lead us to see reality from many different viewpoints. A new and unsettling vision of something we had in front of us always can thus be born. I sing was written during the first Italian lockdown during the great world pandemic which is still ongoing, when I was working on the arrangements of some of the pieces which eventually became part of this CD. The words written many years ago by Emily Dickinson, who lived an atypical, voluntary lockdown for her whole life, acquired a new meaning for me. They represented an encouragement to find in art the medium for expressing myself and for “throwing darkness away”.
Sonia Schiavone

Fabio Gorlier studied piano at the Musical Institute of Alba under the guidance of Valter Protto and graduated from the Conservatory of Turin. Meanwhile, he approached jazz. He attended many courses about jazz piano and joined many seminars such as the International Seminars of Siena, Arquato Jazz and Nuoro Jazz. He graduated in Performing Arts from Turin University. He has been going through a remarkable concerts activity, and despite his being into jazz, he plays classical music and modern music too. He took part in many Italians festivals such as Torino Jazz Festival, MiTo, Dolomiti Ski Jazz, Europa Cantat, Venezia Jazz Festival and performed in some important theatres such as Teatro La Fenice in Venice or Auditorium “Giovanni Agnelli” in Turin. He also performed in Scotland, Ireland, France, Turkey, Australia, Croatia, Switzerland, Austria, Ecuador and China. He played with great musicians like Billy Cobham, Diane Schuur, Andy Sheppard, Furio di Castri, Kyle Eastwood, Stefano di Battista.

Sonia Schiavone. A Turinese singer, she began her studies of classical music at the age of seven, later continuing in the field of jazz music, by following many courses and workshops with internationally famous teachers, such as Sheila Jordan, Sandy Patton, Maria Pia De Vito, Bob Stoloff, Diana Torto, Garry Dial, John Riley, Mike Abene, John Taylor, Ben Allison, Stefano Battaglia and many others. She earned a degree in Architecture at the Politecnico of Turin with the highest score and with honours, and a degree in Jazz at the Conservatory Niccolò Paganini of Genoa with a dissertation about Wayne Shorter’s music, under the supervision of Paolo Silvestri. Over the years her versatile interests have encompassed voice and vocality in the broadest possible meaning; jazz, exploring all of its styles; gospel, operatic singing, a cappella vocal music; the development of childhood musicianship; harmonic singing; extemporaneous vocal improvisation. As a professional musician, she co-operated for twenty years with numerous jazz musicians. She performed in numerous festivals and seasons with her own eponymous projects. In the last twenty years, she has also actively and passionately focused on musical education. She has been awarded numerous prizes and honours at singing competitions of jazz, pop and gospel music, both as a performer and as a songwriter, including a First Prize at the “Gospel Showcase 2002”, during the Prima Rassegna Internazionale di Gospel, Blues, Spiritual & Black Music "Gospel in Castelbrando" in Cison di Valmarino (TV), organized by Cheryl Porter; First Prize at the “Talents 2002” Competition, in the section dedicated to jazz singing, organized by the Istituto musicale di Rivoli (Turin; the Diploma of Honour at the TIM Torneo Internazionale di Musica, Moncalieri (Turin), section Jazz; in 2012 she was a finalist at the XII Concorso Internazionale “Scrivere in Jazz” in Sassari – section Singing; in 2017 she was a finalist at the "19° Biella Festival Autori e Cantautori" with her original work "In viaggio".

Stefano Profeta began his musical studies at the age of nine with classical guitar; later he studied double bass at the State Conservatory of Music in Alessandria graduating with honors in double bass jazz and in Jazz Music, Polular and Improvised Music.
After a few stays in India he began to study sitar and rhythmic forms related to tabla, then deepening his knowledge of Indian music by following the courses of the Center for Oriental and Middle Eastern Studies in Turin.
Numerous are his collaborations in the jazz field, including those with John Riley, Alberto Mandarini, Kyle Gregory, Gianluigi Trovesi, Gianni Cazzola, Sandro Gibellini, Maria Pia De Vito, Joe Magnarelli and many others.
In addition to jazz, he has often worked in studio recordings and pop music tours.
He has, to his credit, a discography of 23 Cds, including jazz, pop, classical and ethnic music productions. He has played in tours and festivals in Italy, Spain, France, Croatia, Slovenia, Switzerland, Czech Republic, Argentina, Brazil, Uruguay.

Gianni Virone (Saxophonist). He is native to Chieri (Turin, Italy). Saxophone player, arranger and composer since 2002, he worked with small groups, big bands/orchestras and recording as arranger, section player and soloist before playing his compositions with his own trio. His professional activities also include teaching saxophone, improvisation techniques, jazz harmony, composition/arranging and big band class in several schools. He graduated at “Conservatorio G.Verdi” in Turin with Furio Di Castri with the highest degree and attended several masterclasses in Italy and abroad with artists like Dave Liebman, Airto Moreira, Jerry Bergonzi, Enrico Rava, Gianluigi Trovesi, Steve Coleman, Ayn Inserto and many others. During the “Siena Jazz Summer Workshop 2002” he won the award named “Nuoro Jazz Workshop 2003”. The next year in Nuoro, he was selected to play at the “Berchidda Jazz Festival 2004”. In 2003, he also won the “Talens” competition for soloists organized by the “Istituto Musicale di Rivoli”. Thanks to them, he attended the Summer Workshop organized by the New School University of New York in Bassano Del Grappa where he was selected for a scholarship. He won the first edition of the national competition “Nuovi Talenti del Jazz Italiano” in 2004. The same year he was a finalist of the “Premio Nazionale Massimo Urbani”. As a big band composer, he was a finalist in several international contests like “Barga Jazz 2007” and “Scrivere in Jazz 2010 and 2014”. He collaborated with various big bands both as an arranger and section player (all saxes, clarinet, bass clarinet and flute) and he played also with: Paolo Fresu, Furio Di Castri, Roberto Gatto, Gianni Basso, John Riley, Fabrizio Bosso, Flavio Boltro, Javier Girotto, Rita Marcotulli, Scott Hamilton, Dusko Gojkovic, Jimmy Cobb, Philip Harper, Terrell Stanford, Eric Vloeimans, Maria Pia De Vito, Danilo Rea, Emanuele Cisi, John De Leo, Nguyèn Lè, Pietro Tonolo and many others. He is an endorser of the Italian saxophone factory Rampone & Cazzani since 2004.

Shorter, Wayne
(b Newark, NJ, 25 Aug 1933). American jazz tenor and soprano saxophonist and composer. He began playing the clarinet at the age of 16, then changed to the tenor saxophone. From 1952 he studied music at New York University (1956, BME) and played in a local band. He performed briefly with Horace Silver in 1956 before being drafted, and in 1958 he joined Maynard Ferguson’s group, in which he first met Joe Zawinul. Shorter then began an important association with Art Blakey’s Jazz Messengers (1959–64), ultimately serving as the band’s music director. After a brief period of rest and work on his own recordings he joined Miles Davis’s quintet in September 1964. He remained with the group until 1970, taking up the soprano saxophone in late 1968 as Davis experimented with electronic instruments and new ensembles, though during the same period he recorded regularly as a leader. Late in 1970, with Zawinul, he founded Weather Report, which the two men continued to lead into the 1980s. Shorter also recorded an acclaimed album presenting Milton Nascimento (1974) and returned to acoustic jazz when he toured and recorded with Ron Carter, Herbie Hancock, Freddie Hubbard and Tony Williams as V.S.O.P. (1976–7). From the mid-1970s he has devoted his time equally to playing tenor and soprano saxophones. In 1985 he greatly reduced his activities with Weather Report, concentrating instead on recording, making international tours with his new group and appearing in reunion concerts with many of his colleagues from the 1960s, most notably Hancock. He also performed in the film Round Midnight (1986). In 1988, with Carlos Santana, he led a Latin jazz-rock group which toured internationally. He toured further with Hancock in the 1990s.