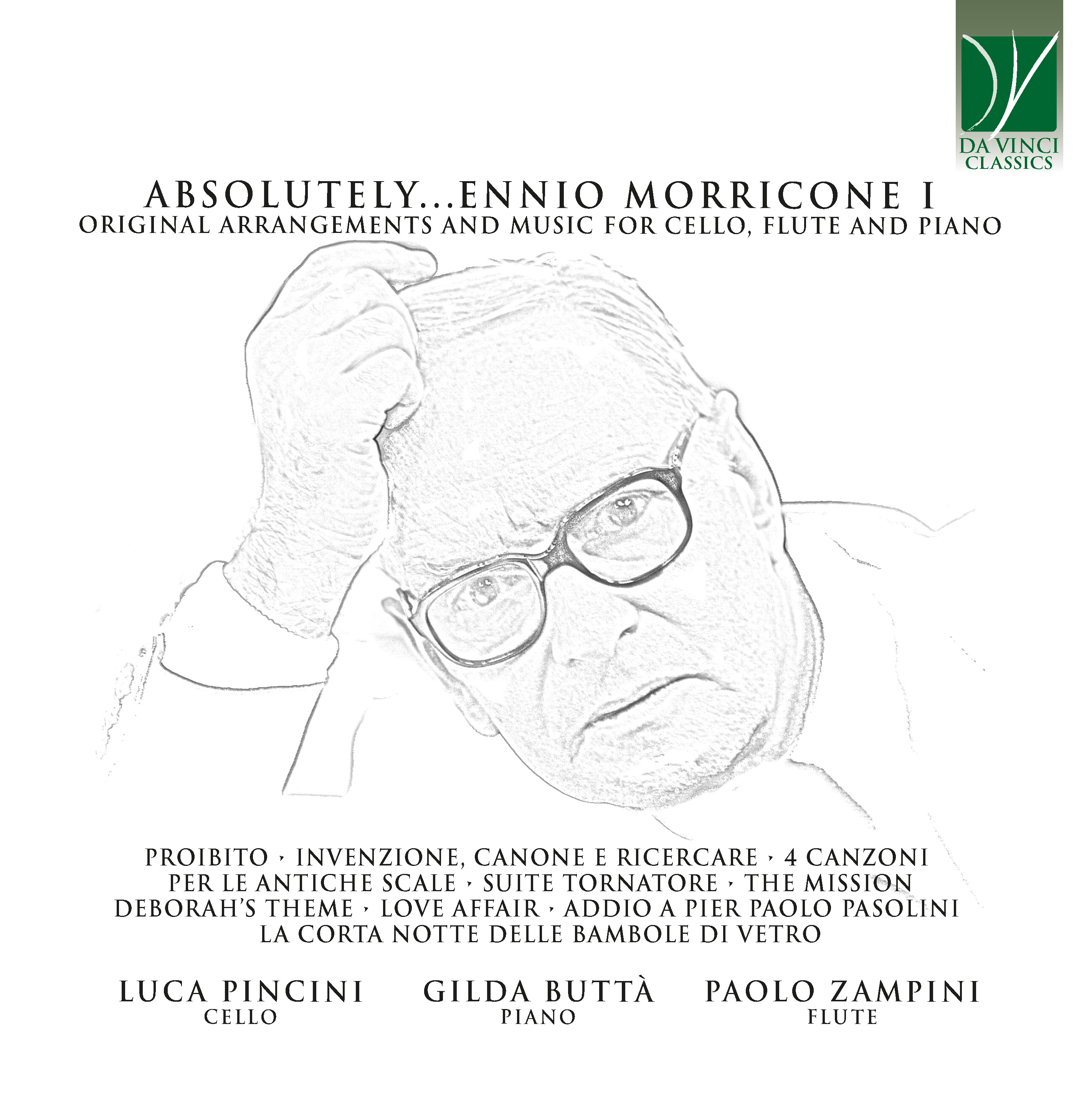 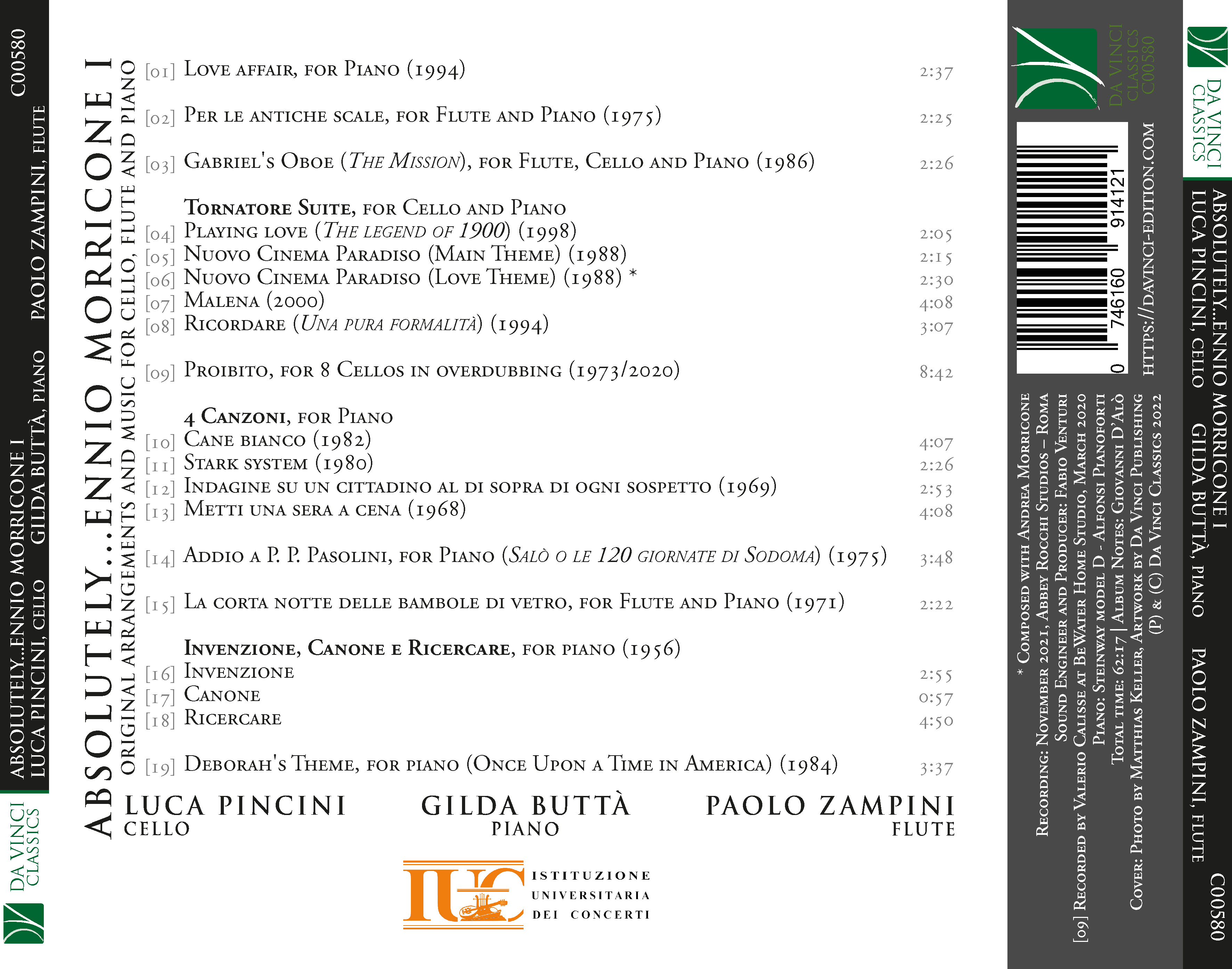 Absolutely…Morricone I: Original Arrangements and Music for Cello, Flute and Piano

Gilda Buttà: Gilda Buttà began her studies at the age of six with his father (a violinist), graduating with the highest honors at the Conservatory of Milan, and at the age of sixteen, under the leadership of Carlo Vidusso.
In the same years she made her debut as soloist with the Orchestra of the RAI in Milan, winning shortly thereafter national and international competitions, including the "Premio Liszt" in Livorno.
Then follows the teachings of Lucia Passaglia, Guido Agosti and Rodolfo Caporali.
The concert career has taken her to play for the most important institutions, both as a soloist and in chamber ensembles throughout Europe, USA, South America, Japan, Korea, China, Russia and Israel.
Dedicated to the most diverse styles, from contemporary music through experimentation and contamination, has developed a vast repertoire.
Her vast repertoire for piano and orchestra, ranging from Mozart to Beethoven, Brahms, Gershwin, Rachmaninov, Shostakovich, up to Nyman, performed for the IUC in Rome, conducted by the composer himself.
With cellist Luca Pincini, her husband in life, is a special deal of understanding, based on the much curiosity as the rigor of musical choices, which has led them to perform the whole of the works of Beethoven, Brahms, Chopin, pages of all the major authors of the classical repertoire, often devoted to compositions by musicians of today, with excellent collaborations.
Gilda Buttà for over twenty five years collaborated with M° Ennio Morricone recording piano in most of his films scores, including: The Legend of the pianist on the Ocean, Canon reverse, Love Affair, The Untouchables, Frantic, Casualties of War, The Good Pope, Bugsy and many others. This is why she is worldwide known as "the pianist of Morricone".
She appeared in several CD and DVD (“I Ennio Morricone", "Film Music", "Piano Solo", "Arena Concerto", "Yo Yo Ma Plays Morricone", "Ennio Morricone-Dulce Pontes "," Live in Japan "," Concert for Peace "," Live in Monaco ") and the various productions, concerts of Radio City Music Hall and Palazzo UN in New York, Herodes Atticus in Athens, Royal Albert Hall in London, Tokyo International Music Forum, Kremlin Palace in Moscow, Arena di Verona, the Auditorium Parco della Musica in Rome, National Theatre of Rio De Janeiro, Piazza San Marco in Venezia, Piazza del Duomo in Milan, Ljubljana Festival, Teatro alla Scala in Milan.
She is also assiduous interpreter of the absolute music of Ennio Morricone who dedicated her "Catalogue" (Suvini Zerboni 2000).
Always has been active as a soloist with other musicians dedicated to Films and Theatre including Luis Bacalov, Nicola Piovani, Franco Piersanti, Paul Buonvino, Lele Marchitelli, Marco Betta, Paolo Silvestri, Daniele Luppi and Gianni Ferrio. Other excellent collaborations such as Mina and Vasco Rossi.
She has recorded for BMG, CAM, SONY, MEG ITALY, PRIMROSE MUSIC LONDON, WARNER, VIRGIN, VICTOR, RCA, EMI ,LIMEN.
For "Weights & Measures", with Luca Pincini, he recorded "Two Skies", with music by Rachmaninov, Gershwin, and Ferrio "Clataja" special guest Roberto Gatto and Luca Bulgarelli.
For the U07 Records has recorded, in duo with Luca Pincini, "Composers", "Absolutely Ennio Morricone" and "Playing George Gershwin”.
She was honored with several awards, including the "Taormina for the Arts.”
After being a professor of piano at the conservatories of Florence and Pescara, now teaches at the Conservatory “Licinio Refice “ in Frosinone.

Ennio Morricone: (b Rome, 10 Nov 1928). Italian composer. A favourite pupil of Petrassi, he also deputized secretly for his trumpeter father in a light music orchestra. He thus developed two distinct sides to his musical personality: one of these led him to embrace serialism (e.g. in Distanze and Musica per 11 violini, 1958) and the experimental work of the improvisation group Nuova Consonanza (from 1965); the other gained him a leading role, principally as an arranger, in all types of mass-media popular music, including songs for radio, radio and television plays, and the first successful television variety shows. In the early days of the record industry his innovative contribution played a decisive part in the success of the first Italian singer-songwriters (‘cantautori’), including Gianni Morandi and Gino Paoli.

After many minor cinematic collaborations, Morricone achieved wider recognition with Sergio Leone’s series of four Westerns, beginning with Per un pugno di dollari (1964). There followed important collaborations with directors such as Bernardo Bertolucci (from 1964), Pier Paolo Pasolini (from 1966) and Elio Petri (from 1968), and particularly successful films with Paolo and Vittorio Taviani (Allonsanfàn, 1974; Il prato, 1979), Valerio Zurlini (Il deserto dei tartari, 1976), Roland Joffe (The Mission, 1986) and Brian De Palma (Casualties of War, 1989). Despite inevitable self-repetitions over a total of more than 400 film scores, his work provides many examples of a highly original fusion of classical and popular idioms: this is noticeable already, albeit in somewhat crude form, in Leone’s series of Westerns, where the music for the opening titles juxtaposes three distinct types of music: a synthetic folk idiom, using the jew’s harp, acoustic guitar and harmonica to accompany human whistling; a contemporary, urban rock sound, featuring the electric guitar; and an unabashedly sentimental choral-orchestral style. With Giù la testa (1971) Morricone entered an experimental phase in which he developed a technique based on melodic, rhythmic or harmonic ‘modules’ (usually of 4, 8 or 16 beats in length), each differently characterized and often featuring a particular instrument. These are juxtaposed and combined to create very different stylistic atmospheres. The most impressive application of the modular technique is found in The Mission, where the single modules, more extended and clearly defined than before, interact dialectically, assuming very clear symbolic functions.

Morricone’s non-film works form a large and increasingly widely performed part of his output. Many of them use his technique of ‘micro-cells’, a pseudo-serial approach often incorporating modal and tonal allusions, which, with its extreme reduction of compositional materials, has much in common with his film-music techniques. His most fruitful season of concert-music composition began with the Second Concerto for flute, cello and orchestra (1985, from which the Cadenza for flute and tape of 1988 is derived) and continued with Riflessi (1989–90), three pieces for cello which represent perhaps the highpoint of his chamber music output, attaining a high degree of lyrical tension.

Morricone is an Officier de l’Ordre des Arts et des Lettres and a Commendatore dell’Ordine ‘Al Merito della Repubblica Italiana’. Among other honours, he has received four Academy Award nominations, a Grammy and a Leone d’oro. In 2000 he was awarded the Laurea Honoris Causa by the University of Cagliari. Between 1991 and 1996 he taught film music (sharing a post with Sergio Miceli) at the Accademia Musicale Chigiana, Siena.