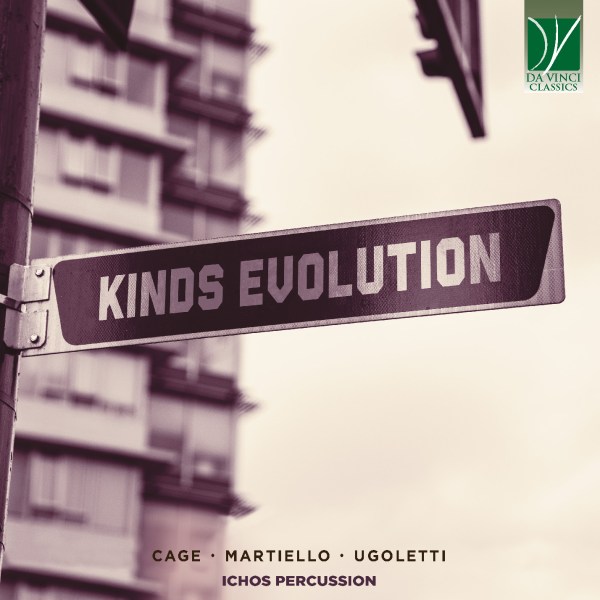 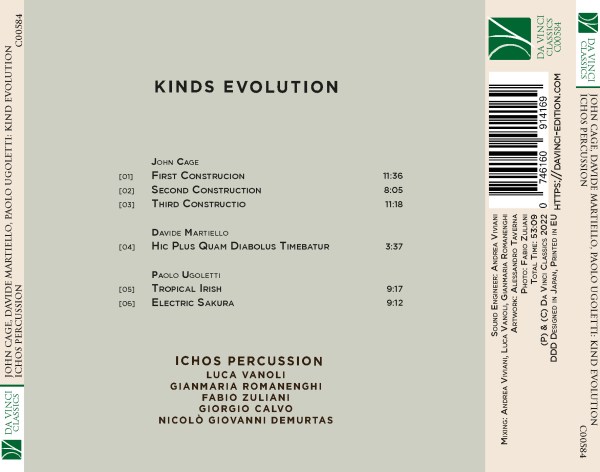 John Cage
First Construction
Sextet written for solo metal instruments and assistant. In this piece Cage introduced a compositional structure with fixed rhythms. This idea was decisive for his career and one of his cornerstones for almost 17 years. The basic structure of the piece is 4-3-2-3-4 in a single unit of 16 bars. The first part of the piece was called “expository” by Cage and the final “Coda”. The melody itself is built around sixteen motifs employed in strictly predetermined sequences. Both the use of certain ethnic percussion instruments and the technique of various rhythmic proportions were inspired by Henry Cowell’s lectures in which Cage participated.

Second Construction
A quartet for percussion that uses the same compositional scheme as First Construction but with a “fugal” nature. In this piece we can see the use of instruments already present in the previous construction, whose use was particularly dear to Cage, such as, for example, gongs and metallophone instruments used for the first time as the crotales (preferred in this composition to the more traditional glockenspiel that we find in the first one).

Third Construction
A piece dedicated to Xenia Kashevaroff, Cage’s wife at the time of its composition. The structure of the piece is the same as the previous two, as is the use of non-tuned percussion instruments (micro/macrocosmic), where the whole is reflected in the individual parts. The four performers play a wide variety of instruments, most of them ethnic: teponaxles, claves, maracas, quijadas and a wide range of tin cans. By combining the infinite possibilities of rhythm and timbre, Cage creates an absolute masterpiece with a “telescopic” structure that will become a cornerstone of the percussion repertoire.

Davide Martiello
Hic Plus Quam Diabolus Timebatur
Composition for percussion and electronics commissioned in 2020 by Ichos Ensemble.
Minimal and of short duration, the composition unites the worlds of the most recent “pop electronic music”
and contemporary music, starting from the composer’s personal research into types of synthesis and in particular on frequency modulation (FM) synthesis.
Based on pre-established calculations and selecting some of the results obtained in favour of the composition itself, the result is the one perceived when listening.
The title is inspired by the figure of Ezzelino III da Romano, a controversial figure who lived between the end of the 12th and the first half of the 13th century.
Bellicose and prone to violence and torture, he is also mentioned by Dante in the Inferno (Canto XII, vv. 109-110), celebrated by his sister Cunizza in Paradise in the Heaven of Loving Spirits, he was defined by Salimbene de Adam, a religious man and historian of his time, as ‘more feared than the devil’.
A figure to be contextualised in his own time, he died in Soncino, a town dear to his patrons
and the place where the ensemble and the composer met.

Paolo Ugoletti
Electric Sakura
What is more idiomatic of Japan than the cherry blossom festival?
This word brings to mind the Hanami, the pouring of multitudes of people into the cherry orchards with the sole purpose of admiring their beauty, their delicate scent, their inherent fragility. There is something amazing about this migration, especially when compared to the prosaic nature of our daily lives.
I imagined a very natural score: the suspended magic of the trembling pink petals is shaken and stirred by incursions of short gusts of wind that electrify the pink mantle, turning it into a bright shocking pink! But in the end the miracle returns.

Tropical Irish
What is music if not a land of freedom and fantasy in which, without hurting or being hurt, it is possible to stage the strangest plots and create the most unsuspected chimeras! The evocative power of mallets instantly brings to mind the warm music of the tropics with its pressing rhythms and angular, fractured melodies. The composer’s temptation is then to place alongside this very distinct sound reality something completely alien, something that does not fit in and thus sparks a reaction: Irish music in the tropics!

ICHOS PERCUSSION
Founded in 2016, Ichos Percussion performed in multiple and prestigious Music Festival all around the country, like:
“Donizzetti Night” and “Donizetti Music” from “G. Donizetti” theatre in Bergamo, “Le Stelline” music festival from “I Pomeriggi Musicali” Orchestra of Milan, “Biennale d’Arte Contemporanea” of Venice, “IWB” Seoul, South Corea, “Milano Classica” in Milan, “Festival delle Muse” , “Panorama Festival” , “Val d’Arno” jazz festival. The ensemble performed also in Spain, Germany, Russia, Austria, Swiss, China e South Corea. Ichos’s mission is to explore the world and the repertoire of this kind of music in all his facets. Also, we want to inspire the future generations of percussion players and show them the infinity possibilities of these wonderful instruments.