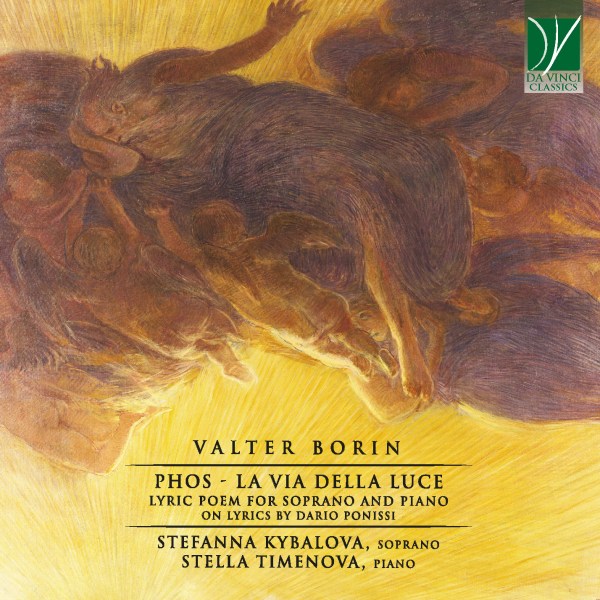 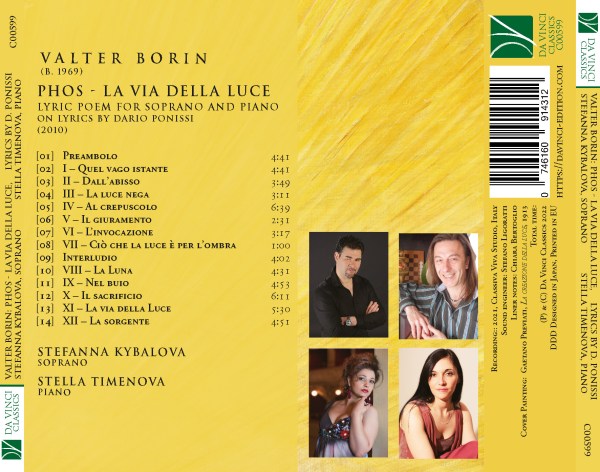 Stefanna Kybalova
Italian soprano of Chech and Bulgarian origin, in 2011 won the FIRST PRIZE ABSOLUTE to the prestigious competition for Verdi’s Voices in Busseto (Parma - Italy), chaired by José Carreras. In her biography, this was the latest of the eight awards she won since the beginning of his period of study, conducted at the Conservatory Verdi in Milan, Italy, where she graduated with honors. In 2003 (at age 22) she won also the 54th edition of As.Li.Co.,and she debut role of Ilia in Mozart's Idomeneo, and Amore in Orfeo from Gluck. She began her career prudently with the roles of the light lyric repertoire, as Gilda in Verdi's Rigoletto, singing at the Festival of Cheliabinsk in Russia, and in Busseto with Toscanini’s Foundation, Nannetta in Falstaff, and even with some roles secondary but larger contexts such as Frasquita in Carmen at the Arena of Verona in the seasons 2008 and 2009 conducted by Mr. Oren. Also directed by Mr. Oren, she was Garsenda in Zandonai's Francesca da Rimini at the Teatro Verdi of Salerno and after she debut the most hard role in the French repertoire, Mirelle from Gounod in the Miscolc’s Hungarian Festival. She worked with great conductors and directors like Seji Osawa, Marcello Rota, Daniel Oren, Roberto Abbado, James Meena and also Zeffirelli, Carsen, Giacchieri, Proietti, Daniele Abbado, Krief. She was recently in Seoul - Korea and she debut Mimi’ in La Boheme at the SETEC Art Center, and she was guest at LIGURIA NEW FESTVAL in Don Giovanni, singing the role of Donna Elvira, and Micaela in Carmen and also in two production of La Traviata. She sang Tosca in Teatro Alfieri in Asti and in Smetana Hall Praha, conducted by Marcello Rota where she had a great personal success. Her last performance in Violetta in La Traviata is greeted with a standing ovation at the Teatro Opera and Ballet in Sofia, and in 2014 at the Finnish National Opera she was Mimì in a new production of Puccini’s La Bohème where she literally left the audience in tears from her emotional performance. In 2015 her debut in Lady Macbeth’s Verdi in Bologna with Maestro Roberto Abbado, the critics define her voice as "torrential" capable of dramatic nuances and bel canto, at the service of a character who knows how to creep in with poignant color and intemerate treble. This debut together with her debut in Odabella in Verdi's Attila and Luisa Miller in Bologna and at the Verdi's Theatre in Trieste (Italy) give her the chance to get more noticed on the international scene and she was invited as a Guest in the role of Tosca at the Mainz Opera House in Germany and as Mimì in Puccini's La Bohème at the North Carolina Opera House, and in both Theatres she received excellent success with audiences and critics.

Stella Timenova
Bulgarian – Swiss pianist Stella Timenova was born in Plovdiv in 1982 in a family of musicians. She started playing the piano at age of five in her native city with Stella Oslekova and attended “Dobrin Petkov” National Music School. Three years later she gave her first recital and won the first competition prize. She successfully completed her studies and was awarded the Special Dobrin Petkov Prize for extraordinary musical achievements.
In 2000 Stella Timenova is admitted to the Sofia Conservatory in the piano class of Prof. Stella Dimitrova-Maistorova, who will accompany her years later in her master`s studies. Already during her studies, Stella Timenova performs as a solo pianist with major orchestras in Bulgaria and gives concerts at the leading festivals in her country.
In 2005 a scholarship from the Swiss Government takes her to the Academy of fine arts in Berne and into the piano class of Rada Petkova, which she completed with a Concert Diploma and highest distinction. She attended also master classes amongst others with Alexei Nasedkin, Sergey Markarov, Piotr Anderszewski, Christoph Berner, György Nádor, Sergio Azzolini and Carsten Eckert. Stella Timenova has performed in Bulgaria, Switzerland, Austria, Germany, Italy, France, Hungary, Turkey, North Macedonia and Slovakia. As a soloist she made in 2009 her debut with the Basel Symphony Orchestra under the baton of Daniel Klajner. Stella Timenova was awarded at numerous national and international competitions: Phos – Opera Discovery Milano; Odd Fellows, Berne; Nikola Stefanov, Sofia; Pancho Vladigerov, Shumen; Sergey Rachmaninoff, Pleven; Seiler, Sofia; Albert Roussel, Sofia, etc. She has also been supported by various foundations: Richard Wagner Foundation, The Guth-Dreyfuss Foundation, the St. Albanstift Foundation, the Heidy und Heinrich Bebié-von Gunten-Foundation and others. Stella Timenova is a sought after chamber musician. Amongst others, she has performed with the Galatea Quartet, the Gémeaux Quartet, the violinist Corina Belcea, oboist Céline Moinet, flutists Stéphane Réty, Aldo Baerten, Wally Hase. Her repertoire includes classical music from the Baroque to the present. She has released recordings and live broadcastings for the National Bulgarian Radio and Television and Classic FM Radio. Stella Timenova is co-founder and member of the jury of the annual Competition for Young Pianists “Stella Oslekova” held in her hometown of Plovdiv and dedicated to the memory of her beloved first piano teacher.

Valter Borin
A versatile musician who studied at the Conservatory of Milan, graduating brilliantly in Piano and Composition. At the same time, he also studied opera singing and conducting. He pursued a career as a first tenor at international level from 1998 to 2015. Since 2013 he has resumed full-time his career as a conductor, started in his youth, activity still conducted at international level.
He studied composition with Lorenzo Ferrero, Bruno Cerchio, Nicolò castiglioni, Irlando Danieli, Angelo Bellisario. In his production as a composer Valter Borin includes pieces for the most varied instrumental ensembles: from the solo instrument to symphonic and choral pieces. His very personal musical style, deliberately does not follow any trend, but conforms to an ever-present personal lyricism. Valter Borin is not a researcher or an innovator but rather an author who tends to reuse the musical material that has historically come down to us, trying to bend it to his own expressive purposes. For this reason, his catalog embraces many different styles, often mixed together. Lately, he has been developing research in music-therapy, which he is applying to some of his new works, in the conviction that certain music can also be helpful for many psychological problems.
In the lyrical poem "PHOS" Valter Borin has tried to find an equal balance between the piano and the voice: both are pushed to the highest levels of technical difficulty, but without either of them being overpowering. The virtuosity is not an end in itself but it is the result of a language that could perhaps be defined as "post-expressionist", and which has the task of underlining the poetic text of the story imagined by Dario Ponissi. The musical path undertaken with PHOS is a constant search to evoke action in music, through which he has tried to render actions, atmospheres, feelings, darkness and light in the notes themselves, imagining a sort of "soundtrack" of the story. The result of the collaboration with Dario Ponissi is also a delightful collection of lullabies written in five different languages.
Among the various pieces in the catalog of Valter Borin stand out the fantasy for orchestra "Dolphins of Malaga", and the sacred piece "Veni Creator Spiritus" for soprano solo, choir and orchestra.