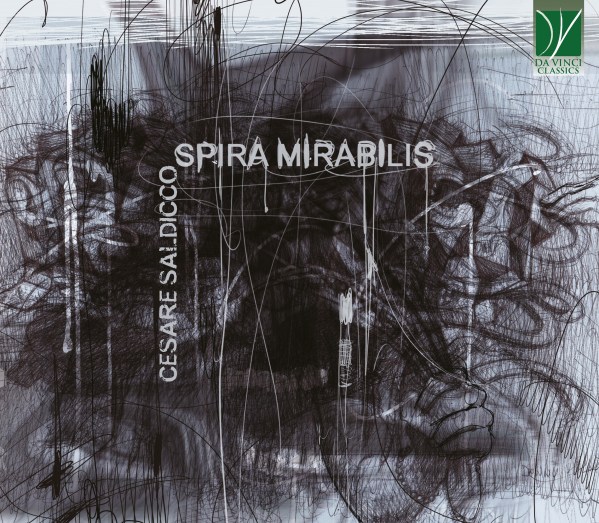 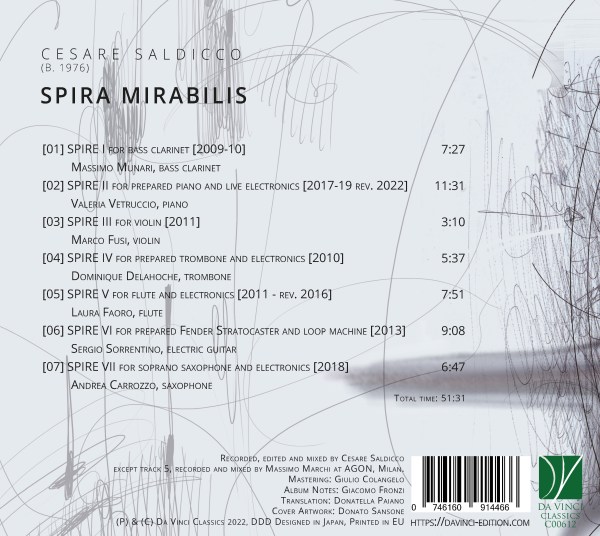 English
Spira Mirabilis is a research and writing project started in 2009 and dedicated to the solo instrument with or without electronics. All aspects – from formal processes to syntax elements, through the idiomatic language – revolving around the concept of spiral, both as a mathematical representation as well as inspiration and aesthetic speculation.
Spirals become formal metaphors of different musical gestures, especially in terms of timbre and directionality, that through reading and re-reading of the sound material lead the listener in a dimension of incessant research, as suggested by the Latin phrase eadem mutata resurgo, exploring the multiple labyrinths of the psyche, ego, consciousness, spirit, selfness.
Cesare Saldicco © 2022

Between time and eternity
Giacomo Fronzi
«He believed in an infinite series of times, in a dizzily growing, ever spreading network of diverging, converging and parallel times. This web of time – the strands of which approach one another, bifurcate, intersect or ignore each other through the centuries – embraces every possibility. We do not exist in most of them». Jorge Luis Borges, in the dazzling tale The garden of forking paths (1941), does not just provide yet another proof of his architectural and stylistic mastery nor just a thrilling detective story, but he forces us to reflect on time and its inextricable and labyrinthine plot. Circular, linear or, perhaps, spiral? Time, history, individual and collective existence unfold through paths, sometimes interrupted, whose shape and direction escape even our imagination.
Cesare Saldicco is a composer, multimedia artist and film-maker; with this recording he enters this complex plot, building a path divided into seven stages, at the same time investigative and speculative. The seven “spirals”, composed between 2009 and 2022, investigate the qualities and tonal possibilities of as many instruments (bass clarinet, piano, violin, trombone, flute, electric guitar, soprano saxophone), in their specific potential as well in the dialogue with the electronic dimension. It is an analytical, technical and electronic digging of considerable interest, which does not simply present itself as an essay of skill (of which Saldicco has already given countless proofs during his already rich career), but, in a broader sense, as a solid and convincing research on sound, captured in its materiality, sensuality, complexity. Challenging himself with a consolidated tradition and with very different instrumental techniques, Saldicco condenses his reflection on “spirality” into these seven “sound places”, within a movement that is both progressive and regressive, on the possibilities of something new and on the return of the previous, which is the same only in appearance. Playing with the time, expanding and contracting the silence, the composer unveils, step by step, a multidimensional and very historical landscape, despite its transitory drownings in a certain impalpable abstraction.
It is here, in this ideal point of convergence between time and eternity, that musical research and speculative research are combined. Saldicco’s musical thought appears, in this work, like a conceptual exploration that turns its gaze to some of the most disturbing and uncomfortable questions: what and where is the time? Time and temporality constitute the deep heart of any experience, as well as the only framework within which music exists. Everything exists in the time, and our existence, our identity, are inextricably linked to the perception of its flow. As Paul Davies wrote, this last one is «an interior experience, rather than corporeal”. And in particular we perceive the passing of time – a sensation so distinct and pronounced that it constitutes the most elementary aspect of our experience».
Saldicco takes the question of time and movement very seriously, focusing his attention on the “spiral”, a symbol of an unfinished circularity, of a productive imperfection, of a disturbing directionality. The spiral is also a labyrinth, which Saldicco translates into musical compositions, like in the ancient Greek culture, between the III and II centuries b.C., where the image of the labyrinth was associated with dance, as well as, symbolically, with initiatory paths oriented towards knowledge. «The experiences of the initiates to the Mysteries of Eleusis – writes Karl Kerényi in his Dionysus – are merged together in literature with a labyrinthine journey into the underworld. In the sanctuary of Eleusis there was not enough space for such convolutions; at most, there was space to dance in a circle in front of the sanctuary during the archaic period […] Sophocles, in a lost tragedy, named the labyrinth achanés. Later the word was explained, attributing to it the meaning of “roofless”, which perhaps is to be related to the fact that, in Knossos, a space for dance without a roof was shown with the name of “Labyrinth”. But the philosopher Parmenides, a contemporary of Sophocles, defines with that term an entrance with open doors. The meander and the spiral line allude to an open labyrinth which, if the conversion took place in the center, was a passage path leading towards the light ».  In conclusion, in Saldicco’s seven stages there were condensed traces of the history that marks the development of concepts, categories, symbols and questions. A settled story, from Spire I to Spire VII, that we find in the form of sounds, expectations and electronic articulations, within a refined narrative that is, at the same time, highly technical and profoundly speculative.

The Italian composer Cesare Saldicco starts to play the piano during his childhood and receives the superior diploma at Perugia’s Conservatorio in 1999. He achieves the Electronic Music diploma with Luigi Ceccarelli in 2004. Under the expertise of Fabio Cifariello Ciardi, he graduates in Composition, Counterpoint and Fugue in 2007. For his artistic development have been very important his encounters between 2005 and 2006 with Anders Hultqvist and Ole Lützow-Holm during the Erasmus scholarship in Sweden. Soon afterward he attends lessons and master classes with Philippe Hurel, Unsuk Chin, Oscar Strasnoy, Helmut Lachenmann, Gavin Bryars, Salvatore Sciarrino and Ivan Fedele, with whom he obtains the Ph.D. in Composition at the Accademia Nazionale di Santa Cecilia in Rome. Between 2000 and 2003 he also attended several master classes as a pianist with the jazz musician Stefano Bollani, which, in 2002, writes the liner notes for his first CD “Atlantide”. In 2002 the Italian National RadioRAI invites him as a pianist to the most important radiophonic jazz broadcast: Invenzioni a 2 voci. Winner of several scholarships (Erasmus, Acanthes, EdisonStudio etc.), he has been awarded in 2001, at the International Composition Competition “Città di Casarza Ligure”. In 2003 he is a finalist at the 2nd International Competition for Composers in Lamia (Greece). In 2006 Centro Tempo Reale, founded by Luciano Berio, selects him to form the Soundex project in Florence. In this project, he realizes the sound design for the exhibition “Radio FM 1976-2006” in the following cities Bologna, Modena, Padova, Bari, Livorno, Milano, Udine and Roma. In the same year he obtains the 2nd prize at the International Composition Competition “Sassi vivaci”. In 2007 he wins the 2nd prize at the International Composition Competition “Musici Mojanesi” and, always in the same year, he has been selected from CECh – Comunidad Electroacùstica de Chile during the VII International Festival of Electroacoustic Music. In 2009, the multimedia work “Cut up & Grain, Chapter 1: Life” conceived and created together with Antonino Chiaramonte, won a mention in the “36th International Competition of Electroacoustic Music and Sonic Art / Bourges 2009”. EmuFest in Rome selects his electroacoustic works in 2008, 2010, 2011 and 2013. CEMAT Federation includes his work “Naissances Latentes” scored for amplified cello, pre-recorded sounds and live electronics in a CD series named “Punti di Ascolto”, while, in 2012, the work “Digressione Ipertestuali N.10” has been selected by Musica Viva Portugal for the installation “Sound Walk 2012” at the Goethe Institut in Lisbon. In the same year “La Biennale di Venezia” invites him to produce a new electroacoustic work – “Still Life”- staged during the 56th edition of the festival. His music is edited and published by ArsPublica, Philology and Sconfinarte. His works have been performed in Australia, Austria, Albania, Belgium, Bulgaria, Canada, Chile, England, Finland, France, Germany, Greece, Italy, Malta, Portugal, Russia, Sweden, Switzerland, U.S.A. and broadcasted by Italian National RadioRAI. In the field of musicology, he had two series of lectures by titles “Contaminazioni sonore” and “Music and Architecture”, while in the field of teaching he developed an ear training software with Max/MSP. He published a book entitled “Mappe Sonore” about music education for primary schools. Recently the work I Camminatori. Resoconto audiovisivo per isole erranti (The Walkers. A Report) commissioned by Università degli studi di Milano-Bicocca and premiered at EXPO2015 has been selected and awarded in important film festival like the Los Angeles Film Festival, Toronto Film Week, New York City Electroacoustic Music Festival, Goldensun Film Festival, Phoenix Film Festival etc. Between 2009 and 2013 he has been head and artistic director of the Cultural Association G.E.R.M.I. (European Independent Music Research) and promoter of the homonym festival and composition competition. Starting from 2012 he is part of M()A a group of composers who develops site-specific musical projects. Currently, he is an Electroacoustic Composition teacher at Conservatorio “Antonio Vivaldi” in Alessandria.