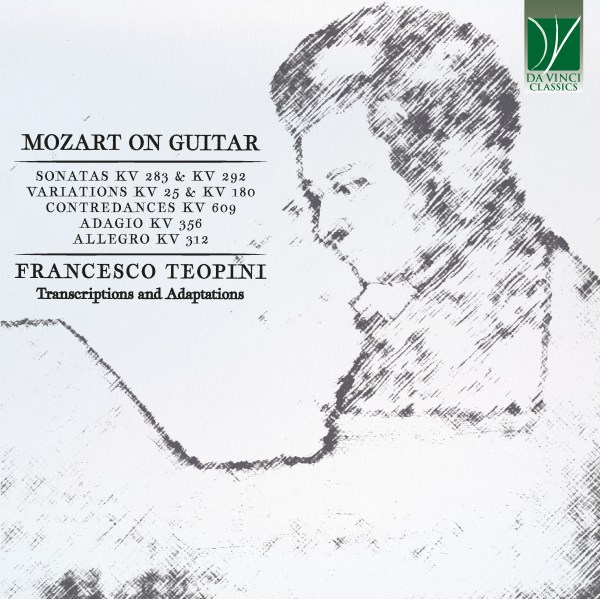 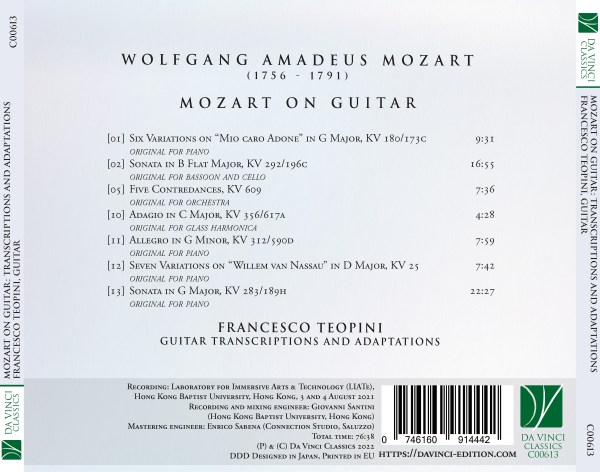 The repertoire recorded in this Da Vinci Classics album is varied and multifaceted. It includes two variation cycles. The Seven Variations on “Willem van Nassau” were written by a barely ten-years old Wolfgang during a childhood concert tour in the Netherlands. Together with the twin cycle KV 24 they represent a valuable and fascinating witness of Mozart’s talent at improvising variations. Those on “Mio caro Adone” pay homage to an opera by Antonio Salieri (whom posterity would unfairly depict as Mozart’s murderer!). Mozart heard the work in Vienna in 1773, and structured his free variations as a display of his compositional and technical prowess. The two Sonatas date from approximately the same years (1774-5). Sonata KV 283 is a remarkably concise creation; its original piano version lacks virtuoso elements but is suffused with an undeniable gracefulness. Sonata KV 292 clearly belongs in the same aesthetic climate, though its original scoring is more essential due to its idiosyncratic destination. As happened with the coeval bassoon Concertos, this piece was prompted by Mozart’s acquaintance with Baron von Dürnitz, who was an excellent piano player and a good amateur bassoonist.
The two short movements KV 312 and 356, by way of contrast, date from the penultimate year of Mozart’s life, when financial worries were deeply affecting his mood. The G-minor Allegro was written as the first movement of a projected Piano Sonata, whose composition aimed at solving (at least provisionally) some of Mozart’s economic issues. It is a charming movement, the only one Mozart actually wrote. The Adagio originally written for the blind Glassharmonika virtuoso Marianne Kirchgässer is a miniature masterpiece, worth standing side by side with other small-scale, enchanting works such as the coeval Ave verum. The Contredances KV 609, written the following year, Mozart’s last (1791), belong in a completely different atmosphere. Along with many other examples of this genre, they bear witness to Mozart’s activity as Imperial Royal Kammermusikus. In this capacity, he had to provide entertainment for the courtly feasts. Although this task was clearly below his talent, he nevertheless managed to infuse his unique fantasy, skill and creativity in these seemingly simple works.
Together, the pieces recorded here allow us to appreciate Mozart’s genius in the manifold declinations of his creativity. As Figaro would have said, “Se vuol ballare, signor contino / Il chitarrino le suonerò”.
Chiara Bertoglio © 2022

This recording features my transcriptions for (and execution on) the classical guitar of seven pieces composed by Wolfgang Amadeus Mozart for various instruments.
The life and music of Mozart have been a passion of mine since I was 12 years old, when my mother started to buy for me a collection of classical music recordings called La Grande Storia della Musica (issued by Italian publishing firm DeAgostini). The first recording featured in that collection was Mozart’s Jupiter Symphony, KV 551, conducted by Riccardo Muti: it was love at first listening! After that event, Mozart became one of the main musical inspirations of my teens, so much so that I attribute to him my early-in-life decision to become a professional musician.
Having started my guitar training at the age of seven, when I was around 15 years old I was willing to switch from guitar to piano due to my desire of playing the music of the great composers of the common-practice period, especially Mozart’s. Eventually, I decided to carry on my guitar studies, which ultimately meant devoting myself to a somewhat atypical repertoire compared to that of “mainstream” classical music. However, my desire to play Mozart’s music never really faded away…
In 2007 I transcribed my first Mozart piece for the guitar, i.e. the Sonata for Bassoon and Cello, KV 292, for a transcription exam which I needed to undertake at the Royal Academy of Music (London) as part of my academic requirements there. Since then, although immersed in other substantial music projects such as my transcription and recording of Johann Sebastian Bach’s Sonatas and Partitas, BWV 1001–1006 and my interdisciplinary-based musicological analysis of Mauro Giuliani’s Le Rossiniane, Opp. 119–124, I still entertained the idea of producing my own personal collection of Mozart guitar transcriptions. The definitive inspiration to resume working on this idea came from my discovery in 2018 of Manuel Barrueco’s transcription and performance of Mozart’s Piano Sonata in G Major, KV 283, featured in his CD titled Manuel Barrueco Plays Mozart and Sor (published by EMI in 1988). Various listening sessions of his transcription made me realize not only that arranging Mozart’s works on the guitar was more at reach than I thought, but also that my previous experiences on guitar transcription studies could be of significant usefulness to me, in order to implement a few changes to Barrueco’s version which could make it closer to my taste.
Throughout the relatively short 250-year history of the classical guitar, a substantial amount of Mozart transcriptions appeared in the market. A considerable number of 19th century guitarists – among whom Matteo Carcassi, Napoleon Coste, Mauro Giuliani, and Fernando Sor – predominantly wrote either transcriptions of or variations on Mozart’s themes, often extracted from his most famous operas. Guitarists who lived across the 19th and 20th century – such as Francisco Tarrega, Miguel Llobet, and Andrés Segovia – commonly arranged single movements from Mozart’s multi-movement works. Besides Manuel Barrueco’s arrangements (his recording also features his transcription of the second movement from the Piano Sonata in D Major, KV 576), other notable 20th and 21st century arrangements of Mozart’s works for the six-stringed solo guitar retrievable in published recordings and/or scores include (to name a few): the Adagio in C Major for Glass Harmonica, KV 356 by John Williams (John Williams and Friends, CBS Records, 1976, LP), two movements from the Divertimento in C Major, No. 2, KV Anh. 229 by Julian Bream (Classic Guitar: Giuliani, Diabelli, Mozart, Sor, RCA Red Seal, 1969, LP), the Piano Sonata in A Major, KV 331 by William Kanengiser (Rondo alla Turka: Brouwer, Mozart, Handel, Head, GSP Recordings, 1991, CD), the Piano Sonata in C minor, KV 457 by Tristan Manoukian (Les Productions d’Oz/Doberman-Yppan, 2011, score) and the Adagio in B minor for Piano, KV 540 by Carlo Marchione (MarchioneMusic Editions, 2016, score). In addition, Scottish guitarist Paul Galbraith transcribed and performed two piano sonatas and a short piece for his eight-stringed Brahms guitar, i.e. Piano Sonata in F Major, KV 280 (Paul Galbraith Performs Mozart, Bach and Britten, Mashulka Productions, 2009, CD), Piano Sonata in B Flat Major, KV 570, and the allemande from the Baroque Suite in C, KV 399 (Allemande: Paul Galbraith Plays Bach and Mozart, GuitarCoop, 2017, CD). Furthermore, in 2018 the guitarist and composer Paul Ballam-Cross published a paper in the journal Context titled “Finding New Repertoire: Transcribing Mozart’s Sonata, K. 292 (196c) for the Guitar”, in which he presents an analysis and the first published guitar transcription of Sonata KV 292. Nevertheless, there are some substantial differences between Ballam-Cross’ version and mine (recorded here), primarily concerning the use of the D scordatura on the sixth string: while he employs it in all three movements of the sonata, I only utilize it on the first movement due to my conviction that the articulations in the second and third movements are better performed by using a standard guitar tuning.
This recording is a one-of-a-kind project within the history of the guitar. The music featured in this CD consists of around 77 minutes of (mostly newly conceived) guitar transcriptions of complete single and multi-movement Mozart works, ranging from the Austrian composer’s first childhood compositions to those of his mature period. These transcriptions have all been arranged maintaining the original keys (although the works have been often transposed one octave lower), articulations and most (if not all) of the texture. Moreover, they have all been worked on for many years in order to make them sound like guitar repertoire, always bearing in mind the composer’s primary musical intentions and the use of a Mozartian touch. Despite the highly advanced technical level of these transcriptions, each single one of them is wholly attainable on the guitar, and a standard of musicality comparable to that to which Mozart listeners are accustomed is maintained. In addition, guitarists can use the classical guitar’s timbrical characteristics in order to evoke the instruments for which the repertoire was originally written. Ultimately, this recording provides a substantial amount of guitar transcriptions of original Mozart repertoire to the music-loving guitar amateurs and professionals who enjoy listening to (and possibly aim to play) the music of one of the greatest music composers of all times.
Francesco Teopini © 2022

Francesco Teopini
Highly commended by classical guitar personalities such as David Russell (“he has a bright future in his guitar playing career”) and Angelo Gilardino (“he was born to donate the gift of music to the audience”), Francesco Teopini is a classical guitarist, musicologist, and music educator currently based in Hong Kong.
As a concert artist, Francesco has performed in important international venues and music festivals for two decades; his performances and recordings have been broadcast by TVB, RTHK, Radio France, RAI, NPO, and RBB. A player whose interpretive proficiency encompasses a wide music repertoire ranging from the common-practice period to the 20th and 21st century, Francesco’s enthusiasm for contemporary music has led him to collaborate with the
Manson Ensemble, the Danilo Dolci Ensemble, and the Hong Kong New Music Ensemble under the baton of Diego Masson, Tonino Battista and Manuel Nawri. Recently, Francesco has worked with Italian composer Giovanni Santini as one of the ensemble members of Santini’s virtual reality opera, Essere.
Francesco’s first international release, J. S. Bach: Sonatas and Partitas BWV 1001–1006 (Brilliant Classics, 2016), has been receiving enthusiastic praises from audiences and experts alike as “[a] major undertaking […] show[ing] a deep understanding of these major works” (David Russell), “[an] intense and felt interpretation…[possessing a sound] endowed with warmth and attack but also power” (Diapason, France) and “a recording that achieves a beautiful sound and a dignified interpretation” (Melόmano Digital, Spain).
Francesco obtained his Diploma in Classical Guitar from the “G. B. Martini” Conservatory in Bologna (Italy) under the guidance of Michele Corbu, and the Postgraduate Diploma in Guitar Performance with Distinction from the Royal Academy of Music (London), where he studied with Timothy Walker, Michael Lewin, and John Mills. During his two years at RAM, he won the Blyth Watson Award and the Foundation Award, as well as the second prize title at the 2007 Julian Bream Prize. As one of the recipients of the prestigious Hong Kong PhD Fellowship Scheme, in June 2019 Francesco has been awarded a PhD in musicology from the Hong Kong Baptist University, where he is currently employed as a lecturer. During his PhD years, Francesco explored the famous Mauro Giuliani’s guitar potpourris called Le Rossiniane through the use of his own method of interdisciplinary analytical approach involving musicology and literary theory, based on the theory of Transtextuality by French literary theorist Gérard Genette. Francesco’s academic publication list includes articles in Malaysian Journal of Music and for The International Association for Word and Music Studies.