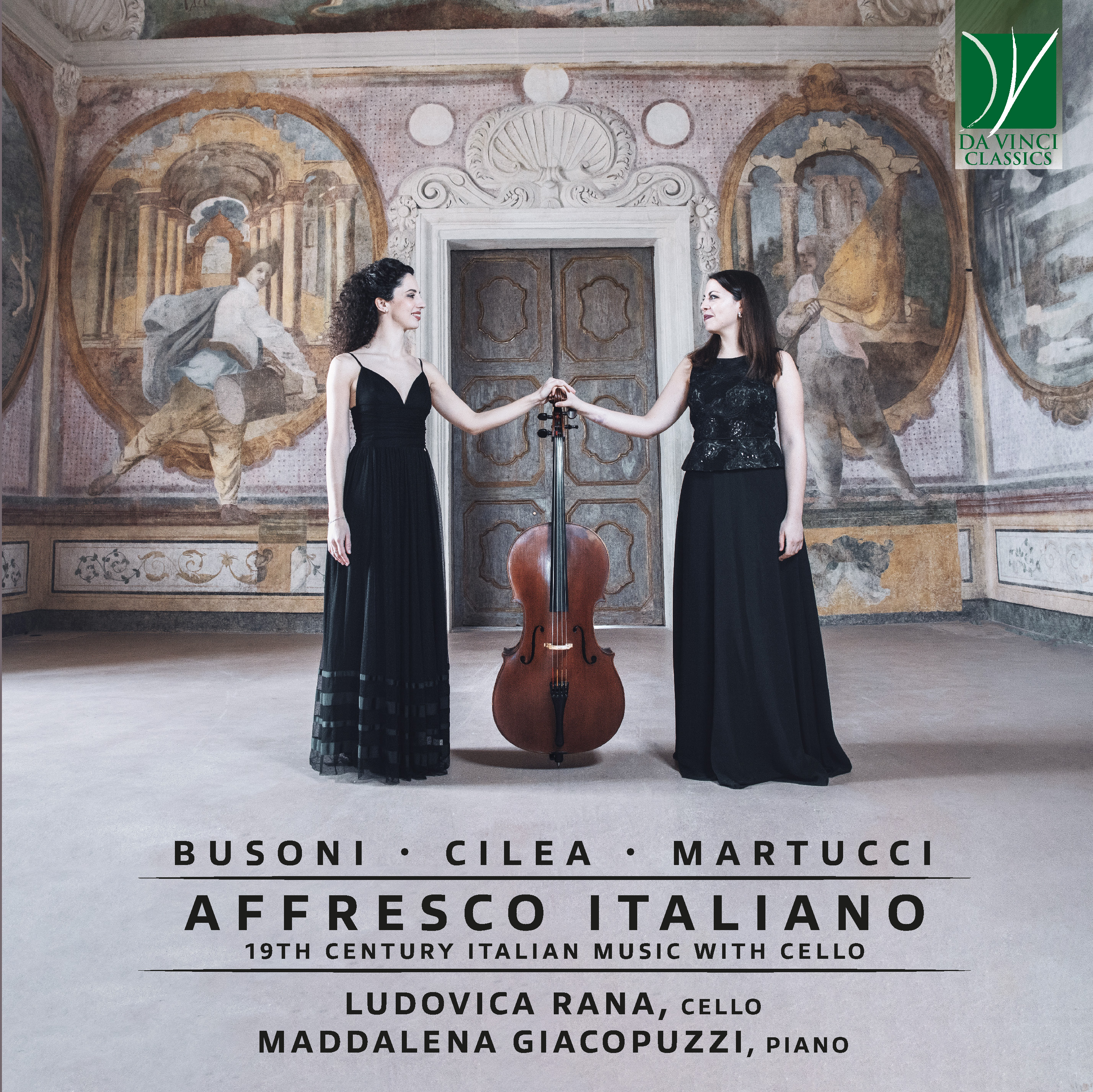 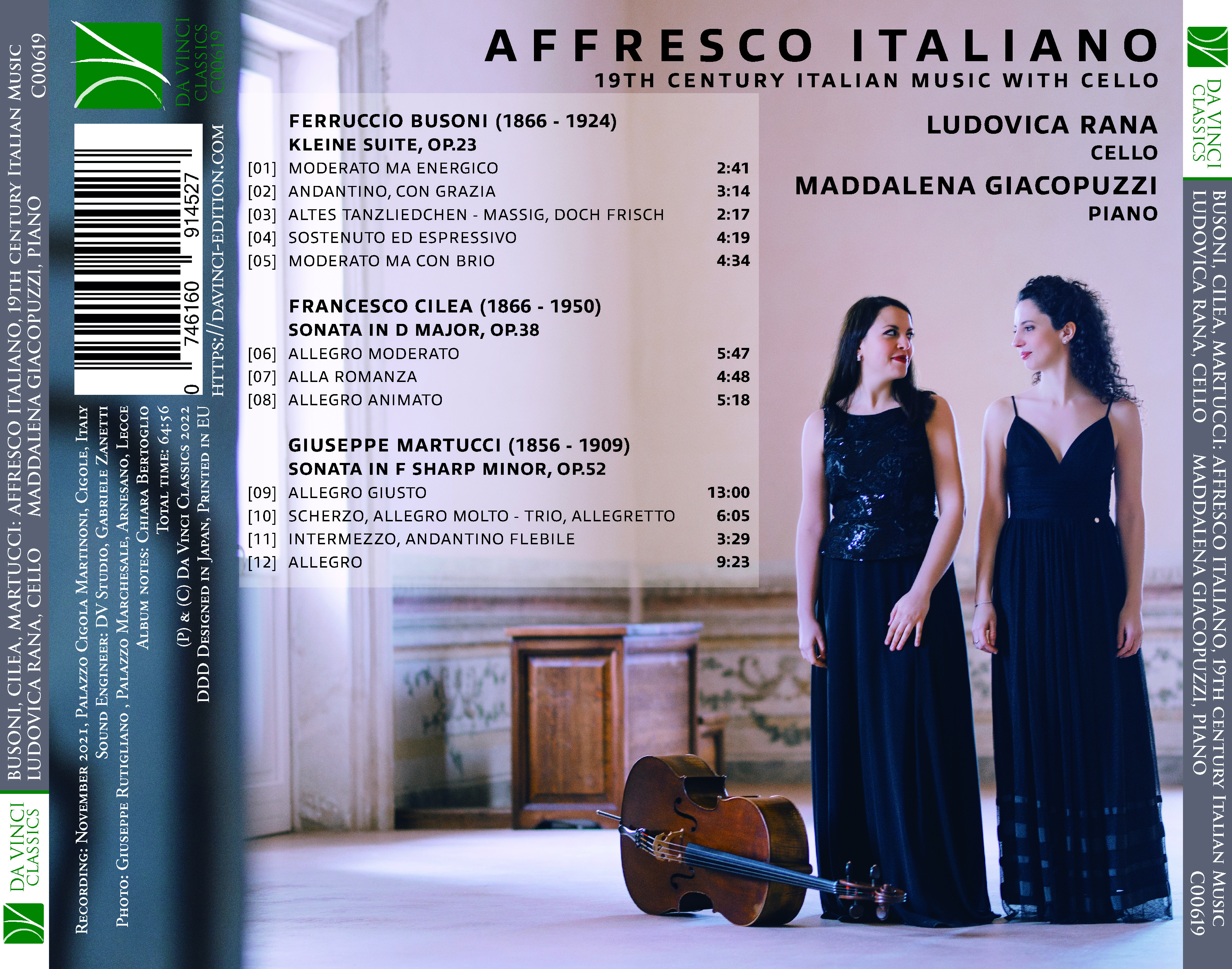 Ludovica Rana
Born in 1995 into a family of musicians, Ludovica started her career playing in important concert season such as the Società dei Concerti in Milan, Musica Insieme in Bologna, Cremona Mondo Musica, Musica Pura in Pordenone, Ritratti Festival in Monopoli, Fazioli Concert Hall, Messina Philharmonic Academy, Varignana Music Festival, I Concerti del Quirinale, Villa Solomei Festival, Classiche Forme Festival. There are also numerous collaborations in the area of Chamber Music, including those with her sister Beatrice Rana, Enrico Bronzi, Enrico Dindo, Pablo Ferràndez, Giovanni Sollima, Bruno Giuranna, Oleg Kaskiv, Francesco Libetta, Massimo Quarta, Danilo Rossi, Alessandro Taverna, Pavel Vernikov. She won prestigious competitions such as the 30th "Mario Benvenuti" Rassegna Nazionale in Vittorio Veneto, the "The Note Zagreb" Prize at the IX International Competition for young cellists "Antonio Janigro" in Croatia; in 2016 the First Prize at the International Music Competition "Vienna" Grand Prize Virtuoso and the "Young Virtuoso Award" at the 1th Manhattan International Music Competition in New York. In 2014 she won the 1st prize of the Special Section of the “Francesco Geminiani Prize” receiving the cello of Maestro Giovanni Lazzaro (Padua 2011) called "Furibondo"  for two years. Graduated in Cello in 2014 with full marks and laude at the "G. Paisiello" Music Institute in Taranto, Ludovica also studied with Enrico Dindo at the Pavia Cello Academy and at the Conservatorio della Svizzera Italiana. In 2020 she graduated with full marks and laude with M ° Giovanni Sollima, in the Specialization Course in Cello at the Accademia Nazionale di Santa Cecilia, Also at the same Accademia Nazionale di Santa Cecilia she obtains her diploma with full marks in the Advanced Chamber Music Course with Carlo Fabiano.
She teaches Chamber Music at Conservatorio “N. Piccinni” in Bari. Artistic Secretary of Classiche Forme-International Chamber Music Festival, since 2018 she is Artistic Director of the Sfere Sonore Concert Season in her city of Arnesano (Le), of the Chroma Season of the Koreja Theater of Lecce and of the Arnesano School of Strings Sistema Musica. She plays a Claude Augustin Miremont from 1870.

Maddalena Giacopuzzi has distinguished herself in the musical overview by winning the important Prizes in several National and International Competitions: in 2016 she won the Third Prize at the Rina Sala Gallo Piano Competition in Monza and in 2015 she won the First Prize at the 53rd “A. Speranza” International Piano Competition in Taranto and at the 6th Massarosa International Piano Competition. She was selected to take part to the final rounds of the Montreal International Competition in 2017, the Cleveland International Piano Competition in 2016, the Busoni Piano Competition 2017. She has performed as soloist with the Orchestra of the Arena in Verona, Orchestra Monteverdi of Bozen, the Haydn Orchestra of Trento and Bozen, the Orchestra Verdi of Milan, the Orchestra of Sanremo, Orquestra Sinfonica del Estado de Mexico under the baton of Berislav Sipus, Emir Saul, Stephen Lloyd, Carlo Tenan, Giancarlo de Lorenzo and Gabriela Diaz Alatriste. Maddalena Giacopuzzi was born in Verona in 1991. She began studying piano at the age of 5 years with Prof. Laura Palmieri and Prof. Ida Tizzani. She received the diploma at the Conservatory “E. F. Dall’Abaco” in Verona under the guidance of M ° Adriano Ambrosini and in April 2014 she graduated with the Master Degree with full marks, laude and a mention of honour at the Conservatorio “C. Monteverdi” in Bolzano, where she studied with M° Cristiano Burato. During the years 2010-2015 she attended the Accademia “Incontri col Maestro” in Imola where she studied with M° Leonid Margarius. In 2017 she completed the Artist Diploma at the Accademia Nazionale di Santa Cecilia in Roma, with M° Benedetto Lupo, receiving a scolarship offered by the Association Settimane al Teatro Olimpico. She was also named Fellow of the prestigious 2017 Music Academy Of The West in Santa Barbara, California, having the opportunity to perform, work, and collaborate with Guest Artists like Jeremy Denk, Jerome Lowenthal, Conor Hanick, Robert Mc Donald, Stephen Hough. Maddalena Giacopuzzi dedicates an important part of her musical activity to chamber music: she completed the Artist Diploma with a specialization in Chamber Music at the Accademia Nazionale di Santa Cecilia, where she studied with M° Carlo Fabiano.

Ferruccio Busoni: (b Empoli, 1 April 1866; d Berlin, 27 July 1924). Italian composer and pianist, active chiefly in Austria and Germany. Much to his detriment as composer and aesthetician, he was lionized as a keyboard virtuoso. The focus of his interests as a performer lay in Bach, Mozart and Liszt, while he deplored Wagner. Rejecting atonality and advocating in its place a Janus-faced ‘Junge Klassizität’, he anticipated many later developments in the 20th century. His interests ranged from Amerindian folk music and Gregorian chant to new scales and microtones, from Cervantes and E.T.A. Hoffmann to Proust and Rilke. Only gradually, during the final decades of the 20th century, has his significance as a creative artist become fully apparent.

Francesco Cilea: (b Palmi, Reggio Calabria, 23 July 1866; dVarazze, nr Savona, 20 Nov 1950). Italian composer and teacher. The son of a prominent lawyer, he was intended by his father for the same profession; however, the influence of Francesco Florimo, the famous archivist and friend of Bellini, procured him entry to the Naples Conservatory in 1879, where his teachers included Paolo Serrao, Beniamino Cesi and Giuseppe Martucci, and his fellow pupil Umberto Giordano. There he made rapid progress, becoming a maestrino in 1885. His Suite for orchestra (1887) was awarded a government prize and on 9 February 1889, his final year, his opera Gina was performed at the conservatory. Despite a poor libretto the editor Sonzogno thought sufficiently well of it to commission from him an opera on a fashionable low-life subject. La tilda was given with moderate successs at the Teatro Pagliano, Florence, with Rodolfo Ferrari as conductor and with Fanny Torresani in the title role. Sonzogno included it in his Italian opera season mounted later that year in Vienna, where it earned the gratifying approval of Hanslick. Cilea spent three years on the composition of his next opera, L’arlesiana, to a libretto based on Alphonse Daudet’s play, for which Bizet had supplied incidental music. The text of Rosa Mamai’s aria (‘Esser madre è un inferno’) was provided by Grazia Pierantoni, the wife of the senator in whose house Cilea was staying at the time. The opera was well received at its première at Sonzogno’s Teatro Lirico, Milan, where it helped to launch Caruso on his international career. Not until the following year, however, did L’arlesiana achieve its definitive three-act form.

In 1900 Cilea began work on his most famous opera, Adriana Lecouvreur, whose subject appealed to him because of its 18th-century ambience and its mixture of comedy and pathos. The première proved another triumph for Caruso as well as for the composer. At a season of operas mounted by Sonzogno at the Théâtre Sarah Bernhardt, Paris, in 1904, Alfred Bruneau singled out Adriana Lecouvreur as the worthiest product of the Italian ‘giovane scuola’. A projected collaboration with Gabriele D’Annunzio on Francesca da Rimini came to nothing owing to Sonzogno’s unwillingness to meet the poet’s financial demands. In his search for a subject that would offer a choral dimension Cilea turned to Gloria, a story of star-crossed lovers set in 14th-century Siena at the time of the siege. Despite the advocacy of Toscanini the opera was cooly received and failed to circulate; nor did a revised version of 1932 to a new text by Ettore Moschini fare substantially better. A last operatic attempt,Ritorno ad amore, foundered on Renato Simoni’s failure to complete the libretto. From then on Cilea ceased to compose for the stage. His only other large-scale work was the ‘Poema sinfonico’ Il canto della vita for tenor, chorus and orchestra, written to a text by Sem Benelli in commemoration of the Verdi centenary in 1913. The previous year Leopoldo Mugnone had conducted a revival of L’arlesianain Naples, for which he had persuaded the composer to enlarge the part of Vivetta and cut the aria of Rosa Mamai and her scene with L’Innocente. The result so disappointed Cilea that he withdrew the score from circulation for the next 20 years. It was not heard again until a radio transmission in 1932. The Museo Cilea in Palmi contains the manuscript of an unpublished ‘Intermezzo arlesiana’ dated 1938.

Until his retirement in 1935 Cilea pursued a distinguished career in musical education. He taught harmony and the piano at the Naples Conservatory from (1890–92), and held the chair of harmony and composition at the Istituto Reale (later the Conservatorio Luigi Cherubini) in Florence (1896–1904). In 1913 he assumed the directorship of the Palermo Conservatory, moving to that of the Naples Conservatory, a post which he held for nearly 20 years. He was elected to the Academy in 1938. Though justifiably proud of his record as a teacher, he regarded it as secondary to his operatic career, which he believed to have been blighted by the intrigues of others.

More of an all-round musician than most of his colleagues of the ‘giovane scuola’, Cilea shows a lighter touch. Besides Bellini, his chief gods were Bach, Beethoven and Chopin. An accomplished pianist, his keyboard writing is always inventive, and several of his pieces composed between the wars show an attempt to come to grips with the styles of Ravel and Casella. If his operas conform to the manner of Mascagni and his school, they never descend to brutal excess. Thematic recurrence plays an important part in them, even though the motifs themselves are rarely very theatrical. If Adriana Lecouvreur remains his most popular opera, largely due to its appeal to the aging prima donna, his best-loved single aria is the ‘Lamento di Federico’ from L’arlesiana, to this day one of the gems of the tenor repertory.

From The New Grove Dictionary of Music and Musicians

Giuseppe Martucci: (b Capua, 6 Jan 1856; d Naples, 1 June 1909). Italian composer, pianist and conductor. He was the most important non-operatic composer in late 19th-century Italy and played a versatile, highly influential part in the resurgence of Italian concert life after a period when it had been at a low ebb.