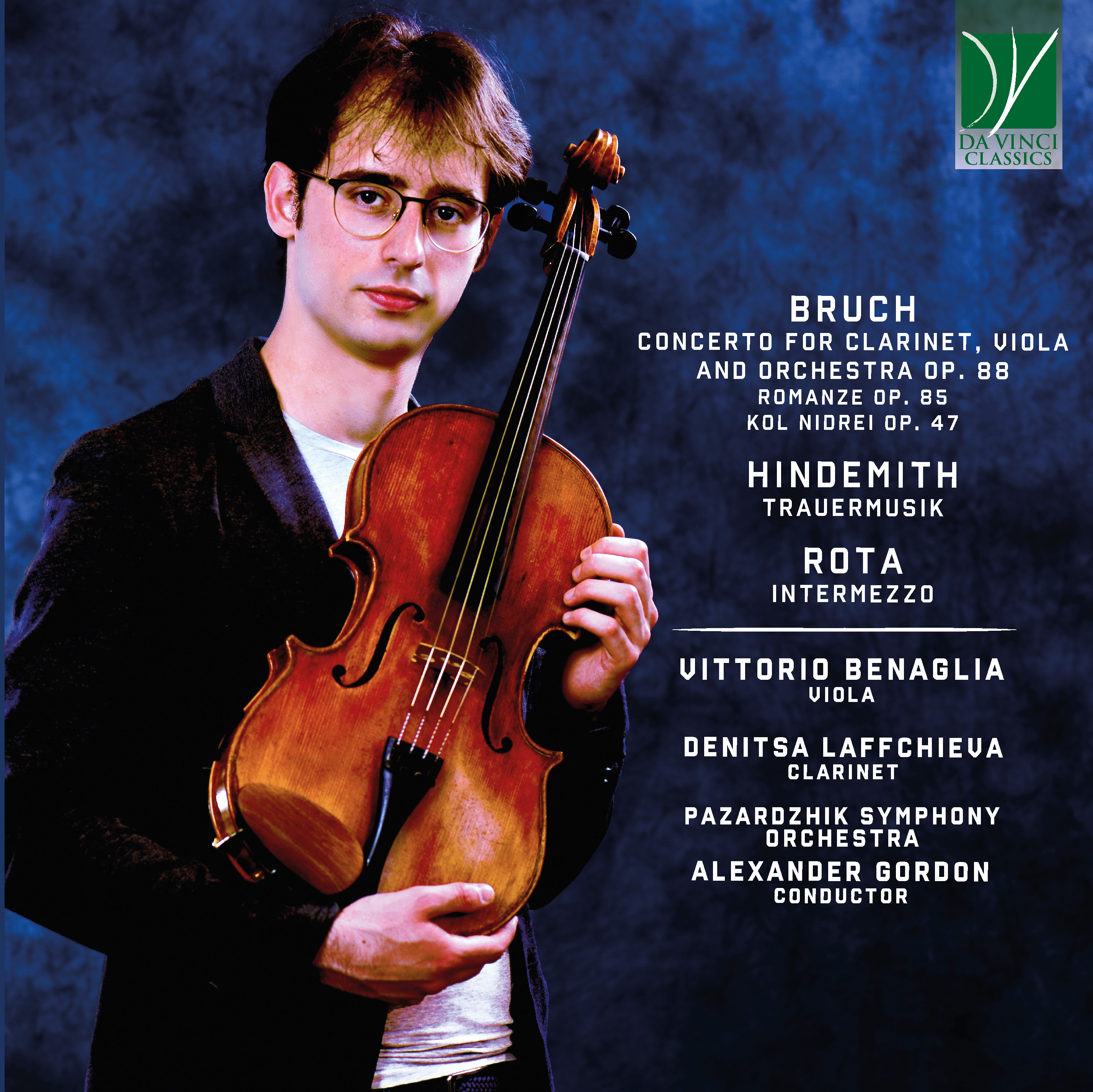 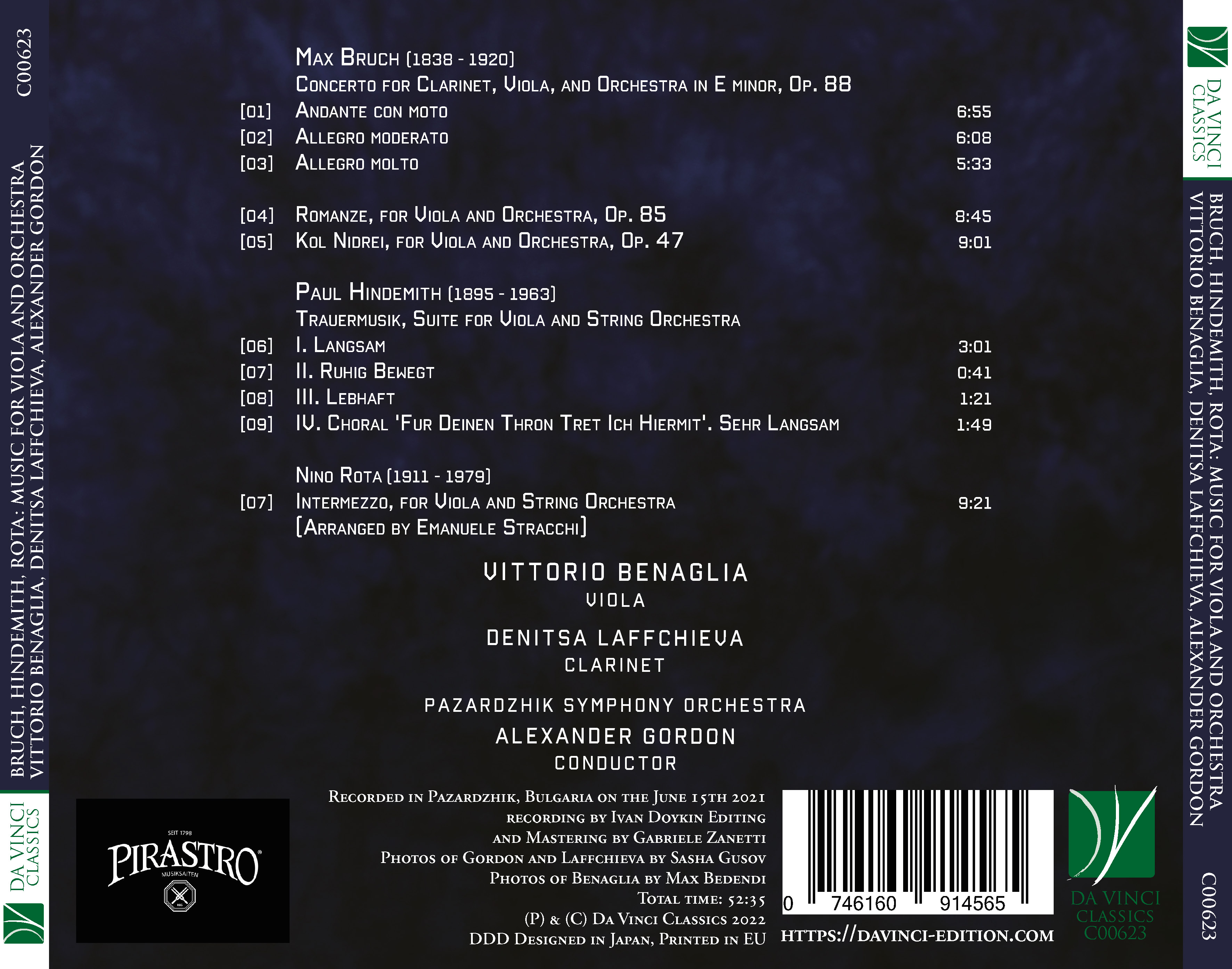 Alexander Gordon, conductor
As a protest against Russian aggression and the use of the letters “Z O V” as a symbol of Putin's regime he changed his surname from Zemtsov to Gordon in 2022. Alexander Gordon is one of the most versatile musicians of his generation, recognized as a soloist, chamber musician and viola professor. At the age of 23 he became section leader of the violas in the London Philharmonic Orchestra. After ten years in the orchestra, he left it in 2012 to devote himself entirely to his solo and conducting career. Some of the greatest international soloists played under his baton such as Misha Maisky, Simon Trpceski, Roman Simovic, Boris Garlitsky, Gordan Nikolic, Tabea Zimmermann and others. Alexander Gordon was appointed artistic director and conductor of the “International New Symphony Orchestra” (INSO) in Lviv, which gives it as a multinational German-Russian Ukrainian-Jewish musician the role as “Ambassador of Peace” with the aim of peace and conveying unity through music. In China he made his debut with the Liaoning Symphony Orchestra in Shenyang. He also conducted the Bulgarian National Radio Symphony Orchestra, the Mannheimer Chamber Orchestra, the Rijeka Opera Theater in Croatia, Orchestra Center Dortmund, Santa Cecilia Classica Madrid, Sofia Philarmonic Orchestra with Tabea Zimmermann and Misha Maisky as soloists. Alexander was assistant to Jukka-Pekka Saraste and Vladimir Jurowski at the London Philharmonic Orchestra. As an enthusiastic chamber musician, he performs regularly with Misha Maisky, Dmitri Sitkovetsky, Gerhard Schulz, Peter Donohoe, Natalia Gutman, Totlief Thedeen, Eldar Nebolsin, Maximilian Hornung, Pascal and Michel Moragues, Gordan Nikolic, Roman Simovic, Patrick Gallois, Jan-Erik Gustafsson and with the Utrecht String Quartet and the Schumann Quartet. Alexander Gordon also performs regularly as a soloist in Europe, USA, Asia and Australia, among conductors such as Neeme Jarvi, Vladimir Jurowsky, Leif Segerstam, Jukka-Pekka Saraste and Alexander Vedernikov. As a violist, Alexander Gordon has recorded for Chandos, LPO Live, Navis Classics, Naxos and Toccata Classics.

“Energetic and emotional...The ensemble played compact, intense and lively throughout, Contrasts, accents and dynamic nuances emerge...The performance on a remarkable Level under the direction of Alexander Zemtsov...” Rheinpfalz

Denitsa Laffchieva, Clarinet
The British-Bulgarian clarinettist Denitsa Laffchieva made her solo debut at the age of 14 with Sofia Philharmonic Orchestra. Numerous prizes at international competitions, prestigious awards and world premieres built her strong international reputation as a clarinet prodigy. Denitsa studied in some of the finest European music institutions – Vienna University of Music and Performing Arts with Prof. Peter Schmidl- solo clarinettist of the Vienna Philharmonic Orchestra, the Royal Academy of Music in London and at the National Academy of Music in Sofia with prof. Petko Radev-former solo clarinettist of Teatro della Scala di Milan. Aged 19, she was awarded ‘Musician of the Year’ by the Bulgarian National Radio. At the age of 23, Denitsa was the youngest musician ever to receive the Bulgarian Ministry of Culture’s award for ‘Great Contribution to the Bulgarian Culture’. In the same year, she also won the prestigious ‘Herbert von Karajan Foundation’ in Vienna, scholarship for Extraordinary Musical Talent. Denitsa made her Wigmore Hall debut recital in 2007 and her Carnegie Hall debut recital in 2008 followed by returns in 2009, 2010 and 2013. Dedicated chamber musician she regularly performs with world renowned musicians such as Viktoria Postnikova, Eldar Nebolsin, Ashley Wass, Julien Quentin, Roman Simovic, Jack Liebeck, Dmitry Sitkovetsky, Guy Johnston, Zholt Visontay, Jamie Walton, Lise Berthaut, Patrick Gallois and Alexander Zemtsov. Denitsa has recorded multiple times the clarinet concerto from W.A. Mozart for BMG, Ricordi and G7. Denitsa has recorded for many Radio and TV companies in the world like BBC London, Bulgarian National Golden Fond-Sofia, ITV, ORF, RFI, RAI, BNT, BNR and NHK. Since 2011 she has been Principal Clarinettist of Sinfonia Finlandia. With that orchestra together with Patrick Gallois she also performed as a soloist and recorded on Naxos label the highly awarded and acclaimed Cimarosa Ouverture CD.
From 2010 Denitsa Laffchieva held a Professor position at the University of Central Finland and from 2015 she teaches at the Richard Wagner Konservatorium in Vienna. Many of her students already enjoy international careers.
“Denitsa Laffchieva is amazing clarinettist; her performances are always to a highest level and fully deserve the highest acclaims!” Gennady Rozhdestvensky, conductor.

Vittorio Benaglia: He was born in 1999, he currently studies with Anna Serova and Alexander Zemtsov. He has performed as soloist in some of the most prestigious concert halls such as Carnegie Hall in New York, Wiener Saal of Mozarteum in Salzburg and Madinat Theatre in Dubai. He collaborated with artists and ensembles like David Geringas, Anna Serova, Marco Rizzi, Vittorio Ceccanti, Hugo Ticciati, Conductus Ensemble, Divertimento Ensemble and Cesar Franck Quartet.
He plays on a 1986 viola made by his grandfather, luthier Udino Lazzarin.

Max Bruch: (b Cologne, 6 Jan 1838; d Friedenau, Berlin, 2 Oct 1920). German composer. The son of a police official, Bruch received his first musical education from his mother, herself a singer. He began to compose from the age of nine; a Septet, written when he was 11, bears early hallmarks of his future style and assured scoring. At 14 he won the coveted Frankfurt Mozart-Stiftung Prize, which enabled him to study with Hiller, Reinecke and Ferdinand Breunung. His first substantial work was an opera based on Goethe’s Scherz, List und Rache, written and performed in Cologne in 1858 (no orchestrated version survives), after which his teachers encouraged him to travel throughout Germany. He went to Leipzig, a city whose musical life was still dominated by Mendelssohn’s influence, but settled in Mannheim between 1862 and 1864. There he wrote two works which would bring his name before the German public, the opera Die Loreley and the male-voice cantata Frithjof. The opera, based on the Rhine legend and to a libretto by Emanuel Geibel (Mendelssohn considered it shortly before his death), is most effective in the second act, in which the heroine enters into a pact with the river spirits. After a few successful performances in German and other European cities, brief revivals in Leipzig under the young Mahler (1887) and in Stuttgart under Pfitzner (1916), the opera disappeared from the repertory until stagings in Oberhausen (1984) and its British première in London (1986). Bruch wrote one further opera, Hermione (based on The Winter’s Tale), in 1870, but it had no success. Frithjof, however, was the first of many successful choral works which kept his name before the German public throughout his long life.

From 1865 to 1867 Bruch was music director to the court at Koblenz, and it was there that he wrote his first violin concerto, in G minor op.26, the work with which his name has always been associated (much to his distaste, for most of his other compositions were subsequently neglected). His friendships with such violinists as David, Joachim, Sarasate and Willy Hess, and the advice he received from them, inspired nine concerted works for that instrument, which ‘can sing a melody better than a piano, and melody is the soul of music’. The slow movement of op.26 is a fine example of Bruch’s ability to shape a melody. Between 1867 and 1870 he held a similar court post at Sondershausen and, after a freelance career as a composer until 1878, held conducting posts in Berlin (1878–80), Liverpool (1880–83) and Breslau (1883–90). He then directed a masterclass in composition at the Hochschule für Musik in Berlin (1890–1911), where he died at the age of 82, honoured but lonely and somewhat neglected as a composer. His utter distaste for and outspoken criticism of the New German School of Wagner and Liszt isolated him more and more throughout his life. His reverence for the music of Mendelssohn and Schumann and his resistance to change meant that works written at the end of his life, such as the chamber music of 1918, sounded much the same as those compositions dating from 60 years earlier, although his ability to orchestrate almost equalled his melodic invention. He wrote three symphonies (1868, 1870, 1882), all of which contain good material. Bruch was respected as a teacher in his later years, with Respighi and Vaughan Williams among his pupils in his Berlin composition classes. He was awarded an honorary doctorate by Cambridge University in 1893.

Bruch loved folk music as a source of melody, and many of his works were derived from such countries as Scotland (Scottish Fantasy op.46, Das Feuerkreuz op.52), Sweden (Serenade on Swedish Melodies op.posth., Swedish Dances op.63) and Russia (Suite on Russian Folk Melodies op.79b). During his Berlin years he conducted the Sternscher Gesangverein, a choir from whose Jewish members he received material used in his three Hebrew songs, published in 1888, and Kol nidrei op.47. Both works were written in Liverpool, where he succeeded Sir Julius Benedict as conductor to the Philharmonic Society for three somewhat turbulent years. He was appointed on the strength of the successful performances he conducted there of his secular oratorios Odysseus op.41 in 1877 and Das Lied von der Glocke op.45 in 1879. These large works, together with Arminius op.43, Achilleus op.50 and Moses op.67, were often performed and well received throughout Germany, particularly during the 1870s when the country was unified under Bismarck and the subject matter appealed to prevailing nationalist sentiments. However their appeal in the British Isles and the USA (he conducted several American choral societies on a visit in 1883) was somewhat short-lived, largely because of poor translations and anti-German feeling at the outset of World War I; nevertheless several performances have occurred in more recent years. Max Bruch’s precocious gifts remained largely unfulfilled for two reasons. He was an exact contemporary of Brahms and was forced to exist in the shadow of his greater colleague even beyond the latter’s death over 20 years before his own, and the stubborn resistance he maintained to musical developments largely instigated by Wagner stifled any of his own originality. Nevertheless his name will endure, if only thanks to one superb violin concerto.

Paul Hindemith
(b Hanau, nr Frankfurt, 16 Nov 1895; d Frankfurt, 28 Dec 1963). German composer, theorist, teacher, viola player and conductor. The foremost German composer of his generation, he was a figure central to both music composition and musical thought during the inter-war years.