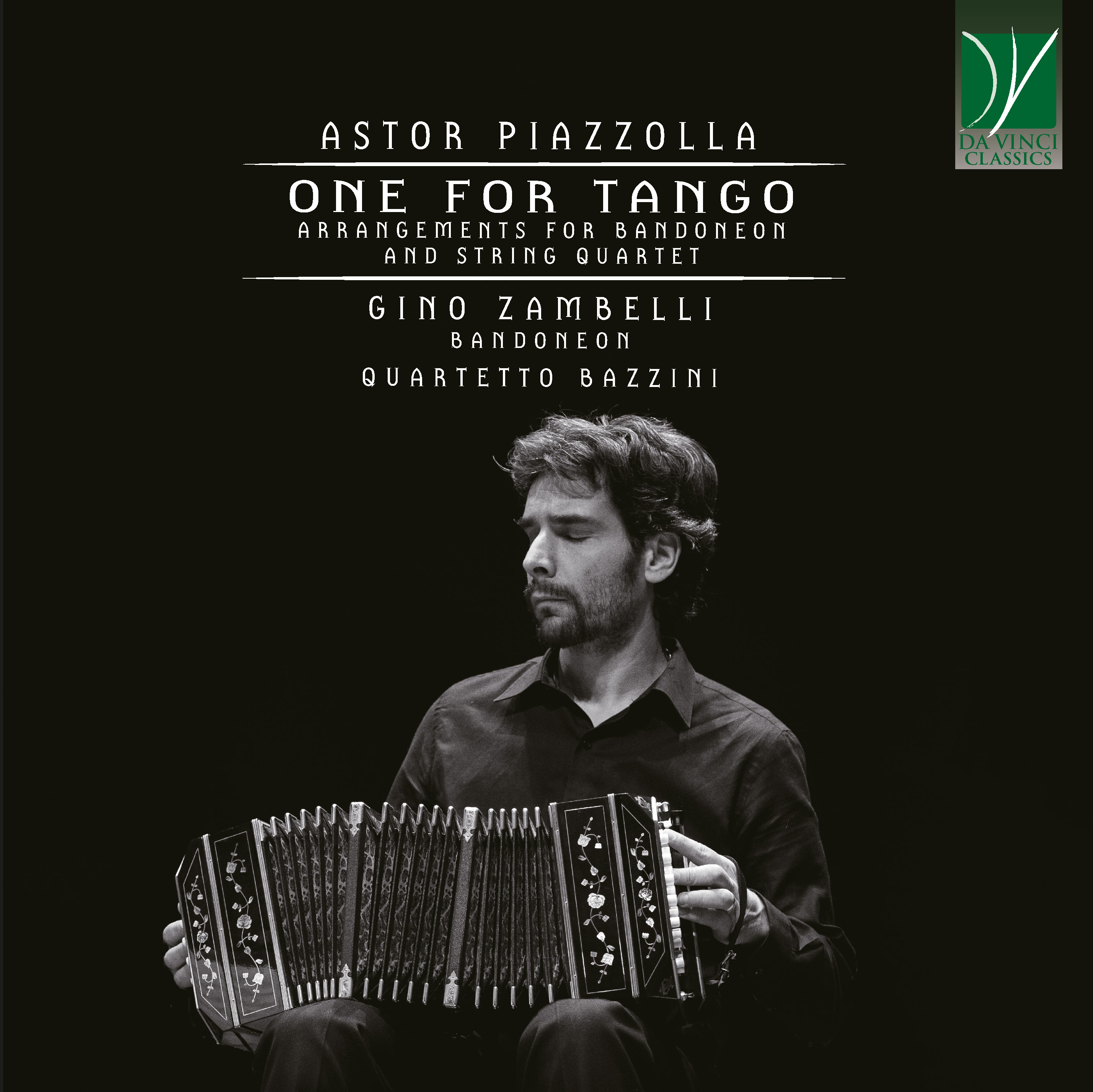 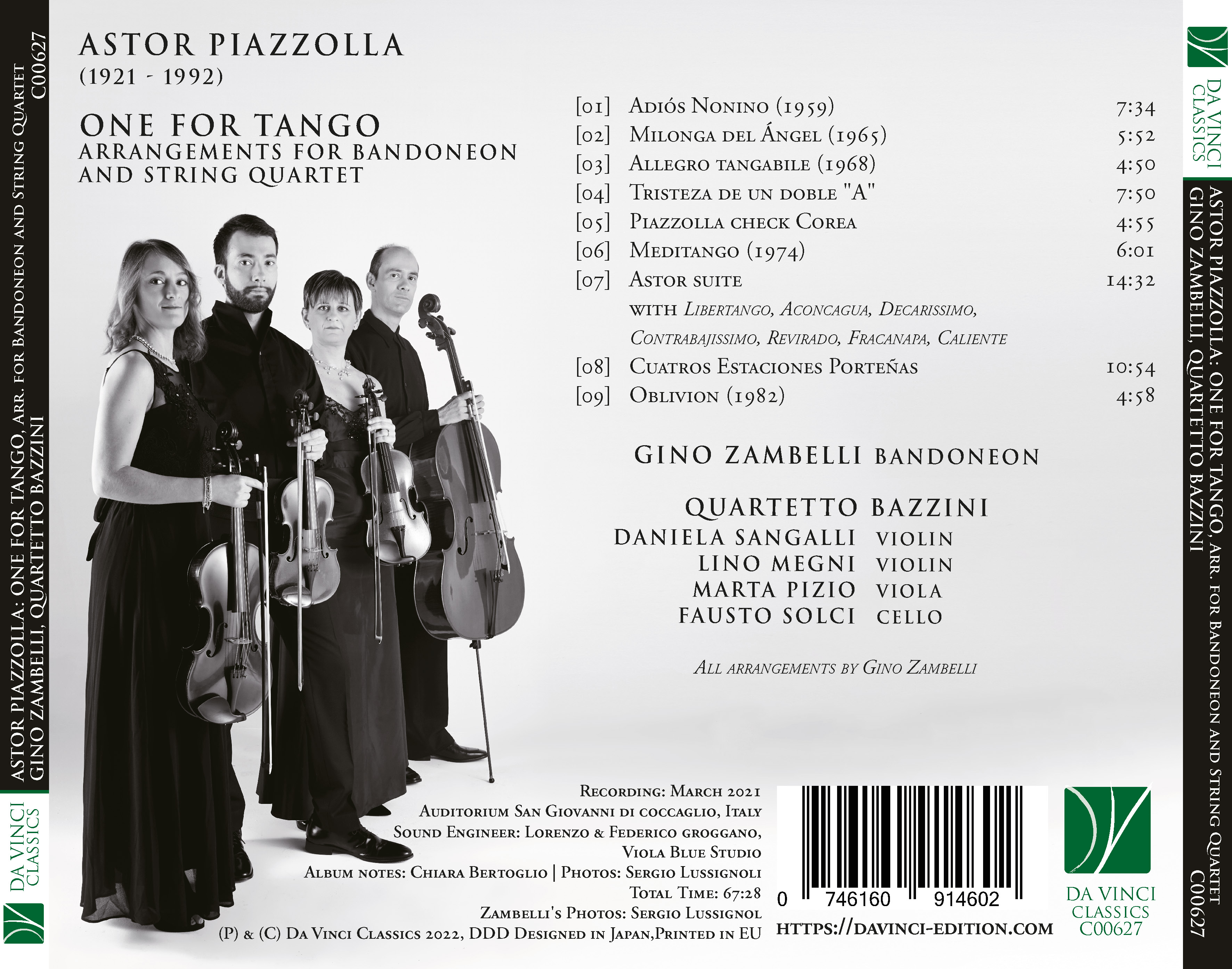 Piazzolla: One for Tango (Arrangements for Bandoneon and String Quartet)

Gino Zambelli
Originally from the Principality of Monaco, he graduated from the "Giuseppe Verdi" Conservatory of Milan in Jazz Accordion and from the Conservatory "Luca Marenzio" of Brescia in Oboe. An eclectic accordionist and bandoneonist who moves between classical music and improvisation, he is considered one of the best talents of the new Italian school of the accordion "(Amadeus December 2011). Since 2010 he has collaborated with the soloists of La Scala in Milan and has been working as a soloist in various national and international orchestras. He has played and plays with: Oscar winner Nicola Piovani, Francesco de Gregori, Peppe Servillo, Giusy Ferreri, Celeste i Moderni, Haifa webber, Tino Tracanna, Gianni Alberti, Guido Bombardieri, Paolo Alderighi, Fausto Beccalossi, Fulvio Sigurtà, Faraò, Vincenzo Albini , Simone Prando, Roberto Bertazzi, Oscar DelBarba, Paolo Pellegatti, Andrea Noferini, Giulio Tampalini, Ernesto Baroni, Federico Caldara, Luca Fanfoni, Marco Somadossi, Mauro Occhionero, Filippo Lama, Giuseppe Cacciola, Cinzia Milani, Anton Dresler, Luca Belleri, Roberto Plano, Javier Fernandez, Martin Troncozo, Laurianne Langevinne. He has recorded numerous records including: "Cantabile" by Nicola Piovani, with the Sony label; "Concerto for Accordion, Guitar and Orchestra" by Paolo Ugoletti, for the Brillant label; Amadeus disc of December 2011 for the 150th anniversary; "TrioAdar", for the Amadeus label; "The Snare duets" by Paolo Pellegatti, for the Limen Music label; "Chutzpah", for the Twelve Moons label; "GinasteraTango5", for the Movimento label, "Brick Dance" by Giuseppe Cacciola, with the Patahaus label; "Tango Invisible"; "Tango Pichuco"; "Baila" by Tonino Carotone, for the new music international label, La Realidad Que Vivo.

Quartetto Bazzini
“The Quartetto Bazzini play this music with a great sense of style and energy”- Stuart Sillitoe, Music web international. “Il faut saluer la liberté des musiciens et la prise de risque qu’ils ont osé” – Le Parnasse Musical Formed in 2010 and based in Brescia, the Bazzini String Quartet has always worked with the intention of rediscovering the unjustly forgotten repertoire of the italian composer Antonio Bazzini, a great violin virtuoso, teacher of composition and, for many years, director of the Giuseppe Verdi Conservatory in Milan. With its members, the Bazzini Quartet represents Brescia, Antonio Bazzini's hometown, where violinists Lino Megni, Daniela Sangalli and violist Marta Pizio trained, and Cremona, the city of the violin, where cellist Fausto Solci specialized. The Quartet's vast repertoire ranges from classical to romantic to contemporary, with special emphasis on the rare Italian quartet repertoire. The group has partnered in performance with important exponents of classical music such as Marco Zoni (principal flute of Teatro alla Scala in Milan), jazz and pop such as Gianluigi Trovesi and Antonella Ruggiero. From 2014 to 2016 they collaborated with the prestigious Società dei Concerti of Milan, making their official debut at the Gaber Theater in Milan for the 2015-16 concert season. Since 2017 they are regularly invited to present masterclasses in Guanghzhou (China) and perform concerts in the main local theaters like the Xinghai Music Hall. The Quartet was chosen to play for the special Cremona Musica Exibition in 2020 at the Auditorium Arvedi of the Violin Museum in Cremona. For the occasion, the Quartet played instruments from the Consorzio Liutai di Cremona. The Quartet recorded the CD Cattedrali with Antonella Ruggiero in 2015 for Sony Music. In 2018 its first CD Quartetti nos. 1 and 3 was released on the Tactus music label on the bicentenary of the birth of the Brescian composer; the album has been very well received by the international critics. In June 2022 their second work Quartetti nos. 2,4,5 will be released on the same label. The Quartet also recorded the contemporary music project Il Re Pazzo by Luca Natali Stradivari.