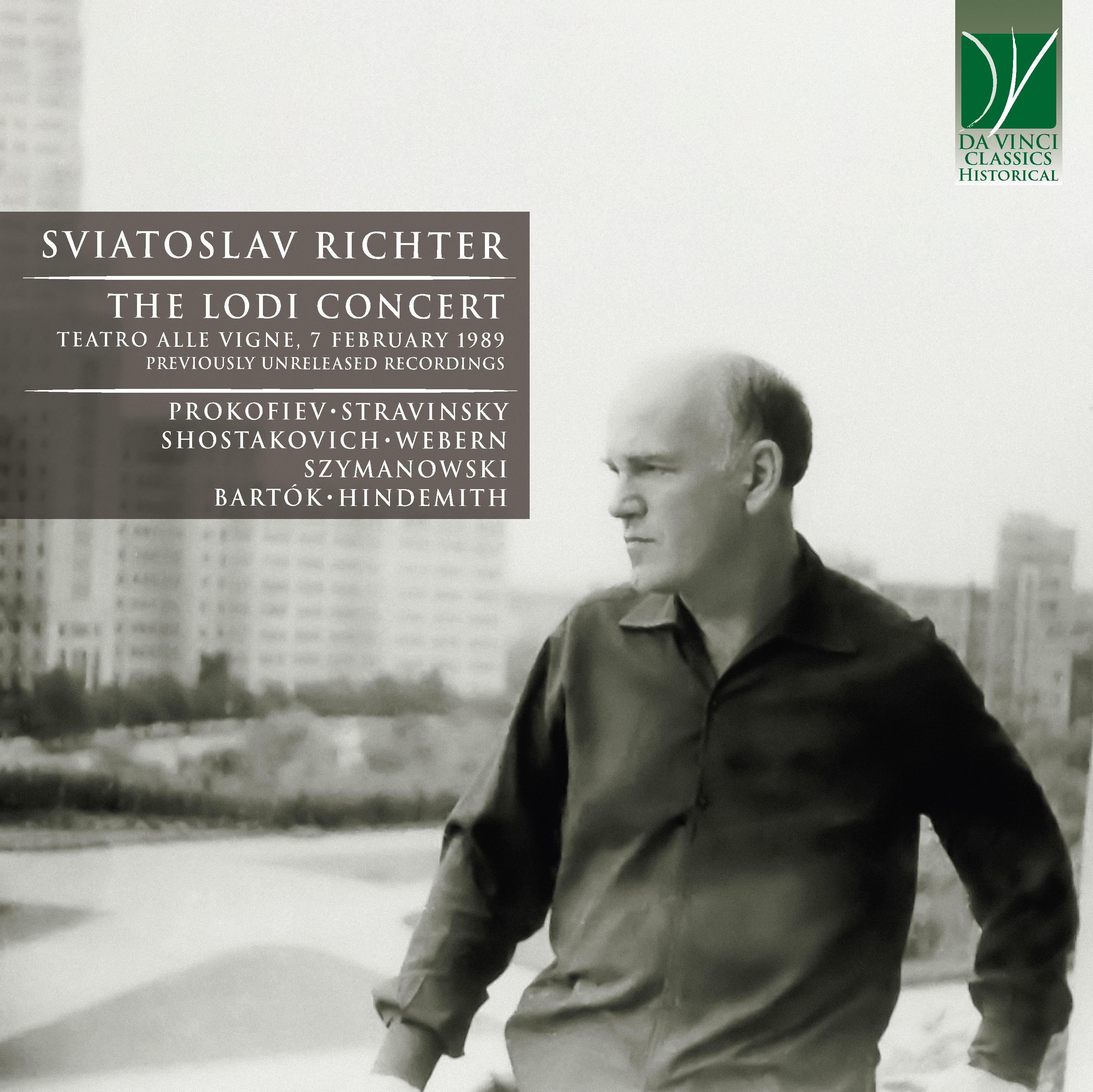 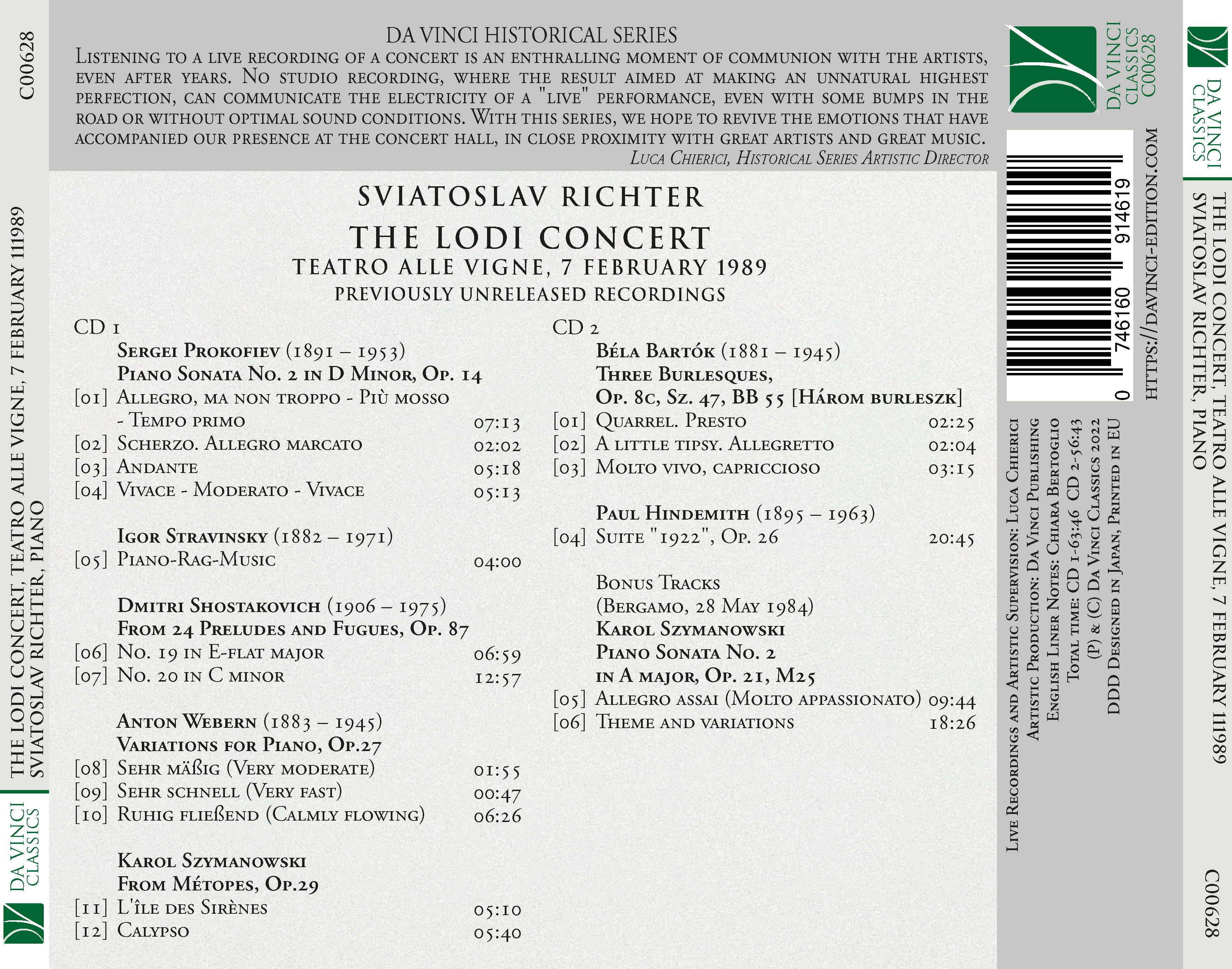 In the late afternoon of February 7th, 1989, we had to take an important decision in order not to lose an appointment which announced itself as unmissable. A recital by Sviatoslav Richter was advertised. It was to focus on twentieth century works, and to be held not in a comfortable Milanese concert hall, but rather at the Teatro alle Vigne, a deconsecrated former church in Lodi. This was a typical choice for the last stage of the great pianist’s career. He favoured unusual places, different from normal theatres and concert halls. He played with a score, lighted by a weak lateral lamp, not only due to evident problems of memory, but also, in that case, with the purpose of almost subverting a typical habit of concert life.
We had not taken into account a terrible fog. We soon realised that the only way to reach the small town, at the heart of the Po valley, would be to jump on a train – moreover, on a local train, the kind that stops at all stations. The train filled with potential audience and critics. This situation used to be relatively common once, and it allowed to chat at leisure about music and related events with knowledgeable people.
We arrived at the station with a biting freeze. We managed, I don’t know how, to reach the church, whose inside seemed bare and entirely uninviting. The concert began. Suddenly we forgot the difficulties of the short journey (even though all were worried about getting back to Milan), and it was as if we had been immediately sent into another universe. Richter’s authoritativeness was well known. His performing way brought you to another world, and, in that case, given the specific programme of the soiree, the listening process announced itself as particularly challenging. So challenging it did be (I had brought a few scores in order to follow the items I didn’t know well), that at the end I still remember getting a tensive headache, which, though, was not particularly unpleasant. It was rather the result of a state of total concentration, following the exceptionality of this event and the complexity of the performed works. Most importantly, it was the result of a superhuman effort, in order to try and follow the thread of the discourse imposed by the performer.
Listening back, today, to the recording of that evening, in a certain sense I relive the concentration of that moment, followed by the enthusiasm for the exceptional performance of Szymanowski’s Second Sonata, recorded five years earlier at the Festival di Brescia e Bergamo. This was an extraordinary example of music revealed in its fullest dialectics by a master of interpretation.
The five bars indicated as “Impetuoso passionate” which precede the exposition of the fugue subject (“Allegro moderato”) in the last movement, with the almost impossible “precipitando” sequence of chords, remain as an example of an absolute pianistic challenge, solved by Richter with extreme bravura and with a unique sense of expressive urgency.
Luca Chierici © 2022
Translation: Chiara Bertoglio

Sviatoslav Richter
(b Zhytomyr, Ukraine, 20 March 1915; d Moscow, 1 Aug 1997). Russian pianist. His father was a German pianist and composer who studied in Vienna and taught at the Odessa Conservatory. His mother, from a landowning family of mixed national background, had been a pupil of his father. Richter grew up speaking both Russian and German. His first love was painting, which he learnt from his aunt, with whom he spent three years between the ages of four and seven, cut off from his parents by the Civil War.

On his return to Odessa in 1922, Richter began to learn the piano and to compose, being largely self-taught in both areas. As a child he also wrote plays. His earliest musical passion was for opera. He enjoyed sight-reading from vocal scores at home, and for a while he had ambitions to become a conductor. From 1930 to 1932 he worked as accompanist at the House of Sailors in Odessa in order to supplement the family income, and then at the Odessa Philharmonic. He made his solo début playing Chopin at the age of 19, and in the following year became an accompanist at the Odessa Academic Opera and Ballet Theatre.

(b Eutin, ?19 Nov 1786; d London, 5 June 1826). Composer, conductor, pianist and critic, son of Franz Anton Weber. A prototypical 19th-century musician-critic, he sought through his works, words and efforts as performer and conductor to promote art and shape emerging middle-class audiences to its appreciation. His contributions to song, choral music and piano music were highly esteemed by his contemporaries, his opera overtures influenced the development of the concert overture and symphonic poem, and his explorations of novel timbres and orchestrations enriched the palette of musical sonorities. With the overwhelming success of his opera Der Freischütz in 1821 he became the leading exponent of German opera in the 1820s and an international celebrity. A seminal figure of the 19th century, he influenced composers as diverse as Marschner, Mendelssohn, Wagner, Meyerbeer, Berlioz and Liszt.

Dmitri Shostakovich: (b St Petersburg, 12/25 Sept 1906; d Moscow, 9 Aug 1975). Russian composer. He is generally regarded as the greatest symphonist of the mid-20th century, and many of his string quartets, concertos, instrumental and vocal works are also firmly established in the repertory. His numerous film scores, extensive incidental theatre music and three ballets are of more variable quality. In 1936, political intervention cut short his potentially outstanding operatic output; such interference continued to blight his career, belying the outward signs of official favour and recognition that increasingly came his way. Amid the conflicting pressures of official requirements, the mass suffering of his fellow countrymen, and his personal ideals of humanitarianism and public service, he succeeded in forging a musical language of colossal emotional power. The music of his middle period is often epic in scale and content; it has been understood by many Russians, and in more recent years also by Westerners, as chronicling his society and times, conveying moods and, as some would argue, experiences and even political messages in notes, at a time when to do so in words was proscribed. Since the appearance in 1979 of his purported memoirs, which expressed profound disaffection from the Soviet regime, his works have been intensely scrutinized for evidence of such explicit communication. However, his intentions in this respect continue to provoke disagreement, not least because of the problematic status of the sources involved. He published articles and made speeches under varying degrees of duress; for much of his life his correspondence was liable to be read by censors; he destroyed almost all letters sent to him; he kept no diary; and his reported confidences to friends and family are of varying reliability. Meanwhile, the musical dimensions of his works remain comparatively little examined. He played a decisive role in the musical life of the former Soviet Union, as teacher, writer and administrator. He was also an active pianist, frequently performing his own works until disability prevented him. His last concert appearance was in 1966

Paul Hindemith
(b Hanau, nr Frankfurt, 16 Nov 1895; d Frankfurt, 28 Dec 1963). German composer, theorist, teacher, viola player and conductor. The foremost German composer of his generation, he was a figure central to both music composition and musical thought during the inter-war years.

Sergey Prokofiev (b Sontsovka, Bakhmutsk region, Yekaterinoslav district, Ukraine, 11/23 April 1891; d Moscow, 5 March 1953). Russian composer and pianist. He began his career as a composer while still a student, and so had a deep investment in Russian Romantic traditions – even if he was pushing those traditions to a point of exacerbation and caricature – before he began to encounter, and contribute to, various kinds of modernism in the second decade of the new century. Like many artists, he left his country directly after the October Revolution; he was the only composer to return, nearly 20 years later. His inner traditionalism, coupled with the neo-classicism he had helped invent, now made it possible for him to play a leading role in Soviet culture, to whose demands for political engagement, utility and simplicity he responded with prodigious creative energy. In his last years, however, official encouragement turned into persecution, and his musical voice understandably faltered.