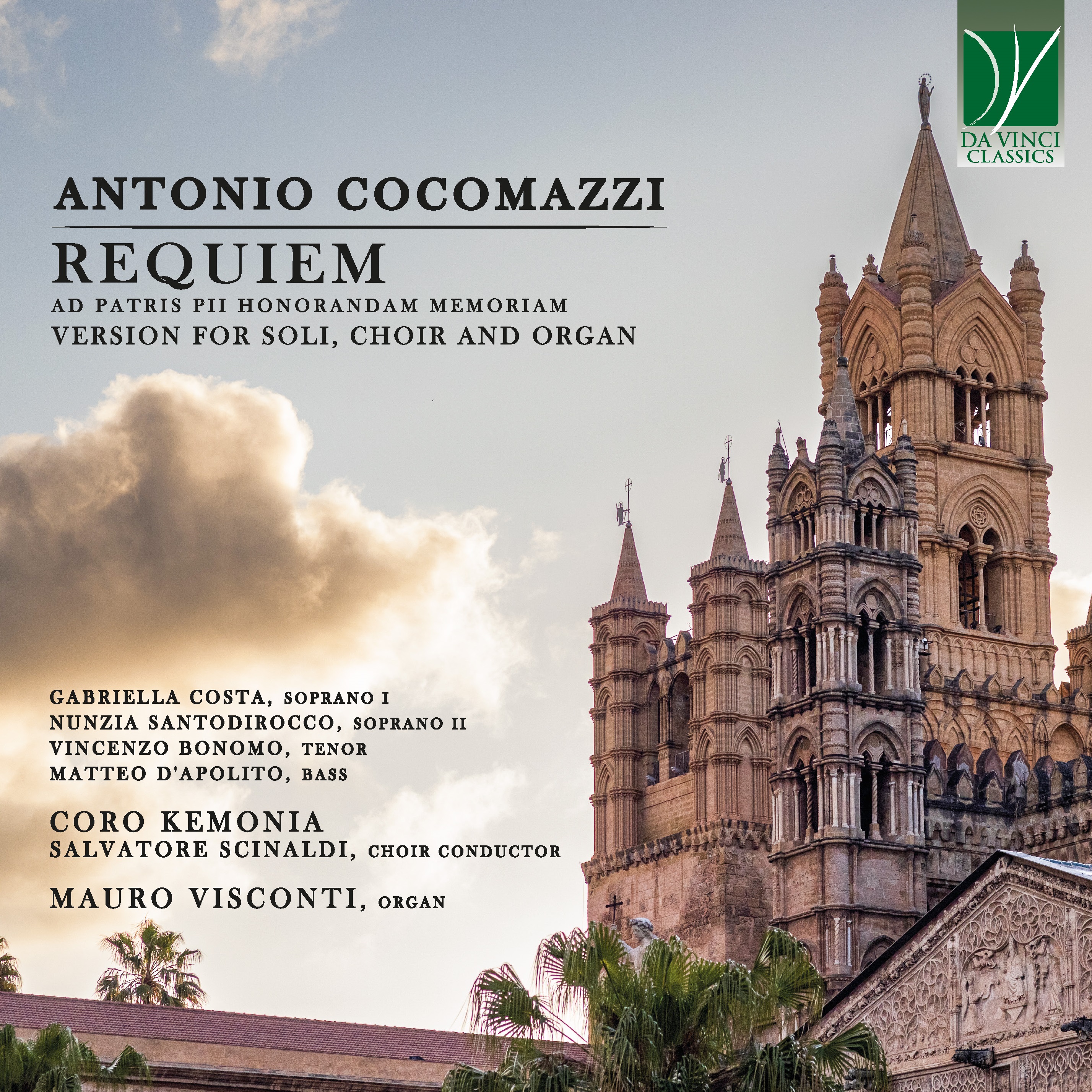 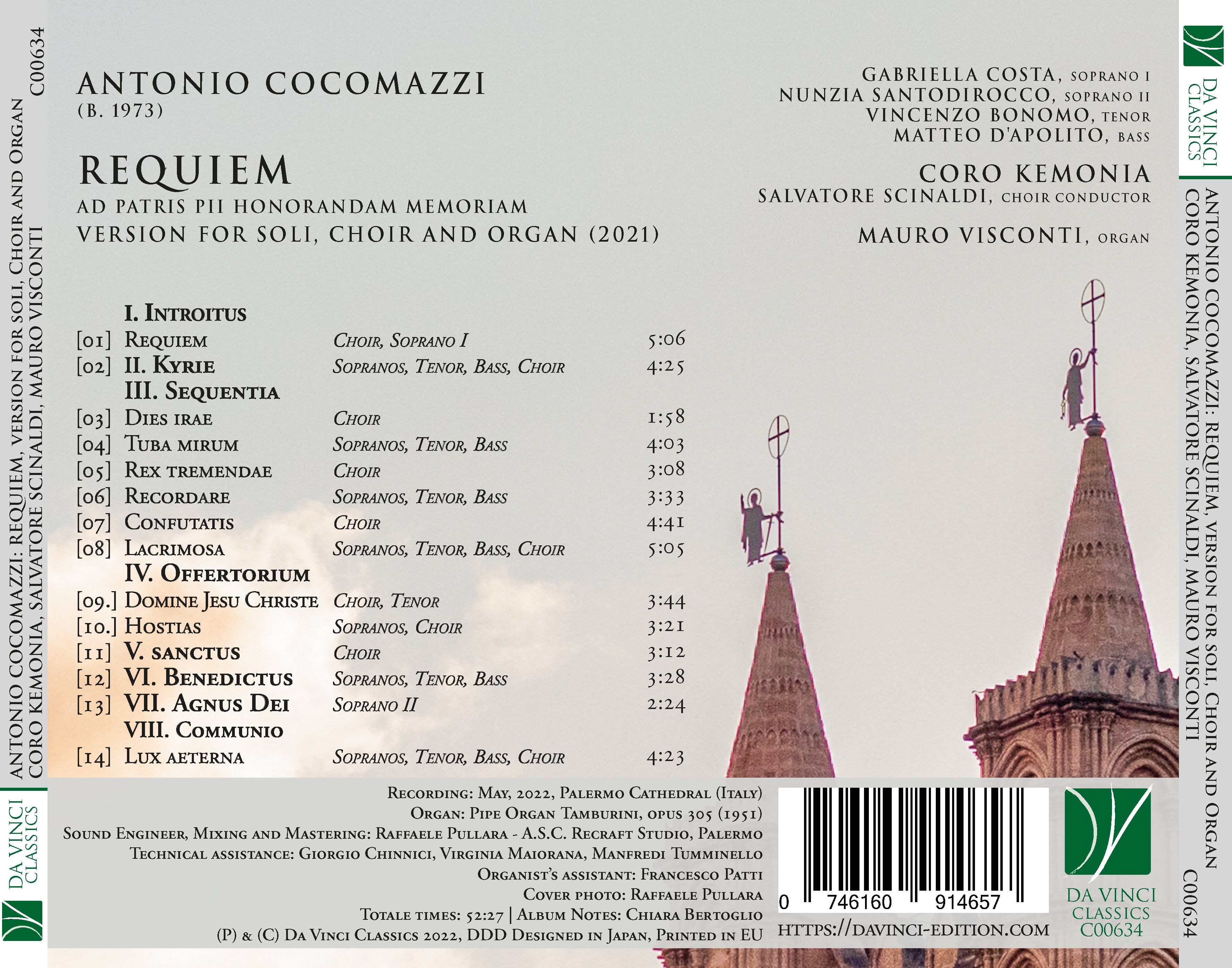 Coro Kemonia
Born in July 2014 with an organic formed with elements of the Liceo Musicale "Regina Margherita" and the Conservatory "A. Scarlatti" of Palermo. Its repertoire embraces numerous cultural realities focusing on a musical context that goes from the XX century until today. The choir debuts with its first performances at the Festival dei Nebrodi in Canto 2014. In 2016 the choir was involved in an international project that included a tour in the Middle East, which led it to perform in a Christmas Concert for the Arabic television network MTV Lebanon, performing songs in English, Latin, Arabic and Aramaic and in 2019 has recorded for Rai 5. The choir has won many international competitions and received the important prize the "Pigna d’Argento" plaque from the Accademia di Sicilia.

Matteo D’Apolito
Born in San Giovanni Rotondo. Graduated with honors from the Conservatory U. Giordano in Foggia. He has already debuted in the roles of Don Bartolo, Beaupertuis, Alidoro, Papageno, Don Profondo, Leporello, Escamillo, Selim, Schaunard, Dulcamara, Sacristan. He has sung in the main Italian theaters including the Teatro Regio in Turin, San Carlo in Naples, Carlo Felice in Genoa, Municipale in Piacenza, Giglio in Lucca, Alighieri in Ravenna, R.O.F. of Pesaro, Verdi Festival Parma, and abroad at the Seoul Arts Center, Varna Opera, Wexford Festival, Seoul Sejong Center, at the Coliseo in Buenos Aires and at the Wildbad Festival. He performed in concert the IX Symphony of L. W. Beethoven, La Petite Messe Solennelle by Rossini, the Requiem of G. Fauré. He has recorded for Bongiovanni Missa Grande by Saverio Mercadante, for Naxos Ser Marcantonio by Pavesi and for Sky Classica HD Giove a Pompei by Umberto Giordano in absolute premiere in modern times.

Mauro Visconti
Born in Palermo in 1973, Mauro Visconti completed his musical studies at the Conservatory ”Vincenzo Bellini" in Palermo with Salvatore Bellassai, Marco Betta, Marco Ghiglione, Giovanni La Mattina and Carmelo Caruso, graduating brilliantly in piano, choral music and choir conducting, organ and organ composition, composition and orchestra conducting. He holds the position of Chapel Master at the Cathedral of Palermo. He is also engaged in the teaching field as a full professor of Theory, rhythm, and musical perception at the Conservatory " V. Bellini " of Palermo and a member of the Academic Council. He has also been in charge of the artistic-disciplinary sector, Choir conducting and choral composition since 2012/13. He has been a professor of Musical grammar at the Faculty of Letters and Philosophy of the University of Palermo since 2013.

Nunzia Santodirocco
Critics have described her as "a soprano with a powerful voice, rich in harmonics, able to delight the public with her highly dramatic connotations”.
After graduating in both singing and piano, she immediately began a career that led her to sing the main lyric soprano roles in some of the most prestigious theaters around the world. Suffice it to recall here the following most recent engagements: "Aida" at the Arena of Verona, Julian Kovatchev conducting, and at the Teatro Verdi in Salerno, with Daniel Oren, as well as at the Daegu Opera Festival in Korea and at the Seoul Arts Center in a production by Teatro alla Scala; "Tosca" at the Cairo Opera House and at the Politeama Theater of Lecce; "Madama Butterfly" at the Seoul Arts Center (in a production of Teatro Petruzzelli, directed by Daniele Abbado), and in Kyoto (a production of Teatro Comunale di Bologna); "Un ballo in maschera" at the Cervantes Theater in Malaga in co-production with Opéra de Massy, and at the Politeama of Lecce; opera gala at the Tokyo Opera City Concert Hall.
The Italian Ministry of Foreign Affairs has invited her as representative of bel canto throughout the world (Uzbekistan, Georgia, Malaysia, Indonesia, Senegal, Bolivia, Ireland, the UK, Slovakia, Luxembourg, Czech Republic, Hungary). In 2007, upon the thirtieth anniversary of Maria Callas's death, she was chosen for the stage show "Callas Album", a test that proved her ability to "give voice" to The Divine in some of the most challenging numbers of her famously wide-ranging repertoire. On that occasion she started collaborating with Alberto Nones.
Her recordings include "Madama Butterfly" (Ricordi), "Lo sposo burlato" (Bongiovanni), "Giuseppe riconosciuto" by Anfossi (Fonè) and the Complete Oratorios by Carissimi (Brilliant Classics).

Salvatore Scinaldi
Composer, arranger, pianist, orchestra conductor and choir conductor. He has collaborated with important cultural and musical institutions such as Teatro Massimo and Orchestra Sinfonica Siciliana of Palermo, Torre del Lago Puccini Festival, the National Theatre in Malta, the Julliard School Orchestra of New York, the Festival dei Due Mondi in Spoleto, the Philarmonic of Oradea in Romania and Roma Sinfonietta, Orchestra of the Comunale di Bologna and the National Philarmonic Orchestra of Syria, Stavanger Konserthus in Norway, Beirut Chants Festival. He has collaborated with artists and musicians known all over the world such as: A. Rosand, R. Koelman, R. Bobo, Uto Ughi, N. Mazzanti, E. Dara, R. Panerai, R. Bruson, M. Freni, N. Ghiaurov, D. Barcellona, L. Gallo, O. Romanko, S. Alaimo, K. Ricciarelli and famous conductors such as M .J. Stringer, M. Honeck. He teaches Piano in the department of Didactic of Music at the Conservatorio " Gesualdo da Venosa” in Potenza.

Vincenzo Bonomo
He studied as a lyric tenor at the A. Scontrino conservatoire in Trapani and after just two years performs in his first Opera “Gianni Schicchi” by Giacomo Puccini with Maestro Rolando Panerai. His commitment in studying and performing drives him since the early years of his career.
After completing his studies at the conservatoire he joins the school for singers Beniamino Gigli in Recanati to improve and refine his vocal skills under the supervision of maestro Robleto Merolla who will become his mentor.
Many years of solo career in the Macerata Opera Festival, in operas in Italy and abroad like Boheme, Traviata, Lucia di Lammermoor, Barbiere di Siviglia, Pagliacci (playing the role of Arlecchino) give him the necessary experience and maturity to pass an admission selection for Palermo’s Teatro Massimo in 2005 as a soloist and a member of the chorus.

Antonio Cocomazzi
He received a degree in Piano and Composition from Conservatories of Foggia and Pescara. He’s the winner of thirteen international and national competitions thanks to the performances of his compositions. As a composer/pianist he recorded ten CDs to his name. Illustrious artists signed the liner notes to his albums including Ennio Morricone (Antonio Cocomazzi Project, 2008) Giorgio Gaslini (Suite for friends, 1997), and Giovanni Sollima (Restart, 2018). He recorded the album “Restart” in Duo with saxophonist Mario Marzi and with various formations “Nonostante tutto” (2005), both original composition projects are dedicated to saxophone. “Pensieri” is an album for piano and string quartet (2008), it was published by RAI Com and it’s currently used as a soundtrack of RAI documentaries and docufilms. “Notturno” (2021) is the first album where he plays as a solo pianist and it is an anthology of 17 recorded own compositions and then reinterpreted with other formations at the piano. He is the author of almost 300 works ranging from chamber to orchestral music and from solo piano to compositions for choir and orchestra. “Requiem” (1999) for soli, choir and orchestra, the Opera “Ramleela” (2014), which was performed in New Delhi (India) in 2014 with an interesting piece including opera, music, dances, and Indian theater, and the Kinderoper “Piccoletto, ovvero la Storia del piccolo spazzacamino” (2008) for soli and orchestra have particular importance. His multifaceted sonorous world is fully expressed in live performances, as a soloist, and in various chamber ensembles, and it is characterized by a natural merger of classical, jazz, and ethnical sounds that evolve into a personal language. It is also open to improvisation and contamination. He is currently a professor of Harmony and Analysis at the Conservatory “S. Pietro a Majella” in Napoli, Italy.