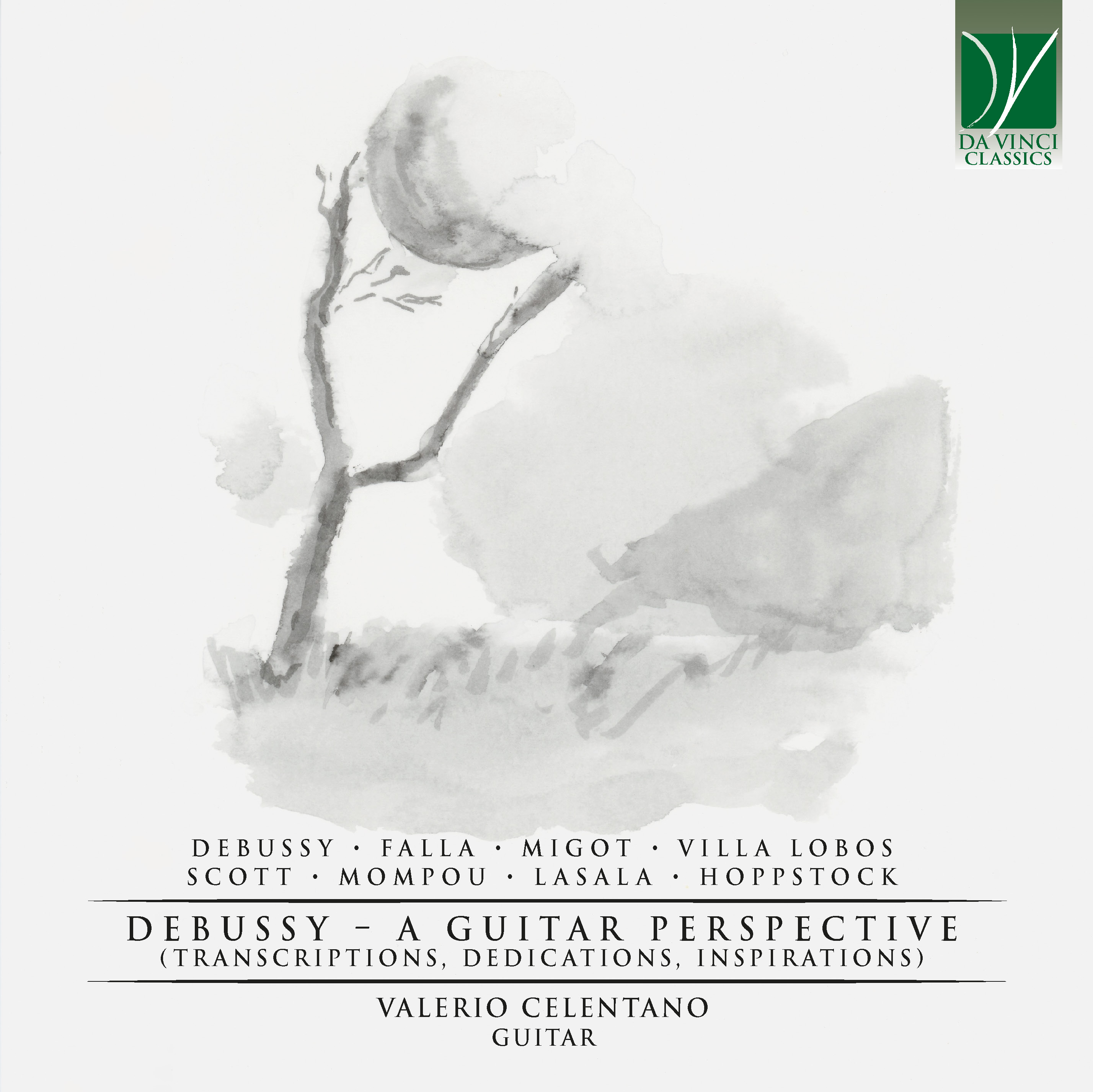 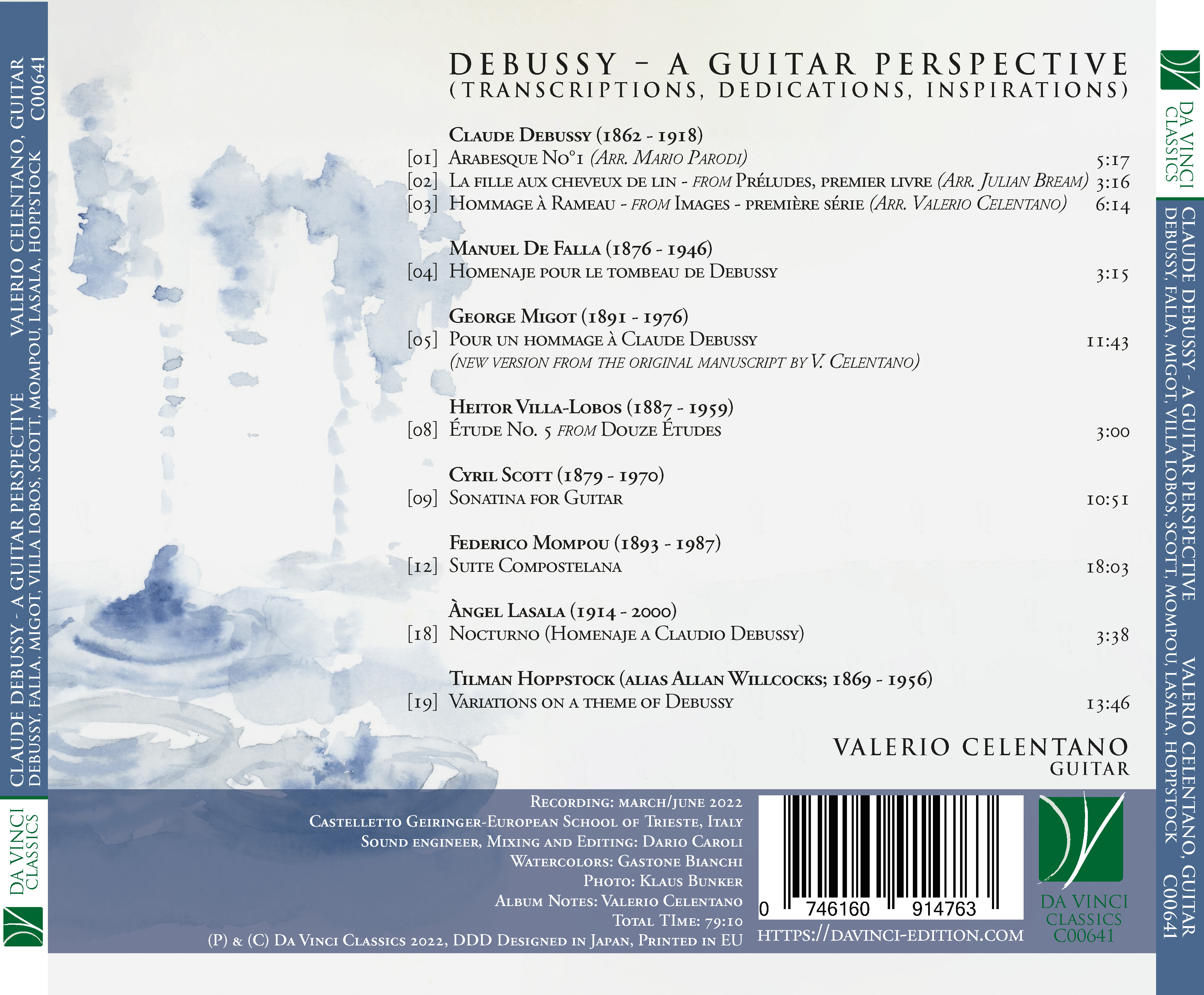 Valerio Celentano: Graduated in classical guitar with maximum vote cum laude at Conservatory of Music “G. Martucci” in Salerno under the guidance of Antonio Grande, he has participated in several Master classes with famous guitarists as Alirio Diaz, Pavel Steidl, David Russel, Jyrki Myllarinen, Mario Gangi, Carlo Marchione, Oscar Ghiglia at the Chigiana Academy in Siena and Athens and with Frédéric Zigante at Corelli Music Academy in Castellaneta. He has won many music competitions (1° prize: Mondovì, 2° prize: Premio delle Arti, Gargnano; “A. Diaz Rome”; 3° prize: “E. Pujol” Sassari, Sanremo I.G.C.) He has a bachelor degree in Modern Literature from the Salerno University with a thesis in Musical Aesthetics entitled "The 17th Century in Naples Through the Spanish Guitar Trend". He obtained a Master’s degree in Ancient Music at the Conservatory of Naples under the guide of Franco Pavan and Toni Florio and continued his baroque guitar and theorbo studies with Massimo Lonardi. Celentano has collaborated with many baroque music ensembles (ScarlattiLab, Effimere Corde) and famous artist such as Renata Fusco, Massimo Lonardi and Pino de Vittorio. Among the chamber music field he expands the guitar repertoire by adapting various works that range from erudite folk songs through Lieder (ICASduo) to instrumental music (Chi Asso duo- a guitar and double-bass project). In 2018 he was invited by Luigi Picardi at the Radio Vaticana show L’Arpeggio for the release of his first CD with Chi Asso duo: “Sul Sur- a South American Anthology” (dotGuitar.it).
He is devoted to teaching and holds an annual specialization course for guitarists in Baronissi and is a classical guitar professor at the 1st degree secondary schools in Trieste.

Cyril Scott: (b Oxton, Cheshire, 27 Sept 1879; d Eastbourne, 31 Dec 1970). English composer, writer and pianist. He showed early musical talent and at the age of 12 was sent to the Hoch Conservatory, Frankfurt, to study under Lazzaro Uzielli and Humperdinck. He returned to England 18 months later and continued his studies under Steudner-Welsing in Liverpool. A second period of study at Frankfurt began in 1895, this time under Iwan Knorr. Fellow composition students included Grainger, Norman O’Neill, Roger Quilter and Balfour Gardiner, who, together with Scott, were soon to be referred to as the ‘Frankfurt Group’. It was during this period that he formed a close friendship with the poet Stefan George, whose work he later translated.

Scott left Frankfurt in 1898, returning to Liverpool and teaching. In 1900 his Heroic Suite was performed in Manchester and Liverpool by Richter, and his First Symphony in Darmstadt under Willem de Haan. Although well received at the time, both works, together with much of the chamber music he had written during this period, were later withdrawn. Scott’s London début came in 1901 with a performance of the Piano Quartet in E minor. His Second Symphony (later reworked as Three Symphonic Dances) was conducted by Wood at a Promenade Concert in 1903. He signed a contract with Elkin for songs and piano pieces, and in 1909 a similar agreement was made with Schott for large-scale works. Many of the original manuscripts of works published in Germany were destroyed during World War II. The long series of Impressionist piano pieces and songs that followed the Elkin agreement, together with frequent recitals and his own strikingly romantic appearance, established his reputation as a ‘modernist’ composer. His most outstanding achievement in the pre-war period was the Piano Concerto which Beecham introduced at the British Music Festival of 1915.

In 1921 Scott married the novelist Rose Allatini. By this time he had begun to take a serious interest in Indian philosophy, which led to his becoming a Vedantist and finally a follower of the Higher Occultism. He also became absorbed in the study of naturopathy, osteopathy and homeopathy. He was to write successfully and frequently on all these topics, his work being translated into many languages. His literary output included several volumes of poetry (much influenced by Swinburne and Dowson), a large number of unpublished plays, and an entertaining autobiography, My Years of Indiscretion (1924).

Between the wars Scott’s music was much performed on the Continent, and a highpoint in his career came with the production of his one-act opera The Alchemist at Essen in 1925 under Felix Wolfe. In England, large-scale works for chorus and orchestra were heard at the 1936 Norwich Festival (Let us Now Praise Famous Men) and the 1937 Leeds Festival (La belle dame sans merci). But by now his music had begun to lose something of its appeal as a novelty. The rich harmonies, languorous melodic lines and rhapsodic diffuseness of form that had once seemed daring and very un-English, came to be regarded simply as part of a period tendency which had seen its most successful expression in the music variously of Debussy and Skryabin. Though still in demand as an interpreter of his own music (he made recital tours all over the world), his reputation as a significant composer went into partial decline.

By 1944 Scott had decided to abandon composition, but according to his own account (1969), a ‘significant occult sign’ led him to continue. The fruits of this renewed activity included the opera Maureen O’Mara (1946), an oratorio Hymn of Unity (1947), and a considerable quantity of orchestral and chamber music.

In 1962 a group of friends and admirers formed the Cyril Scott Society with the object of arousing interest in his work, but their efforts did not lead to any large-scale revival. A performance of a piano concerto in 1969, however, revealed a work that for all its rhapsodic opulence was stronger than had been suspected, and the Hourglass Suite made a similarly favourable impression in 1971. These performances and a 1993 recording of five major orchestral works suggest that a thorough-going examination of his life’s work is long overdue. In the meantime his reputation is kept alive in England by a handful of songs and piano pieces, though abroad his chamber music still commands respect. The importance of his achievement was acknowledged, during his lifetime, by the International Academy (MusD, FIA 1956), the American Conservatory in Chicago (DMus 1959) and the RAM (1969).

Georges Migot
(b Paris, 27 Feb 1891; d Levallois, nr Paris, 5 Jan 1976). French composer. His father was a pastor and doctor, and Migot’s concern for spiritual and humane values was instilled from his earliest years. In 1909 he entered the Paris Conservatoire, studying composition with Widor, orchestration with d’Indy and music history with Emmanuel. Badly wounded at the outset of World War I, he resumed his studies after a long convalescence; he won three successive composition prizes (1918–20). In 1921 he won the Blumenthal Foundation Prize for French thought and art for a body of work that was already considerable and showed great originality. At the same time he was producing remarkable paintings (exhibitions of his work were held at the Georges Petit Gallery in 1917 and at the Marcel Bernheim Gallery in 1919); he also published a collection entitled Essais pour une esthétique générale (1920). The years 1920–39 were ones of constant struggle – in music, writings and discussion – against the neo-classical aesthetic which was dominating music in Paris. Always an independent, Migot took nothing from this or any other fashionable movement; instead he continued to pursue his own ideas, steadily adding to his monumental oeuvre. From 1949 to 1961 he was keeper of the Museum of Instruments at the Conservatoire. He was an Officer of the Légion d’Honneur.

His earliest works show a movement from harmonic writing to the linear style of such pieces as the Trio (1918–19) for violin, viola and piano. What distinguishes him from his contemporaries – Hindemith or Les Six, for example – is the uncompromisingly polyphonic manner which he progressively evolved. In his mature works, such as Requiem a cappella (1953), he achieved a line which is completely free from rigid metrical restriction and avoids any suggestion of definite tonality or modality. This melodic style is one of the most characteristic features of Migot’s music. His use of timbre is also highly individual, whether in the unusual combinations of his chamber music (e.g. the Quatuor for flute, violin, clarinet and harp and the Deux stèles for solo voice, harp, celesta, tam-tam, cymbal and double bass), the subtlety of his orchestral scoring (most notable in the three concertante suites, 1924–6) or the adventurous sonorities of his piano works (e.g. Le zodiaque).

The flowing quality of Migot’s music sets it in the tradition of Couperin, Rameau and Debussy. However, the visionary imagination displayed in such works as Le sermon sur la montagne, La passion and Saint Germain d’Auxerre is essentially original. Migot is set apart from other French composers of his generation by his impressive output of vocal works, which includes a large number of mélodies and over 70 choral works. The latter include six oratorios on the life of Christ, as well as other religious works (Le petit évangéliaire, De Christo etc.), some of which use his own texts based on the Gospels. His independent poetry, of which he published two volumes (1950–51), is concerned principally with spiritual themes. He insisted on a close spiritual link between text and music, scorning simplistic word-painting, but even in his secular and instrumental works the loftiness of thought is unmistakable.

Heitor Villa-Lobos (b Rio de Janeiro, 5 March 1887; d Rio de Janeiro, 17 Nov 1959). Brazilian composer. Heitor Villa-Lobos stands as the single most significant creative figure in 20th-century Brazilian art music. This significance stems not only from his international recognition, but from his achievement in creating unique compositional styles in which contemporary European techniques and reinterpreted elements of national music are combined. His highly successful career stood as a model for subsequent generations of Brazilian composers.