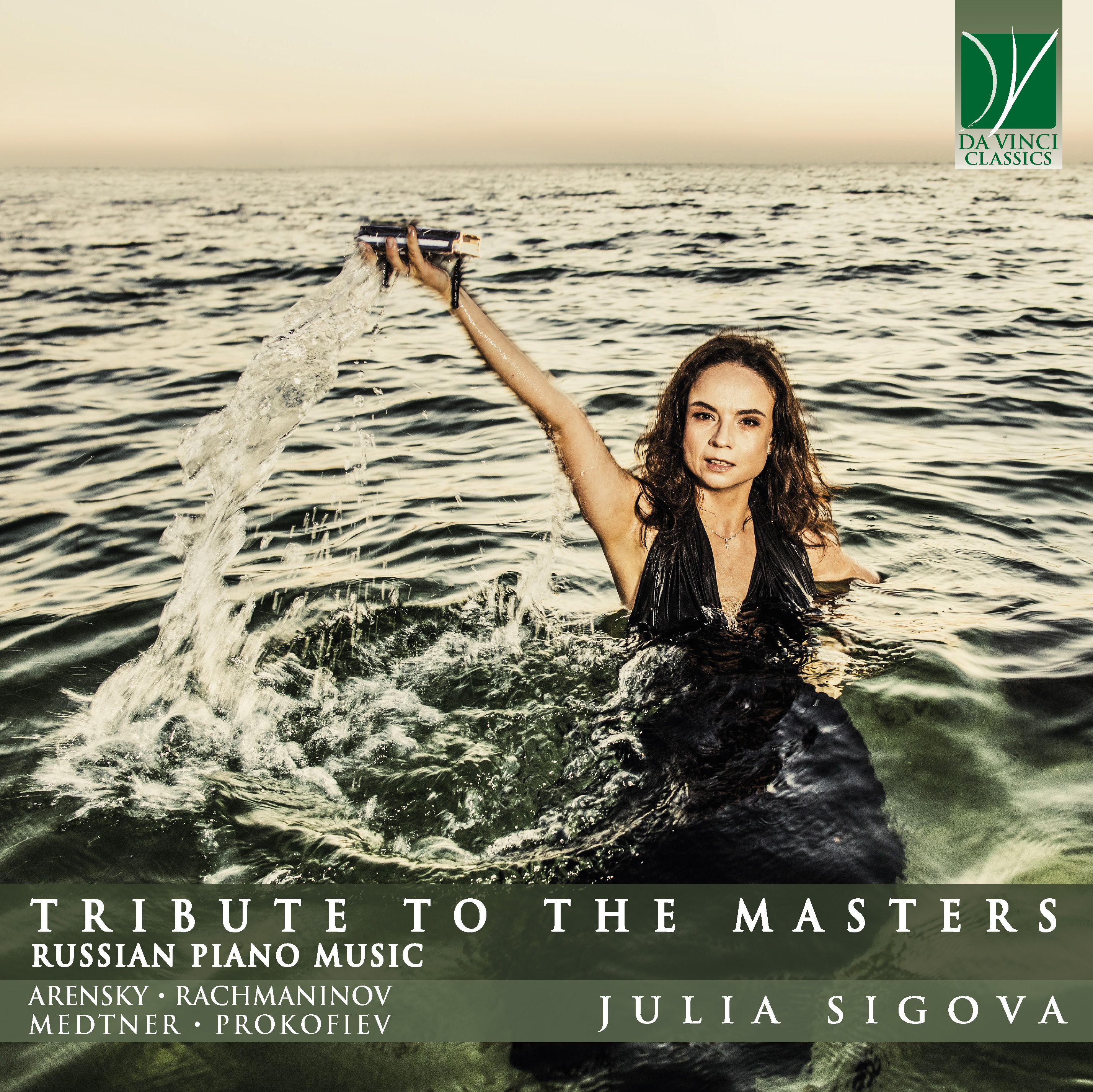 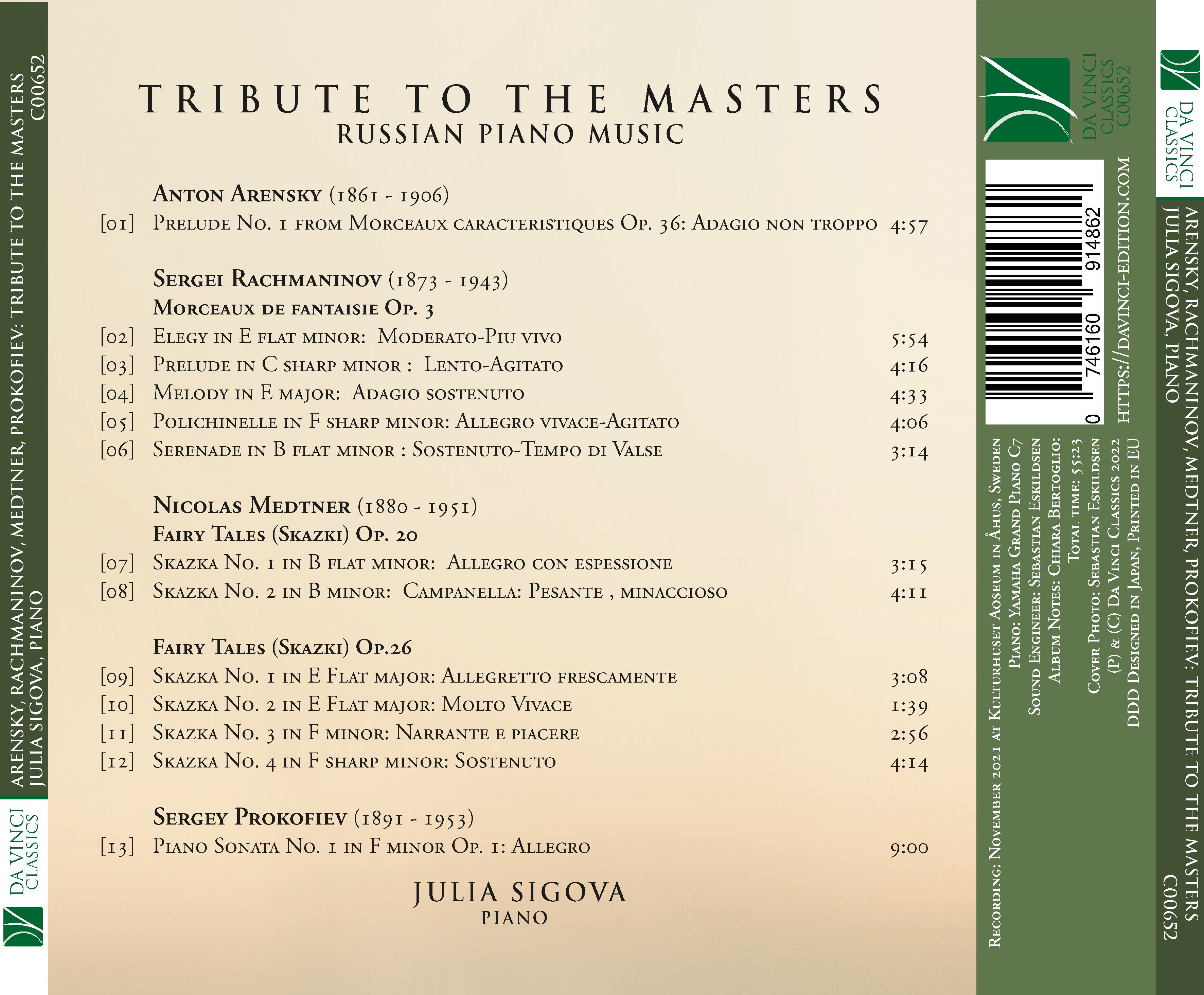 This is my second CD dedicated to Russian piano music of the late 19th and early 20th centuries. In this album I present early works by young S. Rachmaninov and S. Prokofiev. Rachmaninov’s “Morceaux de Fantaisie” Op.3 reminds me of my cheerful student life in Minsk. Written by my favourite composer, S. Prokofiev’s Sonata Op.1 No.1 was my first and most liked from all the Prokofiev sonatas I have ever played. I also dedicated a special place on my album for N. Medtner and his “Fairy Tales” Op.20 and 26.
The album starts with the Prelude Op.36 by A. Arensky. Rachmaninov was a student of Arensky and he dedicated several piano works to his dear mentor. I therefore think that it would be fitting to dedicate this album to all my wonderful teachers over the years.
Julia Sigova @ 2022

Praised by International Piano (August 2019) for "an imaginative programme, brilliantly performed..."  pianist Julia Sigova has received wide international acclaim for her powerful performances, her poetic interpretations and her innovative programming across a wide repertoire, often including lesser-known works from the Russian and Romantic repertoire.

Since Ms.Sigova’s debut with The Malmö Symphony Orchestra in 2010, she has become one of the leading female concert pianists in Scandinavia. She has been invited to perform at many prestigious festivals and venues worldwide including La Biennale in Venice, Societa dei Concerti in Milano, Satie Festival in Paris, Britt Music Festival in Medford, Båstad Chamber Music Festival , Music in Tagaborg and Malmö Live in Sweden as well as St.Martin in the Fields in London.  Some of the many musicians and conductors with whom Ms.Sigova has performed include: Håkan Hardenberger; Susanne Resmark; Mats Rondin; and Marc Soustrot.

Her many awards and scholarships include not only the prize of Best Pianist in the Öresund region in 2008, but Julia Sigova was also designated Best Female Classical Artist in Sweden by the Fredrika Bremmer Foundation in 2011.

Julia's recordings are often broadcast on radio around the world. She also performed on Swedish TV in the very popular program "Kulturfrågan kontrapunkt".

Born in Minsk, Belarus, Julia showed an early musical talent, beginning to play piano at the age of 6. After finishing Glinka Music High School in Minsk, Julia was invited to study at the Malmö Academy of Music in Sweden, completing her Soloist Diploma with prof. Hans Pålsson, and subsequently studying at the Sibelius Academy in Helsinki.   She continues her education as a soloist under the guidance of prof. Norma Fisher in London and prof. Konstantin Bogino in Italy where she was his assistant.

In addition to her performance career, Ms. Sigova is deeply committed to music education, and is the founder of the International Piano School “Sigova PianoForte” in Malmö, Sweden. She regularly appears as a member of the jury at international competitions and gives master-classes across the world. Ms. Sigova has extensive experience and owns a diverse chamber music repertoire. She is organizer of the chamber music concert series "Salon de Musique" in Malmö. Finally, Julia is also founder and artistic director of Malmö Yamaha Piano Competition, which began in 2021.

Anton [Antony] Stepanovich Arensky
(b Novgorod, 30 June/12 July 1861; d nr Terioki, Finland [now Zelenogorsk, Russia], 12/25 Feb 1906). Russian composer, pianist and conductor. His father, a doctor, was a keen cellist, and his mother an excellent pianist who gave him his first music lessons. By the age of nine he had already composed some songs and piano pieces. When the family moved to St Petersburg, Arensky took lessons with Zikke before entering the St Petersburg Conservatory (1879), where he studied composition with Rimsky-Korsakov and counterpoint and fugue with Johannsen. He graduated with a gold medal in 1882. Even before this Rimsky-Korsakov had been sufficiently impressed by Arensky’s talent to entrust him with a share in preparing the vocal score of The Snow Maiden. After graduating Arensky went straight to the Moscow Conservatory as a professor of harmony and counterpoint; among his pupils were to be Rachmaninoff, Skryabin and Glière. The move to Moscow brought him into close contact with Tchaikovsky, who gave him much practical encouragement, and Taneyev. From 1888 to 1895 he directed the concerts of the Russian Choral Society and also appeared as a conductor at symphony concerts. In 1889 he was appointed to the council of the Synodal School of Church Music in Moscow, remaining until 1893. One of Arensky’s greatest personal successes was with his opera Son na Volge (A Dream on the Volga), based on the same Ostrovsky play as Tchaikovsky’s opera Voyevoda, and produced in Moscow in 1891. Parts of the opera had been composed under Rimsky-Korsakov’s supervision when Arensky was still a conservatory student.

Nicolas [Metner, Nikolay Karlovich] Medtner
(b Moscow, 24 Dec 1879/5 Jan 1880; d London, 13 Nov 1951). Russian composer and pianist. His ancestors came from northern Europe (his father was of Danish descent and his mother of Swedish and German extraction), but by the time of his birth the family had been established in Russia for two generations and had thoroughly assimilated a Russian identity without abandoning their German cultural inheritance.

Medtner played the piano from the age of six, receiving lessons first from his mother and later from his uncle, Fyodor Goedicke. Enrolling in 1892 at the Moscow Conservatory, he studied successively with A.I. Galli, Pabst, V.L. Sapel'nikov and Safonov, and graduated in 1900 with the institution's gold medal as the outstanding pianist of his year. As a composer he was largely self-taught. Though he wrote music throughout his student years and in his junior course had studied theory with Kashkin and harmony with Arensky, he did not follow the customary advanced conservatory regime for prospective composers, even abandoning, with his connivance, Taneyev's counterpoint class, while continuing to take him his work informally.

After heading the list of honourable mentions in the pianists' section of the Rubinstein Competition in August 1900, Medtner prepared for the launch of a career as a concert artist, but encouraged by Taneyev and his mentor in life, his eldest brother, Emil, he had a change of heart and decided that his true vocation after all was composition. Henceforth, devoting himself to his art with an almost religious zeal, he made no effort to build a career as a performer but treated his occasional concert appearances essentially as showcases for his own music, of which the bulk is for solo piano and none without a part for the instrument.

Sergey Prokofiev (b Sontsovka, Bakhmutsk region, Yekaterinoslav district, Ukraine, 11/23 April 1891; d Moscow, 5 March 1953). Russian composer and pianist. He began his career as a composer while still a student, and so had a deep investment in Russian Romantic traditions – even if he was pushing those traditions to a point of exacerbation and caricature – before he began to encounter, and contribute to, various kinds of modernism in the second decade of the new century. Like many artists, he left his country directly after the October Revolution; he was the only composer to return, nearly 20 years later. His inner traditionalism, coupled with the neo-classicism he had helped invent, now made it possible for him to play a leading role in Soviet culture, to whose demands for political engagement, utility and simplicity he responded with prodigious creative energy. In his last years, however, official encouragement turned into persecution, and his musical voice understandably faltered.