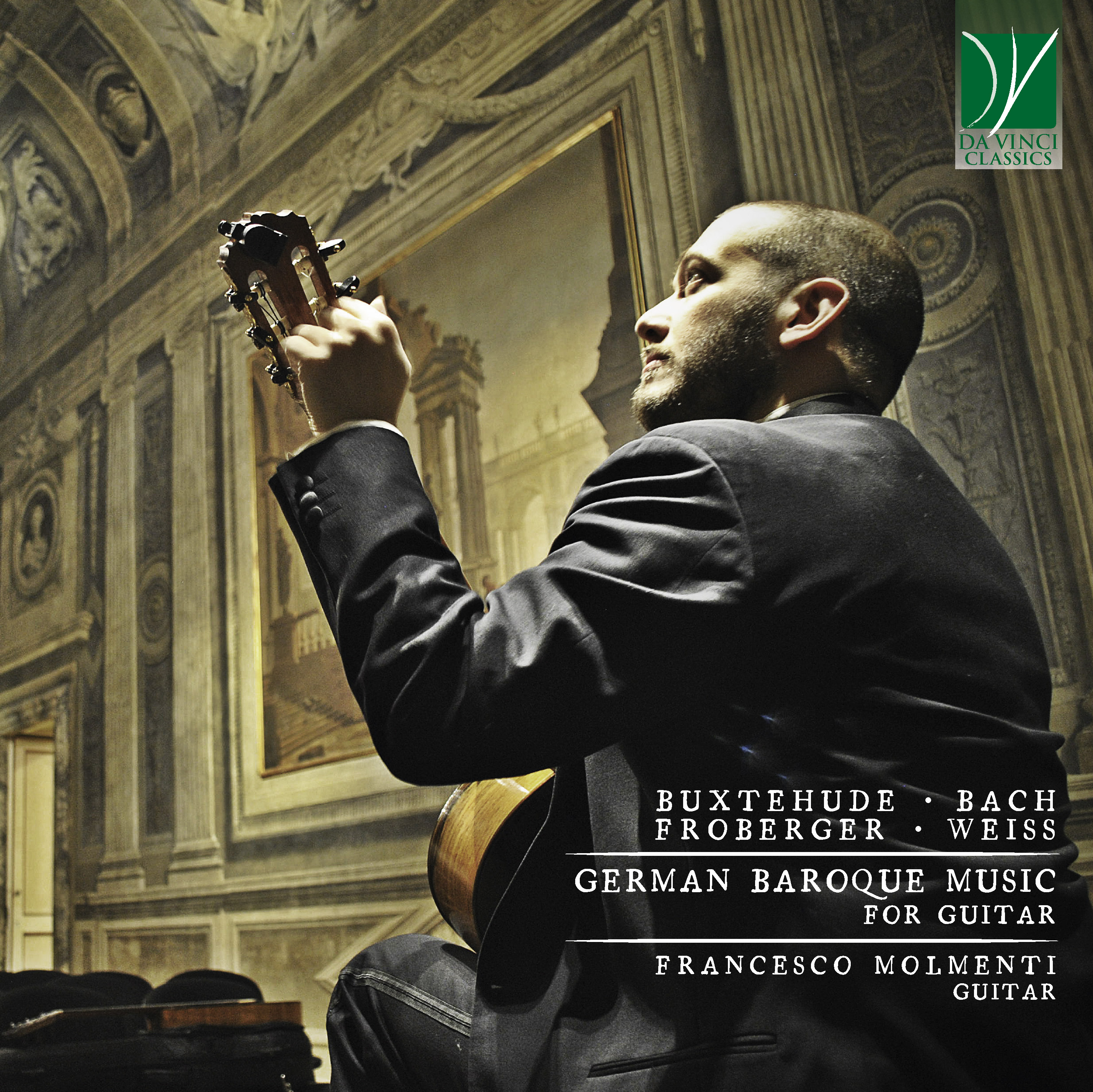 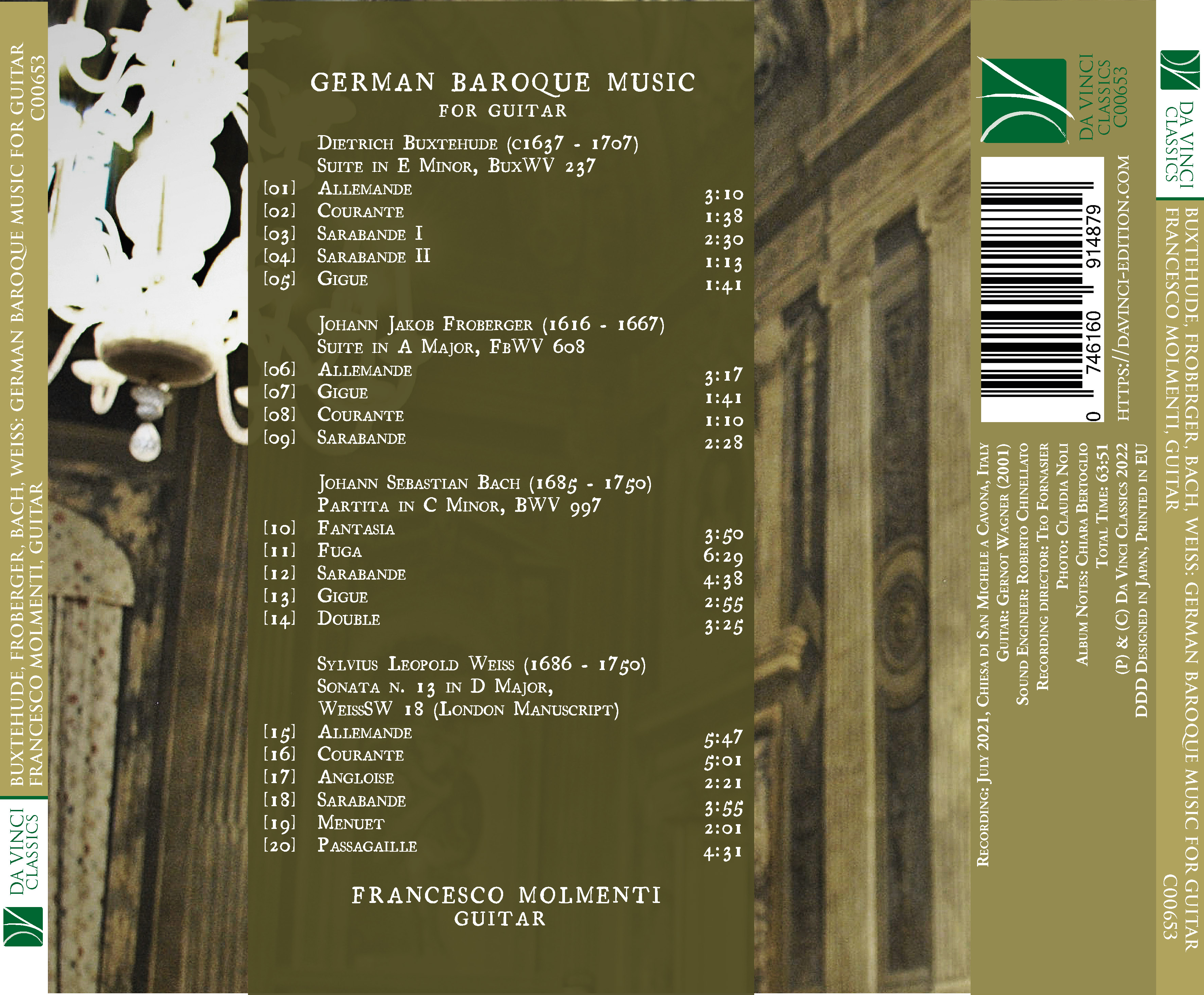 He currently performs as a soloist, with the In tempore Belli guitar trio and with Luigi Accardo in the Extravagantia – guitar & harpsichord duo, with whom he recorded a CD dedicated to the J.S. Bach’s six Trio Sonatas BWV 525-530 (Dynamics 2019). He’s the Ensemble ‘Un pizzico di corda’ leader.

Dieterich Buxtehude
(b ?Helsingborg, c1637; d Lübeck, 9 May 1707). German or Danish composer and organist. He is best known as a composer of organ music, of which he was one of the most important composers before J.S. Bach. He also left equally impressive repertories of sacred vocal and instrumental ensemble music.

Johann Jacob Froberger
(b Stuttgart, bap. 19 May 1616; d Héricourt, nr Montbéliard, France, 6/7 May 1667). German composer, organist and keyboard player. Considered the foremost mid-17th century German composer of keyboard music, he was court organist in Vienna, studied with Frescobaldi in Rome, and travelled and performed in the Low Countries, England, France, Germany and Italy. He crafted a distinctive personal idiom from stylistic features of Italian, French and German keyboard music. His works strongly influenced Louis Couperin and German keyboard composers into the time of J.S. Bach.

Silvius [Sylvius] Leopold Weiss
(b Breslau [now Wrocław], ?12 Oct 1686; d Dresden, 16 Oct 1750). A son of (1) Johann Jacob Weiss, he was trained by his father and in his seventh year he performed for Emperor Leopold I. By 1706 he was in the service of Count Carl Philipp of the Palatinate, who was then resident in Breslau. His earliest datable sonata, no.7 (1706), was written while he was on a visit to the court of the count’s brother in Düsseldorf. He spent 1710–14 in Italy with the Polish Prince Alexander Sobiesky. The prince lived in Rome with his mother Queen Maria Casimira, who engaged first Alessandro and later (1709) Domenico Scarlatti as her music director. Thus Weiss doubtless worked with the Scarlattis, and probably was exposed to the music of Corelli and other composers in Rome. After the prince’s death in late 1714 Weiss returned to the North. He reentered the service of Carl Philipp, now Imperial Governor of the Tyrol, perhaps as early as 1715. By 1717 he was listed as a member of the chapel at the Saxon court in Dresden. He was formally appointed to the chapel in August 1718 with a high salary, and by 1744, he was the highest-paid instrumentalist at the court. Weiss’s activity as a performer nearly came to a premature end when in 1722 he was attacked by a French violinist named Petit who attempted to bite off the top joint of his right thumb. Handwritten notes by Weiss found in continuo parts to operas by J.A. Hasse which were performed at court between 1731 and 1749, suggest that Weiss was regularly involved in ensemble performance (see Burris); this activity may have been as important as his duties as a solo performer.