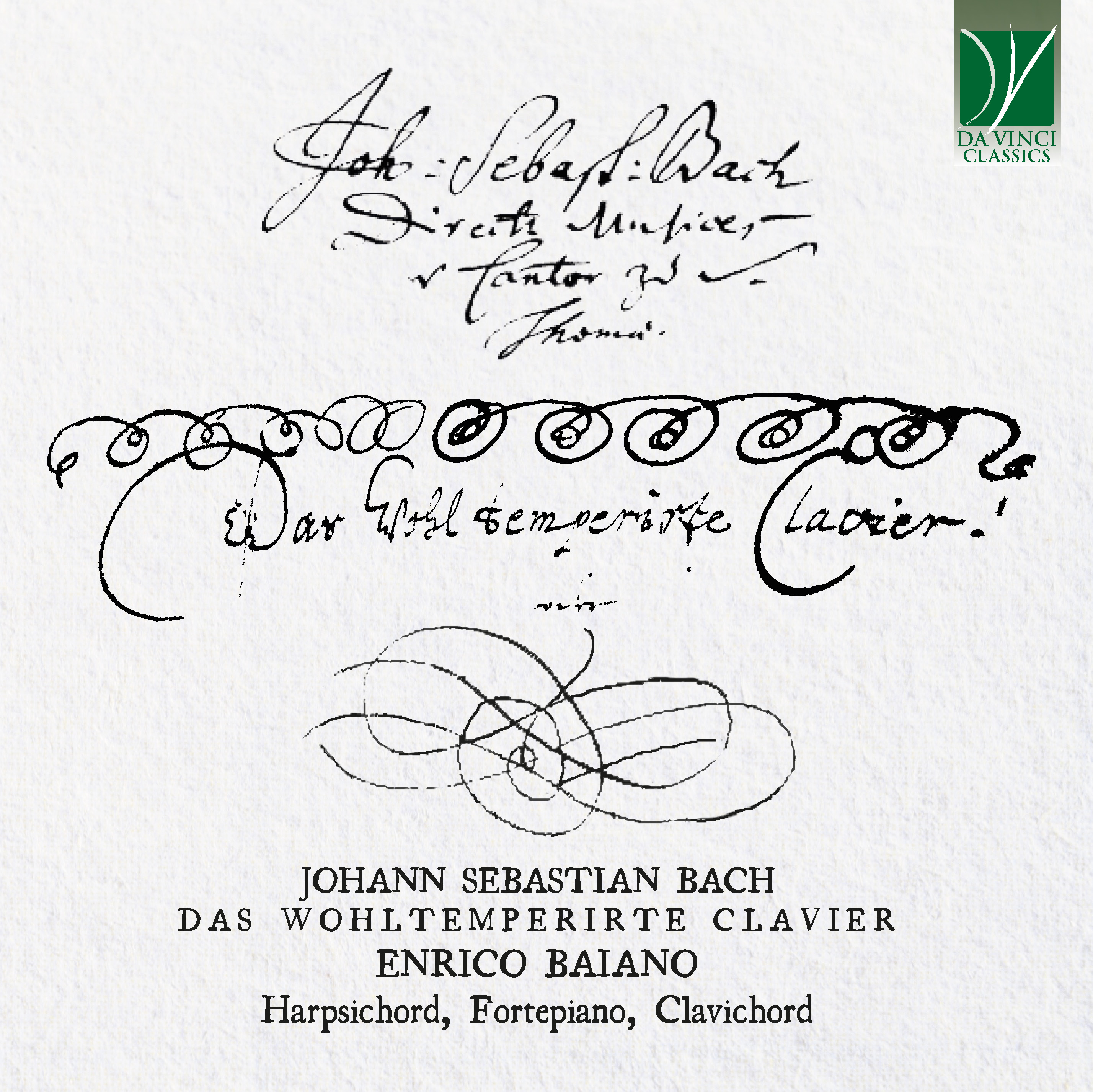 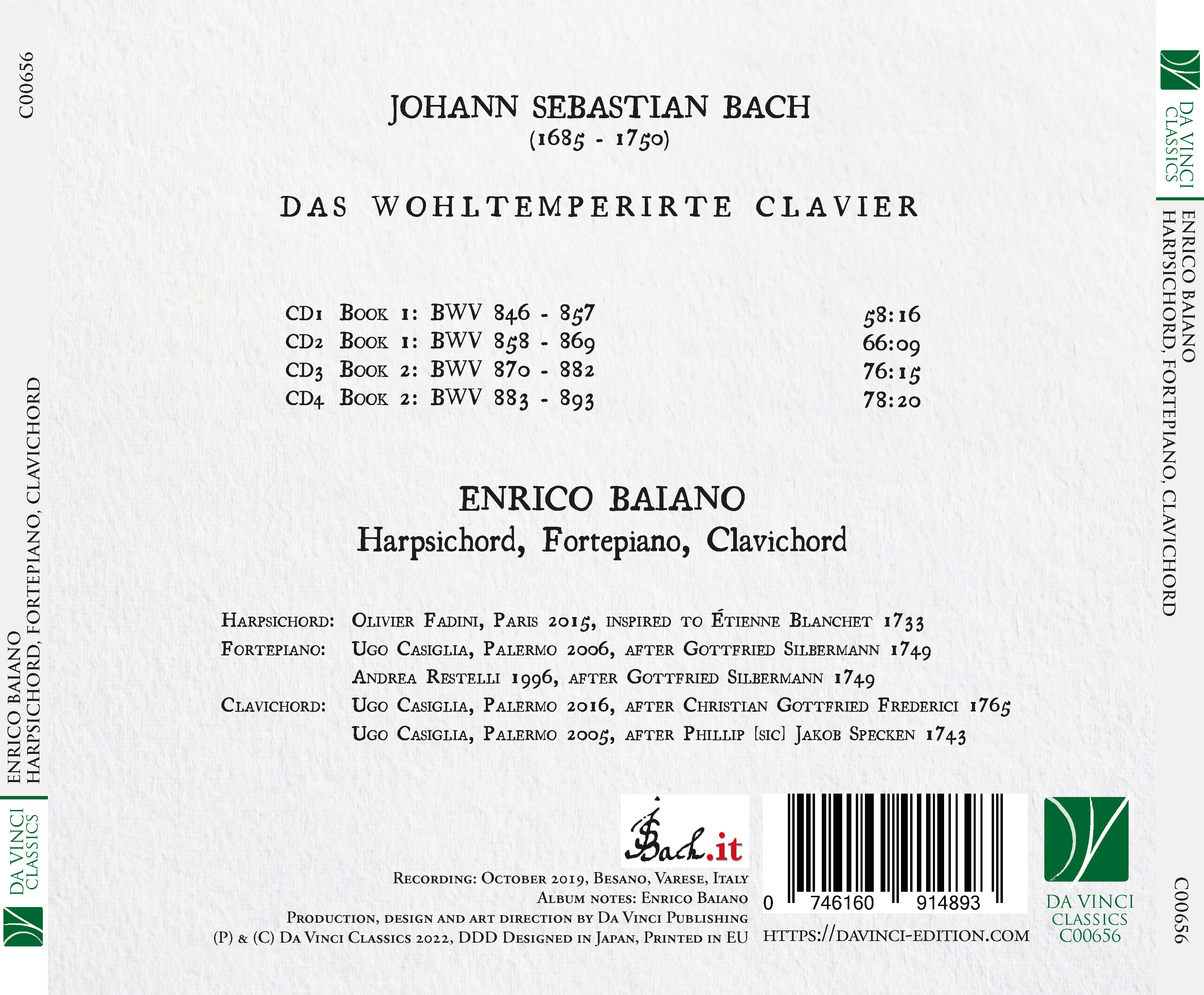 For more detailed notes in Italian, French and English, please visit the link below:

Bach is to the history of Western music as Dante and Shakespeare are to western literature. Outstanding musical figure, with endless creative and communicative powers, he expresses and summarizes all the musical experiences of the late Renaissance and the Baroque, taking them to unequalled heights. He had an unfailing taste in synthesizing the most diverse styles and in restoring the strength of seemingly outdated forms, and an impressive capacity of structuring the musical discourse. Bach works out a new way of thinking in music, that becomes a foundational element of the European musical thought in the two successive centuries.
Das Wohltemperirte Clavier (the original spelling) represents the final and most important stage of Bach’s teaching programme, which accompanies the “youth eager to learn” from elementary to proficiency level. This programme begins with the Little Preludes, the two-part Inventions and some other Preludes which will be later integrated into Book One of WTC. Next come the three-part Sinfonias and the Suites; finally, the monumental Well-Tempered Clavier gives complete instruction on keyboard technique and interpretation, thorough-bass, composition and improvisation, counterpoint, musical form, aesthetic and rhetoric.
Since Bach was extremely exigent with hand position, touch and quality of sound, all his private pupils had to go through preparatory training lasting from a few months to one year, during which they had to practice short one-hand exercises provided by Bach. We don’t have Bach’s original exercises, but can get an idea of them by looking at the évolutions written by François Couperin for his L’Art de Toucher le Clavecin, which give various formulas to be carried along one or two octaves and in different keys. Far from being aridly technical, these little exercises develop a basic musical figure in a pleasant and artistic way. This is actually the generating principle of the Inventione, ‘musical finding’: a simple motive is used to build a whole piece. It will lead to the artistic étude, which will give glorious fruits from Clementi to Ligeti.
Bach lived in a period of important changes in musical taste, and one of his aims was to provide a large and possibly exhaustive catalogue of musical forms. He achieved that by updating older forms as well as experimenting with the new formal tendencies. He also sought to demonstrate that contrapuntal style was perfectly capable for the expression of sentiments. Thus nearly all music forms and all compositional techniques are represented in the WTC, as we can see in the following list (I, II = book 1 or 2, p = prelude, f = fugue):
Arpeggiated lute-style prelude (I, p1, p6; II, p3); organ Fantasia (I, p7; II, p1, p11, p16); organ verset (I, f1; II, f2, f5); ostinato (étude ante litteram, I, p2, p3, p5, p6, p10/2nd part, p11, p15); bravura-toccata (I, p3, p21; II, p23); mono- or poly-thematic Ricercare (I, f4, f8, f22; II, f9, f23); two-part Invention (I, p3, p13, p14, p20; II, p2, p8, p10, p20, p24); three-part Sinfonia (I, p18, p19, p23); Sonata a tre (I, p24); Trio (II, p4, p22); Aria, Arioso (I, p8, p16; II, p12, p14); orchestral Sinfonia (II, p5, p17); Italian concerto (I, f2; p17; II, f1, p6, f12, p15); French Ouverture (I, f5; II, p13, f20); Siciliana (I, p4); Pastorale (I, p9; II, p7, p19); French Allemande (I, p12); Italian Allemanda (II, p2); Italian Corrente (II, f15); Bourrée (I, f3); Gavotte (II, f13); Passepied (I, f11; II, f24); Gigue (I, f15, f19; II, f4, f10, f11); Canzona (II, f7); Sonata (I, p9, II, p2, p5, p7, p8, p9, p12, p13, p14, p15, p18, p19, p21).

The term Sonata of course should not be associated with the Sonata principle of the Classic period. It refers to the early 18th century evolution of the bi-sectional dance movement; its specific feature is the tonally oriented structure developing two or more ideas.
Of course this list is to be taken just as a handy starting point: none of the 96 pieces of the WTC can be restrained into a ready-made schema. The musician who thoroughly studies them will deal with innumerable issues related to interpretation, expression and aesthetics.
The Well-Tempered was not composed to advocate equal temperament, which was well known but not generally appreciated because of the lack of contrasts between keys. Bach favoured the practical example to a complicated treatise, and left us a simple pattern: a flourish drawn on top of the frontispiece page of Book One. It shows a sequence of eleven ‘loops’, which can readily correspond to eleven fifths (the twelfth would ideally connect the two ends). Some loops are simple, others have one or two supplementary knots.
In my opinion Brad Lehman provides a fairly convincing analysis of this scheme (see ‘Bach’s Temperament: Our Rosetta’s Stone – 1’, “Early Music” Vol. 33, No. 1, February 2005, pp. 3-23. – 2, “Early Music” Vol. 33, No. 2, May 2005, pp. 211-231). He assumes that the simple loops refer to pure fifths, and those with one or two supplementary knots refer to narrower fifths (1 knot = slightly narrow; 2 knots = a bit narrower). The result is a typical German unequal temperament of the period, that allows the use of all the keys, but maintains them differentiated. This temperament avoids the traps usually occurring in the temperaments of the period: the E-B fifth is pure and softens the E major triad, usually problematic because of the fairly ‘acid’ E-G# third; at the same time the G#, enharmonically intended as Ab, creates a good major third with the C; the major thirds C#-E# and F#-A# are “nervous” but not unpleasable. Another benefit of this temperament is that it helps to overcome some tuning problems that strings and wind instruments could face when they play with a keyboard instrument, which is exactly what is required by a well-tempered instrument. I used it for Book One, and another one, slightly different but based on the same principles, for Book Two. How good is the result can be judged carefully listening (in Book One) to the closing chords of the Prelude I, of the Prelude and Fugue IV, of the Fugue XIII and of the Fugues XVII and XVIII.

The instruments. Part of this recording was made on a fortepiano, built in 2005 by Ugo Casiglia (Palermo) and based on a Gottfried Silbermann’s 1749 original instrument. The friendship between Bach and Silbermann is well known. Bach didn’t liked the earlier piano-fortes built by Silbermann, but several years later he gave the latest models his full approbation; he played on such instruments during his famous visit at Frederic the Great’s court in Poznan. In the inventory compiled at his death one entry describes a fournirte Clavecin which just seems to correspond to a Silbermann fortepiano.
The clavichord was traditionally the preferred instrument in Germany for studying and making Hausmusik. I used a copy after the Christian Gottfried Friederici clavichord built in 1765 for Book One, and a copy after an original of the Swedish maker Phillip [sic] Jakob Specken for Book Two, both made by Ugo Casiglia in 2005 and 2015.
Lastly, the harpsichord: made by Olivier Fadini in Paris, it is inspired by a 1733 original by Étienne Blanchet; its French-Flemish timbre is well-suited to the “pan-European” spirit of Bach’s music.

Post-scriptum about the text. Fugue I, bar 15, bass: I adopt the ‘correction’ inserted by Bach in a later draft, maybe to avoid the unprepared seventh and the following hidden fifths between soprano and bass. The main sources of the Wohltemperirtes Clavier are strewn with small variations, proof of the constant work of filing and perfecting the author imposed on his compositions. I deemed interesting to let this variant be heard: usually it is avoided because it changes the rhythm of the subject. In Fugue VIII, bar 16, I accept the suggestion of many scholars, and change the first note of the soprano from b to c#. The analysis of the autograph of this Fugue and of the minor G sharp Fugue suggests an origin respectively in D minor and G minor; later the Fugues would be transposed half a tone up, through the simple change of key signature. In the supposed D minor version of Fugue VIII, the scale of bar 15 would go up to the high c, which in D sharp minor would be high c#; since most of the instruments of the time didn’t have this tone, it would have been avoided, holding the B as a retardation. On an instrument of greater range it is possible to give the passage a more regular arrangement. Similar considerations inspired other small melodic changes: in Fugue XIX, bar 30, last triplet, the first and the third note of the Soprano are moved an octave upward, restoring the symmetry with the previous bar of the bass, as well as the corresponding bars 49 and 50. In Fugue XXIV, bar 63, the second note of the soprano was changed from G# to C#, so as not to alter the characteristic melodic passage. I didn’t change the similar passage in bar 36, because its chromaticism is beautiful and intensely expressive, and beauty is better than symmetry…

Enrico Baiano
Harpsichordist, clavichordist and fortepianist, is today considered one of the most complete and interesting interpreters on the ancient music scene. In his interpretative approach, historical-stylistic rigor, expressive freedom and great virtuosity are wisely combined. He is one of the major scholars and interpreters of the music of the masters of the Neapolitan seventeenth century (Ascanio Mayone, Giovanni Maria Trabaci, Giovanni Salvatore, Gregorio Strozzi etc.), Girolamo Frescobaldi, Johann Jakob Froberger, Alessandro and Domenico Scarlatti, Johann Sebastian Bach. Other authors to whom he dedicates in-depth study are the Elizabethan virginalists, Henry Purcell, Louis Couperin, , Jean-Philippe Rameau, Carl Philip Emanuel Bach, Franz Joseph Haydn, Wolfgang Amadeus Mozart, Muzio Clementi, Ludwig van Beethoven.
He has recorded various CDs for the 'Symphonìa' label (now being re-released for the Pan Classic and Glossa labels) and Stradivarius, all of which have been enthusiastically received by critics and have won several awards.
He has taken part in various Italian and foreign television and radio broadcasts and in two documentary films by director Francesco Leprino: "Sul nome B.A.C.H." and “A daring game” (on Domenico Scarlatti).

He is a member of the International Advisory Panel of the Historical Keyboard Society of North America.
He is a professor of harpsichord, clavichord and fortepiano at the ‘Santa Cecilia' Conservatory in Rome.