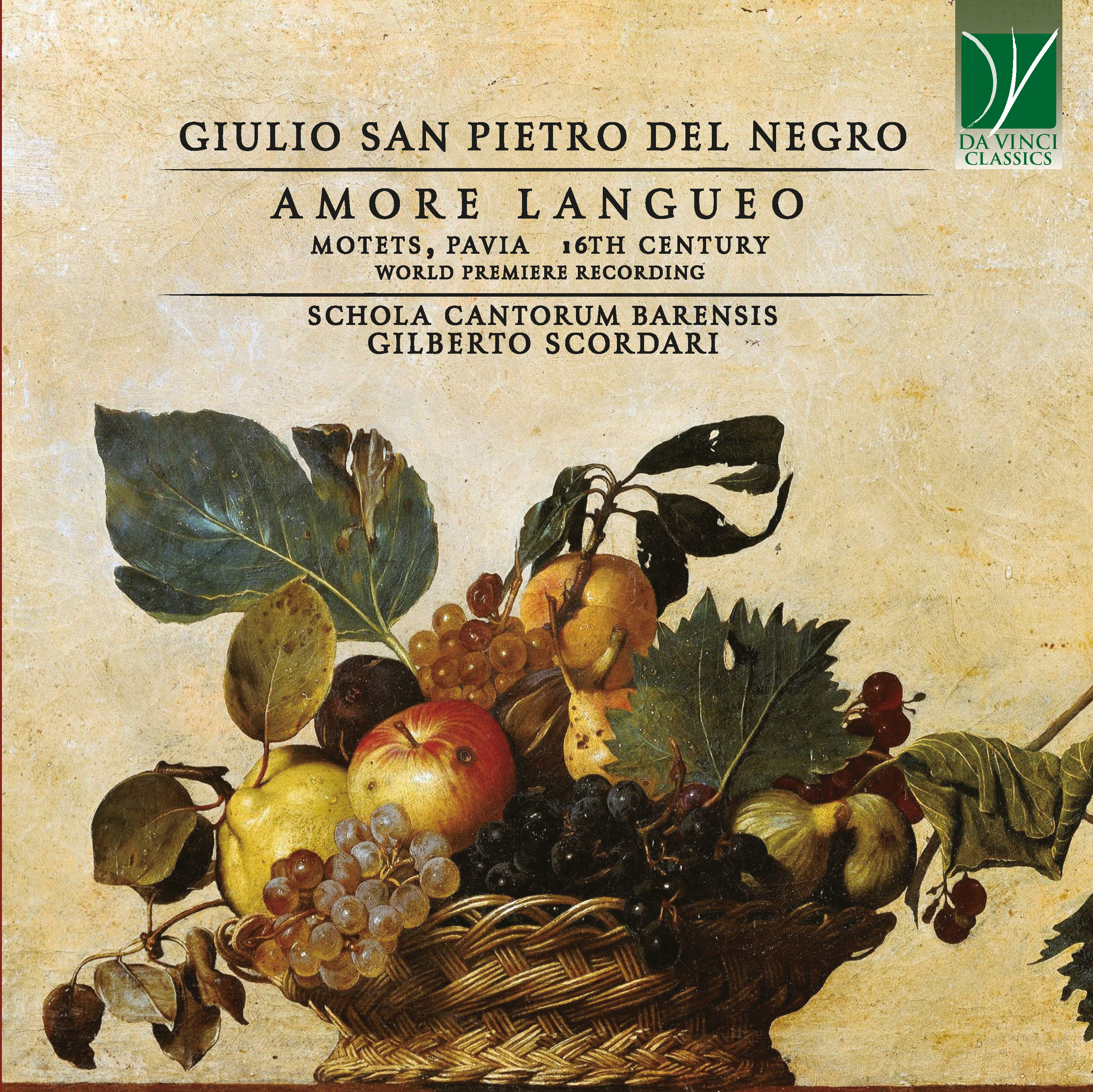 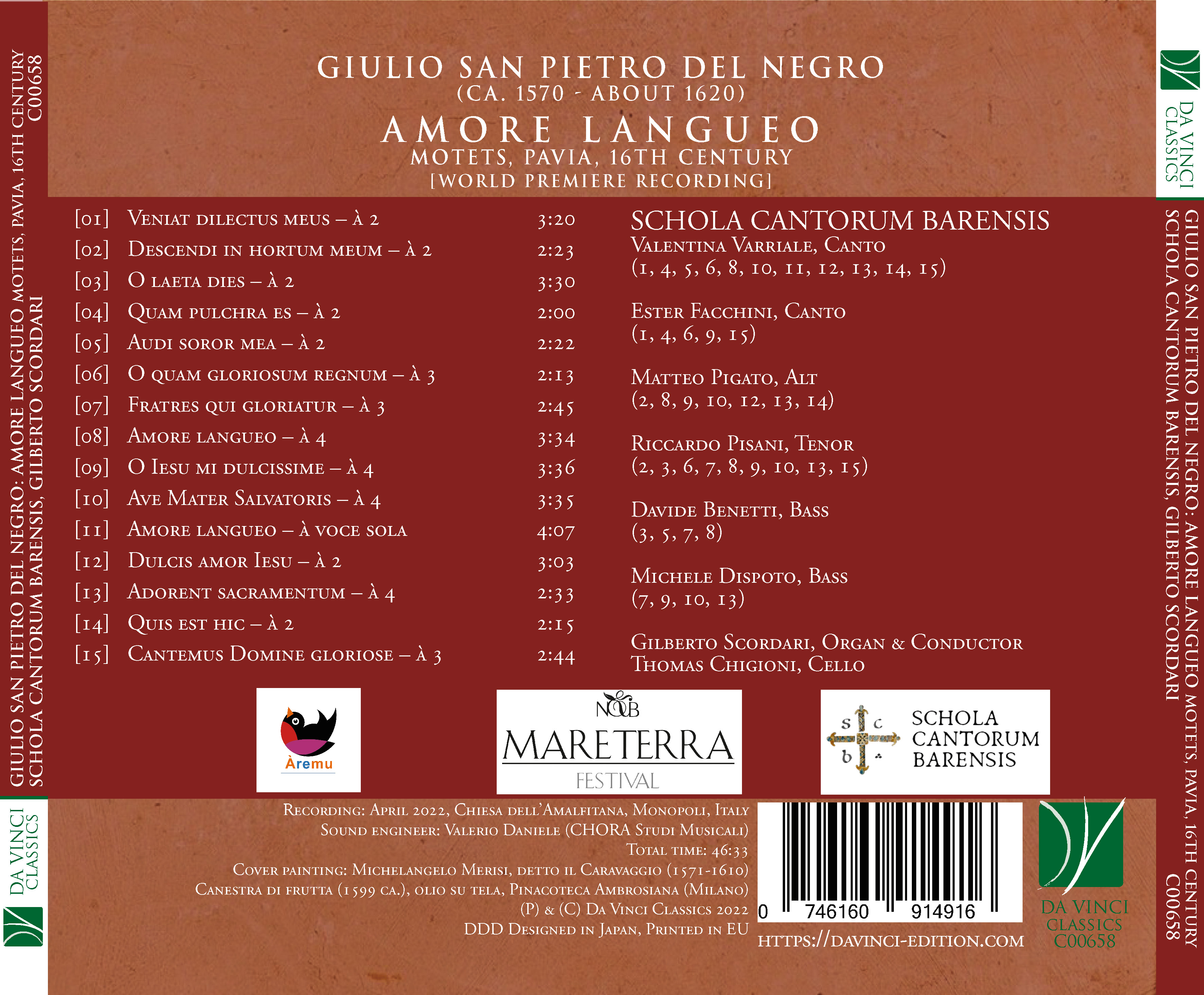 There is still no consideration of the musical depth of Giulio San Pietro del Negro, an avant-garde composer of the early 17th century, Salentinian by birth (from Lecce) but Lombardian by artistic adoption. Thanks to in-depth studies conducted by Maria Giovanna Brindisino and Sarah Marianna Iacono, we have a rich and varied historical-biographical profile of del Negro: from a young age (1580-1600) the composer lived in Lecce; during those two decades, he probably studied under the direction of maestro di cappella Francesco Antonio Baseo; then, in the first decades of 17th century, he was warmly welcomed into the Lombardian artistic environment (artists and writers from the Accademia degli Inquieti in Milan and the Affidati in Pavia).
Born around 1565 in a Genoese family based in Lecce, Giulio was the third of four sons of the noble man-at-arms Filippo: his older brother Giovanni Battista is Baseo’s Primo libro dei madrigali dedicatee (Venice, 1573), in which Giovanni and his brother Pasquale are praised for their musical talents and progress. At that time, Giulio was still too young and probably benefited from maestro Baseo’s teachings in the following years.
In 1634, the historian Giulio Cesare Infantino wrote the Lecce Sacra book in which he briefly outlined the biographical profile of the four del Negro brothers. He started by describing Giovanni Battista. “Giovanni Battista San Piero di Negro can certainly be regarded as a Leccese warrior, since he, like his brothers, was born in Lecce. Giovanni Battista bravely served in the Flanders and Italian wars for eleven years. He was the brother of Pasquale San Piero di Negro, who excelled in duelling and music-making. […] And the same for Giulio San Piero di Negro, an excellent musician, whose many compositions he printed himself, reflect his tremendous talent. The fourth son Agostino San Piero di Negro – gentleman and man-at-arms – is still living today”. From Infantino we therefore conclude that in 1634 Giulio is no longer alive: his death must be placed after 1620 (the year of his last printed production) and before 1634.

While Giulio’s first printed work – Gl’Amorosi pensieri (1607) – is still linked to his cultural club in Lecce, prints dated from 1613 reflect his acquaintances in the Lombardian area. More specifically, they prove that contacts were made with Carmelite Cherubino Ferrari. Ferrari was a theologian at Duke of Mantua’s court, academician of the Inquieti in Milan, and an enthusiastic commentator of Monteverdi’s Orfeo. Furthermore, other relations with the Count of Sartirana Carlo Mercurino Arborio Gattinara are revealed (he was a promoter of the Accademia degli Affidati in Pavia). Del Negro’s contacts with the Milan virtuoso bass singer Ottavio Valera are particularly interesting, too. One of the composer’s madrigals is dedicated to Valera; the piece is in the collection Grazie et Affetti, published by Filippo Lomazzo in 1613. In those years, the singer Valera appears as the dedicatee of other madrigals by Giovanni Ghizzolo and Sigismondo d’India, all published by Lomazzo. Therefore, the latter might have had direct contact with del Negro in the same cultural circle devoted to the Seconda prattica. The same thought would apply to Francesco Rognoni Taegio, with whom del Negro shared the “alla bastarda” practice. As further confirmation of this hypothesis, the collection Grazie et Affetti contains one of the first three recurrences of the indication “in stile recitativo”; the other two appear precisely in madrigals by D’India (1609) and Ghizzolo (1610), both published by the same publisher in Milan.

The dedication to Carlo Mercurino Arborio Gattinara in the Canti accademici concertati (Venice, 1620) is not the only evidence of Giulio’s links to the environment of Pavia: some texts used in Grazie et Affetti come from a collection written by monk Ippolito Cembroni and dedicated to the Affidati. Lastly, the fifteen motets subject of this recording come from three collections – dating respectively 1621, 1624, and 1629 – promoted by Don Lorenzo Calvi, a musician of the Cathedral of Pavia: their authorship can be attributed to Del Negro thanks to Sarah Iacono’s musicological researches. Giulio’s compositions are included among those composed by “eccellentissimi autori” like Claudio Monteverdi, Tarquinio Merula, Alessandro Grandi, Giovanni Rovetta, Giovanni Ghizzolo and Nicolò Corradini.

The texts of the motets consist of partly reworked and interpolated excerpts from the Song of Songs (1, 2, 5, 8, 11). The remaining ones come from various feasts of the liturgical year: Christmas (3), Marian (4, 10) or other Saints (6, 7, 14, 15) festivities, and Eucharistic Solemnities (9, 12, 13). Worthy of note is the text of the motet Quis est hic for the feast of St. Augustine, which takes us back to Pavia: there, in the Basilica of San Pietro in Ciel d’Oro, rest Saint Augustine’s remains.

The composing style is empowered with surprising fluidity: for example, the refined textual and imitative embroidery between the voices is very interesting. Sometimes it consists of short motifs (Veniat in 1, Descendi and Veni in 2, Alleluia in 3, Audi in 5, Meruit in 10, Moriar and Tu lux in 12) and other times on whole sections of the motet (Quam pulchra es, O quam gloriosum, Fratres qui gloriatur, Cantemus Domine gloriose). Although not frequently, the homorhythmic sections are used wisely in order to emphasize the choral aspect of some texts: see, among others, the ternary Alleluia of O quam gloriosum (which rhythmically and harmonically recalls the Villancicos of Latin-Hispanic tradition), the final Amore of the ternary ‘refrain’ of Amore langueo (with its beautiful ‘not prepared’ seventh), the evocative Ave, plena gratia in the motet Ave Mater Salvatoris or the powerful four voices-incipit in Adorent sacramentum (followed by a laudes with a ‘monteverdiano’ flavour). Equally remarkable are the contrapuntal artifices used on various occasions, such as the heartbreaking en morior in the final part of Amore langueo (n. 8), the harmonic complexity of qui te gustant esuriunt in the motet n. 9, or the beautiful final interlocking of the voices in the same motet on the words O Iesu mi dulcissime. An extraordinary lyrical masterpiece is finally the motet ‘a voce sola’ Amore langueo (n. 11), with its sharp contrast between the sweetness of langueo and the advance of aperi: the whole culminates with a tender final whisper on the three morior.

These fifteen motets, authentic miniatures of the new musical taste of Seconda Prattica, testify to the value of a composer still too little known and performed. We hope that this work will help to renew this interest, as well as throw new light on a music season that is anything but dark and peripheral in Apulia and especially in the Otranto area.
Gilberto Scordari © 2022
(English translation by Silvia Zanaboni)

Gilberto Scordari:
Founded in 2018 and conducted by Gilberto Scordari, the SCHOLA CANTORUM BARENSIS is a vocal-instrumental ensemble specialized in the musical repertoire of the sixteenth to eighteenth centuries, performed on period instruments and respecting the most recent discoveries of historically informed performance practice. It aims, since its beginnings, at becoming a meeting point for the best Pugliese Early Music performers and for professionals coming from other parts of the Italian Peninsula and of the European Continent.
The group debuted in Bari (Puglia) in December 2018, inaugurating the BARION FESTIVAL with a programme focusing on German Advent music of the seventeenth and eighteenth century (Bach, Bruhns, Schütz, Praetorius). Due to their particular attention for the revival and reappraisal of the unpublished repertoire of the Pugliese school, the ensemble chose to dedicate this first discographic project to FRANCESCO ANTONIO BASEO, the Chapel Master of the Lecce Cathedral between 1573 and 1582, and also the true “founder” of the polyphonic school in the Terra d’Otranto.
Gilberto Scordari (b. Lecce, 1977) studied at the Conservatory “San Pietro a Majella” in Naples. In 2006 he graduated in Organ under the guidance of M° A. Robilotta with honours and special praise, and, in 2007, he graduated (Laurea di Primo Livello) in Theory and Techniques of musical composition, under the guidance of M° E. Renna, with honours. He continued his studies at the Schola Cantorum Basiliensis (in Basel, Switzerland), completing them with a Master’s in Early Music under the guidance of Wolfgang Zerer, and obtaining the Award assigned by the Basler Organistenverband to the best graduate. In 2011 he obtained a Bachelor’s in Theology at the Pontificia Facoltà Teologica dell’Italia Meridionale of Naples with a dissertation about the relationship between Bach’s music and the Gospel of John in the Toccata and Fugue BWV 538.
He was awarded an ex-aequo First Prize at the National Organ Competition of Viterbo in 2005 (Category B) and he performed as a soloist throughout the national territory and abroad (France, Switzerland, Germany, The Netherlands, Bolivia, Mexico and USA). He has been the continuo player of the Ensemble Gilles Binchois (Dominique Vellard) and of other Early Music ensembles (Zenit, Prothimia, Hortensia Virtuosa, De Finibus Terrae). Since 2018 he conducts the Schola Cantorum Barensis, an ensemble founded by him and dedicated to the rediscovery of the unpublished Pugliese repertoire between 1500 and 1700.
Some of his compositions have been performed within the framework of important international seasons; his Toccata in Fuga for the organ was awarded the Third Prize ex-aequo at the “Manoni 2006” competition of Senigallia (when the Jury was presided by Luigi Ferdinando Tagliavini). Currently he is writing – together with French composer Dominique Vellard – an opera for choir, soloists and small ensemble inspired by Antoine de Saint-Exupéry’s Le Petit Prince.
He has been the titular organist at the Basilica of the Ss. XII Apostoli in Rome (2011-2) and he founded there the Frescobaldi Festival. In 2016 he published, together with Anna Robilotta, the first of three volumes dedicated to the analysis and performance of the Fiori Musicali by the great Ferrarese composer, who is buried in that very church in Rome. Since 2019 he gives a series of theoretical/practical courses focusing on historical counterpoint (ninth to sixteenth century) and on the evolution of imitative instrumental forms from the Ricercare to the Fugue (sixteenth to eighteenth century) at the Scuola di Musica Silence in Maglie (Lecce). He is the founder and artistic director of the Festival N&B MARETERRA in Puglia. He currently lives in Naples where is the Cathedral organist.

Giulio Santo Pietro de’ [Del Negro, Giulio Santo Pietro] Negri [Negro]
(b Milan; fl 1607–20). Italian composer. He seems to have spent most of his life in Milan, though he may briefly have lived at Lecce, at the opposite end of Italy, since his op.5 includes an occasional piece celebrating an event there. He was probably of independent means and, as a composer, an amateur. However, he may have had advice from Ghizzolo, who worked in Milan from 1610 to 1613: certainly the two men seem to have moved in similar circles, for they dedicated individual songs to the same men, for one of whom, a bass, Negri wrote two florid songs headed ‘basso alla bastarda’ (they are in op.5). His op.11 suggests that he belonged to an academy.