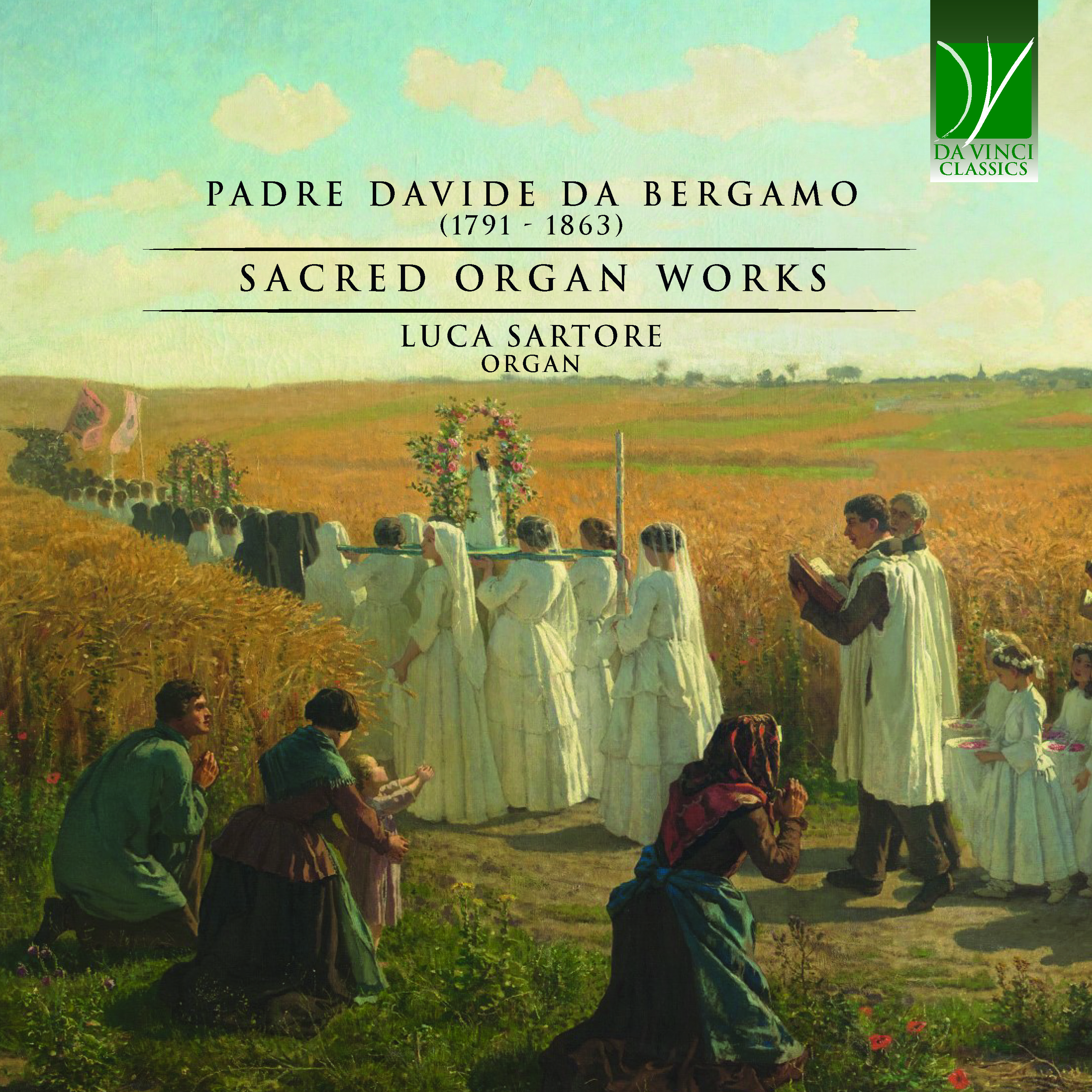 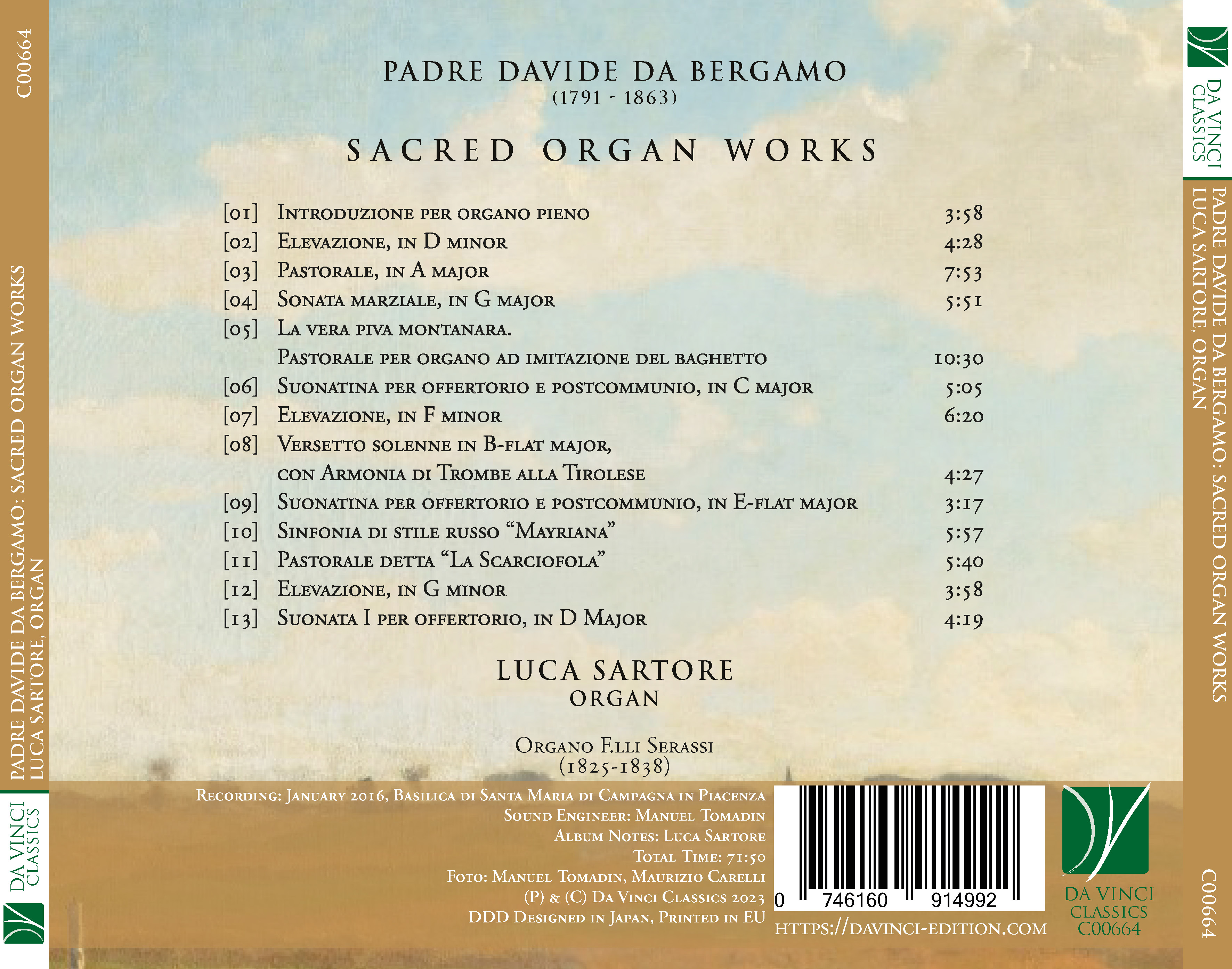 Felice Moretti was born on January 21st, 1791, in Zanica, near Bergamo, to a poor family which soon moved to Bergamo. There, the famous Bavarian composer Johann Simon Mayr was at work; in the city he had founded his “Charitable music lessons”, which would educate, among others, Gaetano Donizetti. Due to his comparatively mature age (15 years), Felice could not be admitted there; however, he had the possibility of entering the pedagogical milieu, knowing Rubini, Donzelli and Donizetti. In those years he studied piano, harpsichord and organ, French guitar, hunting horn, bousine, composition, singing, and stringed instruments. He then became the organist at Torre Boldone, in Zanica, in Gandino. However, when religious orders were reinstated, Felice felt the manifestation of a monastic vocation. He thus began a close correspondence with the Father Superior of the convent of Santa Maria di Campagna in Piacenza, with the wish to be admitted there. On June 2nd, 1818, he was regularly accepted, and he entered the Franciscan Order of the Reformed Minorites, wearing the habit on July 27th, according with the usual formula: “You, who until now, had the name of Felice Moretti, will henceforth be called Fra Davide da Bergamo”. After the novitiate, he was admitted to the vows (on July 26th, 1819), and, once completed the philosophical and theological studies, he was ordered a priest in Pontremoli (October 24th, 1819), celebrating his first Mass. He became a father confessor on June 6th, 1825.
His spiritual itinerary, however, did not make him forget his musical accomplishment; his long-lasting friendship with the Serassi Brothers, organ makers from Bergamo, was renewed by his acceptance of their invitation to test a new organ in Santa Maria di Campagna, which was inaugurated on May 21st, 1838. Thence began a vortex of activity which, for Fr Davide, would finish only with his death: projects, tests, opinions, compositions, experiments, concerts, advice, pedagogy, improvisation, publication: all this happened with an unstoppable frenzy. Whole crowds gathered for his concerts; the best organists, composers and organ builders sought his talent and his knowledge; his output for the organ became gigantic, and, by the time of his death, numbered more than 2,400 works.
The earthly life of Felice Moretti, aka Padre Davide da Bergamo, ended at 11:15 pm on July 24th, 1863, after having indelibly marked the history of the Italian organ in the nineteenth century.

Within the organ panorama of nineteenth-century Italy, the figure of Padre Davide da Bergamo doubtlessly represents a conglomerate of originality and uncommon virtuosity, which was capable of impressing on the art of composition a mark which will be deleted only by the end of the century by the so-called “Caecilian” reform.
In Padre Davide, the Minorite friar’s faith, united to his deep roots delving into the peasant world, led to an interesting fact. From Santa Maria di Campagna in Piacenza – where the friar was, for thirty years, the titular organist on that colossal instrument which still bears memory of him, and which I had the honour of playing for this recording – a new way to worship the Lord took life. I am rather unpersuaded that the sounds of the monk’s huge catalogue owe anything to the Italian Risorgimento: this would have been at least absurd for a religious man of his time – a time when the Pontifical State was ravaged by Garibaldi’s hordes. Instead, I think that the gaiety of the open-air festivals to which young Felice took part with his family, of the wind bands accompanying, in the fields, the processions for Corpus Christi or the Patron saint, the lyricism of the moonlit countryside and the pastoral scenes which represented, live, the Gospel image of the Nativity, this all contributed to the character of his music. While it is related with Mayr, Rossini, and Donizetti – and, in general, with the operatic music of his time – it speaks to the heart of those who still live the life of ploughing, of sowing and of harvesting, of livestock and shepherding.
For this reason, I collected, in this recording, thirteen pieces which represent the Arcadian soul which – I am sure of this – lived in the friar from Zanica, and of his music. It could have accompanied, without being out of tune, the adventures of Don Camillo and Peppone, in that “Bassa” which, as Guareschi used to say, “begins in Piacenza”. It is not by chance that that new way to make church music was born in that city. The style of that music united the solemnity of the Tridentine rite with the carefreeness of the thanksgiving festival for the harvest, but also with the anguish for a summer drought or with the long vigils in front of the fire, in the humid winters of the Po valley.
This is therefore a music of the river Po, and it fully reveals the river’s influence, since the mythological Eridanus enters the recesses of the lands it crosses, and the human beings are unavoidably fascinated by it.
By now, listeners – especially if they are musicians who care for music only – will wonder for what reasons I am speaking of factors which have so little in common with music. I will reply that these “poetico-metaphysical” factors are necessary for understanding the feelings of a churchman such as Padre Davide da Bergamo. It is in the same fashion with other composers: one needs to have lived in full the life in the provinces of the Marca Trevigiana in order to understand Niccolò Moretti, or to have experienced the fiery character of Romagna in order to grasp the music by Pietro and Giovanni Morandi. For this reason, I suggest that these listeners mount over the embankment of the great river, and stay there for a long time, listening to its calm flowing toward the sea.
Therefore, be the listeners organists, or simply lovers of Dame Music, I leave this recording to them, with the hope that they will be able to enjoy, thanks to my engagement, a few instants of a now-lost Arcadia…

Luca Sartore
Born in 1988, Sartore is an organist from the Veneto region of Italy. He began from a very young age his mission as an organist for the Catholic liturgy. At 16, he was appointed the titular organist of the ancient organ built by G. Callido in 1800 for the Cathedral Church of Cittadella, near Padua. Later he became the organist for the Teutonic Order in Alto Adige, and still later he was appointed organist of the Serassi organ (1840) in the Cathedral of S. Michele Arcangelo in Albenga (SV).
He is a passionate performer of the Baroque and style galante repertoire, and in particular of that created by the Venetian school. He performed recitals in Italy, Austria, Germany, France, Czech Republic, Russia, Siberia and Brazil. He performed at prestigious venues such as, among others, the Manaus Theatre in Amazonia (which is the most important theatre in South America), the Church of Saint-Sulpice in Paris, the Archabbey of Sankt-Peter in Salzburg.
For Da Vinci Classics he recorded a monographic album on Padre Davide da Bergamo, by whom he edited a collection of unpublished works for the Armelin publishing company of Padua.
He is currently recording the complete works for the organ by Giovanni Morandi. He is the titular organist on the prestigious organ by F. Dacci (1784) in the Church of the Nativity of the Blessed Virgin Mary, in Santa Maria in Punta (Rovigo), by the delta of the Po.