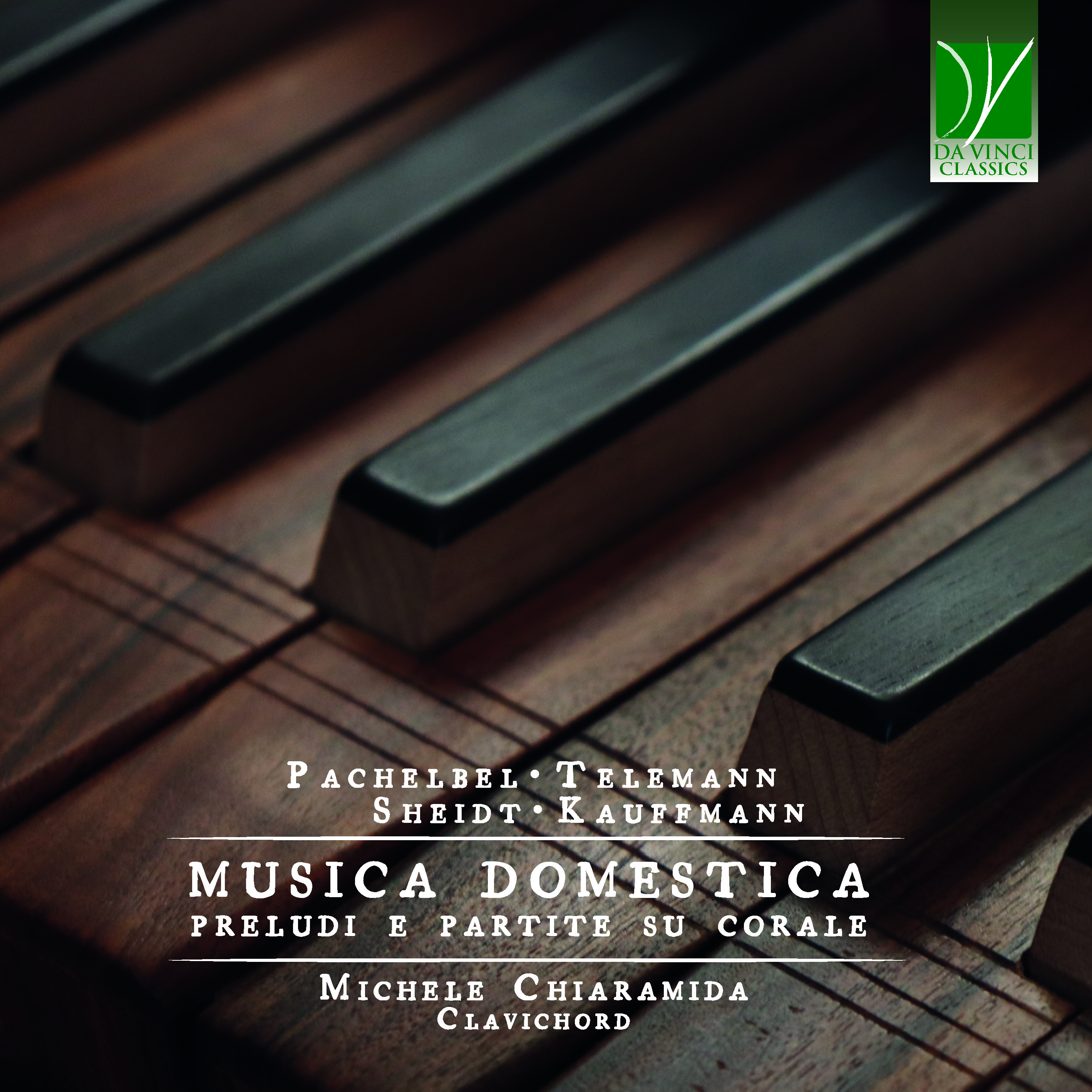 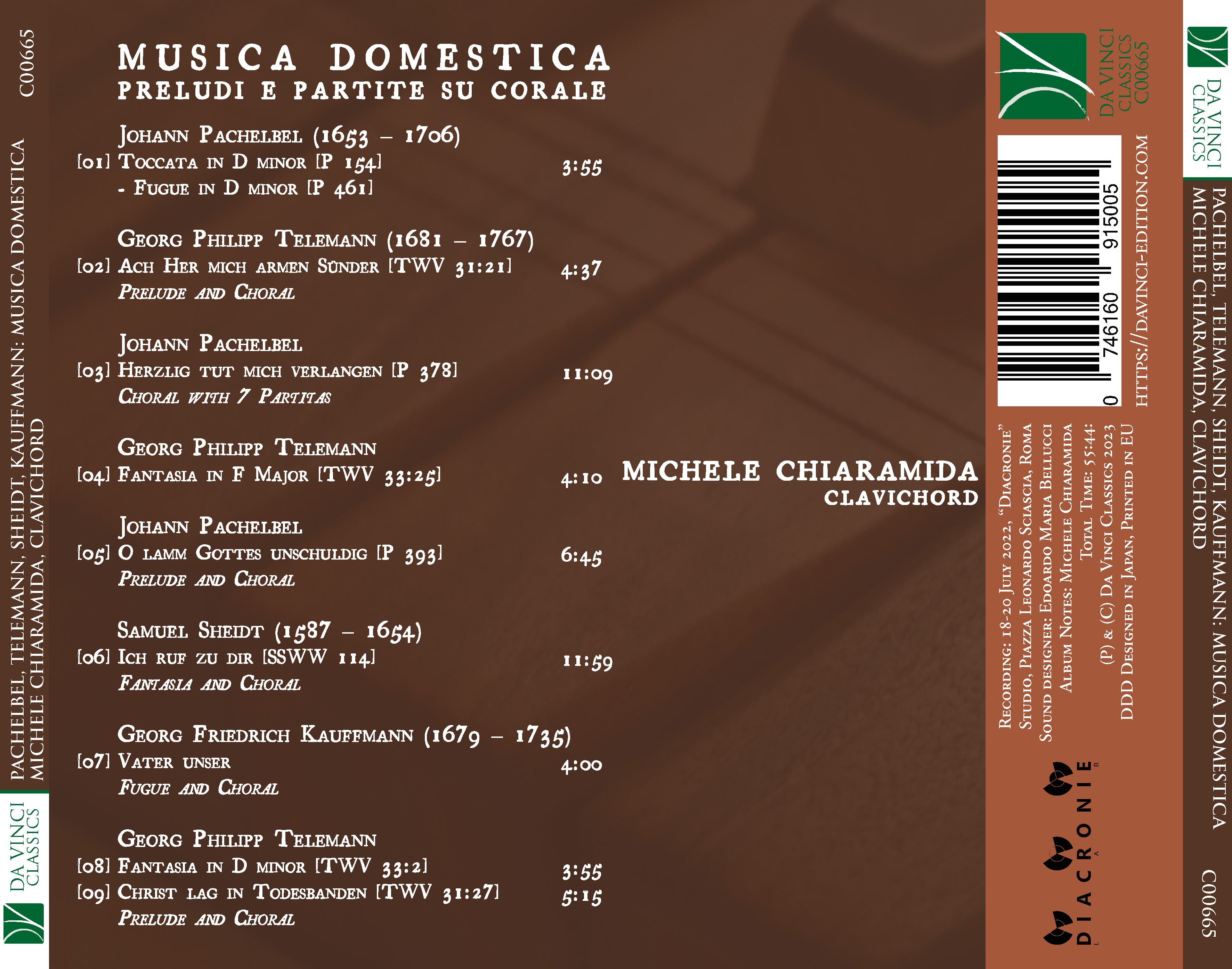 Musica Domestica.
Chorale Preludes and Partitas
The great relevance of choral practice in the Lutheran context (not only as the pivotal element of liturgy, but also as an essential instrument for the spiritual and pedagogical education of the youth) is testified by the numerous hymn collections which, starting from Luther himself, were prepared for both liturgical and private use. This very substantial repertoire includes both pieces created ex novo and German-language elaborations of tunes derived from the plainchant repertoire. It displays an extreme heterogeneity of subjects, from the definition of theological-catechetical elements to vernacular versions of the Psalms. This CD production aims therefore at representing the importance of such hymns within the ordinary and private life, since this repertoire was ordinarily employed within the family context, as a spiritual and recreative exercise. The numerous collections of Chorales and spiritual songs for common usage bear witness to a performing practice including an intonation or prelude performed at the harpsichord – or, more frequently, at the clavichord – after which the chorale was sung, accompanied by the same instrument. A paradigmatic example is the collection published by Schemelli in 1737, including more than a thousand spiritual arias and chorales, presented in the typical form with a soprano voice and continuo.
Along with the practice of playing preludes to the Chorales – preludes which were performed by a family member, frequently improvised – the practice is documented of playing instrumental interventions at the keyboard alternatim with the singing, replacing some stanzas. This applies to the collection of Partitas, whereby the various keyboard elaborations of the same melody were employed to replace some stanzas. This aspect also justifies the compositional style of the individual partitas, which is characterized by the use of rhetorical figures and ornamental figurations corresponding to a precise codex, identified by the recurring definition of musica poetica.
The choice, therefore, to employ the clavichord for the preludes and fantasies, and the following intervention of a youthful female voice singing a stanza of the corresponding Chorale was mediated by our will to offer, as much as possible, this intimate and private dimension. For this task, singer Teresa Varelli was chosen: she is one of the best students of the course of Baroque singing taught by Raffaella Milanesi, within the Department for Early Music at the Conservatory “O. Respighi” in Latina. We have here a budding singer, therefore, precisely in order to give that familiar, intimate, private and domestic flavour to which we alluded earlier and which aims at becoming the identifying trait of this project.

The selected pieces correspond, first and foremost, to a logic of modal homogeneity, revolving around the finales D and F. This choice was made in order to allow for a flowing listening experience, without sudden and abrupt changes; it is almost a uniform background, where the compositional elements, and the structural, formal, and stylistic features of each piece can be enjoyed in the best possible fashion. The preludes and the great Fantasy by Scheidt follow a compositional logic with a contrapuntal nature, whereby the pre-existing melodic line (i.e. the chorale to which an instrumental introduction is performed) is always recognizable within the voices’ complex texture. The Chorale’s very structure is respected and amplified, with its evident cadenzas toward the end of each line, mapping on the instrumental piece’s building. Pachelbel’s Toccata and his Fugue work as an exordium to the ensuing listening experience, whereas Telemann’s two Fantasies (the first in D, the second in F) were inserted as an intermezzo and a moment of respite.

The clavichord was considered, for centuries, as the favourite instrument of both organists and harpsichordists for their personal study, domestic recreation, and didactic activity. The instrument-building techniques which originate the sound make it an instrument with an infinite expressive potential. It is highly suited for developing the highest bodily control, with the purpose of producing a correctly “live” sound with solid expressivity. The direct connection the performer has with the string through the key and the brass tangent allow, through a suited touch and management of the weight, to perform an extremely varied articulation, highlighting melodic-rhythmical elements which otherwise would remain hidden.
The instrument chosen for this discographic project is a copy of the lower manual of the pedal-clavichord attributed to musician Johann David Gerstenberg; the original is currently in the holdings of the Musikinstrumentenmuseum in Leipzig. This instrument was built in Rome by myself in 2018, and is available at my Rome atelier (www.clavicordi.com).
Michele Chiaramida © 2022

Michele Chiaramida
Michele Chiaramida lives in Rome and teaches Organ, Modality and Gregorian Chant at the Conservatory of Latina. After the diplomas in Organ and in Harpsichord (1990, 1994) and the degree in Musicology (2000) with a dissertation on musical pedagogy of Girolamo Chiti, he has been dedicated on continuo playing and renaissance/baroque keyboard repertoire. He is interested in performance practice on the clavichord and he is a builder of a lot of models of this instrument. In 2005 founds his own company where produce copies of early keyboard instrument, especially clavichords. His workshop is in Rome.
He is also interested in studying the modal systems and the early musical pedagogy and recently has published a volume titled Manuale di canto fermo. Modelli e consuetudini nella prassi didattica tra XVI e XVIII secolo, ed. LIM, Lucca.

Georg Friedrich Kauffmann
(b Ostermondra, Thuringia, 14 Feb 1679; d Merseburg, 24 Feb 1735). German organist and composer. He received his early keyboard training from J.H. Buttstett in Erfurt and continued under J.F. Alberti in Merseburg, with whom he also studied composition. When Alberti suffered a stroke in 1698 which caused paralysis in his right hand, Kauffmann deputized for him, and in 1710 succeeded his teacher as organist at the court of Duke Christian I of Saxony and at Merseburg Cathedral. Kauffmann subsequently became court organist for the Duke of Saxe-Merseburg and was later promoted to court Kapellmeister.

Johann Pachelbel [Bachelbel]
(b Nuremberg, bap. 1 Sept 1653; d Nuremberg, bur. 9 March 1706). Composer and organist. He was one of the leading progressive German composers of his time. Formerly admired chiefly as a composer of organ and other keyboard music, he is now recognized as a leading composer of church and chamber music. His vocal works, in particular, belie his reputation as a somewhat staid composer of organ chorales. They show a thorough familiarity with the rhetorical and pictorial arsenal of 17th-century German texted music and exhibit close attention to detail, which is evident throughout Pachelbel's output.