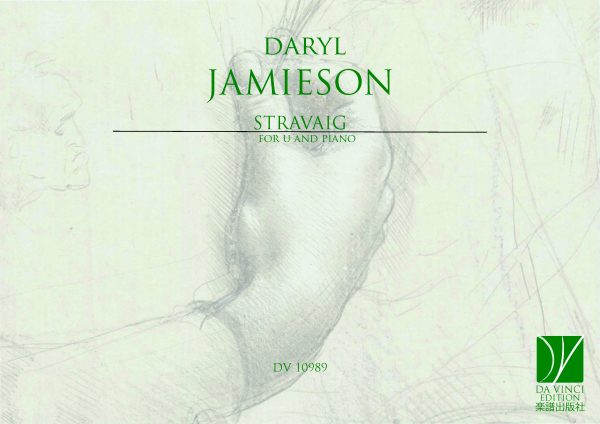 Jamieson, Daryl: Stravaig, for U and Piano

Daryl Jamieson (MMus GSMD PhD Ebor) was born in 1980 in Halifax, Nova Scotia, Canada. He trained in Canada, the UK, and Japan, and currently lives in Kamakura. His artistic practice is rooted in his practical and theoretical studies of Nō theatre, Japanese traditional instruments, and his academic training in Western modernist composition. He is interested in intercultural art, collaborative creation, and rooting art in the political and social environment in which we live. He founded the intercultural music theatre company atelier jaku in 2013 in order to provide a platform for presenting his own works and those of like-minded composers. He currently teaches at Showa University of Music and Zushi Kaisei High School, both in Kanagawa, Japan.

Jamieson’s work focuses on the perception of time and space. Preoccupations with musical time and the psychogeography of historic locations are heavily influenced by his study and practice of Nō theatre and koto, as well as his study of Japanese poetry and art. His most substantial work to date is a trilogy of musical theatre pieces exploring the transience of matter and sound (each about 45 minutes in length) called the Vanitas Series, which received the 2018 Toshi Ichiyanagi Contemporary Prize. In his citation, Ichiyanagi called the Vanitas Series ‘an epic musical work of extraordinarily elegance and contemporary topical perspective’. This series consists of a chamber opera (Matsumushi, 2014), an instrumental musical ritual (fallings [2016] for shō, viola, and cello), and a sung meditation on Kamo no Chōmei’s Hōjōki (Is nowhere free of bad tidings? [2017] for shakuhachi, 2 kotos, biwa, and Japanese percussion).

Other major works include three string quartets (umoregi, warm stones and monkish fires), chamber and orchestral works (the most recent being 2016’s KoNoSo for 25 instruments), many pieces for Japanese instruments (including a shakuhachi concerto called locked darkness, and multiple solo and chamber works for koto, shō, shakuhachi, biwa, and shamisen), solo keyboard works, and many songs. Since 2016 he has begun to incorporate field recordings into his work. His music has been performed by the Quatuor Bozzini, Musiques Nouvelles, the Orchestre National de Lorraine, Ensemble Muromachi, Satoko Inoue, Ko Ishikawa, Christopher Yohmei Blasdel, Yusuke Satoh, Junko Ueda, Naoko Kikuchi, Barbara Pritchard, the Arnold Schönberg Chamber Orchestra, and the University of York Chamber Orchestra.

In addition to Atelier Jaku, he was a co-founder and the composer-in-residence of mmm…, a Tokyo-based trio dedicated to introducing the music of young composers from around the world to Japanese audiences, as well as a founding member of the composers collective Music Without Borders, and a member of the Hogaku 2010 composers group dedicated to writing new music for traditional Japanese instruments.

He is also active as a researcher, writing on the aesthetics of the Kyoto School of 20th-century Japanese philosophers, as well as contemporary music and spirituality. In addition to winning the 2018 Toshi Ichiyanagi Contemporary Prize, he has received grants and awards from the Canada Council for the Arts, the Japanese Ministry of Education (MEXT), the University of York, and the Society of Music Analysis, among others.