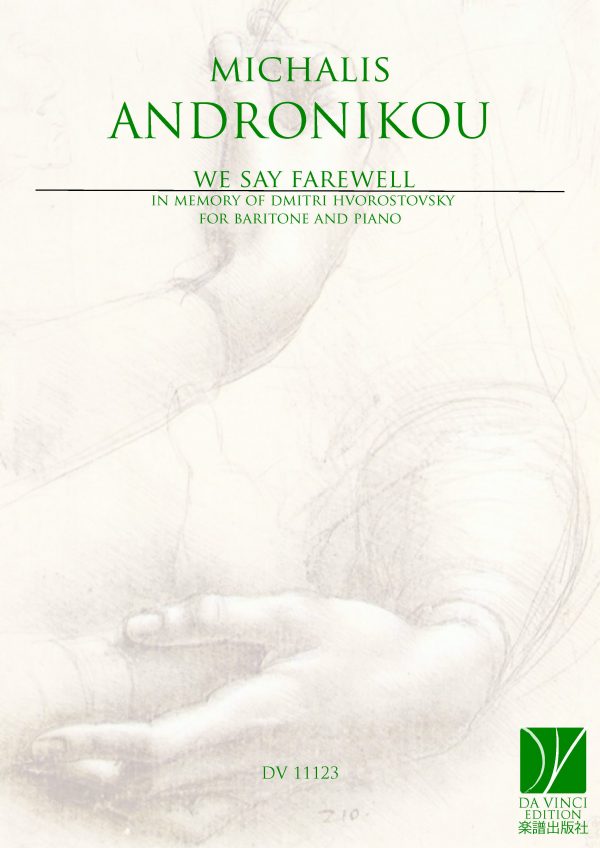 Michalis Andronikou: We Say Farewell, In memory of Dmitri Hvorostovsky, for Baritone and Piano

On November 22, 2017, the Russian baritone Dmitri Alexandrovich Hvorostovsky died at the age of 55 after suffering through brain cancer. He is renowned for his rich vocal tones, his striking white hair, and his compelling presence as he portrayed lead characters on the opera stage. In the wake of his passing, I was invited to write a lyrical poem that paid tribute to this gifted musician. Thus, I gathered words and thoughts from news articles, reviews, and the outpouring of condolences offered by mourners across the globe. I listened to recordings of Dmitriʼs performances and was stunned by the power of his voice. It is out of this abundance that the poem “We Say Farewell” took shape. Michalis Andronikou (Associate Professor of Composition) welcomed my poem and composed music for the lyrics. “We Say Farewell” is a collaborative piece offered in remembrance of Dmitri Hvorostovsky.

Michalis Andronikou (1977– ) holds a PhD in composition from the University of Calgary. He received his Bachelor in musicology from the Department of Music Studies, University of Athens, Greece. He has a Diploma in Classical Guitar, Clarinet and Music Theory from the Trinity College and the Royal Academy of Music, and a Diploma in Byzantine Music from the Argyroupolis Municipal Conservatory. Michalis gained credentials in Harmony, Counterpoint, Fugue, and Music Composition (with Theodore Antoniou) from the Hellenic Conservatory.  Moreover, he has studied Greek folk instruments such as lute, tampoura and bouzouki.
Michalis has composed music for small and large ensembles, theatre plays, art exhibits, movies, songs. Seven CDs with his works have been released, since 2003. His music is published by the Canadian Palliser Music Publishing, the Bulgarian Balkanota, and by Da Vinci Edition (Italy, Japan). He is a member of the Greek Composers’ Union, the Centre of Cypriot Composers, and the Alberta Registered Music Teachers' Association (ARMTA).