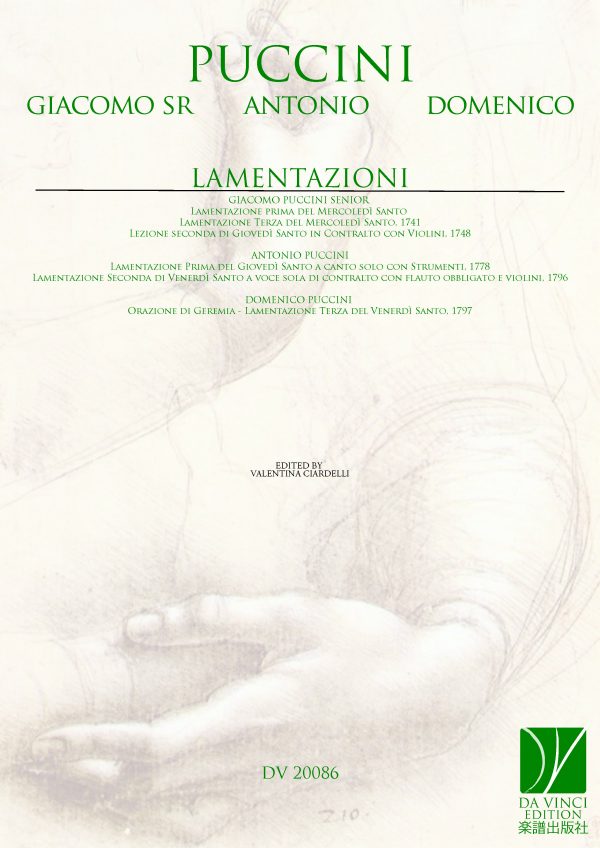 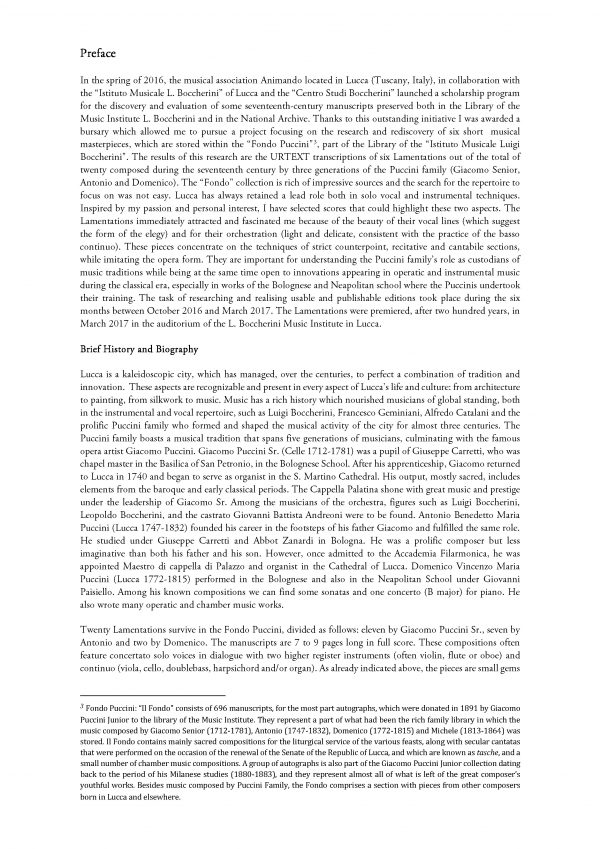 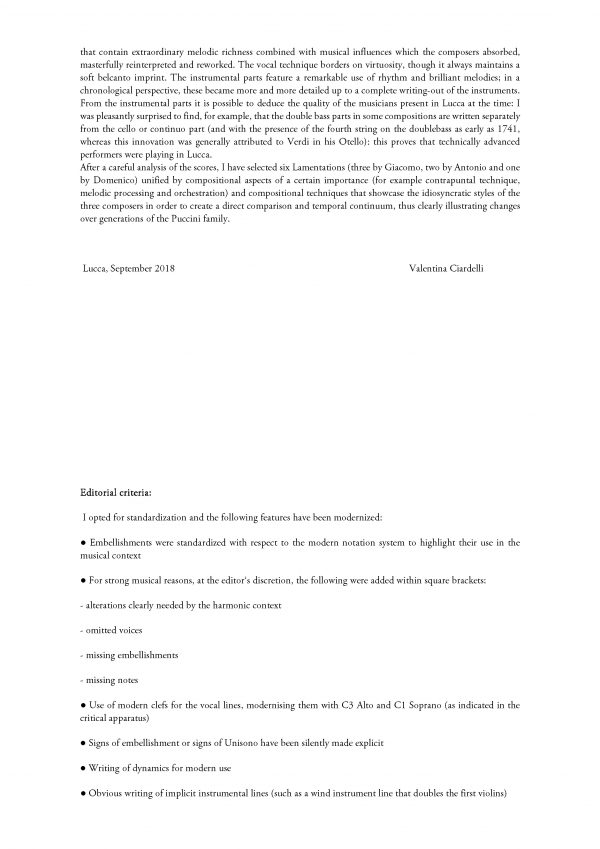 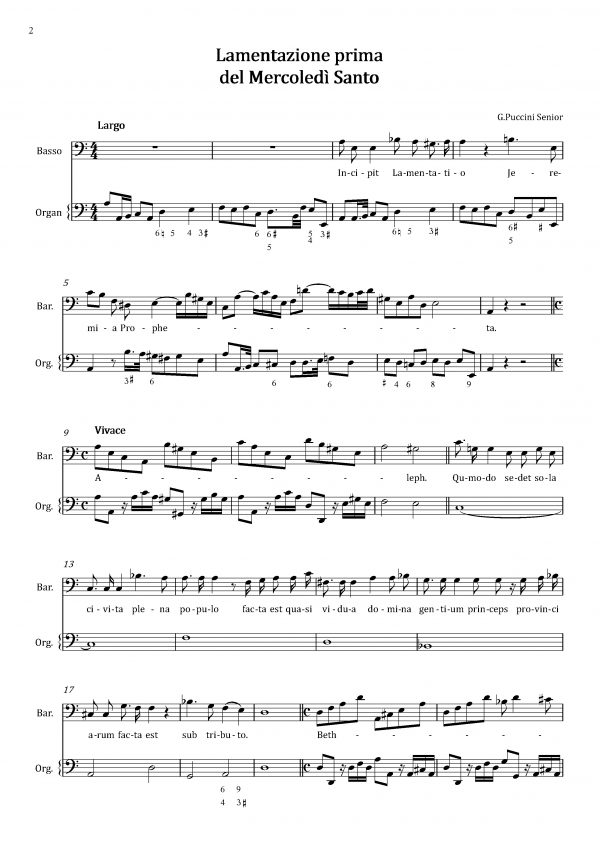 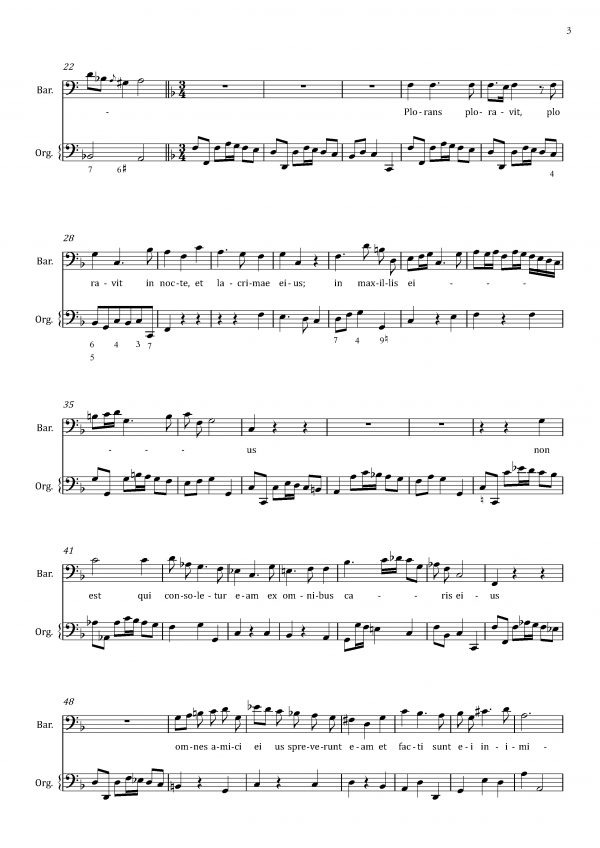 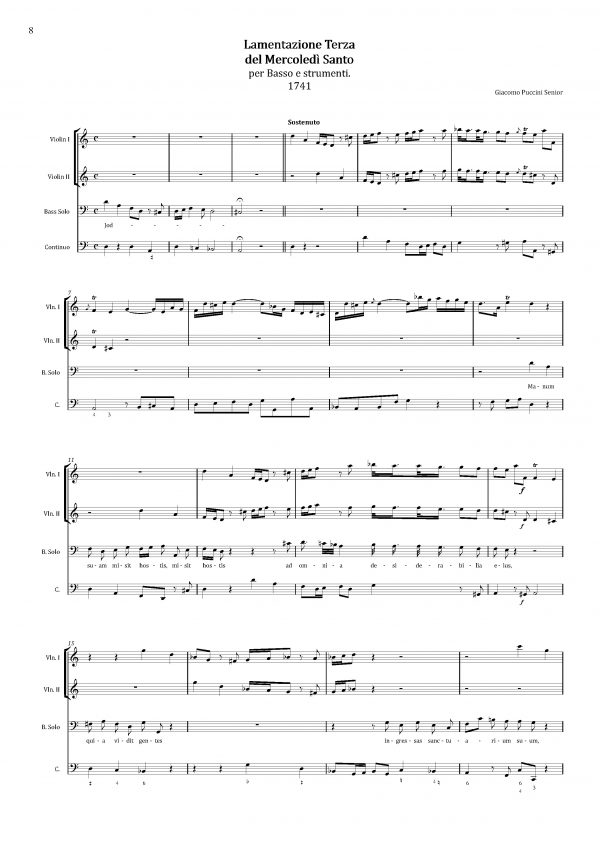 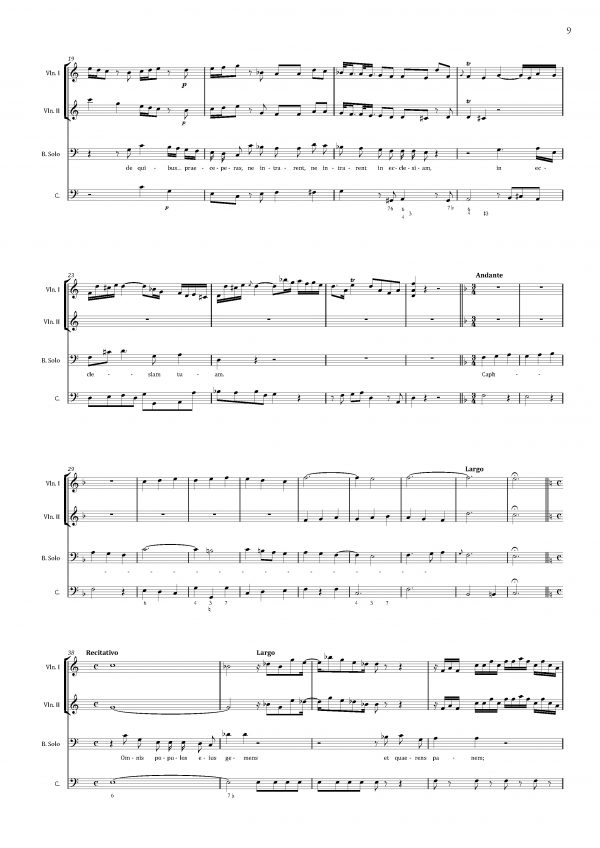 Please contact us using our official Contact Form for hire material. It takes only a few clicks to submit a request.

In the spring of 2016, the musical association Animando located in Lucca (Tuscany, Italy), in collaboration with the “Istituto Musicale L. Boccherini” of Lucca and the “Centro Studi Boccherini” launched a scholarship program for the discovery and evaluation of some seventeenth-century manuscripts preserved both in the Library of the Music Institute L. Boccherini and in the National Archive. Thanks to this outstanding initiative I was awarded a bursary which allowed me to pursue a project focusing on the research and rediscovery of six short musical masterpieces, which are stored within the “Fondo Puccini”3, part of the Library of the “Istituto Musicale Luigi Boccherini”. The results of this research are the URTEXT transcriptions of six Lamentations out of the total of twenty composed during the seventeenth century by three generations of the Puccini family (Giacomo Senior, Antonio and Domenico). The “Fondo” collection is rich of impressive sources and the search for the repertoire to focus on was not easy. Lucca has always retained a lead role both in solo vocal and instrumental techniques. Inspired by my passion and personal interest, I have selected scores that could highlight these two aspects. The Lamentations immediately attracted and fascinated me because of the beauty of their vocal lines (which suggest the form of the elegy) and for their orchestration (light and delicate, consistent with the practice of the basso continuo). These pieces concentrate on the techniques of strict counterpoint, recitative and cantabile sections, while imitating the opera form. They are important for understanding the Puccini family’s role as custodians of music traditions while being at the same time open to innovations appearing in operatic and instrumental music during the classical era, especially in works of the Bolognese and Neapolitan school where the Puccinis undertook their training. The task of researching and realising usable and publishable editions took place during the six months between October 2016 and March 2017. The Lamentations were premiered, after two hundred years, in March 2017 in the auditorium of the L. Boccherini Music Institute in Lucca.

Lucca is a kaleidoscopic city, which has managed, over the centuries, to perfect a combination of tradition and innovation. These aspects are recognizable and present in every aspect of Lucca’s life and culture: from architecture to painting, from silkwork to music. Music has a rich history which nourished musicians of global standing, both in the instrumental and vocal repertoire, such as Luigi Boccherini, Francesco Geminiani, Alfredo Catalani and the prolific Puccini family who formed and shaped the musical activity of the city for almost three centuries. The Puccini family boasts a musical tradition that spans five generations of musicians, culminating with the famous opera artist Giacomo Puccini. Giacomo Puccini Sr. (Celle 1712-1781) was a pupil of Giuseppe Carretti, who was chapel master in the Basilica of San Petronio, in the Bolognese School. After his apprenticeship, Giacomo returned to Lucca in 1740 and began to serve as organist in the S. Martino Cathedral. His output, mostly sacred, includes elements from the baroque and early classical periods. The Cappella Palatina shone with great music and prestige under the leadership of Giacomo Sr. Among the musicians of the orchestra, figures such as Luigi Boccherini, Leopoldo Boccherini, and the castrato Giovanni Battista Andreoni were to be found. Antonio Benedetto Maria Puccini (Lucca 1747-1832) founded his career in the footsteps of his father Giacomo and fulfilled the same role. He studied under Giuseppe Carretti and Abbot Zanardi in Bologna. He was a prolific composer but less imaginative than both his father and his son. However, once admitted to the Accademia Filarmonica, he was appointed Maestro di cappella di Palazzo and organist in the Cathedral of Lucca. Domenico Vincenzo Maria Puccini (Lucca 1772-1815) performed in the Bolognese and also in the Neapolitan School under Giovanni Paisiello. Among his known compositions we can find some sonatas and one concerto (B major) for piano. He also wrote many operatic and chamber music works.
Twenty Lamentations survive in the Fondo Puccini, divided as follows: eleven by Giacomo Puccini Sr., seven by Antonio and two by Domenico. The manuscripts are 7 to 9 pages long in full score. These compositions often feature concertato solo voices in dialogue with two higher register instruments (often violin, flute or oboe) and continuo (viola, cello, double bass, harpsichord and/or organ). As already indicated above, the pieces are small gems that contain extraordinary melodic richness combined with musical influences which the composers absorbed, masterfully reinterpreted and reworked. The vocal technique borders on virtuosity, though it always maintains a soft belcanto imprint. The instrumental parts feature a remarkable use of rhythm and brilliant melodies; in a chronological perspective, these became more and more detailed up to a complete writing-out of the instruments. From the instrumental parts it is possible to deduce the quality of the musicians present in Lucca at the time: I was pleasantly surprised to find, for example, that the double bass parts in some compositions are written separately from the cello or continuo part (and with the presence of the fourth string on the double bass as early as 1741, whereas this innovation was generally attributed to Verdi in his Otello): this proves that technically advanced performers were playing in Lucca. After a careful analysis of the scores, I have selected six Lamentations (three by Giacomo, two by Antonio and one by Domenico) unified by compositional aspects of a certain importance (for example contrapuntal technique, melodic processing and orchestration) and compositional techniques that showcase the idiosyncratic styles of the three composers in order to create a direct comparison and temporal continuum, thus clearly illustrating changes over generations of the Puccini family.
Lucca, September 2018

Antonio Puccini (b Lucca, 30 July 1747; d Lucca, 10 Feb 1832). Composer, son of (1) Giacomo Puccini (i). With financial help from the government of Lucca, from 1768 he studied under Carretti and Abate Domenico Maria Zanardi in Bologna, where he met his future wife, Caterina Tesei (1747–1818), an excellent keyboard player, teacher and copyist. In 1771 he became a member of the Bologna Accademia Filarmonica, through the offices of Padre Martini, to whom he had been entrusted by his father. He was invited to present his works for the feast of S Antonio, patron of the academy. Having returned to Lucca he worked with his father, preparing to succeed him in his post at the Cappella di Palazzo and as organist of S Martino, which he did, by decrees of 1772 and 1779. After the suppression of the Cappella di Palazzo (31 July 1805) by the new governors, he continued to produce and to organize the music for the feasts of S Croce and for other liturgical occassions. He was a loving and able custodian of the family’s rich library, and compiled the valuable Repertorio (1818) of its contents.

Antonio’s sacred compositions consist of a free series of closed movements in various styles, some concertato with soloists, double choir and orchestra, some a cappella, in motet style, and some in aria style. His Messa da Requiem (1792) was greatly prasied for its ‘gusto patetico e capriccioso’. His tasche reveal a new and personal style: the opening symphonies, which are sometimes in sonata form, employ a harmonious Classical style and an orchestra larger than his father’s; the arias and the accompanied recitatives achieve variety and expression through unexpected interpolations from obbligato instruments.

Domenico Puccini (b Lucca, 5 April 1772; d Lucca, 25 May 1815). Composer, son of (2) Antonio Puccini. He was first taught by his parents and – with a bursary from the Lucca authorities, like his father – continued his studies in Bologna (1793–6) under Mattei and in Naples (1797–9) under Paisiello, which undoubtedly directed him – the first of his family – towards a theatrical career, and he remained in frequent, friendly correspondence with him. Having returned to Lucca, after the dispersal of the Cappella di Palazzo where he worked with his father (he also played beside him on the organ of S Martino), Domenico was from 1806 to 1809 director of the small Cappella di Camera (founded by Napoleon’s sister, Elisa Baciochi, then Regent of Lucca) and of a municipal chapel from 1811 to 1815. His sudden death in that year was not, as has been claimed, the result of poisoning for political reasons.

In an early 19th-century engraving by Luigi Scotti, Domenico appears with other well-known contemporary musicians, a sure sign of the esteem that his music enjoyed. Domenico’s output is more varied than that of his father and grandfather: besides sacred music, often sensitive to changing political conditions, he wrote instrumental and vocal chamber works, but was chiefly involved in opera composition. His style is completely theatrical, even in sacred and vocal chamber compositions; it differed from that of his father so much that his father could not complete his unfinished Te Deum. The style is very simple and fluid; in his operas, especially the comic ones, he reveals an outstanding dramatic sense and a fresh and spontaneous inspiration, along with the assimilation of styles present in the comic operas of the time, particularly those of the farsa.

Giacomo Puccini Sr (b Celle dei Puccini, Lucca, bap. 26 Jan 1712; d Lucca, 16 May 1781). Composer. He lost his father, Antonio Puccini, at an early age and, together with his brother Michele (b Celle dei Puccini, Lucca, bap. 26 Dec 1714; d Lucca, 27 Sept 1782), who became a churchman and a musician, settled in Lucca in 1719 where he began to study music. In 1732–4 he completed his studies with Carretti in Bologna, where he met Padre Martini, with whom he corresponded for many years. From 1739 until his death he was director of the republic’s cappella di Palazzo, and from 1740 organist at the cathedral of S Martino as well as being maestro di cappella and organist at the other principal churches in Lucca. A vivid picture of his frenetic activity as a composer, director and organizer of musical events in and around Lucca emerges from his diary, the Libro delle musiche annue ed avventizie (1748–58, in I-La). From 1743 he was a member of the Bologna Accademia Filarmonica. Pietro Guglielmi was one of his pupils.

Giacomo’s output is mostly of sacred music, of various kinds, for a wide variety of ensembles. The most solemn occasions were those for the annual feast of S Croce, with Mass and Vespers for two choirs and two instrumental groups, augmented by the mottettone, a grand composition for two choirs and two orchestras (one from 1753 has survived). His style is distinguished by good vocal writing and counterpoint and uses the Baroque technique of contrasting diverse vocal and instrumental groupings, always with marked rhythm. The treatment of the text shows considerable variety, alternating fugal with homophonic sections and brilliant, fast movements with slow, expressive ones, with frequent recourse, in the soloists’ parts, to aria style, and, in the obbligato writing, to concerto style. He also composed dramatic music for the tasche (elections of the government of Lucca, usually held every two years). The tasca, in three parts or giornate, each by a different composer, had librettos in praise of liberty drawn from classical history. Musically they consisted of a symphony, a series of recitatives and arias, and some choral pieces. The orchestra was made up of strings and basso continuo, with the addition of an increasing number of wind instruments. The arias were in the standard contemporary forms, but were particularly notable for the variety of vocal styles and their adherence to the texts.