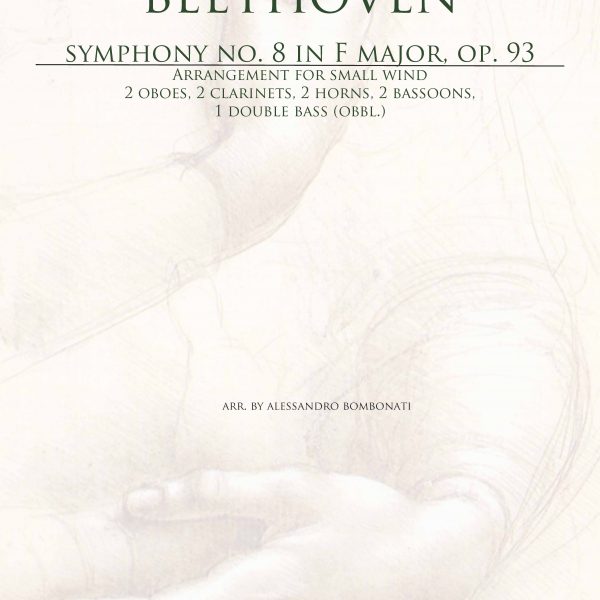 The classical repertoire associated nowadays with the wind octet is based on original compositions very rarely meant to be performed in concert halls and mostly used as pure entertainment music in palaces or outdoors (Divertimenti, Serenate, Notturni, Harmoniemusik).
Authors such as Haydn, Mozart, Beethoven, Hummel and others less known including Rosetti, Went, Krommer and Druschetzky wrote original compositions for wind octet although the wider repertoire is represented by transcriptions from operas.
in 1782 Vienna, Emperor Joseph II founded the Imperial Harmoniemusik (kaiserlich-königliche Harmonie) composed of a wind octet with the best Viennese musicians to enjoy, in the comfort of his palace those arias and opera Ouvertures performed in Viennese theaters.
A typical example of the use of wind octet during the second half of the eighteenth century can be found in the final scene of “Don Giovanni” by Mozart. Here Leporello recognizes, among the music played on stage by a wind octet, arias from operas such as Una Cosa Rara by VicenteMartìn y Soler and, I Litiganti by Giuseppe Sarti (very successful operas in Vienna at the time) and the aria Non più andrai from Le Nozze di Figaro by Mozart himself.
This fashion spread quickly throughout the Empire together with the wind octet popularity; famous Harmonie were those of Prince Esterhazy and of Prince Elector Maximilian Franz in Bonn, brother of Emperor Joseph II and for whom the young Beethoven worked.
The first experience Beethoven had with wind music, still very fashionable at the end of 1700, can be dated within this context; from a letter of December 1793 by Elector Maximilian Franz to Haydn in response to a request to further prolong and finance Beethoven’s stay in Vienna:
“I received the music by young Beethoven you sent me with your letter. Since, however, with the exception of the fugue, he had already composed and performed it here in Bonn, a long time before embarking on his second trip to Vienna, I do not think that this is an evidence of his progress parts, an oboe concerto, variations for forte piano and a fuge” listed in Haydn’s letter.
Thus, it is very likely that the Parthie referred to by Haydn is the octet for winds of which today is preserved the manuscript entitled “Parthia dans un concert”.
Almost all Beethoven’s wind music appears to have been created during his youth: The octet in E-flat, the sextet in E-flat and Rondino, first thought as “Rondò, namely the last octet movement and, then, published later under the name “Rondino”, were probably composed for musicians of the Harmonie in Bonn .
The popularity of the Harmonie meant that even some compositions by Beethoven were transcribed both for commercial purposes as well as to make them more popular to the general public.
A few months after the premiere of “Fidelio” on May 1814, parts of the opera were transcribed for wind octet by clarinetist W.Sedlak; The Settimino Op.20, one of the most popular compositions by Beethoven, was adapted for wind octet by G.Druchetzky; Symphony N° 7 saw the light simultaneously in two versions: the orchestral version and the one adapted for octet. That was not an act of intellectual piracy but probably a marketing strategy of the publisher with the authorization of Beethoven himself.
The transcripts presented in this edition fall within this eighteen century tradition and not only do they enrich the repertoire for wind instruments with music of exceptional interest and beauty but they also offer students a first approach to this important symphonic repertoire.
Alberto Grazzi

These reductions of Beethoven’s symphonies want to discover the origins of the composition and instrumental practices of the nineteenth century.
Most of the operatic and symphonic repertoire was commonly transcribed for “Harmonie” (small group of wind instruments) in order to spread the news of the music market in the courts of the great capitals of Central European kingdoms. Thus, inspired by the style and the instruments of that period I have engaged in this series of works for small wind ensembles, always trying to identify myself, as much as possible, with the minds of those great transcribers, adapters and composers like W.Sedlak (adaptor of the seventh), J. Triebensee, J.N. Wendt and others. From a technical point of view, the classic octet (2 Oboes, 2 Clarinets, 2 Horns, 2 Bassoons) has been enriched with the double bass, at the time already tacitly accepted as a doubling of the second bassoon, and with the flute, essential sheen for the orchestral brilliance of Beethoven symphonies.
It must be underlined that the use of contrabass, present throughout this series of adaptations is to be considered doubling only if indicated as “ad libitum”.
In contrast, where “obbligato” is mentioned, it means that the instrument cannot be omitted without incurring into harmonic errors (wrong tabs) or ruining the emotional energy and the instrumental substance required by the author’s music at various times.
The complexity of Beethoven orchestration has often employed the double bass (in these reductions) to solve problems concerning the management of the parts.
I refer, for example, to the third symphony where the three horns in the original score forced me to delegate, in the reduction work, the part of the third horn to the first bassoon, redistributing consequently the parts of the two bassoons between second bassoon and double bass.
The canonical profile of the adaptation has been maintained where it was possible and allowed by the arrangement of the parts, that is, for classic octet with doubled bass. So it was for the eighth, the first and the fourth.
The special brilliant Flute’s color was necessary in the fifth, the sixth, the seventh, the third and in the second, not only for the presence of his important solo, too much defined on the tone of this instrument, but also for the required “candor” of the instruments the flute allows through its extension towards the acute.
Again, the flute solved many problems of harmonic and dynamic woodwinds management during the reworking. These reductions mirror the recommendations in the original manuscripts about pace, sections and dynamics.
It is essential to recall that, at the time, the consolidated performance practice prevented composers from writing articulations (dots, marks and slurs) however routinely performed and, therefore, taking into account that it is urtext material, where there is an illogical lack of indications, performers choose how to logically interpret the score.
Alessandro Bombonati