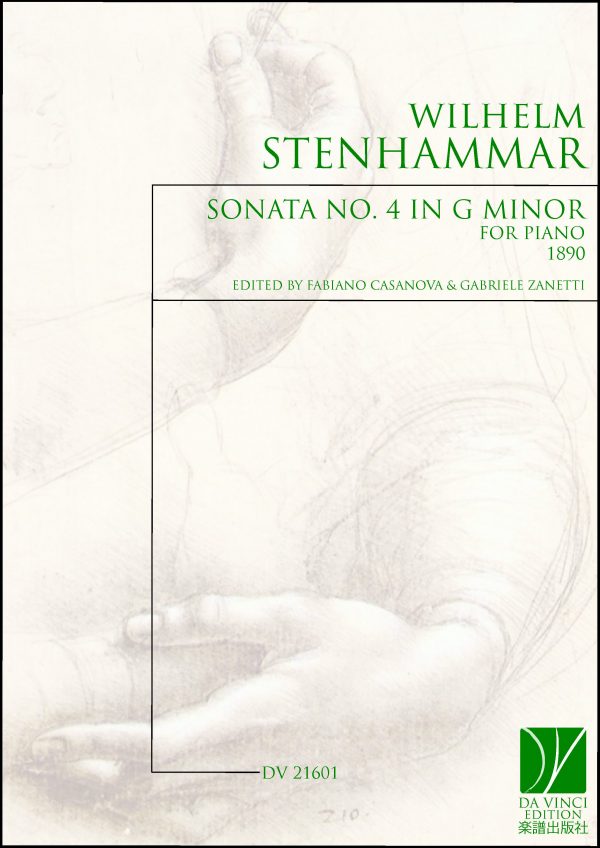 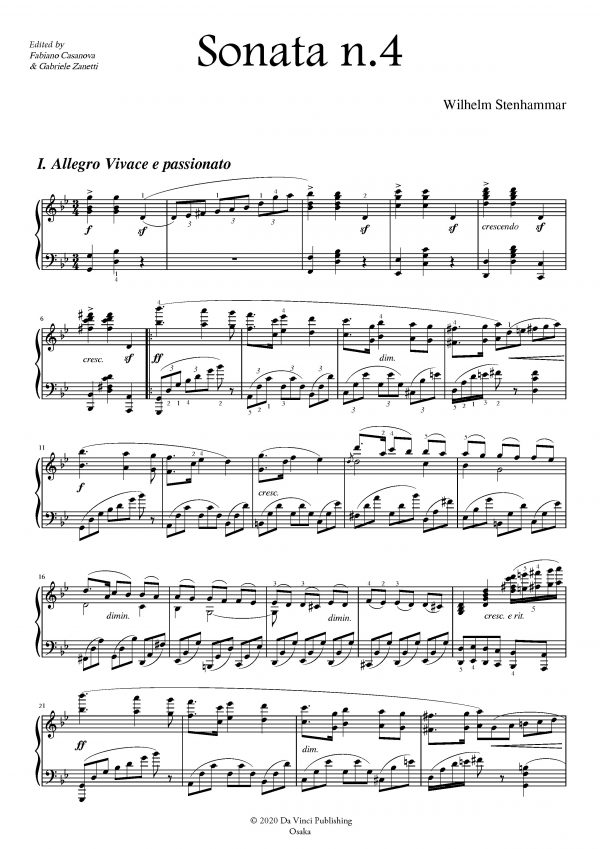 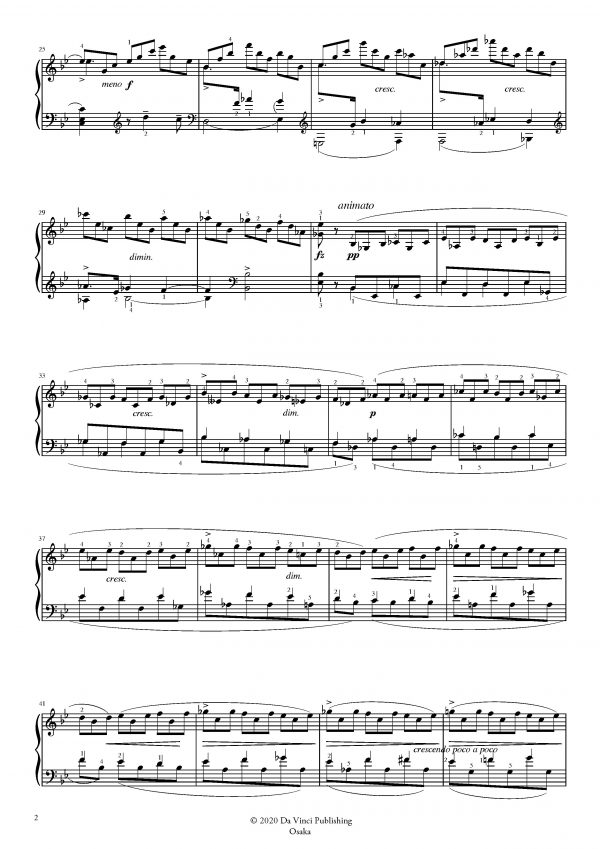 Wilhelm Stenhammar: Sonata No. 4 in G minor, for Piano

Stenhammar composed the Piano Sonata in G minor in the spring and summer of 1890. This sonata follows a traditional four-movement form that consists of: (I) Allegro Vivace e Passionato; (II) Andante quasi Adagio; (III) Scherzo and Trio; and (IV) Rondo. The approximate length of this sonata is about 25 minutes. Perhaps this could be regarded as Stenhammar’s first mature piano composition. (1) Stenhammar integrated and expanded different stylistic elements and this sonata exhibits a more sophisticated quality than in his earlier sonatas. These elements include the use of a more complex voicing, thicker chordal texture, more chromatic harmony and melodic line, and a wider scope of dynamic markings. The increase of technical demands and pianistic requirements become more evident as he developed into an excellent pianist.
This sonata seems to have strong similarities with Schumann’s Sonata in G minor, Op. 22. Perhaps Stenhammar was aware of Schumann’s sonata through his study with Andersson and later decided to model after it. The similarities between these two sonatas will be discussed later in Chapter 6. Despite the similarities, we still can find Stenhammar’s personal harmonic and melodic language in this sonata as it defines his first mature work. The author believes this to be a very effective and expressive sonata. Like the rest of his solo piano works, Stenhammar never performed this sonata again after playing it at a charity concert in May 1891. (2)

From Crystalia, Maria, “A Survey of the Piano Sonatas of Wilhelm Stenhammar (1871-1927) with Performance Suggestions for the Piano Sonata in G Minor” (2014). Graduate Theses, Dissertations, and Problem Reports. 437.
https://researchrepository.wvu.edu/etd/437

Wilhelm Stenhammar (b Stockholm, 7 Feb 1871; d Stockholm, 20 Nov 1927). Swedish composer, pianist and conductor. He grew up in a home where the arts were strongly encouraged: his father Per Ulrik Stenhammar (1828–75) was an architect and composer (a pupil of Lindblad, he wrote sacred choral works and songs in a Mendelssohnian style) and his mother a fine draughtswoman; his uncle and aunt, Oskar Fredrik and Fredrika Stenhammar, were both singers, and their daughter Elsa (Elfrida Marguerite) became a choral conductor (she published an edition of her mother’s letters, Stockholm, 1958). The Stenhammar children and their friends formed a vocal group which was highly esteemed in the upper-class circles where they entertained. Wilhelm began to compose and to play the piano as a child, without much formal training. He never went to a conservatory but passed the organists’ examination privately in 1890, after two years with Heintze and Lagergren. He did, however, attend the music school run by the eminent piano teacher Richard Andersson, and had theory lessons from Joseph Dente in 1888–9 (‘terribly boring’, according to his diary sketch of 1891) and later from Emil Sjögren and Andreas Hallén. Nevertheless, in composition and conducting he must be regarded as self-taught. Several of his early compositional efforts, such as the Tre körvisor (c1890) and some songs, still hold a place in the repertory.

Stenhammar may have considered his lack of formal instruction a handicap, for as late as 1909 he started a nine-year course of exercises, eventually covering 500 pages, based on Heinrich Bellermann’s Der Contrapunkt. It is likely that his uncertainty and self-questioning were exacerbated by his high ambitions and by his feeling that he was seeking his own way, a way not quite in accord with that of his contemporaries Peterson-Berger and Alfvén. He completed his piano studies with Heinrich Barth in Berlin (1892–3) and in spring 1902 made a remarkable triple début: he performed Brahms’s First Piano Concerto with the hovkapell; he played with the Aulin Quartet; and he had his I rosengård for solo voices, chorus and orchestra (1888–9) presented. Following this he appeared frequently as a soloist and gave around 1000 concerts with Aulin and his quartet all over Sweden.

Stenhammar’s début as a conductor had come earlier, in 1897, when he directed the first performance of his concert overture Excelsior!. He held appointments as artistic director of the Stockholm Philharmonic Society (1897–1900), of the Royal Opera for one season, of the New Philharmonic Society (1904–6) and of the newly formed Göteborg Orchestral Society (1906–22). In this last post he made the city a musical rival to Stockholm: he invited Nielsen to conduct, and he organized grand choral festivals involving large numbers of composers (notably his friend Sibelius), performers and listeners. When in 1924–5 he returned to the Royal Opera, he was already sick and physically broken.

As a composer Stenhammar began in the late Romantic style typical of Scandinavia, imbued with influences from such composers as Wagner, Liszt and Brahms. Later his work came to be dominated by a classicism of his own, based principally on a profound study of Beethoven but also on Haydn and Mozart (a fruit of his prodigious activity as a chamber musician), and on Renaissance polyphony. In his greatest compositions these traits are always tinged with a specifically Nordic colour relating to Swedish folk music, though he did not quote genuine themes to the extent that Peterson-Berger and Alfvén did. His two early music dramas, Gildet på Solhaug and Tirfing, were not successful, and though he loved the theatre and wrote a great deal of excellent incidental music, he never returned to opera. Tirfing (1897–8) provoked a crisis, causing him seriously to question Romantic aesthetics – and above all Wagner – but not entirely to reject them.

Stenhammar’s ‘second period’ found him striving for more concentrated motivic work and a deeper manner. The magnificent cantata Ett folk (1904–5) shows these tendencies in an emotive outburst of eager national feeling; the unaccompanied hymn ‘Sverige’ included in the work has become one of Stenhammar’s most appreciated choral pieces, though here the patriotic feeling is noble and intimate. A new stylistic advance came with the much played Second Piano Concerto, whose Beethovenian dialogue between soloists and orchestra, with the tonalities of D minor and C minor in contest, has a finely improvised form. The First Symphony, however, was discarded by the composer, since the work was too obviously dependent on Beethoven, Bruckner and Wagner.

Stenhammar’s third and final period may be dated from the Fifth String Quartet (1910), the first work composed after his studies in strict counterpoint. This piece lives up to its subtitle ‘Serenade’ in its vitality and humour, and comes to terms with folklorism in a masterly series of variations on the nursery rhyme Riddaren Finn Komfusenfej. Other works of the last period include two orchestral compositions which stand among the greatest in the Swedish repertory, the Serenade and the Second Symphony. The former shows Stenhammar’s ripe, deep knowledge of orchestration and has a tinge of Impressionist lightness combined with a quite Scandinavian nature poetry (there are hints of Strauss and Sibelius); it is at once the most aristocratic and most lighthearted of his larger works. The symphony, on the other hand, aims at objectivity, even asceticism, as may be exemplified by the Dorian feeling of its G minor tonality and the expert handling of fugato in the finale. At the same time it is full of allusions to Swedish folk music and, in the first and scherzo-like third movements, folkdance rhythms: it brings together all the best qualities he had so far displayed.

Outstanding among Stenhammar’s later compositions is the ‘symphonic cantata’ Sången, written for the 150th anniversary of the Swedish Royal Academy of Music. It consists of two main parts, the first seemingly recalling youthful Sturm und Drang, the second austere and slightly Handelian; these are linked by an interlude, ‘Mellanspel’, which is often performed separately. His other important vocal works include the early ballad Florez och Blanzeflor, with its brilliant orchestral accompaniment, and a large number of very finely wrought songs to poems chosen with discriminating taste. Several of these are among the most prized art songs of Sweden; the collection Visor och stämningar provides some exquisite examples, full of ingenious formal ideas. Finally, his series of six quartets was unique in Sweden at the time; they range from rather subservient Beethoven copies to an increasingly personal and assured style in the last three.

Stenhammar’s son Claes Göran Stenhammar (1897–1968) was cantor at the Storkyrkan in Stockholm and later a teacher at the conservatory. Stenhammar himself had few pupils, though Rosenberg received certain decisive influences from him and may be said to have passed these on to younger generations.