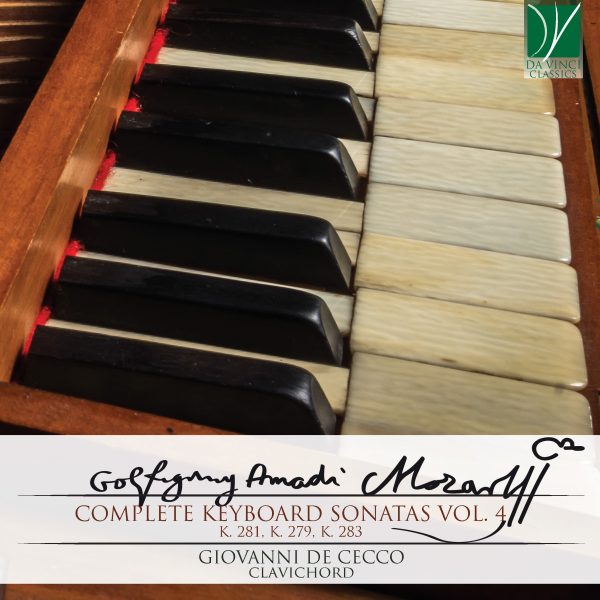 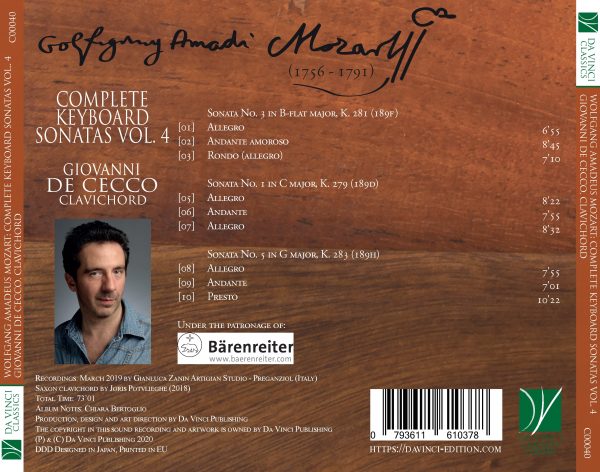 Leopold Mozart was a virtuoso violinist and pedagogue; indeed, he was one of the undisputed masters of his instrument, both as concerns its technique and the refined taste of his interpretations. Even though we cannot know how his performances actually sounded, we do know the principles on which they were grounded, since he wrote one of the fundamental eighteenth-century treatises on violin performance.

His son Wolfgang received violin lessons from him, and, unsurprisingly – in consideration both of the child’s musical gifts and of the father’s accomplishment – he achieved perfect mastery of the violin and of the viola in turn. However, it can be argued that Wolfgang, as a performer and improviser, felt “at home” particularly when playing keyboard instruments.

When Wolfgang was a child, the most common keyboard instrument for public or semipublic performances was still the harpsichord; the fortepiano gradually came to the fore, and eventually became Mozart’s favourite instrument. This predilection was grounded, however, on his earlier familiarity with the clavichord, which shares with the fortepiano a similar approach to the production of sound, since the strings are struck rather than plucked as in the case of the harpsichord. Similar to the fortepiano, the clavichord can therefore differentiate the dynamics of the sounds it produces, to a degree which is unachievable by the harpsichord; however, the clavichord is the only keyboard instrument on which it is also possible to substantially modify the sound after the strings have started to vibrate.

By changing the pression and the direction of the fingers on the keyboard, for example, the player can create a kind of vibrato sound, which highly enriches the expressive, affective and emotional potential of this instrument. The reason why such a fascinating instrument is seldom heard, today, is that the volume of the sound it can produce could not fill the size of a concert hall; the refinement of its varied nuances is unfortunately not matched by the quantity of sound it can generate.

In spite of this, it is not too far-fetched to suppose that Mozart could feel a special predilection for this instrument. In fact, if – as a performer – he felt a particular affinity for the keyboard instruments, as a composer his great love was undoubtedly opera, and the variety and flexibility of the human voice. Both by reading his letters and by studying his music, it is evident that the stage fascinated him in the highest degree, and that virtually all of his works (including the instrumental pieces) can be understood under the viewpoint of vocal (and particularly of operatic) music. Thus, the clavichord’s capability to imitate the vocal vibrato, so as to suggest a “breathing” dimension in its sound, created a musical bridge connecting the world of opera with that of the solo performance on the keyboard. When he played the clavichord, Mozart could imagine himself as the creator, the director, the conductor and the singer of his own operas.

Of course, he did write a number of operas, from his childhood until his very last years; however, his operatic output is not uniformly distributed throughout his entire life. Operas were (and still are) very expensive, and no composer (not even a genius of Mozart’s standing) can be certain of finding operatic commissions at all times.

In Mozart’s case, relatively long years happened to leave him longing for the possibility of writing and staging an opera of his own. Interestingly, it is precisely in those years that some of his finest keyboard music was written, with a twofold purpose: on the one hand, of achieving fame as a virtuoso pianist, in the hope of being noticed by those in charge of opera theatres; on the other, of fashioning piano works in which his nostalgia for the stage could be expressed.

This happens in the three keyboard Sonatas recorded in this Da Vinci Classics production. They belong to a set of six, including the first six “mature” (in spite of their composer’s age) works written by Mozart in this musical genre.

The practice of grouping similar works by sets of six was not innovative; rather, this custom was slowly nearing its end at Mozart’s time, as the qualities of originality and uniqueness in musical composition began to be increasingly prized, and musicians started to focus for a longer time on fewer works. However, there is an immediate ancestor for Mozart’s set of Sonatas, and it can be identified in Franz Joseph Haydn’s Six Keyboard Sonatas op. 13 of 1774.

Arguably, Mozart aimed at publishing his own collection as a whole, though eventually his goal was not reached during his lifetime. Notwithstanding this, the group of six sonatas did make a beautiful set, which Mozart could present and perform during his long stay in Munich, where he had been called in order to prepare the performance of his comic opera La finta giardiniera, scheduled to be staged on January 13th, 1775, at the Court Theatre.

The six sonatas had evidently been intended as a coherent whole, as demonstrated by the tonal sequence of their keys; moreover, they also display a great variety of musical styles, of technical complexity, of affections and moods, as well as a masterly balance between a respectful observance of the great models of Mozart’s time and a daring wish to create something new, fresh and original. While Mozart was not yet twenty years old, he already possessed an enviable experience both as a composer and a performer; moreover, he had closely observed a variety of national and individual styles, including the Italian idiom, the French traits, and the “German” style which actually could frequently be described as a synthesis of the preceding two. The German (and Austrian) school was best represented by Haydn himself, as well as by two of Johann Sebastian Bach’s sons – i.e. Carl Philipp Emanuel and Johann Christian – who had managed to combine some elements coming from their father’s tradition with the novelties of the current taste.

As concerns the individual works, the three Sonatas performed here exhibit some common traits, including the fantasy and the surprising features of many of their ideas, and a penchant for a cantabile style which perfectly expresses Mozart’s quest for vocal sonorities on the keyboard. The C major Sonata is probably derived from earlier drafts or sketches. The influence of vocal music is observable in the structure of the phrasing, which frequently mirrors (in both the number of notes and in their patterns of stressed/unstressed) the typical structure of the Italian verse, as found in the coeval operatic librettos. On the other hand, a noteworthy freshness of inspiration is observable here, at times resembling the style of keyboard improvisations. Of particular interest is the emphatic second movement: if Mozart’s dynamic indications cannot be taken at face-value by today’s performers (since, by the conventions of the time, they indicated texture rather than “volume”), the combination of the frequent alternations of piano and forte markings with extended ranges in the melodic leaps lends this movement a pronounced rhetorical style. The third and last movement has a clear buffo character, reminiscent of the shrewd servants of the Italian comic operas.

Characterized by an ornated style in its elaborated first movement, the B-flat major Sonata KV 281 is particularly remarkable for its slow movement, an Andante amoroso, where Mozart’s tender and expressive vein flows at its best. The typical gestures of the stile galante are transfigured into a much deeper and more intense expression; the language of Mozart’s time is bent to the composer’s inspiration, so as to recreate a miniature opera scene for performance on the keyboard.

Operatic elements are also found in the third movement, a sparkling Rondeau following a combination of Italian and French models. Its virtuoso and brilliant style is reminiscent both of the concerto and of the coloratura arias of the operatic tradition, and it even includes a small cadenza, which further reinforces its character as a “display” piece.

The G major Sonata KV 283 is a deceivingly simple work. It is relatively easy as concerns the purely mechanical aspects of performance, so that it has become a favourite of the budding pianists; however, as frequently happens with Mozart, the “easiest” bits are also among the hardest to perform satisfactorily. Its first movement is characterized by a beautifully shaped tune (its first theme), once more structured according to the rules of the Italian verse. Being tender and lyrical, with very little fireworks, it challenges composer and performer alike in their effort to create something new in the second movement. However, Mozart perfectly manages to shape an equally tender and lyrical second movement, while eschewing the risk of repeating himself.

All the brilliant and even comical elements are concentrated in the third movement, whose bouncing accompaniment in the left hand and its optimistic theme in thirds in the right hand bring the work to a triumphant and slightly ironical close.

Even when excerpted from the set of six, these three Sonatas constitute a fascinating triptych, showing Mozart’s humour, elegance, brilliancy and the touching aspect of his music. Indeed, the young composer could justly be proud of his achievement, and, by presenting himself in Munich with such a repertoire of his own works, he could be certain not to go unnoticed by those who had an ear for music.

And even though Mozart’s larger audiences were likely to hear him playing these sonatas on the harpsichord or possibly on the fortepiano, it is very possible that the first seeds of these youthful masterpieces blossomed from Mozart’s experiments on the clavichord. These Sonatas may have travelled a long way (today they are most frequently performed on modern grand pianos), but their first steps were almost certainly inspired by the sensitive keyboard of the clavichord.