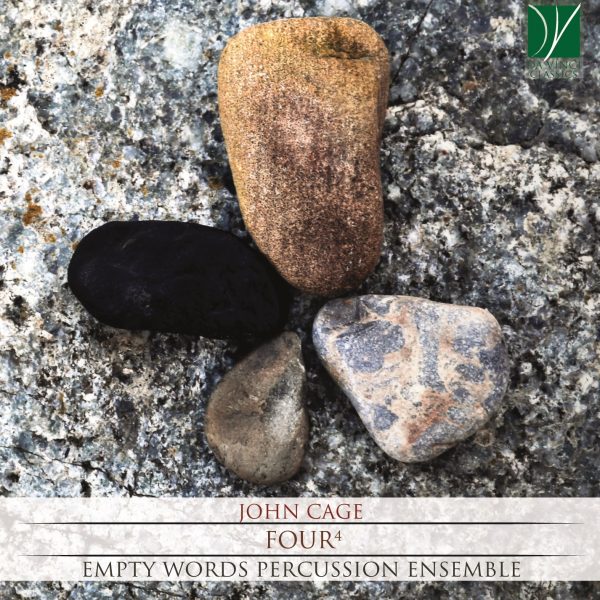 Composed in 1991, a year before his death, and premiered in New York in the hot summer of 1992, Four4 is the last composition by John Cage for percussions and it was written especially to be recorded to CD, hence its duration of 72 minutes. This is most probably the first composition ever conceived and written for the newly born support that in that period was substituting the old LP.

Written close to John Cage’s eightieth birthday, a composer, philosopher, writer and artist considered as the most eminent figure in the avant-garde music system, and surely the most purely gifted among several other composers that attempt at a various way to approach a new music concept, Four4 is part of a bigger project named “Number Pieces” which occupied Cage’s time between 1987 and 1992 and were developed thanks to a new writing software created by Andrew Culver, his long-time assistant.

This new system enabled Cage to write music very quickly to fulfil the increasing request for new original music from performers all over the world. Each work’s title consists only of a number written out as a word (One, Two, etc.) and indicates the number of performers for which the piece was composed. The titles of the composition Four4 is composed of two parts indeed, the first part related to the performers and the second, a superscript numeral, that explain the number of the series, so we can read the title as Four written for the fourth time. The “first” Four it was for string quartet (1989), the “second” Four4 is for chorus (1990), the “third” Four is for 2 piano and violin (1991) and the fourth “Four” (1991) is the composition presented in this cd. Other two “Four” (for saxophone and another for unspecified instruments) were written before his death.

Comparing this music with some of his recent past, full of virtuosity and ideas, could be for someone who is not familiar with his music a little shock. Barren sounds, almost with elemental reference, merge the late music by John Cage with the idea of an open landscape. We perceive the deep contact with our inner nature and the environment that surround us. The different pitches of every single element around that just resound in our mind. We don’t know when Nature will decide to produce its sounds, as we don’t know when the wind is coming. We found similar atmospheres in Four4 thanks to a thin out use of time brackets.

All this kind of pieces was conceived with the “time-brackets” idea indeed, a system that Cage himself explained in some mesostic, and as in other pieces of the same author, it left the choice of percussive instruments up to the performers. This choice is not a merely way to be disinterested in the results but appear to be in keeping with a kind of Zen-thought that dominates most of his production. The elements of silence, rhythms, and repetition, often used within improvisation, are nowadays reminiscent of Cage’s music. As many scholars claimed, in Four4, Cage created a meager economy of musical means for the players that they must explore thanks to the absence of choice.

The composer wittingly decided to do not to influence directly the resultant sound and left to performers and to occasion the chance to create something new each time. Even the time-brackets system appears to be in line with this choice, without forcing the performers into a rigid system and giving him liberty that would be impossible to express in other pieces.

In Four4 each beginning and each ending of sounds are separated, and each time-bracket features only one sound. The four performers have 22, 16, 10, and 15 time-brackets each; for instance, the player 1 starts his first-time bracket between 0’00 and 1’00, whereas it must end somewhere between 0’40 and 1’40. In this way, Cage can determine the total duration of the piece but not when a single performer would play inside it and it depends on performance to performance and to performer to performer decides in which way face the composition.

As time-brackets follow one-another there are several lengthy walls of silence. The choice of each one became a choice of peace, a vibrating peace among the storm, interrupted by a sound, an inner sound, in an ideal infinite turnover that reminds the breath of spirit.

Empty Words Percussion Ensemble (Percussion Ensemble), was founded and directed dy Sergio Armaroli in 2015 with Maurizio Ben Omar, presents concerts for all audiences from the novice to the contemporary music aficionado. EWPE is active in developing new works starting from the early percussion works of John Cage the aims to investigate the world of percussion in the repertoire of the twentieth century about a renewed and philological sound sensitivity; in respect of the musical text and the Idea; through improvisation and invention fed by a ‘Fluxus creative tension’ in percussion music and improvisation in the twentieth century and into the future. The members of Empty Words Percussion Ensemble –Sergio Armaroli, Maurizio Ben Omar, Andrea Dulbecco and Elio Marchesini- hold degrees in music performance from Cremona music high school, Genova and Milano Conservatory.

Sergio Armaroli: Founder of the Empty Words Percussion Ensemble. A contemporary music and improvisation specialist with significant experience in orchestral, jazz and experimental music. Armaroli combines the multiple disciplines of 21st Century percussion into a of a unity of experience he completed his studies at the Academy of Fine Arts of Brera in Milan and graduated in painting with full marks at the Conservatory “G. Verdi “in Milan, graduating in Electronic Music, Jazz and Percussion Instruments. ()

Maurizio Ben Omar: Co-founder of the Empty Words Percussion Ensemble. Graduated in percussion with full marks, studied piano and composition, too. He played in the most important orchestras in Italy and he has held concerts like soloist and in chamber music in Europe, Africa, America and Oceania with ensembles, soloist and conductor like Claudio Abbado, Mario Brunello, Bruno Canino, Giuseppe Sinopoli. Composers like Bussotti, Corghi, Donatoni, Einaudi, Sciarrino, Solbiati, have dedicate down works to him.

Andrea Dulbecco: He graduated with honours in percussion instruments under the direction of Franco Campioni at the “Giuseppe Verdi” Conservatoire of Milan, where he also studied composition and graduated in piano. He specialised in vibraphone with David Friedman. He has performed as soloist with the the Milan Orchestra of RAI (Italian National Broadcasting Company), Novosibirsk Philarmonic Society and others. He has also performed with some of the leading Italian chamber music seasons such as La Società del Quartetto, Teatro alla Scala, Accademia Chigiana and others, cooperating with top artists as M. Brunello, E. Fisk, G. Carmignola, E.Morricone, G. Sollima.

Elio Marchesini: after graduating from the Milan Conservatory with honors begins collaborations with the most important Italian musical institutions. Winner of national and international competitions can now to be known as a versatile musician, open to many musical reality from classical to avant-garde music, from pop music to ethnic music. This attitude towards sound art led him to collaborations with opera companies and symphony such as the Teatro alla Scala, the Orchestra Sinfonica G. Verdi, the Maggio Musicale Fiorentino and in chamber formations like Contemporart ensemble, the percussion Ensemble of La Scala.