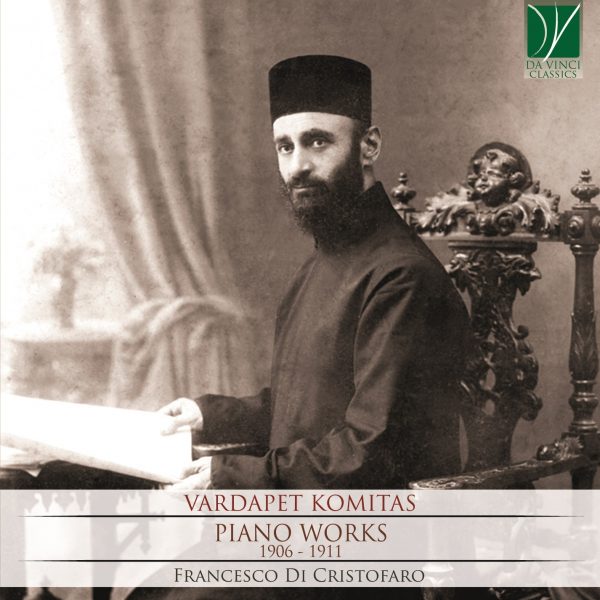 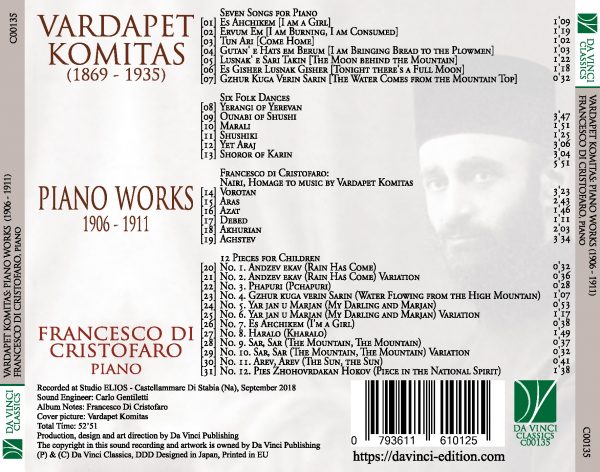 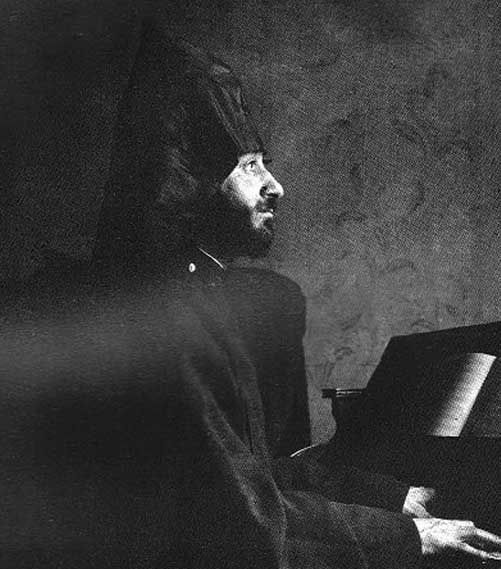 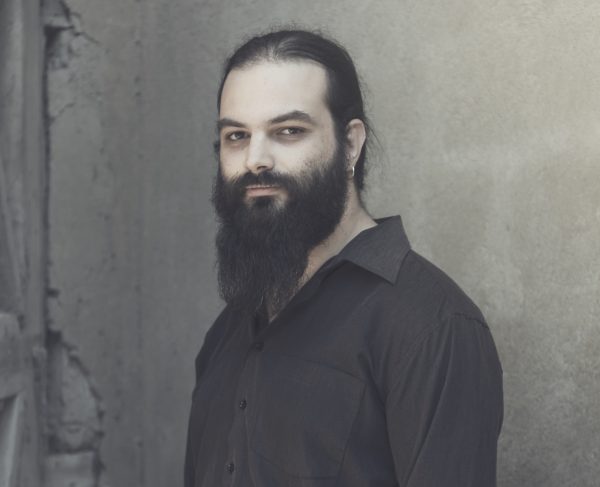 This album was born in these last years of study related to the Armenian musical tradition and from the curiosity and the need to bring to knowledge, especially to the vast Western public, the extraordinary ﬁgure of Vardapet Komitas.
Through his life, his artistic career and his immense research work not only in the Caucasian territory and especially in the re-proposed musical repertoire, Komitas, stands as a striking example of how ethnomusicological work can lead to the protection of an immense intangible and identity heritage , placing itself in this case on the terrible Genocide of the Armenian people caused by the Ottoman Empire at the beginning of the century.
One of the reasons why Komitas succeeded and reached the interest of several European musicians of his time, lies in his strong ability not so much of composer but of Rielaboratore to report and repropose on instruments of the Western tradition, in this case the piano, the musical identity of the archaic Armenian world, in a brilliant way, without virtuosity and excess, transporting and maintaining the melodic purity typical of traditional instruments such as duduk, tar and shvi and the variety and grandeur of traditional rhythmic formulas entrusted to instruments such as the dhol.
Komitas appears as a guardian of the popular tradition of Armenian music that re-elaborates and enhances the popular peasant melodies using the expressive means of contemporary musical art. This is why he is considered a great ﬁgure for the Armenian people and the father of current Armenian music

In all his piano works it is interesting to note how Vardapet Komitas has never thought and used transcriptions rich in virtuosity and technical reﬁnement typical of an instrument like the piano, leaving space instead and focusing attention on the melodic and rhythmic textures always faithful to traditional Armenian melodies.
A striking example is the “Seven songs”, composed during his lecture series in London in 1911; seven small miniatures designed for piano are small melodic windows on the Armenian musical world, managing to mount small traditional melodies with the typical rhythmic pulsations of Armenian music.
The “Six Dances”, composed and performed by Komitas in Paris in 1916, are probably his most important and articulated work written and conceived for piano. In this work he appears, ﬁrst of all, as an ethnographer, whose task is to realize the wealth of Armenian folk dances preserving, as far as possible, the rhythms and the speciﬁc timbres of some national instruments.
With his indications of the author, the composer tried to bring both the performer and the listener closer to the setting of the action, as well as the appearance and character of certain dance movements. Each dance is identiﬁed with its place of origin: Yerevan, Vagharshapat, Shushi and Karin.
The author tries to recreate through the sound and characteristics of the piano, an instrument far from the real and ancient Armenian folk tradition, some scenarios and timbres of the various Armenian instruments: for example “Het u Araj” and “Shoror” evoke the dhol (the classic Armenian percussion) and svhi (the traditional ﬂute played by shepherds); Shushiki summons the tar (stringed instrument). The last worthy of the cycle, and also the longest and most articulate, is “Shoror of Erzerum”, classiﬁed as a heroic male dance. Komitas clearly indicates that it should be performed “majestically and heroically”, as well as an imitation of the shvi and dhol, which usually accompanied that dance during folk festivals.
In the whole work, the rhythm is rich and ﬂexible, followed by the different melodies harmonized by Komitas with great taste and skill, without ever obscuring the typical identity of the traditional melodies.
Continuing with the idea of re-proposing the traditional Armenian repertorie, transcribed for piano, Komitas introduced in the “Twelve traces for children based on popular themes” some

traditional melodies collected during his years of research in an elementary form, easily understandable for young beginner musicians, following the footsteps of the pedagogical works of Bartok and Khachaturian. Completed in Poland in 1910, this set of miniatures includes several popular melodies, many of which also appear as variants. These pieces are mostly very short, in which a simple melody is presented followed by small repeated elements with small rhythmic and melodic developments. The pieces 2, 6 and 10 are any variation of the pieces that precede them. The seventh piece is based on the same song that appears as the ﬁrst of the “Seven Songs”.
Following in the footsteps of the Armenian composer, Nairi, is a tribute by the author Francesco Di Cristofaro to Komitas through 6 small movements, focusing attention on simple and rhythmic melodic plots that reﬂect the Armenian musical world with a more western perspective, almost as a spectator of the great Caucasian musical world.

Francesco Di Cristofaro start piano and accordeon studies in his early years with M°Aversano Alfonso. He obtained a diploma in Piano and Music Performance at ABRSM (Associated board of Royal school of music). During the same period, he obtained a degree in “Tradizioni Musicali Extraeuropee ad Indirizzo Indologico” (Extra-European Traditions and indian Music) at Conservatorio “A.Pedrollo” in Vicenza (Italy), by studying bansuri (Indian Flute) with M° Lorenzo Squillari and attending workshops in India and Italy with Ustad Mujtaba Hussain and Pandit Hariprasad Chaurasia.
The interest in traditional music led him to deepen various languages and instruments, he studied Iberian bagpipes with Pablo Carpintero and Alberto Jambrina; modal music at the "Labyrint" courses with Ross Daly; Armenian music and duduk with Gevorg Dabagyhan at the “ Fondazione Cini"in Venice.
At the moment he is working as poli-instrumentist in different ‘ensambles’ such as Brigan, La Deriva, Massimo Ferrante, Caterina Pontrandolfo e Os Liburia, with whom he has recorded different works and has played different live shows across Europe, such as Spain, Germany, France, Portugal, England, Switzerland, Denmark, Croatia and Slovenia.
He also collaborated with Moni Ovadia, Nino D’Angelo, Xulio
Lorenzo, E Zezi, Evi Evan, La Mescla, Roberto Giordi, Barbara Buonaiuto, Gustavoce, Alarch.

Vardapet Komitas (1869-1935) was an Armenian priest, musicologist, ethnomusicologist and composer and he is considered as the father of Armenian modern music.
Born on 29 September 1869 in Kütahya, in western Turkey with the name of Gevorgi Soghomonian, he had a diﬃcult childhood: his mother died before his ﬁrst birthday, and was raised by his grandmother while his father worked. Although he undertook elementary education, his school years were interrupted when, in 1881, his father also died. He had already begun to show signiﬁcant musical skills - he was known as the "little vagabond singer" in his hometown. He became an orphan and was enrolled in the church seminary. The lessons were conducted in Armenian, which Komitas did not speak - Turkish was his native language - but he was able to sing an Armenian anthem, even if he did not understand the words, and the quality of his voice greatly impressed the Catholicos, Gevorg IV . He quickly mastered the Armenian language and was ordained a monk in 1890. When he graduated from the seminary in 1894, he was named Komitas and shortly thereafter, he obtained the rank of Vardapet, a doctor of theology. In the seminary, Komitas studied liturgical chant and the ﬁrst Armenian notation of singing, also developing a keen interest in folk music.
After completing his studies, he went to Berlin in 1895, where he spent three years in the University Kaiser Friedrich Wilhelm (the former name of today's Humboldt University), where he studied under the guidance of Richard Schmidt until he obtained the title of Doctor of Musicology in 1899. There he was able to study singing, philosophy, aesthetics and history; and was invited to give lectures on Armenian popular music and liturgical music from the International Musical Society.
The interest in ethnomusicology led him to travel many years, recording, analyzing and collecting about three thousand melodies and folk songs from Armenians, Kurds, Turks and Persians. Traveling from village to village in search of popular folk songs, he collects them systematically, saving thousands of them from oblivion, reworking them and making them known to a wider public.
Among his works the most relevant one for the s still today one of the most employed music of the Armenian apostolic church during the mass. Komitas ranged freely between sacred repertoire and profane repertoire and this did not ﬁnd the support of the Armenian ecclesiastical hierarchy who did not see this "openness to the world”. For his work Komitas was overwhelmed by criticism from conservative circles who tried in every way to spread slander and falsehoods on his behalf making life impossible. This breakup led him to a decision that would prove tragic, the move to Constantinople in 1910. In the same year he founded a choir of three- hundred members whom he called "Gousan". Komitas and his activity that placed the Armenian people in the eyes of the world were a threat to the Turks so on April 24th 1915, when Armenian genocide started, he was arrested and deported at Çankırı, central Anatolia. Komitas, together with other eight deported, was released thanks to the help of the Turkish poet Emin Yurdakul Mehmed and the female writer Halide Edip Hanım. After being witness of the genocide and of the disruption of his ten- year work of re-composition and researches in the ﬁeld of Armenian music tradition, he suﬀered intensely from post-traumatic stress and depression; the people whose spirit he had listened to by recounting their musical expressions were led to mass extermination, the memory of which he had so scrupulously collected was destroyed. He had dedicated his life to the Armenian people, to his spirituality, to his music, but also to the splendid reality of the contact between it and the Turkish culture and vanished was also the possibility of reconciliation between them. In 1919 he was transferred to the Vil-Jouif psychiatric hospital in Paris where he spent the last years of his life until his death on 22 October 1935. His remains were returned to the Armenian people to be buried in Yerevan.
Admired by many European musicians such as Gabriel Fauré, Camille Saint-Saëns, Vincent d’Indy and above all by Claude Debussy, Komitas was a central ﬁgure for the Armenian identity, thanks to his research work that a large part of Armenian musical and cultural tradition it was not lost forever.
He is considered a martyr of the genocide.