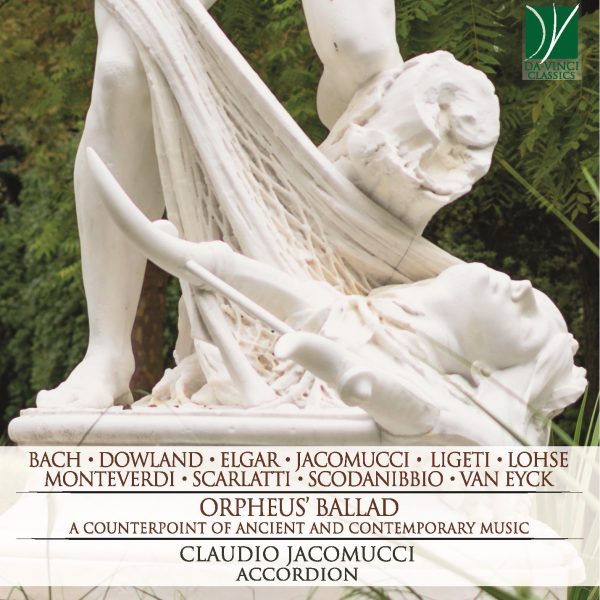 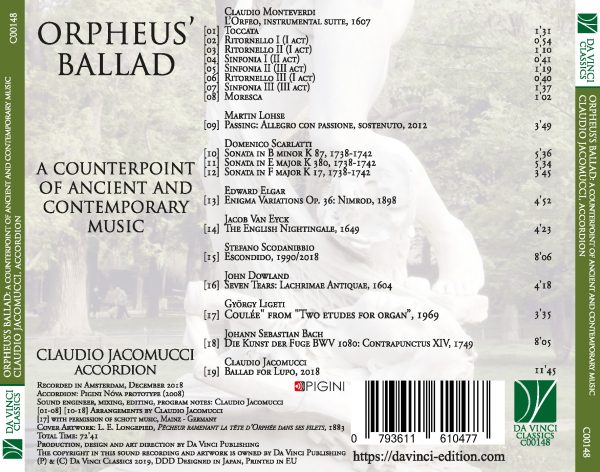 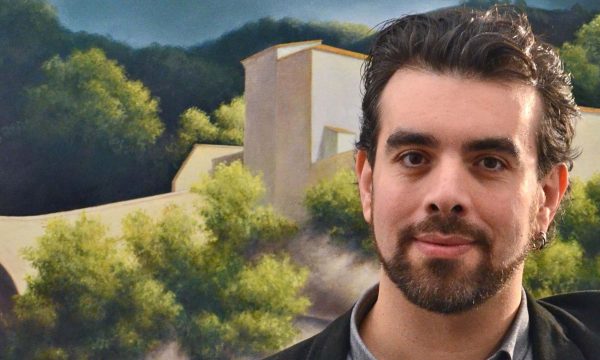 Orpheus’ Ballad: A counterpoint of ancient and contemporary music

Claudio Monteverdi:
L’Orfeo, 1607
The irrepressible force of the Toccata from the famous “favola in musica” opens the curtain to a sequence of symphonies, ritornelli and dances, the instrumental interludes of the Monteverdian operatic masterpiece., whose pieces follow each other evoking mythological passages and late-Renaissance atmospheres.

Martin Lohse:
Passing (first movement), 2012
Using simple modulations of major third chords in a sequence of quickly repeated notes and rapid modules, Passing I recreates a musical texture without dissonances. The complexity and the dynamic tension are generated by the enhancement of the polyrhythmic potential of the accordion.

Domenico Scarlatti:
Three Sonatas, 1738-1742
Domenico Scarlatti was without doubt the most original keyboard composer of his time, he wrote 555 sonatas for the harpichord. These three Sonata are presented in a refined accordion transcription that provides them color and vitality. In the Sonata in B minor K 87 it magnifies the expressive melodiousness of four-part contrapuntal polyphony. Drums are heard, accompanied by trumpets, in the very fanfare-like Sonata in E major K. 380. We hear in this sonata an echo, in miniature, of the music of court ritual that must have been part of the everyday life of Scarlatti’s patron, employer and pupil, the Princess Maria Barbara of Portugal and Spain. While in the brilliant Sonata No. 17 in F major shows a strongly reminiscent of Spanish dances and the accordion amplifies the rhythmic excursions.

Edward Elgar:
Nimrod (from enigma Variations op.36). 1898
Enigma Variations is a collection of musical caricatures of Elgar’s friends. This lyrical movement portrays a warm conversation between the composer and his friend August Johannes Jaeger. The name of Variation No. 9, Nimrod, is a play on words, as the biblical “Nimrod” was a great hunter, and the German word meaning “hunter” is Jaeger. All the works are composed using camouflaged motifs by Mozart and Beethoven.

John Dowland:
Lachrimae Antiquae (from “Seven Tears), 1604
Throughout the XVII Century, the melody of Lachrimae Antiquae – also known as “Flow my tears” – has traveled Europe becoming among the best known songs of the time.
This piece has been transcribed from the 5-parts score, where the accordion recalls the sounds of the harmonium and the viola da gamba’s expressiveness.

Jacob Van Eyck:
The English Nightingale, 1649
The English Nightingale, a well-known piece for solo flute from the XVII Century Flemish school is transposed to the accordion, which can be seen as nothing more than a “wind keyboard”, in this sense kindred to the flute.
In this naturalistic page, the melodic virtuosities reproduce chirps, trills and ornaments that have influenced the European instrumental music of the Baroque Era.

Stefano Scodanibbio:
Escondido, 1990
A contemporary dissonant texture of chromatic intervals and sharp sounds reveals a more archaic structure, conceived in an exotic mode, nurished by Indian and African influences. The piece, originally written for violin and violoncello has been transcribed and arranged for accordion by Claudio Jacomucci.

Johann Sebastian Bach:
Contrapunctus XIV, 1749
(from die kunst der fuge bwv 1080)
A three-subject fugue suddenly stops… It is the last unfinished counterpoint of Die Kunst der Fuge. The last page of the manuscript of the XIV contrapunctus, bears the words “during the writing of this fugue the composer died”. Although this is unlikely, since J.S. Bach was almost completely blind in the last year of his life, the Art of Fugue is recognized as one of the most complex works ever written and is universally considered one of the highest vertices ever achieved by contrapuntal polyphony in the whole history of music.

György Ligeti:
Coulée
from Two etudes for organ, 1969
The repetition at great speed, of trills, tremoli and arpeggios, generate a dense and saturated texture of movement inside. Like the “Op art”, this technique creates an illusion for the listener to perceive, instead of a mass of static sound, the atomic swarm of the sound material, a mass of sound. The version of the second study for organ, is proposed here in a transcription for two accordions. © With permission of SCHOTT MUSIC, Mainz-Germany.

Claudio Jacomucci:
Ballad for Lupo, 2018
It is a tribute to a dear friend who was with my family for fourteen years. As an attentive and patient listener, he was almost always present during the long hours of study, rehearsals, recordings, lessons. A cosmopolitan, he loved to travel, venturing alone in the cities, climbing the mountains, losing himself in the woods, repeatedly risking his Life. He always lived in freedom, despite warnings, risks, dangers, sanctions. In 2016, Lupo -italian word for Wolf -, a small black and white dog, ironically, was killed by a real wolf on the hills of Urbino, Italy.

Claudio Monteverdi: (b Cremona, 15 May 1567; d Venice, 29 Nov 1643). Italian composer. The most important musician in late 16th- and early 17th-century Italy, he excelled in nearly all the major genres of the period. His nine books of madrigals consolidated the achievement of the late Renaissance masters and cultivated new aesthetic and stylistic paradigms for the musical Baroque. In his operas for Mantua and Venice he took the experiments of the Florentines and developed powerful ways of expressing and structuring musical drama. His three major collections of liturgical and devotional music transcend the merely functional, exploiting a rich panoply of text-expressive and contrapuntal-structural techniques. Although he composed little or no independent instrumental music, his writing for instruments was genuinely innovative. Schrade’s famous assessment (1950) of Monteverdi as ‘creator of modern music’ may be exaggerated, but his significant place in music history is assured

Jacob van Eyck (b ?Heusden, nr 's-Hertogenbosch, 1589/90; d Utrecht, 26 March 1657). Dutch carillonneur, bell expert, recorder player and composer. He inherited the noble title of ‘joncker’, and was blind. He spent his early years in Heusden, and in 1623 visited Utrecht, where he was appointed carillonneur of the Domkerk in 1625. Three years later he became director of the Utrecht bellworks, having technical supervision of all the parish-church bells. Later he also became carillonneur of the Janskerk, the Jacobikerk and the city hall. It was he who discovered the connection between a bell's shape and its overtone structure, which enabled bells to be tuned properly. In this he had the cooperation of the famous bellfounders François and Pieter Hemony. His work gained the attention of such prominent intellectuals as Isaac Beeckman (1588–1637), René Descartes and Constantijn Huygens (a distant relative, and dedicatee of van Eyck's Der Fluyten Lust-hof). He was charged with carillon improvements all over the northern Netherlands and had several pupils.

In 1649 his salary at the Janskerk was increased, ‘provided that he would now and then in the evening entertain the people strolling in the churchyard with the sound of his little flute’, a practice that was first mentioned in a poem of 1640. His two-volume Der Fluyten Lust-hof, which was reprinted several times, contains almost 150 pieces for solo soprano recorder in C. The original prints contain many errors, mainly due to van Eyck's blindness. A few of the pieces are free compositions (preludes and fantasias), but the majority consist of variations on melodies popular at the time. Although most of these melodies have Dutch titles, many originate from the French air de cour repertory, and some are Italian (from Giulio Caccini, Gastoldi), English (Dowland), German and Dutch; 16 were borrowed from the Genevan Psalter. The process of composing variations was called ‘breecken’ (breaking): the notes of a theme were broken into notes of smaller values, each reprise becoming increasingly elaborate. Although van Eyck's ornamental style shows many features of Italian improvised passaggi, his pieces are to be considered as true compositions. Der Fluyten Lust-hof, i (1649) includes five duets that make use of some of the monophonic variations; these arrangements are not by van Eyck and can be attributed to his publisher Paulus Matthysz.

John Dowland (b ?London, 1563; bur. London, 20 Feb 1626). English composer and lutenist. He was one of the finest players of his time, and while his music was soon superseded in England, it had a profound influence on the Continent, where he spent much of his career. He is now recognized as the greatest English composer of lute music and lute songs.