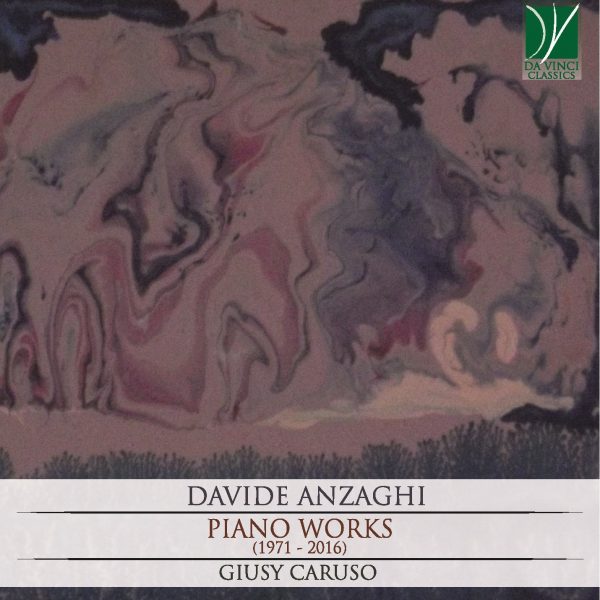 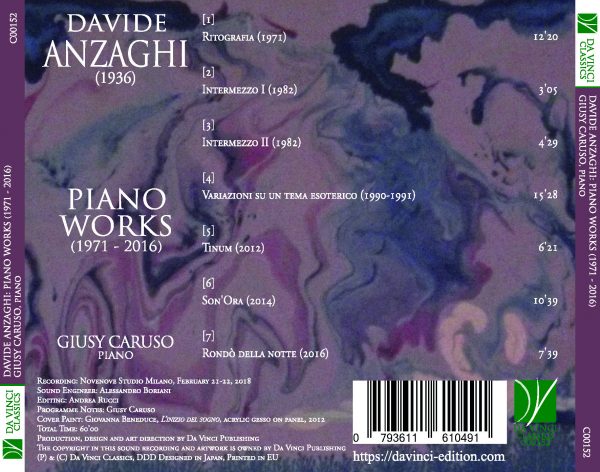 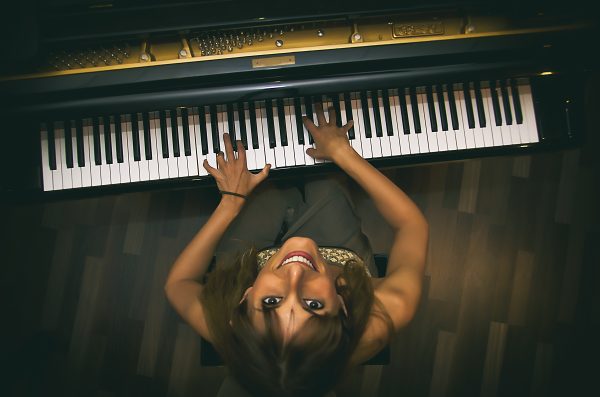 RITOGRAFIA (1971) proposes a series of musical sketches alien from any predetermination. The episode-theme is based on a moto perpetuo in the higher-middle register of the piano, which progressively evolves towards synchronies initially consisting of two simultaneous sounds that ultimately become three, four, five or more agglomerations of sounds. The complex harmonic structures of these clusters create an ecstatic atmosphere. The form is indeterminate, and each graphic “sign” does not correspond to a specific sound but wants to evoke unexplored acoustic worlds. The title, Ritografia, precisely attests its procedure as illustrated.

DUE INTERMEZZI (1982) are two intimate pieces written as a farewell from the author’s previous compositional phase, called euphonic. They bear witness to the development and conclusion of an artistic line, which leads to the original Pythagorean Code. On using this code, Anzaghi extends with a sequence of intervals the augmentation and diminution, generally applied only to the duration of the sound. Intermezzo I presents a warm and modest cantabile with a few notes, in the low register of the piano, providing the only impetus to the quite melodic lines of this composition. The phrases are imbued with constellations of sounds in the higher register and this confers a brilliant resonance to the entire piece.
Intermezzo II reveals a subtle nostalgia, a romantic “spleen”- memory of the latest Intermezzi by J. Brahms. The prevailing register is no longer the higher one (alluding to a carillon) but rather all the wider pitches of the keyboard. Expressive arabesques draw fluctuating and intense emotional emersions.

VARIAZIONI SU UN TEMA ESOTERICO (1990-1991) remained for a long time to be processed. This piece starts with a moto perpetuo in the form of toccata style, where the octaves in sforzando create a subtle and suggestive theme becoming the material source for the Variations in the different episodes with an elaboration on character, rhythmical structure and timbre. The author gives the impression to pursue an endless intellectual idea of variation by multiple interventions which arouse an atmosphere of continuous suspension up to the last note.

TINUM (2012). The author asserts that this piece found its meaning in the French assumption “en attendant le néant”, i.e. waiting for nothingness, the metaphor of the metaphysical nothingness. This composition is structured on short phrases interspersed by silences. These passages seem to interrogate silence without response. Therefore, the dialogue is transformed into a monologue. Tinum requires a virtuoso technique and a refined rhetoric and expressiveness.

SON’ORA (2014), the author continues the same intense drama of Tinum. The recourse of silences, interrupted by short phrases, alludes again to repeated questions in absence of answers.
Dedicated to the pianist Giusy Caruso, this piece includes the use of small percussive instruments, to be played by the same pianist, which generate a variety of timbres and enrich the piano sound effect.

RONDO’ DELLA NOTTE (2016) is one of the latest composition for piano where the author re-evaluates the primacy of sound and not of the graphic “sign”. The predominance of the listening aspect reveals a specific tendency that emphasizes how the era of the score, as an exhibited graphic artwork, has unquestionably ended. The title alludes to the classic form of Rondò where the invention is oriented by following the Pythagorean Code (systematically used by the author since 1984). The minimalistic melodic lines in the higher register of the piano evoke the sound of a carillon that resonates together with the touches of a Crotalus and a bell (both played by the pianist) to announce the aura of a nameless, timeless and endless night.

The music critique Andrea Bedetti defined Giusy Caruso “one of the most interesting Italian interpreter...able to dive into any contemporary musical shapes by identifying herself with a disarming simplicity. Her performance often turns into a contemplative act.”A concert pianist and artist-researcher, Dr. Caruso has captured the attention of the music world since an early age. After graduating in piano with full honors, she won the prize World Music International (Rome 1998) for best graduates from the Italian conservatories and she continued collecting awards ever since. In 2009, her interpretation of the Huit Préludes by Olivier Messiaen received the “Special Mention” as best performance in contemporary music at the prestigious International Ibla Grand Prize. Dr. Caruso is carrying out her concert activity throughout Europe, Asia, Russia and Argentina by playing for important music Festivals. The world music critiques praise her refined musicality, her charismatic stage presence and bright piano technique. Dr. Caruso published CDs on Franz Liszt (SIPARIO DISCHI), which received the Golden Label by the Belgian music critique; on the Italian composers Giacinto Scelsi, Biagio Putignano, Davide Anzaghi (TACTUS) and the entire 72 Etudes Karnatiques by the French composer Jacques Charpentier (CENTAUR RECORDS), both of which received five stars for their artistic quality. Dr. Caruso graduated cum laude in Philosophy from the University of Calabria and in Piano Performance from the Italian Conservatory and from the Conservatory of Rotterdam, where she brilliantly achieved her Master's Degree in Piano Performance. From the Royal Conservatory of Ghent she obtained with the highest distinction her Post-Master’s Degree in Contemporary Music. As an artist-researcher, she completed her doctoral degree in Arts (contemporary piano performance) at the University and Royal Conservatory of Ghent, where she is currently carrying on her postdoc research on the innovative approaches to music performance analysis.

Son of the musician Luigi Oreste, Davide Anzaghi started his musical career as a very young performer in 1950 and since 1952 he won a number of international competitions feeling at an early age his vocation for composition. At the beginning of the 1970s, Anzaghi renewed his concept of writing music, and in 1972, he was proclaimed the winner of the National Composition Competition of Treviso by a jury presided over by G. F. Malipiero. In 1974, he was the winner of the International Composition Competition Olivier Messiaen proclaimed by a board consisting of G. Ligeti, Ton de Leeuw, W. Lutoslwski, and I. Xenakis and presided by O. Messiaen himself. Anzaghi's adherence to the poetics of the late twentieth century was not ideological: in his compositions, the author did not cease to believe in the emotional and aesthetic components of musical language instead of musical experiments and sterile creations. The author's orientation is evidenced by the motto "The denial of communication is solved in the communication of negation." Anzaghi's music originates from being a composer by vocation and not by volition. His new CD shows significant results in Anzaghi’s piano solo composition. This CD offers a meditated anthology of the compositional itinerary of the Milanese author whose music aspires to be loved before being evaluated.