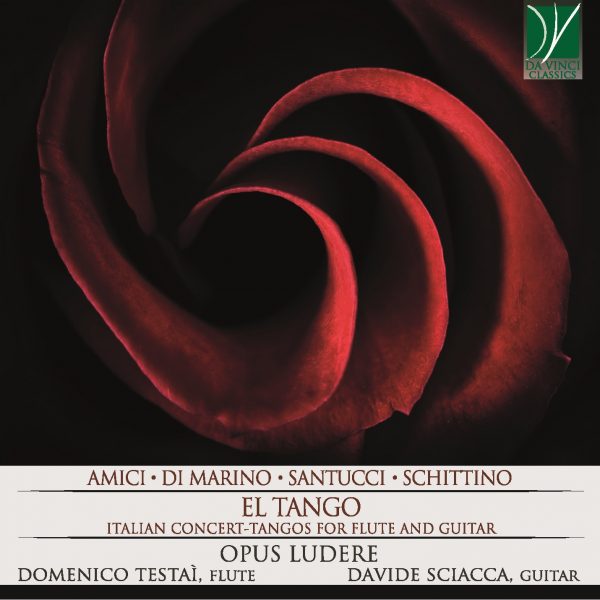 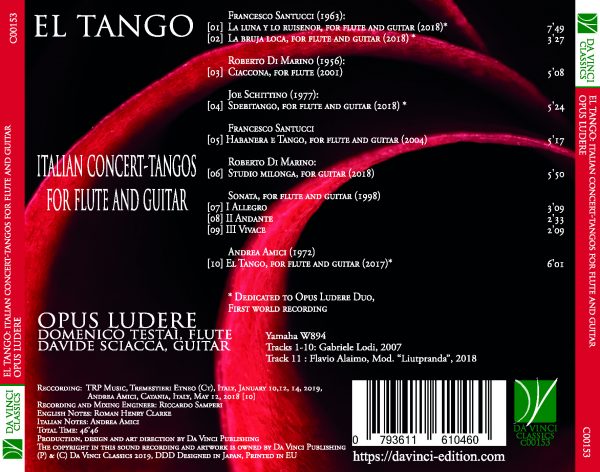 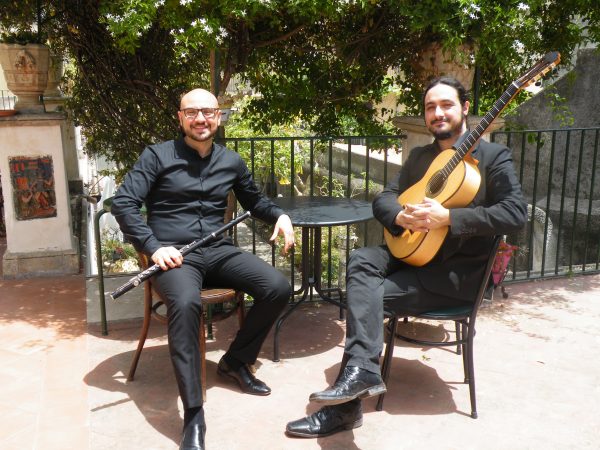 Tango is a musical genre. This statement seems almost revolutionary in an era in which that word evokes passionate movements, Argentine and Uruguayans suburban landscapes, but tends to neglect what this dance finds life from: the music. And therefore almost a blasphemous act will appear the proposal of a concert tango record, written by contemporary composers. Going deeper, will kick up a fuss the fact that the musicians in the record are Sicilians, one of whom has built the most of his career in Great Britain. Let’s say that even the composers are all Italians, and the Sunday tanguero will be taken down by tears of madness. But let’s go step by step.
El Tango, this is the name of the CD, is a project that comes from the stage. Born from the precise intent of two performers of rare talent, Domenico Testaì and Davide Sciacca, to give new life to a genre more and more stranded to the role of repetitive accompaniment of dance classes by the views of conformist ‘fans’, only able to accept at the most the latest innovative flashes of this genre, the electronic ones, which have now passed the double decade of life. Given the moniker of ‘Opus Ludere’ (the effort of entertainment), Testaì and Sciacca decided to bring back to the fore the listening and the contemporary essence of tango, untying it from the gymnastic and geographical aspects. And they do it by drawing on the works of excellent authors, and with their support. Starting from the Roman, and Sicilian by adoption, Andrea Amici, whose work, El Tango precisely, gives the name to the record, part of the exquisite catalogue of a deep and conscious author, able to delineate a deep socio-musicological analysis. Cosmopolitan composer, Sicilian by birth but famous and very celebrated globally (starting from Germany, the motherland of so many composers), Joe Schittino joins the panel, with a tough but greatly enjoyable ‘Sdebitango’, which witnesses the astounding talent of this artist.
Follows in the list Francesco Santucci, author of soundtracks and saxophonist of the RAI (the Italian state broadcaster) orchestra, some of whose works were premièred by Opus Ludere.
And finally, Roberto Di Marino, born in Trentino and teacher at the Verona Conservatory, author of as much elaborate as fascinating ageless music.
The result is emotion: with an open approach, ‘El Tango’ is enjoyable both by the occasional user and by the lover of art music. Nearly a ‘work by levels of awareness’, in which each listener, and for each person at every new passage, may grab something new.
New, unreleased, unheard are the keywords of the CD: all ‘new music’, no ‘revisited’ or revived ‘classics’, with four compositions, by Amici, Santucci and Schittino, specifically composed and dedicated to the Opus Ludere duo. The whole efforts rendering the whole justice to that contemporary music which in Italy, home of great composers in every era too, seems to be condemned to the relegation of a niche genre, with the only exception of those very few names who have risen to mass popularity. El Tango, and with it Opus Ludere, is therefore projected to a broad scenario, both from a geographical point of view and from that of potential listeners. But don’t fall into the trap of believing it a didactic or popular project: the elements, and the difficulties, of the great contemporary music are all there, to the full enjoyment of the attentive and well-trained listener. But, and it’s a merit, without that certain self-referencing of those composers who have become originally trendy just for being ‘difficult to listen’, first among all those who ignored (and maybe still ignore) that the ‘classical’ music has continued to exist and proliferate. And of the marvellous journey of art music this CD represents an appreciable episode, which deserves every fortune. So
sit, relax, listen, and enjoy the music.

Davide Sciacca, Sicilian guitarist, has been a student of the concert artist Carlo Ambrosio. He obtained a Diploma with Honours in Guitar, followed by an additional second level Academic Diplomas in Chamber Music, Teaching and Performance. In 2016 he obtained a second level Masters in Contemporary Music from Santa Cecilia Conservatoire in Rome studying with Arturo Tallini. Davide won more than fifty 1st prizes in international musical competitions. Over the years composers Andrea Amici, Laurent Boutros, Roberto Cipollina, Francesco Santucci, Domenico Scaminante, Andrea Schiavo, Joe Schittino and Giuseppe Torrisi have dedicated him original compositions. Davide’s performances have included his solo guitar concerts as well as appearances with chamber music groups, and as a soloist with orchestras in a variety of venues including theatres, cultural centres, universities and churches and cathedrals. He has also performed at the Tuscia International Guitar Festival and with the Ersu Orchestra from his home town of Catania. He regularly lectures at universities in the UK and Italy. From 2014 Davide Sciacca toured England, Scotland and Wales as both a soloist and as part of a duo with violinist Marianatalia Ruscica, playing at prestigious venues. In the years 2016 and 2017 he performed in the presence of Her Majesty The Queen, His Royal Highness The Duke of Edinburgh, HRH The Prince of Wales, HRH The Duke and The Duchess of Cambridge and other members of the Royal Family. In 2018 Davide made his debut in the United States performing for Culture Connection in New York City. After, he performed for the Ealing Guitar Society in London and the Liverpool Guitar Society. At the end of the same year he released, as part of the Counter Irish Project, a CD based on Irish traditional music, arranged in a classical and modern way. He has collaborated with actors and directors such as Michele Placido, Guia Jelo and Ornella Giusto. Davide’s repertoire isn’t confined to classical music, and he has appeared with rock and pop musicians at festivals and events including Sanremo Rock, Star Sprint, Time Tour and Girofestival, as well as working as session musician. His media appearances include work for Sky, Made in Liverpool Tv, Tele D, Rei TV, Globus Television, and BBC Radio Merseyside.

Domenico Testaì: He began his studies at the music high school, where he brilliantly graduated in 2002. In 2009 he qualified for teaching and later specialized in musical disciplines in the interpretative branch. He was eligible for the Maggio Musicale Fiorentino academy, the Orchestra Giovanile Italiana, the "Progetto Palcoscenico" in Pescara and, through national contest, for the Italian State Police musical band. He took part in masterclasses with renowned Flute players, including Vella, Persichilli, Marasco, Fromanger, Mazzanti, Montafia, Formisano, Oliva, Taballione and Manco and chamber musicians and directors such as Berman, Sciarretta, Manuli, Filippini, Bolgiagli and Vinciguerra. He hold several chamber music performances, ranging from duo to quintet, in various formations, over 20 as a soloist with orchestras and chamber orchestras. He also carries out both symphonic and lyric orchestral activities and has participated to live CD and DVD recordings including the live concert of the KV314 concert by W. A. Mozart.
Winner of numerous chamber and solo music competitions, he has collaborated with the E.A.R. “Vittorio Emanuele" in Messina, the Stesikoros orchestra, the “Filarmonica Belliniana”, the “Kore” University of Enna, the “OSN” of Mascalucia, the “Euromediterranea” orchestra and the "Jupiter" orchestra of Meda (Milan).
He has played in several Operas, such as Tosca, Traviata, Norma, Cavalleria Rusticana, Pagliacci, Barbiere di Siviglia, Aida and L'elisir d'amore as first flute.
He has played in several theatres in his home town, Catania, including the “Piccolo” and “Massimo V. Bellini”. Furthermore, he has played in the military band of the Aosta Brigade (Sicily). He teaches flute at the I. C. “V. da Feltre” where he directs the school's orchestra and arranges the scores.