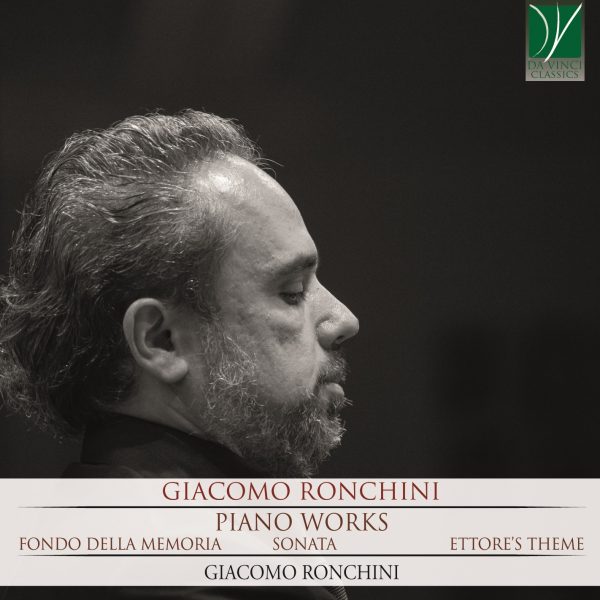 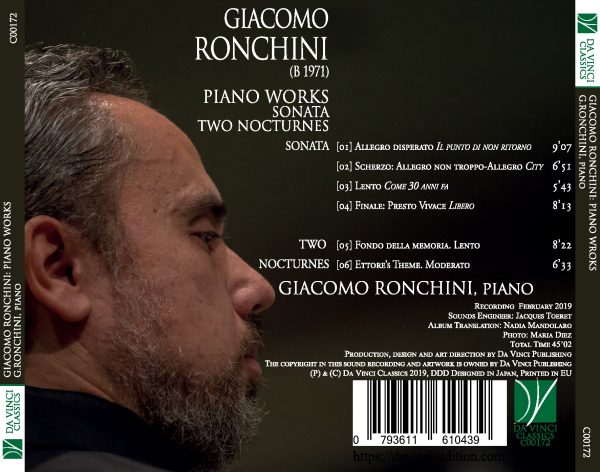 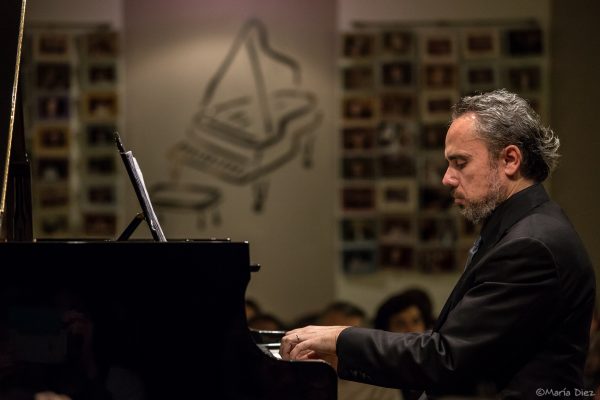 The European classical musical culture, as store of experiences opened to a contamination of modern, cultural and popular styles, is the imprinting of the composing styles of Giacomo Ronchini (Milan, 1971) that someone would define cross-over. It’s certain that the mastery and the personality with which the pianist composer manages the harmonic and tonal material gives us the possibility to appreciate his consciousness to search in this material, finding new expressive solutions.
The Piano Sonata was composed between 2017 and 2018. It takes form unexpectedly from the draft of what constitutes now the Third movement, born as natural continuation of the series of minimalist musical pieces of the three previous collections for the piano, Self-portrait, Forse un giorno, So slow so long, published between 2015-2016. During the drafting, the other three compositions were born, which, for their characteristics, were able to face a wider form and to live together in a unique musical thought. In the First movement, the three basic sections of the Sonata-form present some particular characteristics, maintaining the traditional structure : the First Theme has the features of the typical instability of a transition, but it arrives to develop in spite of the continuous harmonic but tangled passages, in the same tonal field, where it is born from, appropriating a thematic identity and expressing the cage of the upset thoughts that Allegro disperato faces.
The second idea of the First Theme, just mentioned, lightens again without limits to flow into the Second Theme. Here, even maintaining the severity of the initial tactus, exactly halved in comparison with the First Theme, you can arrive with a very strong agogic contrast and suddenly the character becomes mild and reflective.
The new atmosphere, violently broken down with the unexpected attack of Development, built on three new readings of the cycle of harmonies of the Theme but with the managing of two thematic contrasting lines from the rhythmical point of view : the syncopated bass and the continuum of the central/acute part that renew exponentially the previous, ostinated and obsessive character. Only unexpected dashes, quite romantic thematic fragments break the perpetuum of the counterpoint.
The interpreter, besides facing a staccato particularly insidious in the bass, played by the left hand thanks to the force and required agility, is called to control particularly the coordination, given to the superimposition of thematic lines as different as asymmetric.
The last descending turmoil of the harmonies that are put one on the top of the other on an instable D flat of initial pitch (C minor), finds its rein, even on a long reflection of the previous harmony, coming back to the Second Theme in C major, a real variation in triplets of the first version. It ends with a rapid final in which two violent chords of octave and quarte placed one upon the other mark the Point of not return. But immediately, in a typical , antidialectic concept of Brahms in which to a force that seems to have found its natural extinction is joined another of the same energy, comes the Scherzo in G minor with an insistent rhythm in 6/8 and with a fierce, mysterious and explosive character at the same time. The space for the intimate lyricism arrives to emerge in the Trio in E flat maj, where from the night lights of the City comes a waltz, imagined on the last notes of the Scherzo. The Third movement, with its evoking the adolescence purity of an Existing as 30 years ago, marks the alter ego of what has been narrated till now: the shyness of a theme just mentioned and emerged from nothing takes form to become a continuous crescendo, longing for affirming a life stifled for a long time, but still and more ever alive. So, with a new and irrepressible push, the Finale (Free), a combination of rhythm and singing, in form of Rondò, comes. The pianistic technique finds here new solutions of agility of chords and is played on an irregular meter, expressed also by the lack of the bass in the beat and based on a singing, persuasive theme, that is constantly in evolution. After the meditative central part, built on the precision and the sense of the time that flows and able to grow gradually from the most remote of the spaces to its climax, a sudden and quick rising progression takes to the revival to find in the evoking of the incipit of the Second movement, its natural conclusive outburst. The Two Nocturnes are two meditative compositions that reflect the favourite form of the Song and of the Variation. The simplicity of the form is transformed in a new framework, finely complex, becoming an instrument of introspection that seems able to read from the musical point of view an experience in its slightest shades. Fondo della memoria (2018) is a tribute to his father and his collection of Poems recently published, while Ettore’s Theme (2019) is the development of a thematic fragment listened in introduction to the piece.

Giacomo Ronchini: Graduated summa cum laude at the Conservatory G. Verdi in Milan, he improved his knwoledge with B. Petrushanskij and the Trio di Trieste.
He made his debut at the age of thirteen with Mozart’s Concerto K 414 under the direction of D. Gatti and, after the auditions of the RAI Orchestra and Pom. Mus., he performed Mozart, Schumann, Liszt and Rachmaninoff’s Concertos. He attended, very young, the Stauffer String Academy in Cremona giving the light to many chamber-music groups, that came into the public eye of the most prestigious concert seasons in Italy and abroad: Milan (Verdi Hall, S. Maria delle Grazie, LaVerdi), Turin (Lingotto), Palermo (Politeama), Rome (Gonfalone), Trieste (Rossetti, Revoltella), Asolo (Int. Festival), Città di Castello (Fest. delle Nazioni), Jesi (Pergolesi Th.), Treviso (T. Comunale), Amalfi (Int. Pianistic Fest.), Siena (Chigiana Acad), Genua (P. Ducale), Gorizia (Auditorium), Codroipo (Villa Manin), Busseto (Sala Barezzi), Modena (T. Comunale), Lecco (Music Festival), Brescia (Fond. Romanini), Savona (Chiabrera Theatre), Carpi (T. Comunale), Bergamo (Sala Piatti), Lipari (Greek Th.), Novara (Conservatory), Blonay, La-Chaux-de-Fonds, Amsterdam (Keizersgrachtkerk), Liège (M. Wallonne), Leòn (Eutherpe F.), Kiev (Lignea Hall), London (Purcell Room). Some of his latest prizes include the invitation by the Philarm. Orch. at the Royal Festival Hall in London, an honorable mention from the Ac. Chigiana and the “Nuove Carriere” CIDIM-Unesco. His album “Mozart in Paris” was chosen by Radio 3 among the most interesting in 2012. His two albums dedicated to bossa nova, Andorinha and Stones and Flowers, seal an interesting union with the Brazilian musician A. C. Jobim. After the publication in 2015 of the album Self-portrait, that marks his creative turning point, follows Forse un giorno (2015) and then So slow so long (2016).
Since 2014 he is the protagonist, with these projects, of recitals that represent a moment of particular attraction in classical and jazz sesaons.

Giacomo Ronchini started his studies at the “Verdi” Conservatoire in Milan receiving the highest marks with honours. When only thirteen he had his debut with Mozart’s concerto K414 under the baton of Daniele Gatti winning in the next years auditions with the RAI orchestra and “Pomeriggi musicali” with whom he performed Mozart, Schumann, Liszt and Rachmaninoff concertos. From a very early age his love for chamber music brings him to the Cremona string academy where he forms various partnerships, from duo to quartet, which are launched in the most prestigious seasons and halls in Italy and abroad: Milan (Verdi hall), Turin (Salone della Musica in live on radio), Palermo (Politeama), Rome (Gonfalone), Trieste (Rossetti Theatre, Museo Revoltella), Asolo (Festival Internazionale), Città di Castello (Festival delle Nazioni), Jesi (Pergolesi Theatre), Treviso (Teatro Comunale), Amalfi (Festival pianistico Internazionale), Siena (Accademia Chigiana), Genua (Palazzo Ducale), Gorizia (Auditorium della Cultura Friulana), Codroipo (Villa Manin), Busseto (Sala Barezzi), Modena (Teatro Comunale), Lecco (Music Festival), Brescia (Fondazione Romanini), Savona (Teatro Chiabrera), Carpi (Teatro Comunale), Bergamo (Sala Piatti), Lipari (Teatro greco), Blonay for the “journées Paul Hindemith”; Amsterdam (Keizersgrachtkerk), Kiev (Lignea hall), London (Royal Festival Hall, Purcell Room). Some of his latest prizes include an Honorable mention from the Accademia Chigiana in Siena and the “Nuove Carriere” organized by CIDIM-Unesco. His love for music and his skills as an arranger led him to new projects on Jobim. His album “Mozart in Paris” and two records dedicated to Tom Jobim were chosen by RAI Radio 3 among the most interesting in 2012 and 2013. Casa Musicale Eco in Monza, which is also editing some of his educational works, has published three volumes entitled “L’orchestra fa scuola”; transcriptions and arrangements for orchestra of the most beautiful classical compositions dedicated to children in the first years of study. From the Jobim’s project explodes a new musical adventure: the release in 2015 of the album “Selfportrait” marks the creativity of the musician that develops generously giving birth, at short distance, to the second album “Forse un giorno”.