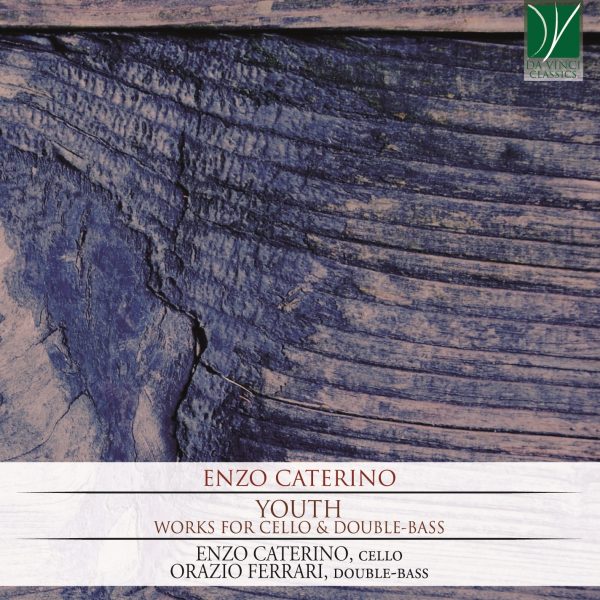 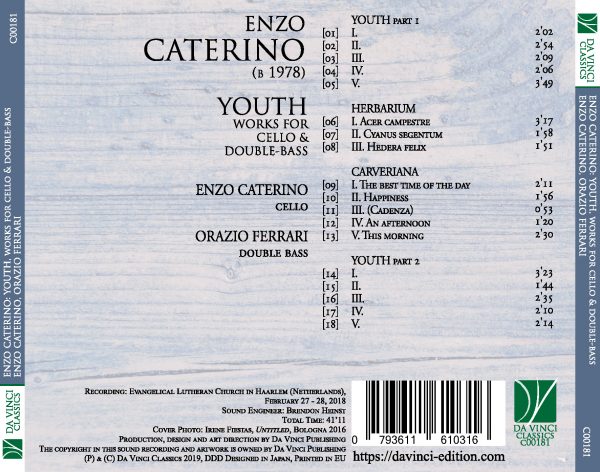 YOUTH is an album featuring a collection of memories, pictures and moods that have to be shared. It was relevant for me to find the right combination of colours and certain chemistry in the sound. I wanted a warm, silky, melodic, and powerful sound. Therefore, I went for the cello and double-bass, but what I had in mind was not a classic, canonical bass sound. That was how I decided to involve Orazio in this project. Orazio can play the double-bass and obtain a characteristic and cello-like sound; he has a unique way of playing this amazing instrument, which inspired lots of material on this album. The result is fascinating because the cello and the double-bass merge entirely into a deeply homogeneous sound so that sometimes it is difficult to distinguish who plays what. YOUTH is also a story of a friendship glued due to unforgettable moments shared at the time we were both students at Naples Conservatory. This process of composing music for us inspired me more, so “Herbarium” and “Carveriana” were created. The first, originally written for a cello solo, was inspired by a wonderful day I spent at the Botanical Gardens in London. “Carveriana” comes from my big passion for the great American poet Raymond Carver, whose short-story-style influenced deeply the structure of all the works performed on this album.

Berlin-based cellist Enzo Caterino has a multifaceted career as a chamber musician, collaborative artist and orchestral player. His activity spans Baroque and Classical traditions to contemporary and popular genres. Born in 1978 in Naples he starts his musical life really early as an electic bass player making music with many rock progressive and jazz bands. Later on he gratuated successfully at the Conservatory San Pietro a Majella of Naples. He has been dedicating his passion for many years to baroque music playing with small ensembles troughout Italy. In 2012 he moved to Germany and started different projects as a cellist and composer, writing and performing music for theatre, dance and visual artists using electronic devices too. Recently he took part at the Q3 Festival in Potsdam where he premiered some of his cello solo compositions. His works, mostly for cello solo or small ensembles, are performed in Germany, Italy, Poland and Austria.

Italian double-bassist Orazio Ferrari has gained great critical acclaim for his debut album, the world premiere recording "Chopin & Schumann" (Velut Luna - CVLD 245). In this 2014 release, to be understood as the summa of his instrumental and musical beliefs, his way to approach the double-bass is modern, bold and completely centered to reach the highest musical goals through an instrument widely misunderstood in the Classical Music field. This “boldness” comes from the intent (rather a strong will) to play cello music on the double-bass at the same cello pitch, expanding very much the possibilities of the instrument without any modification or arrangement of the original cello score. This deserved praiseworthy reviews by some of the most important international music magazines such as The Strad, Gramophone and Audiophile Sound. Orazio Ferrari was born in Crotone. He started to play piano at 7 and graduated brilliantly and in advance of schedule in Double-bass at “San Pietro a Majella” Conservatory in Naples under E. Calzolari, achieving afterwards a Master Degree in Solo Double-bass with full marks. He performs by using exclusively the standard E-A-D-G double-bass tuning.