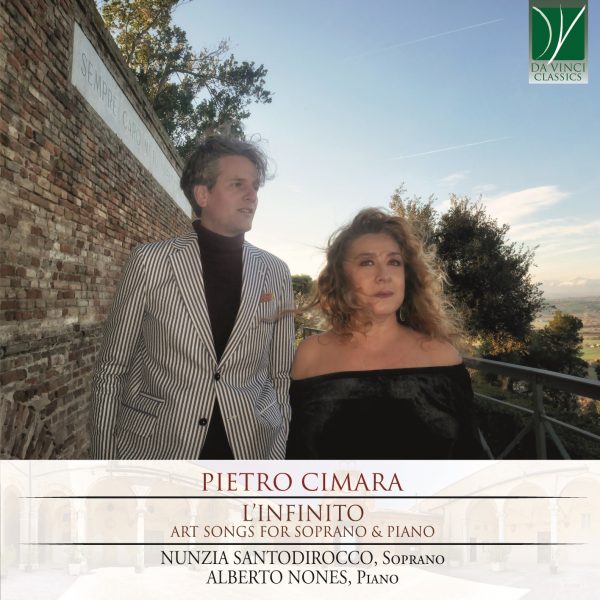 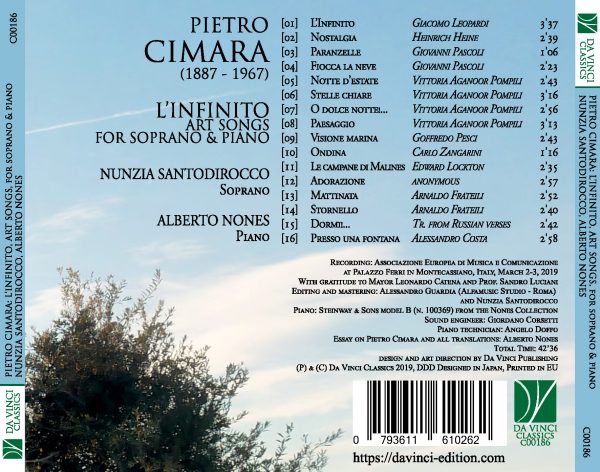 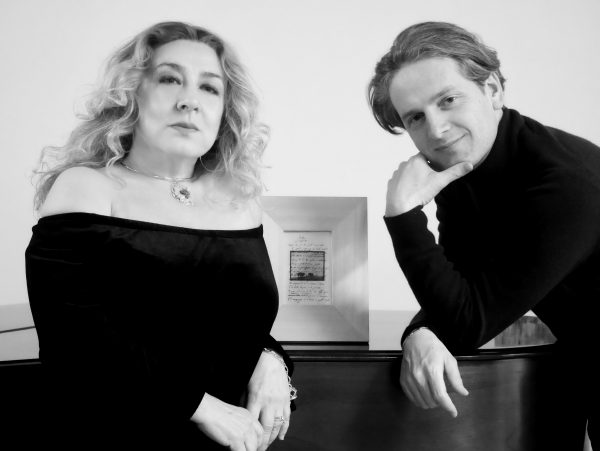 Extract from: Pietro Cimara, the infinite. Or all in a how, An essay by Alberto Nones

Pietro Cimara was born in 1887 in Rome, where he studied composition at the Liceo musicale di Santa Cecilia with Ottorino Respighi, “my Master” to whom he would dedicate Notte d’estate, and died in Milan in 1967. But aside from traces of information to be found in a few sources, he is a figure wrapped in mystery. Son of Giovanna Putti and Giuseppe, it is not known how he approached music; it is certain that he also studied with teachers like Stanislao Falchi and Alessandro Bustini (who will also teach Petrassi and Maderna), complementing his studies with a degree in law. He began working at the Costanzi theater in Rome first as a substitute and then as a conductor, also distinguishing himself (especially within aristocratic circles) as the composer of songs. A decisive moment was the preparation in that same theater of Il Trittico by Puccini, whose triumphal premiere was in 1919, and on which occasion the young Cimara collaborated not only with Puccini, but also with Toscanini. In the following years he was assistant and collaborator with the main conductors of the time, such as Tullio Serafin and Vittorio Gui (a composer of art songs, too). Gui, on the occasion in which he invited Cimara to conduct La traviata at Covent Garden many years later, wrote that the invitation was due to a man who usually worked behind the scenes and must see his talent openly recognized. In the meantime, Cimara’s reputation of “unsurpassed accompanist” had brought him to work with both the spinto soprano Eva Tetrazzini-Campanini, and her more famous sister Luisa Tetrazzini, coloratura soprano whom he accompanied in a world tour in ’19 -’20, in which the programs presented some compositions of Cimara, too. A 1922 document testifies his qualities at the piano. It is a CBS/Odyssey LP of the “legendary performances” series, which we could listen to thanks to the ICBSA State Audiovisual Archive in Rome. It features bass Salvatore Baccaloni who – besides declaiming some Sonetti romaneschi by Trilussa over a mesmerizing and witty piano improvisation – interprets various arias and songs from his repertoire, as well as Cimara’s Fiocca la neve (transposed in C minor from the G minor of the printed editions, and with double bass in the last two chords) with the composer at the piano. Cimara demonstrates here not only the dynamic and agogic command of a great conductor, but also the palette of sounds of a great pianist. In that whirling of concerts and conducting, composition was doomed to remain in a niche. In 1928 Cimara began working at the Metropolitan in New York, where he conducted an impressive number of operas and concerts with the foremost singers of the day, really without sparing himself until 1958, when, conducting La forza del destino (of course!), he fell from the podium in the orchestra pit and was taken to the hospital, while violinist Walter Hagen stepped to the podium to complete the scene; quite a coupe de théâtre, one might think, but it was a serious heart attack, after which he could not resume working again. Since his untiring commitment as a conductor had almost invariably been in roles of preparation and second performances, Cimara went into obscurity. His character had always led in that direction, and perhaps he had become even more reserved after the early death of his only daughter. Melody M Rich, the author of a doctoral thesis which is one of the few sources of information on Cimara’s life and works to-day, hypothesized that the mysterious dedication of Nostalgia “to …” could have been meant for her daughter, and we like to believe it too. A shy person, jealous of his affections, Cimara loved and served music with total dedication but without outcry. It is an even greater and rarer privilege, therefore, to contribute to bringing his music and figure back to light. The music is so heartfelt and authentically inspired, in our opinion, that perhaps the composer himself was torn between cultivating and giving it to the public, or keeping it in a drawer or at least just within small circles. Infinite in the sense of unfinished or incomplete, one would seem to have to conclude.

Alberto Nones: Pianist and musicologist. He graduated summa cum laude in Piano from the Conservatory of Music of Trento under the guidance of Antonella Costa, and continued his studies with masters like Paul Badura-Skoda and Franco Scala.
Further, he graduated in Philosophy from the University of Bologna, went on to study at the London School of Economics, where he earned an M.Sc. in Political Theory, and completed his education in the humanities with a Ph.D. in International Studies at the University of Trento.
He was Marie Curie Early Stage Researcher at the University of Cambridge, Fulbright Visiting Researcher and Post-Doc at Princeton University, and postdoctoral fellow at the University of Trento.
His research focuses mainly on the relationships between music and politics/society, and he has written books on subjects that span from Verdi and Zandonai to the Doors, besides essays that have appeared on peer-reviewed journals like Music and Politics.
He is a SIAE author and composer, a RAI broadcaster and the founder and president of the Associazione Europea di Musica e Comunicazione, a cultural association which organizes concerts, masterclasses, seminars, competitions, book and CD presentations, and conferences on music and communication.
A sought after soloist and chamber musician, he gives concerts throughout Europe and collaborates with many artists.
His recordings have been presented by RaiRadio3 (Primo Movimento) and Radio Classica (Top 10). They include the Sonatas for Piano and Violin by Brahms (with violinist Franco Mezzena) and a highly acclaimed double CD dedicated to the Complete Mazurkas by Chopin.
wo distinguished Italian critics have reviewed his Chopin recording with these words:
“[He] embarks on an almost impossible undertaking. Chopin’s Mazurkas are the fruit of his most personal research, his intimate diary. Alberto Nones succeeds marvellously. [...] allowing us to enter into Chopin’s workshop” (Dino Villatico); allowing us to enter into Chopin’s workshop” (Dino Villatico);
“The great Chopin interpreters are capable of making one hear, with their playing, not just Chopin’s music, but Chopin himself... Nones’s reading makes us understand that Chopin’s Mazurkas embody a suffering that is softened. A revelation” (Andrea Bedetti)

Nunzia Santodirocco
Critics have described her as "a soprano with a powerful voice, rich in harmonics, able to delight the public with her highly dramatic connotations”.
After graduating in both singing and piano, she immediately began a career that led her to sing the main lyric soprano roles in some of the most prestigious theaters around the world. Suffice it to recall here the following most recent engagements: "Aida" at the Arena of Verona, Julian Kovatchev conducting, and at the Teatro Verdi in Salerno, with Daniel Oren, as well as at the Daegu Opera Festival in Korea and at the Seoul Arts Center in a production by Teatro alla Scala; "Tosca" at the Cairo Opera House and at the Politeama Theater of Lecce; "Madama Butterfly" at the Seoul Arts Center (in a production of Teatro Petruzzelli, directed by Daniele Abbado), and in Kyoto (a production of Teatro Comunale di Bologna); "Un ballo in maschera" at the Cervantes Theater in Malaga in co-production with Opéra de Massy, and at the Politeama of Lecce; opera gala at the Tokyo Opera City Concert Hall.
The Italian Ministry of Foreign Affairs has invited her as representative of bel canto throughout the world (Uzbekistan, Georgia, Malaysia, Indonesia, Senegal, Bolivia, Ireland, the UK, Slovakia, Luxembourg, Czech Republic, Hungary). In 2007, upon the thirtieth anniversary of Maria Callas's death, she was chosen for the stage show "Callas Album", a test that proved her ability to "give voice" to The Divine in some of the most challenging numbers of her famously wide-ranging repertoire. On that occasion she started collaborating with Alberto Nones.
Her recordings include "Madama Butterfly" (Ricordi), "Lo sposo burlato" (Bongiovanni), "Giuseppe riconosciuto" by Anfossi (Fonè) and the Complete Oratorios by Carissimi (Brilliant Classics).