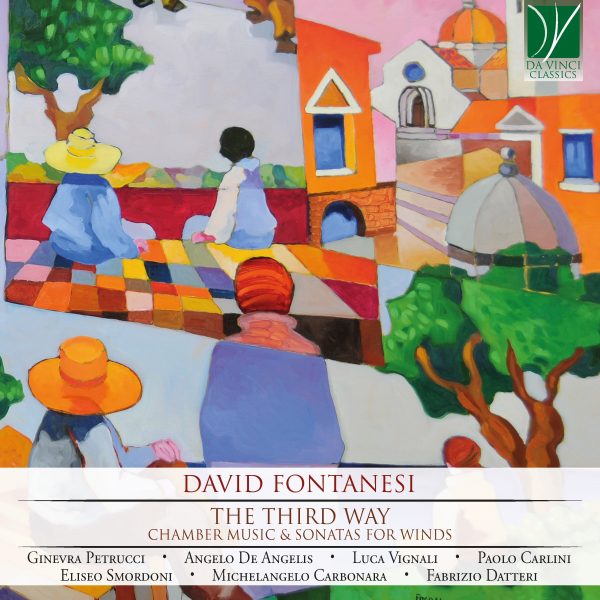 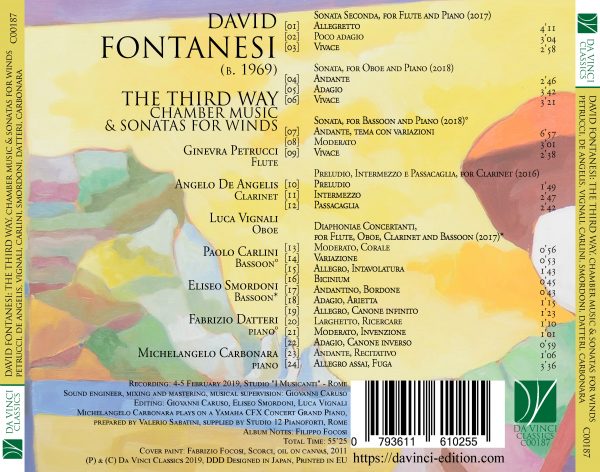 There are different ways in which a classically trained composer can nowadays be labelled as contemporary, whereas such a term is not intended in the literal/chronological sense. For some, being contemporary means to keep following the path ‒ the only possible one, according to the advocates of the most orthodox avant-garde movement ‒ opened up by the dodecaphonic school and resulted in structuralism or, alternatively, in spectralism. For others, contemporaneity must rather be sought and pursued by abandoning the strictness of cold and dissonant formalism, and by experimenting with classical as well as non-classical sources, the latter comprising jazz, rock, folk, and electronic music. For still others, it is possible to write contemporary music by moving along the lines traced by western classical music tradition, i.e. by recovering and renewing its stylistic features and formal solutions and by using them in order to satisfy those expressive ends which are perceived as more urgent. The latter ‒ according to the threefold subdivision hereby proposed, not to be understood in a strict sense, insofar as it allows for mutual intrusions ‒ is the way followed by David Fontanesi. His language draws fully ‒ in a conscious but creative manner ‒ from the rich array of techniques inherited from the past: counterpoint, in the first place; the dialectical resources of tonal harmony; classic forms like fugue or theme with variations. He is able to combine dense contrapuntal dialogues between the instruments with episodes of genuine lyricism. Paradigmatic, in this sense, are the sonatas for flute and oboe (composed respectively in 2017 and in 2018), in which melodies imbued with a subtle feeling of nostalgia flow through smooth harmonic canvases ‒ which recall some twentieth-century French composers, such as Poulenc or Francaix ‒ before they give way to the rhythmic liveliness of the baroque-like fast sections, which sometimes make their entrance even during the unfolding of a slow movement. Within a firm and balanced structural frame, Fontanesi introduces subtle but clearly perceptible deviations, which keep the listener’s interest alive and lead to surprising shifts in content. An example is found in the bassoon Sonata, whose melodic treatment leads to a semantic ambiguity that carries us through the realms of the elegiac, the meditative and the burlesque ‒ thus exploiting the natural disposition of the bassoon to express emotional states of such a kind ‒ and that, due to the restless rhythmic figures performed by the piano, ends up in an almost metaphysical sensation of inevitability, only slightly attenuated by the unexpected conclusive diminuendo. Sometimes the significant deviations are to be found in those intrusions I mentioned above. The Diaphoniae concertanti quartet (2017) for flute, oboe, clarinet and bassoon, which is divided into twelve short movements, is ‒ as the title itself suggests (diaphonia means just that: dissonance) ‒ focused on the dissonances generated by melodic twists, harmonic progressions and timbral combinations. Nonetheless, we are far away from the bothering cacophony associated with radical atonality; here the sonic harshness is used as a tool to introduce moments of ension while leaving room for enjoyable listening experiences, which are guaranteed by the admirable overall polyphonic architecture as well as by the intricate mosaic of variations carefully devised by the Author. The result is ‒ here as elsewhere ‒ a music which oscillates between the ancient and the modern, thus eliciting an engaging contrast between an atmosphere of familiarity and a sense of bewilderment which brings to mind some paintings belonging to the Hyper-mannerist art movement of the 80’s, better known as Anachronism.
Once again, chamber music reveals itself to be the most apt field to bring out the dialogic and intimate nature of the Italian composer’s writing. This is, indeed, the fourth recording of his works for chamber music groups, which in this case range from the short and virtuoso piece for solo clarinet (2016) to the above-mentioned wind quartet. It is in this context that David Fontanesi masterfully manages to combine formal clarity and expressive conciseness, and to mix melodic fluidity with rhythmic flexibility; these are the chief ingredients that shape his style and mark out his path ‒ a path which is well-established but still capable of future developments ‒ within the Third Way of contemporary music.
Album Notes by Filippo Focosi

ELISEO SMORDONI (Bassoon): Born in Rome in 1961, he completed his musical studies at the Roman Conservatory of Santa Cecilia, graduating under Alfio Poleggi and winning the "ARAM Award". He played as principal bassoon in Accademia Nazionale di S. Cecilia, I Solisti Veneti, RAI Symphony Orchestra of Naples, San Remo Symphony Orchestra. He also collaborated with the National Orchestra of S. Cecilia where he played under L. Bernstein, L. Mazel, C. M. Giulini, G. Pretre, Z. Metha, J. Themirkanov, K. Masur, A. Pappano, I. Fischer and others. In 1990 he won the competition for the position of principal bassoon at the Orchestra of the Opera Theater of Rome where has played, among others, under Riccardo Muti. He also carries out intense activity in Italy and abroad with the Ensemble of the Teatro dell'Opera di Roma with whom he played at: Concerti del Quirinale for Radio 3, IMK festival, Koblenza; Flautissimo festival, Rome. He has worked extensively abroad, specifically in Germany, France, Switzerland, Luxembourg, Russia, Argentina, Brazil, Japan, Tunisia and Malta. Since 1998 he has collaborated and recorded with Salvatore Accardo, as a member of the Italian Chamber Orchestra. He has recorded numerous works with the Italian Radio Television and has recorded a solo album for the RCA. He has recorded for EMI Classic and Foné.

Ginevra Petrucci: Hailed by the press as “one of the most interesting talents of her generation”, Ginevra Petrucci has performed at Carnegie Hall (New York), Kennedy Center (Washington D.C.), Salle Cortot (Paris), Teatro La Fenice (Venice), Villa Medici (Rome), Ohji Hall (Tokyo), as well as throughout China, South America and the Middle East.
As a soloist, she has appeared in concert with I Pomeriggi Musicali, I Virtuosi Italiani and the Chamber Orchestra of New York, and has released the first recordings of Edouard Dupuy and Ferdinand Buchner’s Concertos. Her chamber music experience has brought her to appear alongside pianists Bruno Canino and Boris Berman, and to a long-standing collaboration with the Kodály Quartet, with whom she has released the highly acclaimed recording of the complete Flute Quintets by Friedrich Kuhlau. Her recording of Robert Muczynski’s Sonata has been praised as “oozing with lifeblood and zest … enthralling and rousing”. In 2017 she has rediscovered and recorded Wilhelm Kempff’s Quartet for flute, strings and piano and toured Italy with its premiere performances.
Ginevra devotes much of her artistic endeavors to contemporary music. At Yale University she has collaborated with George Crumb, Steve Reich, Betsy Jolas and Kaija Saariaho, performing the American premiere of Terrestre. She commissioned Jean-Michel Damase’s last composition, 15 Rubayat d’Omar Khayyam for voice, flute and harp, and she has appeared at the Venice Biennale Contemporary Music Festival with a commissioning project dedicated to Witold Lutosławski. In 2018 she has founded the Flauto d’Amore Project, a large-spanning commission endeavor aimed to the creation of a new music repertoire for the modern flauto d’amore.
She has curated the edition of over twenty musical editions, including Briccialdi Concertos for Ricordi/Hal Leonard and first editions of works by Mercadante, Jommelli, Morlacchi, Busoni and De Lorenzo. Her scholarly articles appear in the Flutist Quarterly, as well as in the leading flute magazines in Italy and France.
She has studied at Santa Cecilia Conservatory in her native Rome with her father, and then pursued her education at the École Normale in Paris. She holds a Master and Artist Diploma from Yale University and a Doctorate of Musical Arts at Stony Brook University.
She is Principal Flute at Chamber Orchestra of New York.

LUCA VIGNALI (Oboe): He studied at "G.B. Martini" Conservatory in Bologna (Italy) with G. Siviero and continued his studies with Harold Gomberg and Lothar Koch. He is Principal Oboe at Orchestra del Teatro dell'Opera in Rome, where he has played under world-renowned conductors. He has won several international prizes and collaborates with the most prestigious Italian orchestras and festivals. He has toured Europe, USA, Latin America and Japan in highly praised concerts. He has recorded for labels Edelweiss, Musikstrasse, Bongiovanni, EMI, Fonè, Tactus, Brilliant Classics. He edited several transcriptions for orchestra and wind ensemble of compositions of the 19th Century and he revised Corticelli's Trios for oboe, bassoon and piano with A. Specchi and P. Carlini. He regularly teaches masterclasses and since 2014 he collaborates with the Asian Youth Orchestra as oboe tutor.

Michelangelo Carbonara: He graduated at seventeen at the Conservatory Santa Cecilia in Rome, with full marks, under Fausto Di Cesare’s guidance. In 1999 he was awarded his Piano Specialisation Degree by the Academy of Santa Cecilia, under Sergio Perticaroli's guidance.
He continued his studies at the Salzburg Mozarteum and at the Académie Musicale de Villecroze in France. He attended masterclasses headed by Bruno Canino, Dominique Merlet and Gyorgy Sandor.
In 2001 he was admitted to the International Piano Academy Lake-Como headed by Martha Argerich. He had lessons with many important pianists such as Leon Fleisher, Dimitri Bashkirov, Fou Ts'Ong, William Grant Naborè, Claude Frank, Menahem Pressler, Andreas Staier, Peter Frankl and Alicia De Larrocha.
He has won 17 prizes in International piano competitions.
In 2003 he gave his first performance in China, and a masterclass at the Central Conservatory in Beijing.
In 2007 he made his debut at Carnegie Hall, New York and he now performs regularly in Europe, America, Asia and Africa.
He has recorded for Papageno, Tactus Suonare Records, Nascor-Ysaye Records-Harmonia Mundi, Egea, Brilliant Classics, Piano Classics labels. He gave chamber music masterclasses at USAC in Viterbo and piano masterclasses in Romania, China and Canada.
In 2005 he was invited at the National Prize for Arts, promoted by the Italian Ministery for Culture, as testimonial for the italian music. He is Piano Professor at "C.G. da Venosa" Conservatory in Potenza, Italy.