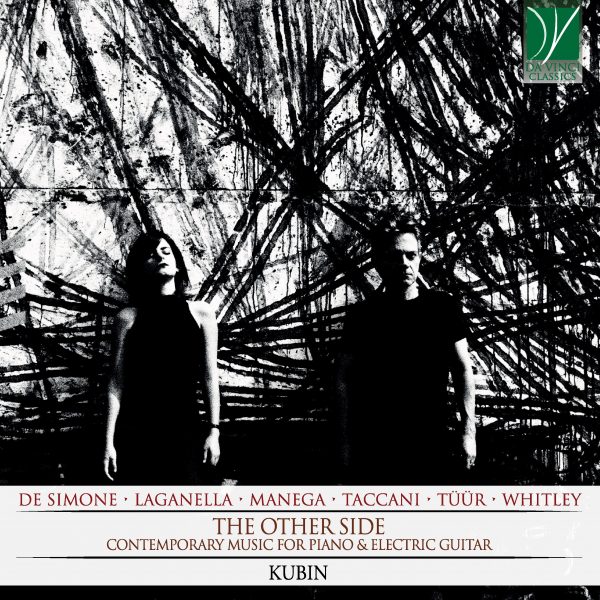 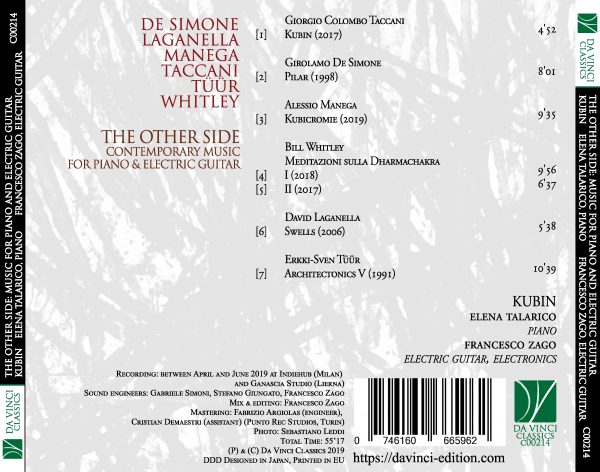 The 20th century chamber music literature is certainly noteworthy for the originality and extravagance of certain ensembles, but perhaps none is more heretical and unconventional than Kubin (named after the famous Austrian expressionist writer and illustrator). At first glance, the combination of electric guitar and piano may seem completely unbalanced: on the one hand, we have the variety of timbrical possibilities of the electric instrument and its almost infinite ways of modifying the sound through pedals and effects, on the other there is the voice of a traditional instrument which, compared to its counterpart, paradoxically lacks a certain timbre monotony. However, the duo formed by the guitarist Francesco Zago (1972) and the pianist Elena Talarico (1993) succeeds in bringing into play such a wealth of colors to easily deny the aforementioned considerations.
Kubin was born with the precise intention of «revisiting twentieth-century “cultured” music, together with chamber reinterpretations of the most advanced rock» (Zago), and this unity of opposites is evident on several levels. First of all instrumental, through the dialogue between the electric instrument and the «analog» one. Then in terms of repertoire, with the proposal of pieces belonging both to the tradition of written and popular music. On a personal and generational level, the two musicians, although very different from one other both in terms of education and personality, managed to unite their sensitivity and musical vision through The Other Side.
The choice of the songs proposed in this cd is diverse, from almost minimal-ambient situations to more driven pieces, recalling grunge and noise rock textures. It begins with the namesake Kubin by Giorgio Colombo Taccani (1961), one of the most successful composers on the Milanese scene. The piece is a frantic though brief succession of brutal gestures that bounce between the distorted guitar and the piano, used here in a very percussive way. A common thread that guides the listener through this almost uninterrupted magmatic flow (if we exclude a small, more relaxed central section) is a sequence of notes repeated on the piano that can be heard almost immediately and that occurs more than once throughout the piece, evolving but still being recognizable, standing out above the sound mass generated by the electric fury of the guitar.
Different in spirit and sound is the piece by the Neapolitan composer Girolamo De Simone (1964). He and his Pilar offer a Mediterranean sound dimension, more tranquil and appealing, that gives a nod to a certain post-rock music from the early 90s and ambient music. A dreamlike dimension in which the guitar plays the role of both background and protagonist. The electric instrument dialogues with the piano through a series of melodic riffs and suggestions to which it responds with a light but lyrical impulse.
The third Italian in the cd is Alessio Manega (1990), a young guitarist and composer from Verona who has been trying to merge his two natures into his own pieces: that of a funk-rock musician and educated composer. His Kubicromie, a collage inspired by the work of Frank Zappa, is in fact affected by an improvisational approach of rock and blues, although the material used is very far from that world. The electric guitar is expertly treated by the composer through a rich and sophisticated use of effects: it goes from aggressive heavy metal riffs to the lightness of drones and pads that seem to be generated by analog synthesizers. The piano, almost a drum-machine, is the background of the guitar, the real protagonist of this piece.
The two Meditazioni sulla Dharmachakra by Bill Whitley (1968) throw us into Oregon, in the United States, in an (acoustic) environment very far from the previous ones. Whitley is a composer influenced in his research by the world of nature and meditative practices: therefore, it is no coincidence that these two pieces, written specifically for Kubin, are very close to the aesthetics of American minimalism of Steve Reich and Terry Riley. The setting of the two pieces is affected by this style: a sequence of sections, either of which develops a process generated by a limited musical material. Furthermore, the ascetic idea that this music seems to emanate brings us very close to the religious currents that were of inspiration to the fathers of minimalist music.
From the East Coast (Philadelphia) comes Swells by David Laganella (1974). Unlike all the previous pieces, here the guitar and the piano do not dialogue, but unite their voices to create stabbings that lacerate the silence. These gestures press the discourse that develops into a progressive and destructive spiral made of dissonant agreements in the acute register and then suddenly defragment towards the end, generating a trail of sound that gradually extinguishes and fades to nothing. The guitar, in vain, mumbles something before finally reducing itself to silence.
The cd is closed by Architectonics V of the Estonian Erkki-Sven Tüür (1959), a piece with a decisively more lyrical imprint than all the others. The melodic frame of the whole speech is a four-note unit that the piano reiterates obsessively, slithering like an idée fixe throughout the sections of the piece. Here the piano makes its presence felt, bringing to light in the more atonal and percussive sections and in the more melodic ones. The guitar accompanies him in a free counterpoint of distorted riffs and electronic atmospheres, but without ever invading the field of action of his companion.
At this point the proposal of The Other Side (which is also the title of a fantastic novel by Alfred Kubin) is evident: to show «the other side» of the music, the hidden and not always visible one, whether it is contemporary music or popular music, that «dark side of the moon» just waiting to be illuminated by bold musicians like Kubin.

In 2016 Elena Talarico and Francesco Zago gave life to KUBIN, an almost unique ensemble (piano and electric guitar) proposing an unconventional repertoire: 20th century «classical» music, new compositions, and chamber reinterpretations of the most advanced rock. The name of the duo is inspired by the visionary genius of the Austrian illustrator and author Alfred Kubin, whose only novel is The Other Side.