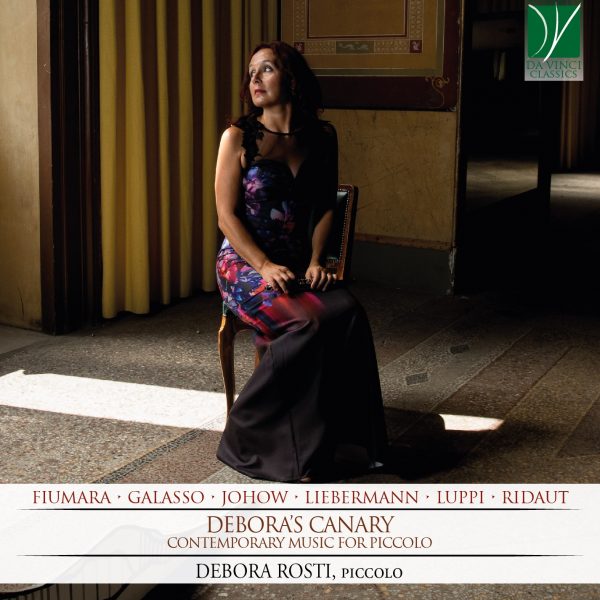 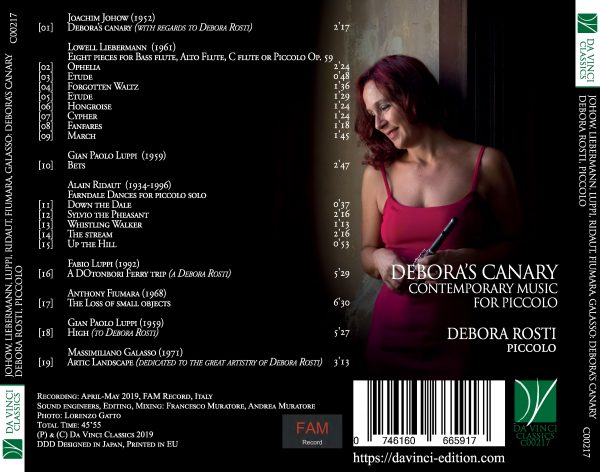 I loved every creative moment of this project that has involved many extraordinary musicians and friends. The best part was having had the chance to compare my musical ideas with theirs and attempting to execute what they had written for me. Some of these pieces were conceived expressly for me and bringing them to life was a particularly valuable artistic achievement; the music was imagined with my sound in mind, for my way of being a musician, and through performance it reaches its full realisation. It was also my intention to try to expand the repertoire for Piccolo by encouraging the composition of new works. This initiative was embraced in particular by Gian Paolo and Fabio Luppi, who have given our literature new, important gems.

J. Johow: Debora’s canary
I´ve written this little piece of music for Debora Rosti and her piccolo. It´s like a tropical canary with some baroque and Latin influences. Maybe a bird singing in different foreign languages.

L. Liebermann: Eight pieces Op. 59
American composer, pianist and conductor, among the most important of his generation, Liebermann receive the commission of the Eight pieces in 1997 from Sarah Baird Fouse and first performed by her on August 1998 at the National Flute Association Convention in Phoenix, Arizona. Each piece is a well-constructed work with many dramatic possibilities thanks to the freedom that the composer gave to the artist to play several types of flutes (bass flute, alto flute, C-flute and, the one used in this recording, piccolo). An opportunity to show off color possibilities where, as the complete title claim, the “flutes may be mixed at the performer’s discretion”.

G. P. Luppi: Bets
BETS is a cycle of four works for piccolo, flute in C, flute in G and bass flute. The piece for piccolo was written with the help of the unforgettable Annamaria Morini, a great virtuoso of this instrument. It is an étude in which sounds are created at all possible registers, with permutations, sequences, retrograde motion and advanced techniques that enhance the virtuosic abilities of the performer and the timbre of this particular instrument. Gabriele Betti was also instrumental in the genesis of this work as both a fellow student and an extraordinary interpreter.

F. Luppi: A DOtonbori Ferry trip
In this piece the composer attempts to recreate the

atmosphere of a pleasant walk along the Dotonbori River in Osaka. The notes on which it is polarised, as the capital letters in the title suggest, are la (A), do (C) and fa (F). Using references to the whole-tone scale, a technique typical of Debussy, essentially two situations are put into contrast: one is calmness, the inner serenity that you feel during the hypothetical walk, painted through melodic phrases with broader time values and in the dynamic of “piano”, the other is the restlessness that arises (due to the sudden chirping of a bird – represented by the fast repeated notes – that distracts the walker and breaks this atmosphere of tranquillity and inner peace). Through the use of different expressive techniques typical of the piccolo the composer seeks to describe the continuous sequence of calm moments occasionally disrupted by these sudden chirps, which can be considered pleasant but also annoying if repeated excessively. The alternation and the evolution of these two ideas characterise the entire piece.

A. Ridaut: Farndale Dances
Composer native of England, Alan Ridaut wrote the Darndale Dances in 1992, together with another composition of similar title as the Dance Preludes. It could be considered the unique and most important contribution of the author to piccolo literature. Under the banner heading of Farndale Dances, the singles pieces are named Down the Dale, Sylvio the Pheasant, Whistling Walker, The Stream, and Up the Hill. It is a fun set of five dances with a home-on-the-farm flavor

A. Fiumara: The Loss of Small objects
People lose things all the time, often small objects of great value. I was thinking about this when I was composing this work for piccolo?the smallest instrument in the family of flutes. The piccolo too often plays a limited role: in orchestral music it is the superlative of the highest register; in chamber music, it is almost non-existent. It almost seems like the piccolo got lost underway among the larger instruments. In The Loss of Small Objects I wanted to hear the piccolo in its lower, archaic register. Not screamingly loud but rather soft; not on roller coaster speed but oddly flowing and lyrical.

F. Luppi: High
High is a piece for Piccolo written at the invitation of Debora Rosti, to whom it is dedicated.
This work is intended as a brief exploration of the technical and timbric resources of this unique instrument of which Debora has been a magnificent interpreter for years. It has a rhapsodic character and alternates expressive parts with significant technical difficulties, all with the aim of exalting the various possibilities of this instrument, which is often relegated to small roles of doubling in the orchestra, even though it possesses great personality and highly distinctive timbral qualities. My thanks also go to my fantastic colleagues Gabriele Betti and Annamaria Morini who have encouraged me ever since I was young to enhance the value of this wonderful instrument.

M. Galasso: Artic Landscape
Arctic landscape is an interior projection reproduced in music for those who, like many of us, have never been there, and thus in which real and imaginary elements are mixed together and then moulded into a personal vision.

Debora Rosti was born in 1971 in Modena, Italy. She began studying the flute at age 13 with Gabriele Betti at the Conservatory “O. Vecchi” in Modena and just six years later, in 1990, she successfully obtained her Diploma in Flute at the Conservatory of Music “L. Campiani” of Mantua. She continued her studies at the International Academy of Music (ICONS) of Novara with Glauco Cambursano, at the School for Advanced Musical Studies (APM) of Saluzzo, at the Conservatory of Geneva under Maxance Larrieu, where she obtained the Prix de virtuosité, and with Maestro Bruno Cavallo. She has worked as a flutist and piccoloist with nearly all major Italian opera and symphony orchestras, including the Orchestra del Teatro “Carlo Felice” in Genoa, the Orchestra del Teatro “La Fenice” in Venice, the Orchestra dei “Pomeriggi Musicali” in Milan, the Orchestra “A. Toscanini” in Parma, the Orchestra del Teatro Massimo in Palermo, the Orchestra of the Teatro “V. Bellini” in Catania, and the Orchestra del Teatro “Alla Scala” in Milan, where in 2001 she was also one of the two finalists in the international competition for the vacant piccolo position. Since 2000, she has held the position of Principal Piccolo in the Orchestra Sinfonica Siciliana in Palermo. She performs frequently as a soloist and with various chamber groups. For several years she has been committed to teaching the piccolo and has developed and refined a unique pedagogical technique for this instrument. She is frequently invited to hold courses and master classes at several Italian advanced specialization academies and national conservatories. In 2017, her collection of Baroque pieces for piccolo “BAR-OCT” was published by Da Vinci publisher, and her performance of those pieces was released on CD that same year, on the same label. She was invited to perform at the National Flute Association’s Annual Convention in Minneapolis in 2017. Her research into the piccolo soloist’s repertoire is on-going, and she has become proficient at discovering and arranging works originally written for other melodic instruments that are particularly-suited for her instrument.

Gian Paolo Luppi: He studied at the Conservatory "G. B. Martini" in Bologna, graduating in Composition, Conducting, Choral Conducting, Instrumentation for Wind Band, and Piano. He has been teaching in Italian conservatories since 1981 and has become Professor of Composition at the Conservatory of Bologna since 1996. Winner of numerous national and international competitions, he has published with Peters, Edipan Ut Orpheus, and other publishers. His music is broadcast by all European radios and is featured on various CDs and LPs. He has been a guest lecturer at various European institutions and at the Aichi University of Nagoya.

Massimiliano Galasso was born in 1971 in Modena, Italy. He completed his musical studies of the Bassoon with Prof. Paolo Carlini in 1992. He is self-taught in Composition and has composed many pieces for chamber ensembles.

Since 1997 he has held the position of Second Bassoon in the Orchestra Sinfonica Siciliana in Palermo.