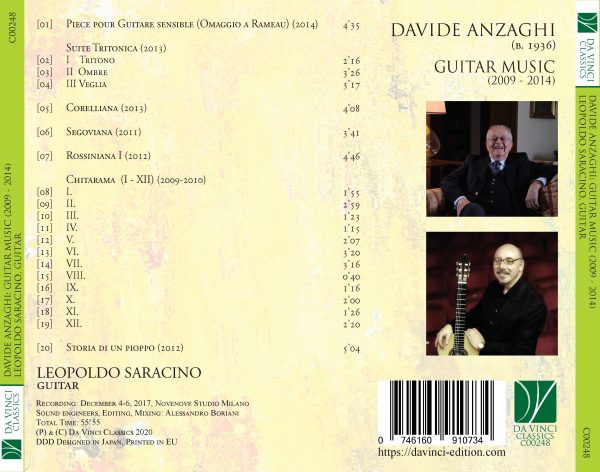 Pièce pour Guitare Sensible
Pièce pour Guitare Sensible was written in 2014, on the occasion of an event during which, on September 28th, 2014, Davide Anzaghi was awarded the Premio Chitarra d’Oro 2014 by the Permanent Committee of the International Classical Guitar Competition “Michele Pittaluga” of Alessandria, Italy. The composer wrote: “It so happened that I reached my seventieth birthday without having written anything for guitar. It was not due to a dislike for the six-stringed instrument, that I hitherto refrained from writing for it. Quite the opposite. Abut the guitar, I share the memorable definition transmitted to us by Claude Debussy: ‘La guitare est un clavecin mais expressive’, ‘The guitar is a harpsichord, but an expressive one’. ‘Expressive’ is a word which can trigger furious (and equally pointless) ideological debates. However, the way Debussy intended it testified to a composed, shareable and golden expressiveness. Why thus should one elude the meeting with this expressive instrument?”

Suite tritonica
The composer is convinced that the culture of the guitar is not inclined to the linguistic experiments of the twentieth century, which are more present in the case of other instruments. Davide Anzaghi pursued the double goal of composing guitar pieces combining a high compositional quality with an accessible linguistic code. His Suite Tritonica consisently demonstrates the composer’s standopoint. In the first two movements, the “tritone” appears frequently, lending stylistic coherence to the underlying idea. The third movement is given a compositional livelihood corresponding well to its role as a conclusion.

Corelliana
Guitarist Piero Bonaguri asked Anzaghi to write a piece inspired by Corelli. The composer abundantly drew from the famous theme of the Follia. Was it a folly, a follia, to recreate a remote style, time and musical aura? Anzaghi juxtaposed the past to what, of the past, is remembered. According to St. Augustine, Past consists of the Present which remembers.

Segoviana
Segoviana was written in 2011, upon a request by a disciple of Segovia. The occasion allowed D. Anzaghi to design a work in which the multifaceted suggestions created by Segovia’s guitar could merge. Anzaghi did not consciously elude the conspicuous tonal expectations of the guitarists’ milieu, a world disinclined to enjoy some of the avant-garde’s mystifications – mystifications that the composer of

Segoviana in turn considers as such. With this piece, Anzaghi demonstrates that he is not afraid of the past, while having shown that he is not merely replicating it.

Rossiniana I
Rossiniana I is made of a first part (faithful to the beginning of the Overture to Rossini’s Guglielmo Tell), and of a second part aiming at eradicating the Overture’s “storm” from it tonal roots. The composer’s imagination found, in the tonal obliquity he pursued in this second part, some stimuli for manifold inventions, both instrumental and compositional. This work was premiered at the Rossini Opera Festival (ROF) in Pesaro in 2013.

Chitarama (I – XII)
Chitarama is the title both of the collection and of each of the pieces constituting it. The individual durations of each of the twelve pieces are between two and four minutes. Since this is not a Suite, but rather a series of aphorism-like pieces, autonomous from each other, the performer is allowed to excerpt from them, privileging the contrast among the selected pieces. Composing for the guitar was something the composer arrived to late in his life. However, he applied himself eagerly to this task, led by the instrument’s acoustic fascination.

Storia d’un pioppo
Initially conceived for soprano and piano, on lyrics by Anzaghi himself, Storia d’un pioppo later found, in its more recent version for solo guitar, a different and congenial confluence. The story draws from an ancient legend transmitted by the fishers of the river Po. In this tragical and mythical story, infused with jealousy, on a river’s bed a man stabs the woman he loves, close to a dismayed poplar. The tune’s repetition, which is reinvented each time it reappears, fills this funereal story with pathos. The music flows from a guitar filled by the sadness which the woman’s martyrdom propagates on the bed of the great river.
(Translation by Chiara Bertoglio)

Leopoldo Saracino is one of the leading guitarists in Italy. Born in Milano (Italy) in 1965 he made his debut at the age of 14. Since that time he has pursued a varied career as a recitalist, concerto soloist and chamber musician that brought him in Switzerland, Germany, Denmark, Finland, Austria, Greece, Canada and of course all over Italy. He studied with Ruggero Chiesa, at the State Conservatorium G.Verdi of Milan. Subsequent studies have been with David Russell, Oscar Ghiglia, Leo Brouwer, and David Tanenbaum. He won several international competitions, such as the international competition "M.Giuliani", the International Prize of Contemporary Music of Lagonegro and the Scandinavian International Guitar Competition. His particular interest is the original music of the 19th century played on an original instrument of Louis Panormo. He is regularly touring all Europe with concert programs including works by Rossini, Paganini, Giuliani among others. His love for chamber music brought him to the recordings of various Cds with several Masterpieces of the chamber repertoire of the classic style. To remember is the first modern recordings of the complete works of Ferdinando Carulli for guitar and Fortepiano in 8 Cds for the Label Nuova Era or the recordings of chamber works by Filippo Gragnani and Anton Diabelli. As solo player he recorded the 36 Capricci for solo guitar by Luigi Legnani. He likes also playing the traditional guitar and his repertoire is particularly wide and range from baroque to contemporary music. Leopoldo Saracino is not only a busy recitalist but his activity includes a lot of concerts with Contemporary music Ensembles. Among them he tour regularly with New Made Ensemble and Dedalo Ensemble. He collaborates with MDI Ensemble in the recording session of a CD dedicated to the italian composer Stefano Gervasoni. He is also member of the Italy based Guitar trio “Chitarra-trio” with whom he made the cd “Music for 18 strings”. He is professor in the state Conservatory in Brescia (Italy) and is regularly invited to hold masterclasses in Italy and Germany.

Son of the musician Luigi Oreste, Davide Anzaghi started his musical career as a very young performer in 1950 and since 1952 he won a number of international competitions feeling at an early age his vocation for composition. At the beginning of the 1970s, Anzaghi renewed his concept of writing music, and in 1972, he was proclaimed the winner of the National Composition Competition of Treviso by a jury presided over by G. F. Malipiero. In 1974, he was the winner of the International Composition Competition Olivier Messiaen proclaimed by a board consisting of G. Ligeti, Ton de Leeuw, W. Lutoslwski, and I. Xenakis and presided by O. Messiaen himself. Anzaghi's adherence to the poetics of the late twentieth century was not ideological: in his compositions, the author did not cease to believe in the emotional and aesthetic components of musical language instead of musical experiments and sterile creations. The author's orientation is evidenced by the motto "The denial of communication is solved in the communication of negation." Anzaghi's music originates from being a composer by vocation and not by volition. His new CD shows significant results in Anzaghi’s piano solo composition. This CD offers a meditated anthology of the compositional itinerary of the Milanese author whose music aspires to be loved before being evaluated.