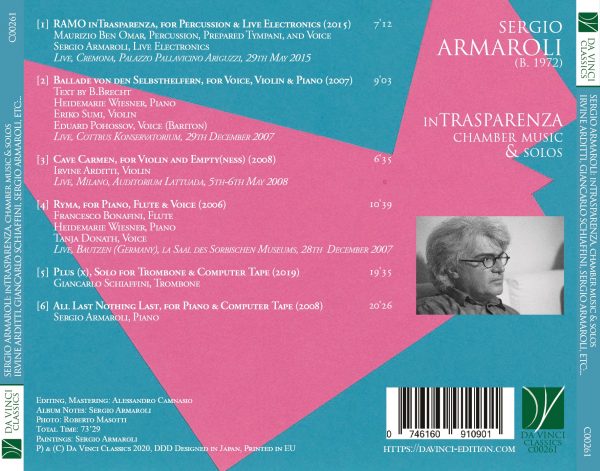 Sergio Armaroli’s poetics encompasses multifaceted expressive fields, in the constant quest for a unity of the experience. He defines himself as a painter, a concrete percussionist, a fragmentary poet and an artist of the sound, while he grounds his work inside the “language of jazz” and of improvisation as a “broadening of the concept of art”. He concentrates on a diffused authorial work, being aware that he is a producer of “de-signs”, whereby the verbal invention is a “poetical gesture”; in his life, he is constrained by a constant pedagogical effort.

RAMO inTrasparenza (2015): The composition of this work originates visually, by superimposing some transparent tracing paper sheets: starting from a portrait [see Image 1]. Minute geometries which are drawn and ramified outline, in space, the possibilities for the performer’s gesture within an open and potentially infinite acoustic field. Signs offer themselves as minimal suggestions for performance, as truly transparent trails in the organicity of sound. The use of small percussion instruments, which are made to resonate, and of bird calls, compose a hypothetical natural and safeguarded place, whose aura is preserved in the memory of hearing. The synthetic and electronic sounds suggest different spaces and acoustic fields, which are (also temporally) superimposed: “in trasparenza”.

BALLADE VON DEN SELBSTHELFERN (2008): This is dedicated to those who help themselves. This ballade is divided into six sections, conceived as six movements. Each section, or movement, is imagined as an autonomous curtain, separated from the others. The continuity of the musical discourse is purely “sentimental”. In the willed and searched incompleteness of writing, the hearer is given time to imagine a larger development. The division in sections and movements is not rigidly conceived, but rather just suggested, leaving the stage to a single instrument which becomes the leader, at times as a soloist, at times as a meaningful voice.

CAVE CARMEN (2008): This work, in a single movement, is conceived within a suspended time: the time of listening and of waiting. In the shadow of a gesture: as the slow conquest of a space of sound. The series, as the structural organization of the material in the division of the individual sections (microform) is built on the adage: “Life means to fall seven times and to lift oneself up eight times”. Fragments of transparent and floating tunes are led within an empty time: in the Italian manner.

RYMA (2006): This dis-composed work for three instruments, three voices and three bodies originate, with the naivety of inspiration and the joy of writing, from the felicitous poetic writing by Oretta Dalle Ore, to whom the piece is dedicated. It comes from the word which suggests a “missing” sound, imagined almost as a central and constant presence: “…e le campane”, “…and the bells”. In quest of an imaginary “Classicism”, around the voice, the flute inserts itself as a double tune, and the piano leads back to the beloved Schubert. It is a “winter journey” travelled backwards in modular and never definitively concluded parts. I remember a performance of this work, which was directed with an autonomous conductor’s gesture, as if a fourth gesture, an evocation of possible and “Other” sounds. This work was commissioned by the Sorbian Museum of Bautzen, in Germany; in the Sorbian language “Ryma” means “rhyme”; the consonance among these different languages is an actual indication of brotherhood and unity among the peoples.

PLUS (X) SOLO FOR TROMBONE | FIRST VERSION (2019): This first version of plus(x) originates as the solo trombone part of a more complex work: “Per due (+ x)”, where the scoring is reduced to simple indications within temporal frames obtained through aleatory processes. Starting from the statement: “For every (x), if Ax then Bx. For any sound in x, it is never the case that Ax can be affirmed while Bx is denied”; the value of x is that of a soloist leading the two parts, A and B, which are missing in this version. The piece was composed starting by temporal duration values called “change interval(s)”: time slots which determined the structure both of the piece and of the tape. The trombone part was written in order to be forgotten in performance, almost as an improvisation.

ALL LAST NOTHING LAST (2008): The sound of the piano is conceived as a “harmonic total” starting from some single notes, played in isolation as a sound and spatial punctuation. The electronic elaboration permits to create a delusional depth of listening; thus the single notes seem to be born out of nothing, from a deep natural breathing, i.e. that of silence. The space between a note and the following appears to be extremely dilated in time, thus determining a different perception, almost suspended in time. The sound has no direction, but it fills the audible space in an all-encompassing perceptive and aural unicum: always in an empty and potentially infinite time; near-far, where music is seen as a set of dots (and constellations) in the far gaze of the eye with respect to the closer listening ear; inside-outside, in time present and time past, at the border where “naufragar m’è dolce”, where sinking becomes sweet…

Giancarlo Schiaffini, composer-trombonist-tubist, was born in Rome in 1942 and graduated in Physics at the University of Rome in 1965. Self-taught, he appeared as soloist in the first free-jazz concerts in Italy and subsequently presented his own compositions widely in the mid 1960’s. In 1970 he studied at Darmstadt with Stockhausen, Ligeti and Globokar and formed the contemporary chamber ensemble Nuove Forme Sonore. He also worked with Franco Evangelisti in 1972 and has since collaborated with the Gruppo di Improvvisazione Nuova consonanza until 1983. In 1975 he founded the Gruppo Romano di Ottoni performing Renaissance and Contemporary music. He is member of the well known Italian Instabile Orchestra. He taught at the Conservatorio “G. Rossini” in Pesaro, “A. Casella” in l’Aquila and at the Summer Courses of Siena Jazz (instrument, improvisation, composition). He plays Contemporary Music, Jazz and Improvisation in concerts and International Festivals of Contemporary music and Jazz like Teatro alla Scala, Accademia di S. Cecilia, Biennale Musica di Venezia, Autunno Musicale di Como, Settembre Musica di Torino, IRCAM, Upic and Festival d’Automne (Paris), Reina Sofia (Madrid), Ars Musica (Bruxelles), Europa Jazz Festival du Mans, Jazz a Mulhouse, Tramway (Rouen), Wien Modern, Aspekte (Salzburg), Donaueschinger Musiktage, Moers, UNEAC (Cuba), Maggio Musicale Fiorentino, Lincoln Center and Hunter College (New York). Mr. Schiaffini has collaborated with John Cage, Karole Armitage, Luigi Nono and Giacinto Scelsi in various performances and works for solo trombone or tuba have been dedicated to him by Scelsi, Nono, Amman, Alandia, Dashow, Villa-Rojo, Renosto, Laneri, Guaccero. His music has been published by BMG, Curci, Edipan, Ricordi. His treatise on contemporary trombone techniques is published by Ricordi, “E non chiamatelo jazz”, about improvisation, “Tragicommedia dell’ascolto”, “Immaginare la musica”, “Errore e pregiudizio” by Auditorium Edizioni.