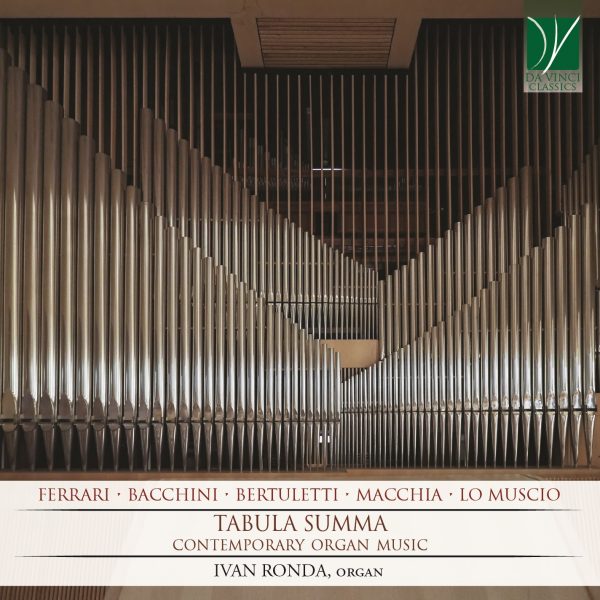 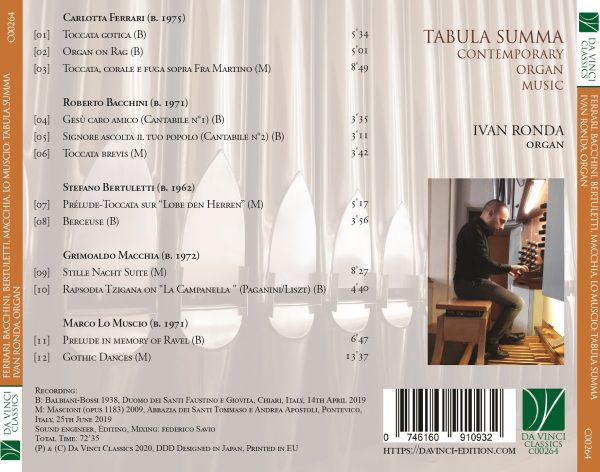 Written for Ivan Ronda, Toccata gotica is a work permeated with Medieval atmospheres. It is a tripartite Toccata, made of an initial section, forte and animated, a central section with a motion by fifths with an archaic flavour, and a final reprise. The stylistic profile of the piece is outlined through the use of the typical Landini cadence, which confers to the piece its distinctive Medieval character. Organ on Rag is an organ ragtime inspired by the typical climate of Afro-American music, but also to the aural universe of the barrel organs. It is a joyful, lively and syncopated piece. The title is a wordplay, since “on Rag” is the anagram of “Organ”. Toccata, corale e fuga sopra Fra Martino is a tripartite piece centered on what is possibly the universal melodic paradigm, a theme known by all. Fra Martino (the Italian name for the French tune known as Frère Jacques) is treated here in the form of a toccata in the first movement of the tryptich, and in the form of a two-part fugue (the so-called bicinium) in the finale. The two movements, which employ the tune respectively in a binary (as in the original) and in a ternary tempo, frame the central section, where the theme is elaborated in its inverted form; an expressive and cantabile chorale is built on its melodic unfolding.

The musical works by Roberto Bacchini belong in the collection Composizioni organistiche published by Armelin Editore in 2015. Cantabile no. 1, Gesù caro amico and Cantabile no. 2, Signore ascolta il tuo popolo are pieces with a meditative character, evoking a song expressing devotion through a refined harmonic and melodic structure, as if in a Bachian chorale. There is therefore constantly a tune, played by the Nazard or Oboe, accompanied by the left hand with sweet stops, in dialogue with the principal melody. The Toccata brevis has a solemn and majestic character; here the principal theme is entrusted to the Pedal with a high-pressure reed, creating short tunes with dotted segments. All of the sixteenth-note quadruplets form an ostinato entrusted to the Manual, which, while creating a harmonic base, also highlights a counterpoint intertwining with the Pedal line. The piece closes with broad D-major chords.

The Prélude-Toccata sur Lobe den Herren is a kind of a free Vorspiel on the famous German hymn of 1680. It is substantially divided into two sections: a first episode with an improvisational character, where it is easy to glimpse an echo of the Baroque-era stylus phantasticus, followed by a second movement whose melody, played by the Pedal, is accompanied by a rhythmic figuration with chords alternatively played by the two hands. The fascinating Berceuse, mostly focusing on delicate sounds, was conceived as a reverent homage to Louis Vierne. The piece is inspired by the great French organist’s composition by the same name (No. 19 of the 24 Pièces en style libre op. 31) and maintains the same character and structure as his model.

The Stille Nacht Suite is an organ piece written specifically for the Composition Competition “200 JAHRE JUBILÄUM STILLE NACHT”, which took place in the city of Burghausen (Germany). The piece is conceived in the form of a suite and is articulated into five movements: Fanfare – Meditation – Scherzo – Ricercare – Toccata, in which it is possible to hear the extremely famous tune, which is elaborated so as to display its most varied timbral and musical possibilities. The Rapsodia Tzigana on “La Campanella” is instead a piece commissioned by the famous organist (and a dear friend of mine) Ivan Ronda. As suggested by its very title, the piece focuses on the Campanella theme (by Paganini/Liszt) and is worked in a rhapsodic form. After a beginning with a free and prelude-like character, the theme evolves (on the stylistic plane) up to the piece’s central section, with an imposing and virtuosic Pedal Solo, until it flows into the concluding final Fugue, whose subject is excerpted from a rhythmic-melodic fragment of the theme itself.

Prelude in memory of Maurice Ravel (2013) pays homage to the memory of the French composer Maurice Ravel (1875-1937). The letters of the name R.A.V.E.L. generate the principal musical material, which is developed according to various contrasting ways, going from the grandiosity up to the vocal-style lyricism and ecstatic meditation. Gothic Dances (2017) is a suite of six organ pieces. Each dance employs harmonies influenced by the Medieval/Gothic music and each is inspired by a painting, an architectural work or a historic figure of the Middle Ages (Piero della Francesca, Charlemagne, Bruegel, Nokter, Antonio da Sangallo).

Ivan Ronda studied under Maestro Luigi Toja at the Giuseppe Nicolini Conservatory in Piacenza, graduating with the highest distinction in piano, organ, harpsichord, choral and orchestral conducting; he also received an honorary diploma of merit on completion of his eighth year of advanced study and went on to attend masterclasses in piano and organ, notably with the great French virtuoso Jean Guillou. Central to his repertory are the great works of J S Bach, Mozart, Reger and Liszt. For the labels Fugatto and Brilliant Classics, Ivan Ronda has recorded several CDs on historical organs (Arlesheim Dom, St. Johanniskirche in Luneburg) as well as for Brillian the Handel’s Complete Organ Concertos transcribed for organ solo by Marcel Duprè. He has toured prestigious venues in the UK, performing at King’s College and St John’s College, Cambridge, St Paul’s Cathedral, Westminster Abbey, Westminster Cathedral, St Chad’s Cathedral, Birmingham and Coventry Cathedral. In 2005, he visited South America, performing in cathedrals and basilicas in Montevideo and Buenos Aires, where his Metropolitan Cathedral recital attracted an audience of 1000 people; his recordings have been broadcast on RAI International and Radio Classica Bresciana. He has been invited to perform on ancient and newly-built historical instruments in important organ festivals. Among the few selected organist to play at Como Cathedral, important composers such as Enrico Pasini, Grimoaldo Macchia, Hans André Stamm, Marco Lo Muscio, Andreas Willscher, Carlotta Ferrari, and Carlo Francesco Defranceschi, have composed and dedicated organ works to him.

Carlotta Ferrari served as chair of music composition at Hebei Normal University in Shijiazhuang, China, and is currently an adjunct professor of music composition at the Department of Arts and Music of ESE, Florence, Italy. Her compositions have been performed in venues such as New York University, Steinway Haus in Hamburg and München, National Center for Performing Arts in Beijing, Universidad de Castilla-La Mancha, St. Gallen Cathedral, Manhattan Central Synagogue in NYC, Basilica di Santa Croce in Firenze, and other relevant theatres and churches. She won the 2nd award at the 2013 edition of Sisì-Frezza competition for women composers held by IFBPW (International Federation of Business and Professional Women) and the 2nd award at the 2018 edition of Opus Ignotum Choral Composition Competition (supported by the Ministry of Culture of the Czech Republic). Ferrari’s music appears on several CD recordings, such as the monographic "Women of History: Music for Organ by Carlotta Ferrari", Carson Cooman, organ (Divine Arts Recordings 2018), and is regularly broadcast on WPRB Princeton and other radios. In 2017, the American Guild of Organists hosted a seminar dedicated to organ music by Carlotta Ferrari at Harvard University. In 2018, the same university commissioned a new Christmas choral song, performed at the 109th edition of the Christmas Carol Service. She has lectured in universities such as La Sorbonne Paris, France, and Bangor University, UK. Her main research interests concern new compositional modal grammars.

Grimoaldo Macchia
He was born in Rome in 1972, began his musical studies at the Arts Academy of Rome. In the context of his generation can be considered an eclectic musician, composer, pianist, organist, arranger and conductor. He graduated in piano and composition with honours at the Conservatory "F. Morlacchi" of Perugia. Also, parallel specialized in studies of organ and conducting. Later he graduated with honours in Music (composition – Applied Music) at the Conservatory of Perugia, under the guidance of M ° Stefano Bracci. His compositions are performed regularly in prestigious places all over the world: Basilika of Weingarten (DE), Marktkirche in Wiesbaden (DE), Fuldaer Dom (DE), Ulmer (DE), Landsberberg Mariä Himmelfahrt, Klosterkirche Engelberg (Switzerland), Uppsala Domkyrka (Sweden), St. Laurenskerk (Holland), Notre Damede Paris, Cathédrale Saint-Étienne, Liverpool Cathedral, Beverley Minster(London), Old South Church in Boston, Basilica of the National Shrine of the Immaculate Conception (USA), Turku Cathedral (Finland), Catholic Cathedral (Moscow), Dunedin City Hall (New Zealand), The Memorial Church HarvardUniversity (Cambridge (Massachusetts), Messina Cathedral, and many others. From1st August 2014 until 31st March 2017 he was principal organist at the Katholische Kirche of “St. George und Zeno” in Arth (Switzerland). Since 1st April 2017, he has been principal organist of the Reformierte Kirche in Birr. In June 2018, he obtained the DAS (Diploma of Advanced Studies) in Sacred Music (Organ discipline) at the Musikhochschule der Künste ZHdK in Zurich. In June 2019 he took second place in the International Organ Composition Competition "Angels of Creation Competition".

Roberto Bacchini graduated with honours at the Pontificio Istituto Ambrosiano di Musica Sacra in Milan with a major in Gregorian chant. At the same institute, he also studied organ with Franco Castelli and Emanuele Vianelli. In June 2014, he graduated at Cremona University majoring in Secondary and High School Music Education. Composer of vocal, instrumental, and choral music, Bacchini published several scores in different genres (sacred, orchestral, chamber, organ, and art songs) with Rugginenti, Sonitus, and Armelin, and a collection of poems entitled “Riflessi” with Nuovi Autori. His music has been performed all over the world by artists such as Giuseppe Ettorre, Piermario Murelli, Barbara Frittoli, Carlo Romano, Ula Ulijona, and Massimo Macrì. Bacchini is the principal organist at St. Provino’s Collegiate Church in Agno (Switzerland) where he plays a Mascioni organ (Op. 682). Since 2006 he has taught Music Education at the Secondary School and Conducting at the Civico Liceo Musicale in Varese. In 2010, he attended a masterclass with Marco Aceti in Varese: “Training, management and organization of music schools”. In September 2013, he completed a one-year training course at the Accademia Giuditta Pasta in Como. Roberto Bacchini performs concert activity with various chamber ensembles and orchestras such as Ensemble Giglio Armonico and Ensemble Cameristi Cromatici.

Stefano Bertuletti. Musically trained at the Diocesan Institute of Sacred Music “S. Cecilia” in Bergamo, in the same city Stefano Bertuletti graduated in Organ and Organ Composition at the Civic Music Institute “Gaetano Donizetti”. Later, he attended organ courses and seminars with H. Vogel, A. Marcon, L. F. Tagliavini, R. Jaud, J. L. G. Uriol, B. Leighton, and C. Stembridge. As a soloist, he performed in important organ events in Italy and abroad. Attentive to the most recent contemporary organ production, at the organ of Notre-Dame de Paris he premiered Variations sur le tantum Ergo by Grimoaldo Macchia and at Basilika St. Martin (Weingarten, Germany) the Weingarten Suite of the same author on the historical instrument built by J. Gabler (1750). Interested in the preservation and protection of the organ-related heritage, he has edited essays and wrote the book “Organi e organari dell'Isola bergamasca”, a commission of the Cultural Association PromoIsola. His compositions are published with Edizioni Carrara (Bergamo), Rugginenti (Milano), Armelin (Padova), Delatour France (Sampzon), Dr. J. Butz-Musikverlag (Bonn), and Bayard-Nizet (Stavelot, Belgium). They are regularly performed by Italian and foreign organists in festivals and concerts. He is organist at Chiesa del S. Cuore in Bonate Sotto (Bergamo).