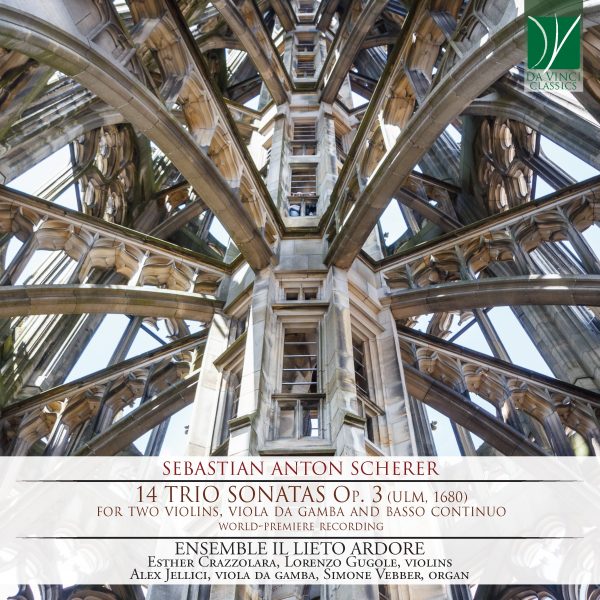 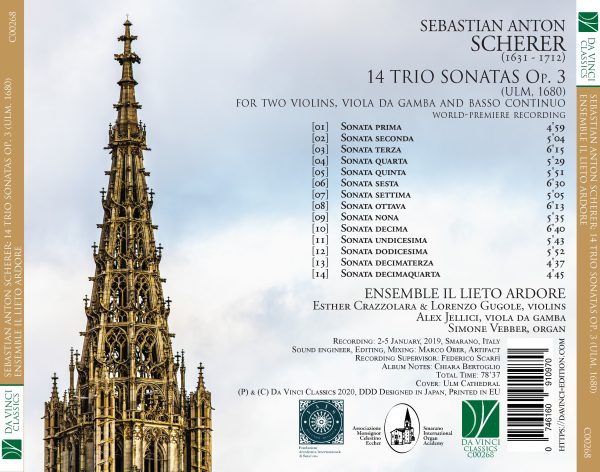 An aerial picture of the city of Ulm, in Southern Germany (today in the Land of Baden-Württemberg) immediately reveals two fundamental landmarks which determined much of its history. On the one hand, the city is gently caressed and surrounded by the great river Danube, which makes a deep bight precisely around it. On the other, towering above a crowd of smaller buildings, the enormous shape of the Cathedral, the Ulm Münster, immediately catches the eye.

This huge and magnificent church had been erected starting in the late fourteenth century, and, singularly, it had been financed and built by the citizens of Ulm, rather than by the church authorities. From then on, the Cathedral had represented the spiritual heart of, and the banner around which the very identity of the city could gather and find itself. And a lively city it was, particularly in the fifteenth and sixteenth centuries, thanks to its strategic position on the banks of the Danube; thus, Ulm became both a flourishing economic and trade center (through which much of the traffics between Northern and Southern Europe were forced to pass) and a cultural pole of attraction, where artists and creatives could find endless opportunities.

At the times of the religious Reformations, Ulm became a Protestant city; the following century saw the devastation of the Thirty Years’ War, after which the city started to decline. In fact, that bloody and exhausting conflict was followed, soon afterwards, by a series of invasions taking place in the first decades of the eighteenth century: the city happened to be an interesting prey for both the French and the Bavarian armies, which fought for it on several occasions during the War of Spanish Succession (1701-1714).

These repeated invasions and battles, and the hardship of living in a once splendid city which was now fighting to recover its grandeur, were the historical framework in which the life of Sebastian Anton Scherer happened to pass. The place where it was spent, instead, was precisely the Ulm Minster, the most iconic symbol of the city. Born in Ulm in October of 1631, Scherer spent most, if not all, of his life, in that same city, where he would die, at the ripe age of eighty, in 1712. His father, Peter, was a baker who came from Alsace. Sebastian must have shown a promising intelligence, since he probably studied at the Latin school of Ulm (where he was taught grammar, Latin and music, among others) and continued his education at the local gymnasium, where he was registered at the age of eighteen. His musical talent was developed under the guidance of the organist of the Ulm Minster, Tobias Eberlin; evidently, the pupil was appreciated both musically and personally by his teacher, since Eberlin gave him his daughter in marriage, and accorded him the privilege of succeeding him in the post of Cathedral Organist. This happened on December 22nd, 1671, so that the freshly appointed organist had to immediately face the heavy requirements of the Christmas celebrations; however, he was by then an expert musician. In fact, already in 1653, at age 22, Scherer had successfully passed an audition in order to become a town musician (in the usual and fascinating dovetailing of civic and religious matters which characterized many musical realities of the time). His exam took place as a public performance, “before and after the sermon”, of pieces of his own composition, which he had had to play “both on the violin and on the organ”. Fifteen years later, his career progressed with his appointment as the Director of Music at the College of Ulm, where his responsibilities included teaching duties relating to the musical education of the Cathedral choir. Later still, in 1684, there is evidence of Scherer’s appointment as an organist in Strasbourg, though the interpretation of this piece of information is currently under debate in the scholarly community; it is likely, in fact, that this was not a permanent job, but rather a kind of honorary appointment with some consultancy duties, since it appears that Scherer did not leave Ulm in order to move to Strasbourg.

While it is likely that Scherer’s compositional output must have been abundant, if one considers the number of liturgical duties he had to perform, unfortunately only a small percentage of what he must have written has been preserved; and most of what we now know about him comes from his printed works. His op. 1 consists of vocal sacred works with instrumental accompaniment, in a style revealing the influence of composers such as Heinrich Schütz and of the Bohemian composer Andreas Hammerschmidt (1611-1675); in spite of being an opera prima, published in 1657 by a musician in his late twenties, they reveal considerable maturity particularly in the word-setting, in the imitative passages and in the combination of instruments. They are also elegantly structured, as they consist of two Masses, three Motets and four Psalms, adding up to the perfect number of nine pieces.

His op. 2 (1664), dedicated to the Collegium Musicum of the city of Memmingen, not far from Ulm, is made of two volumes of organ and keyboard tablatures and scores; interestingly, the first volume had been personally and elegantly etched by the composer, who thus reveals himself also as a patient, skilled and careful craftsman. Volume one consists of tablatures, and comprises thirty-two Intonations, four for each of the eight church modes; the odd-numbered are toccata-like, while the even-numbered are more imitative. The second volume comprises eight Toccatas, each of which is composed of a number of contrasting sections with imitations and pedal points. The structure is strongly reminiscent of Frescobaldi’s Fiori musicali, which had been published some thirty years earlier in Italy; the last intonation pays a further homage to Frescobaldi by citing the Bergamasca theme which had acquired international fame thanks to the Italian organist’s works.

It is however with his op. 3 that we are concerned here, as it forms the object of this Da Vinci Classics production. It is a set of fourteen Trio Sonatas for two violins, viola da gamba or bassoon (they are recorded here in the version with gamba) and continuo, which were published in 1680, when the composer was almost fifty years old. They therefore represent his musical creativity and ingenuity at its best; and while the influences of Italian models are undeniable, they also anticipate some of the later developments of the Italian instrumental tradition (such as those found in the works by Corelli, whose own op. 1 would be published in Rome the following year). Scherer’s collection is dedicated to Christopher Weickmann, the Director of the Collegium Musicum of Ulm, and to the other members of the College. Its preface, by the composer, praises music following the model of Luther’s Frau Musika; music is seen as a creature of God and a symbol for the perfection of Creation. However, Scherer also points out its beneficial effects on human behavior (and even in placating God’s wrath!), while adding that it is the only thing which may comfort the human heart as efficaciously as a glass of wine! Scherer then reveals his friendship and esteem for the musicians of the College, by praising their ability and showing the cordial relationships between them and the Church musicians.

The Sonatas themselves are a series of small gems, exuding the pleasure of making music together. The musical dialogue among the performers is graceful, balanced and brilliant, with intense expressive moments and vivid passages; imitations abound but sound always very natural and spontaneous, also thanks to the frequent use of dance-rhythms, which sometimes modify a previously heard tune thus transforming its nature while preserving some thematic unity. In fact, each of the Sonatas presents itself as an organic whole, where the contrasts in tempo and rhythm give variety to a relatively homogeneous thematic material, thus succeeding in creating a multifaceted and differentiated style while maintaining an internal consistence and coherence. Scherer also demonstrates a fine taste for the balance of the ensemble, managing to involve all parts on an equal footing in the musical texture, and occasionally adding a picturesque touch with echo effects.

In general, while the Italianate qualities are evidently manifested, these Sonatas also reveal a noteworthy and original personality; though the paucity of sources and of published works heavily conditioned the reception of Scherer’s music (along with those mentioned above we only have a funereal work of 1664 by him, commemorating the death of Johann Ludwig Pöckh, together with a couple of manuscripts of sacred music), its quality is of the highest level, and thus the figure of this Baroque musician is worth rediscovering. By listening to these delightful works, we participate in the joy of music-making which characterized the late-seventeenth-century Collegium Musicum of Ulm, and which Scherer commemorated not just by his words, but much more by his music.

Sebastian Anton Scherer: (b Ulm, 3 Oct 1631; d Ulm, 26 Aug 1712). German composer and organist. He spent almost the whole of his life in his native town. He probably studied with Tobias Eberlin, organist of Ulm Cathedral, whom he succeeded on 22 December 1671 and whose daughter he married. He had been elected a town musician at Ulm on 17 June 1653, and it was probably about this time or shortly afterwards that he became assistant to Eberlin. In 1668 he became director of music at the college in Ulm and taught the cathedral choristers. According to Eitner he was appointed organist of St Thomas’s Church, Strasbourg, on 4 November 1684, but, as André Pirro suggested, he only acted as consultant in connection with the organ there: he was in fact organist of Ulm Cathedral for over 40 years up to his death.

Several pieces in Scherer’s op.1 reveal a sensitive and imaginative approach to word-setting. He dedicated his op.2 to the collegium musicum at nearby Memmingen, where he may have had family connections and musical associates. The plan of the publication, half of which is in tablature and half in score, owes much to Frescobaldi’s Fiori musicali (1635), and the last intonation uses the bergamasca theme that Merulo and Frescobaldi had popularized. The volume is not, then, a livre d’orgue in the French manner but a fine collection of sturdy organ music in the Italian manner, full of ingenuity and invention. Some of the trio sonatas of 1680 are of fine quality, and the slow movements anticipate the restrained beauty of Corelli’s sonatas.