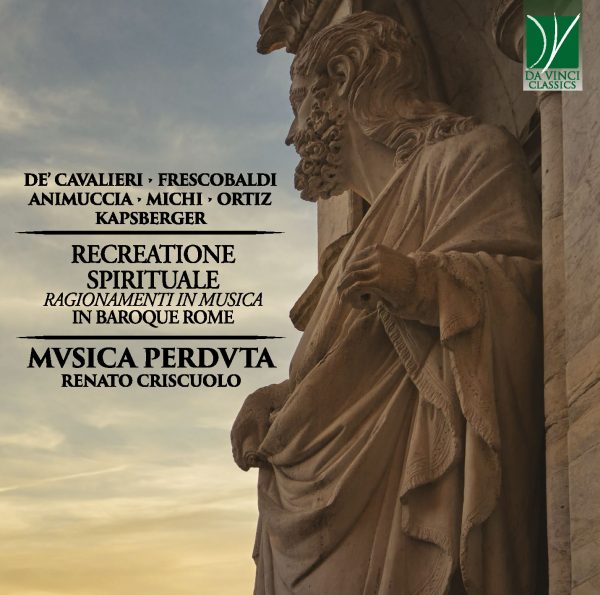 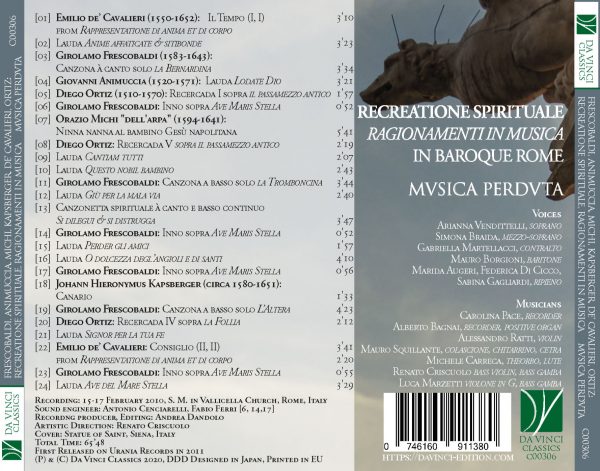 MVSICA PERDVTA is a cultural association founded in 2007 by Renato Criscuolo and Valerio Losito, engaged in research, in libraries and archives, of unpublished or still little known music by eminent authors and composers, mainly from the seventeenth and eighteenth centuries that, despite the talent and the compositional expertise, did not have justice from the history of music and deserve to be reevaluated. Also, the music found is re-proposed in concert, often in the first modern performance, using original Baroque instruments or faithful copies of them. MVSICA PERDVTA has also managed the Spiritual Concerts in the Oratory of San Filippo Neri at the sacristy of S. Maria in Vallicella in Rome from 2008 to 2011 and TodiMusicAntica Festival Paolo Antonio Rolli in Todi, from 2013 to 2017. Among the numerous discoveries of the research group is the double version cantata Mira Lilla gentile by G. F. Haendel, the motet Vos Invito RV 811 and the aria Se fide quanto belle RV 749.32, both by Antonio Vivaldi, three sonatas for cello and basso continuo by Nicolò Porpora and various alternative versions of cantatas by Giovanni Battista Pergolesi, in addition to the rediscovery of minor composers such as Francesco Maria Zuccari. At the organological level, the research group has studied and reconstructed the bass violin, the ancestor the cello, and studied its solo repertoire. The research group organized in 2008 a conference at the Sacred Convent of Assisi entitled Ten Mysterious Sonatas, for the attribution of a splendid anonymous manuscript of sonatas for cello and basso continuo, and, the following year, in collaboration with the University of Rome2 Tor Vergata the conference/concert Around JJ Rousseau, a philosopher musician. The baroque ensemble with original instruments has performed in important Italian and European festivals, among them the Halle Haendelfestpsiele, Musique et Mémoire, Gdańsk Animamusicae, Roma Festival Barocco, Festival Barocco di San Gimignano, Festival of Pietà deìTurchini in Naples, Signs Barocchi, MusicaSibrii and others. The ensemble has six recordings for the labels Brilliant Classics, Urania Record and Da VInci most of which contains unpublished works found by the research group. MVSICA PERDVTA has released a CD for Classic Voice Classic Antiqua (No. 5 around the Oratory of San Filippo Neri) and music for the I-phone application "i-MiBAC -Top 40": the first of a series of applications mobile telephony, multi-issue and free, dedicated to cultural heritage, issued by the Ministry for cultural heritage and activities. He has collaborated several times with the Handel House in London for the performance of music by the great Saxon composer.

Diego Ortiz: (b Toledo, c1510; d ?Naples, c1570). Spanish theorist and composer. He was at Naples by 10 December 1553, when he dedicated his Trattado de glosas to the Spanish nobleman Pedro de Urríes, Baron of Riesi (Sicily). This work appeared simultaneously in Spanish and in an Italian version full of hispanicisms suggesting that Ortiz served as his own translator. If so, he must already have spent an extended period in the part of Italy under Spanish rule.

By February 1558 Ortiz was maestro de capilla of the viceregal chapel maintained at Naples by Fernando Alvarez de Toledo, 3rd Duke of Alba and Spanish Viceroy from 1556 to 1558. In 1565 he was still maestro de capilla to the conservative Pedro Afán de Rivera, Duke of Alcalá, Alvarez de Toledo’s successor as Spanish Viceroy (1559–71) to whom he dedicated his Musices liber primus. A book of masses promised in the preface to this work never appeared.

The Trattado de glosas, or ‘treatise on the ornamentation of cadences and other types of passage in the music of viols’, is the first printed ornamentation manual for the player of bowed string instruments. It teaches neither how to improvise nor how to add ornamentation at sight, but provides numerous written-out ornaments fitting exactly prescribed time limits. The player is told in book 1 to inspect the dozen or more ornamented variants provided after each simple cadence or passage, to choose the most apt and to write it into his part at the appropriate place. The accidentals shown in the simple cadence are to be retained in whatever ornamented variant the player selects. The second book begins with four solo recercadas (studies) for bass viol, followed by six recercadas on the bass La spagna in which agile tenor-clef counterpoints for violón are accompanied by keyboard harmonizations of the theme. Next come four recercadas (ornamented versions) of Arcadelt’s four-voice madrigal O felici occhi miei for viol and keyboard, followed by four of Pierre Sandrin’s four-part chanson Douce mémoire. Book 2 concludes with eight recercadas for bass viol and keyboard over passamezzo basses. Neither book quotes any distinctively Iberian air. Ortiz’s preoccupation with bowed rather than plucked instruments contrasted with contemporary Spanish preference. The sole 16th-century peninsular manuscript that cites his ornamentation formulae is a Portuguese keyboard source (P-C Mus.242), not a Spanish viol source.

The hymns, psalms, Salves and alternatim Magnificat settings of Ortiz’s Musices liber primus, for four to seven voices, are without exception based on plainsong. Although one setting of Pange lingua gloriosi quotes a Spanish chant, few other native traits are evident in the collection. His use of accidentals (the same note may be unaltered in one verse and sharpened in the next) agrees with Infantas’s treatment of plainsong cantus firmi in Plura modulationum genera (1579). In his dedication Ortiz encouraged the Spanish predilection for accompanying sacred polyphony with instruments. In his preface he referred to Ockeghem, Josquin Des Prez and Mouton as the ‘true doctors of music’, a view in accord with the conservative style of his compositions, which show the distinctive influence of Morales.

A five-part funeral motet, Pereat dies (ed. H. Eslava in Lira sacro-hispana, Madrid, 1869), is not in the book of 1565 and may be by another Ortiz, like the three long six-part motets of I-Rvat C.S.24, copied in 1545. Vicente Lusitano, the probable author of an anonymous treatise (ed. in Collet), mentioned a Missa ‘L’homme armé’ by ‘Ortiz’. Two intabulations in Valderrábano’s Silva de sirenas(1547) are ascribed in that collection not to Diego but to Miguel Ortiz.

Giovanni Girolamo Kapsperger (b ?Venice, c1580; d Rome, Jan 1651). Italian composer, lutenist, theorbist and guitarist of German descent. (He seems to have used the spelling ‘Kapsperger’ rather than the ‘Kapsberger’ favoured by German scholars.) His father, Colonel Guglielmo Kapsperger, was a noble military official with the Imperial House of Austria and may have settled in Venice. Kapsperger was in Rome soon after 1605, where through his reputation as a virtuoso and his status as a nobile alemano he moved in the circles of powerful families such as the Bentivoglio and the Barberini. Other supporters in Rome included the Orders of S Stefano and S Giovanni and the academies of the Umoristi and the Imperfetti whose members arranged for the publication of his works; the academies Kapsperger organized in his house were described as among the ‘wonders of Rome’. Around 1609 he married the Neapolitan Gerolima di Rossi, by whom he had at least three children. In 1612 his Maggio Cantata, dedicated to the Grand duchess Maria Maddalena, was performed in Florence at the Palazzo Pitti.

In 1622 his Apotheosis, on Jesuit themes, was performed at the Collegio Romano on the canonizations of the first two Jesuit saints, Ignatius Loyola and Francis Xavier; the most elaborate musical production in Rome before the Barberini operas, it marked the period of Kapsperger's deepening relationship with the papal circle. In 1624 his settings of verses by the newly-elected Pope Urban VIII Barberini were published as Poematia et carmina, which G.B. Doni forwarded enthusiastically to Mersenne. In the same year Kapsperger entered the service of Urban's nephew, Cardinal Francesco Barberini, where for 30 years he worked alongside Frescobaldi, Luigi Rossi, Domenico Mazzocchi, Stefano Landi and Doni, and collaborated with the poets Ottavio Tronsarelli, Giovanni Ciampoli and Giulio Rospigliosi (the future Pope Clement IX). His son Filippo Bonifacio also joined Francesco's household. Doni wrote that Kapsperger's music was often sung ‘in the chamber of His Holiness’ and in 1626 and 1627 his masses were performed in the Cappella Sistina at Urban's request. Later, Doni denounced Kapsperger for attempting to replace Palestrina's music with his own at the Sistine Chapel, an allegation uncritically accepted by Hawkins and Ambros (and effectively contaminating Kapsperger's later reputation); Baini, however, remained sceptical of Doni's story and no such incident is documented, although other contemporary accounts describe him as an extraordinary talent but opportunistic, unco-operative and vainglorious. Kapsperger continued as a salaried member of Francesco's household until the death of Urban in 1644 and the dissolution of Francesco's establishment in 1646. Curiously, only two of his works were printed after 1633, when Allacci published an inventory of Kapsperger's music that included the titles of many additional collections that he was preparing for publication. Kapsperger died in 1651 and was buried in the church of St Blaise outside Rome.

Girolamo Frescobaldi: (b Ferrara, bap. mid-Sept 1583; d Rome, 1 March 1643). Italian composer and keyboard virtuoso. He was one of the greatest keyboard composers of the first half of the 17th century.

Orazio Michi (b Alife, nr Caserta, 1594–5; d Rome, 26 Oct 1641). Italian composer and harpist. He was probably trained in Naples, but the earliest document of his life comes from Rome, where in February 1613 he joined the household of Cardinal Montalto, whom he served until the cardinal’s death in 1623. In February 1614 Michi played the harp in performances of the pastiche opera Amor pudico, which celebrated the second marriage of Cardinal Montalto’s brother, Michele. By 1620 Michi was the most highly paid of Montalto’s many famous musicians. In 1622 the cardinal established an annual pension of 300 scudi for him, made up of income from two of the cardinal’s abbeys, and in his testament Montalto left Michi an additional pension of 2000 golden scudi a year, an income worthy of a cardinal.

After Montalto’s death Michi passed into the household of Cardinal Maurizio of Savoy, whom he served until February 1630, possibly returning briefly from 1636 to 1638. He received additional patronage from Cardinals Pallotta, Bernardino Spada and Antonio Barberini. In 1639 André Maugars estimated Michi’s income at 5000–6000 silver scudi. In his testament Michi disposed of a carriage with horses, an organ, a harpsichord, a theorbo, a harp, a large library, a ruby that once belonged to Cardinal Montalto’s mother and 858 scudi in cash. His principal beneficiaries were the fathers of the scuole pie and the Oratorio di S Filippo Neri, for which he composed many sacred arias and cantatas during the last two decades of his life.

Michi was praised as a player of the double harp by Vincenzo Giustiniani in 1628, André Maugars in 1639, Pietro della Valle in 1640 and Severo Bonini in about 1650. His extant works number almost 100; most of these are in two Roman libraries (I-Rc and Rn) and a smaller number elsewhere in Rome (I-Rvat), Bologna (I-Bc) and Prague (CZ-Pnm). Five were published by Vincenzo Bianchi in Rome (RISM 16402). Like several other composers in Montalto’s household, Michi wrote works in which distinct sections of aria and recitative styles are set in opposition. There are in all 21 of these, 13 of which set canzonetta texts, often using only one strophe. One such is of Francesco Balducci’s Perdan quest’occhi il sole, which contains several different patterns of verse, each of which Michi sets in a contrasting style. Similar contrasts correspond to changes between versi sciolti and metrical verses in Michi’s setting of the anonymous Empio cor, core ingrato. These and other similar works are among the earliest that can be called cantatas according to the strictest modern definitions of the term. Of a high artistic calibre, they became important models for Luigi Rossi and other cantata composers in the Barberini household after Michi’s death.